Since the middle of May, I’ve been using the Seattle Metropolitan Area as my “temporary home base.”

Shortly after arriving, I flew to Las Vegas to take care of some errands after a long journey through South Dakota, Montana, and eastern Washington. Af­ter returning and resting up for a week and a half, I set off on the Canadian leg of my road trip.

Immediately upon my return, I petsat, then for the next few months, I rotated around visiting and staying with Doug at his house, exploring the Seattle suburbs, doing more petsitting, spending time with friends, and flying out of SEA to get to places I needed to be, including two more Las Vegas trips and a visit to TwitchCon.

Now, five months later, I’m ready to set off on the next—and potentially final—leg of my transcontinental road trip.

Earlier today, I arrived in Yakima, a city in south-central Washington. I was considering going from Seattle southbound alongside the Pacific coastline, but I still hate California, and I want to avoid Portland at all costs now after what has happened to it in the past few years. (I’ve also already been to Port­land; this was before it got really bad and it was still a bit underwhelming.)

Instead, I decided to route myself through southern Idaho and back across Utah, then stop by Las Vegas again on the way to living at the Tempo facilities in Long Beach, California for the winter again like I did last year.

Here is how my progress is looking so far: 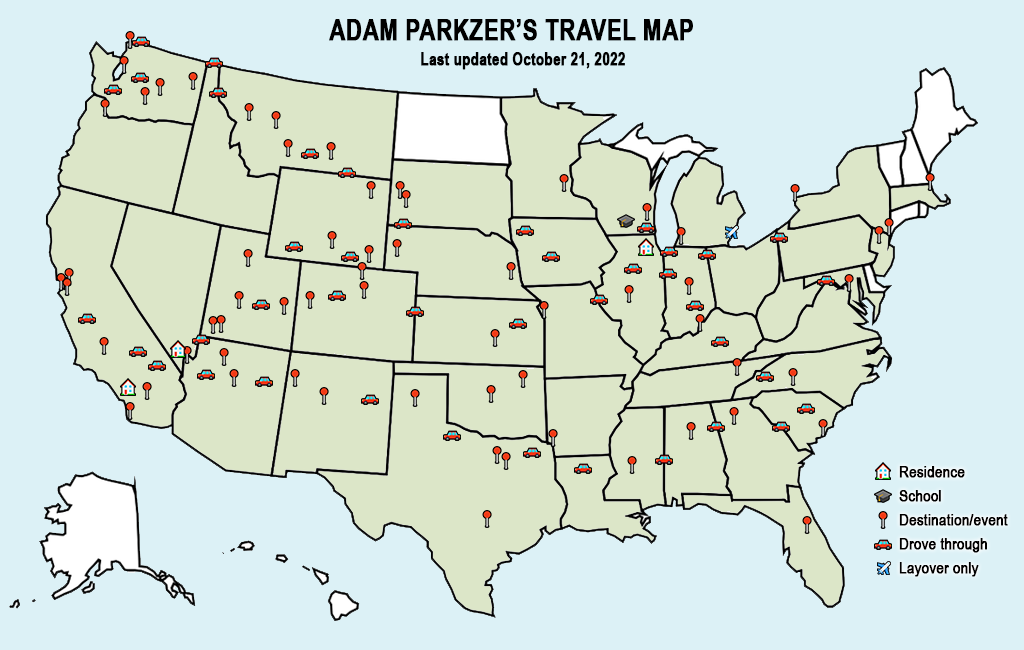 Having spent so much time in and around Seattle, there were a lot of photos I took, many of which I published on my website in their dedicated blog posts. However, some were publication-worthy but never made it online. I figured this round-up post would be a good place to share some of my final shots from the Seattle Metropolitan Area.

I think a nice place to start is the Seattle-Tacoma International Airport. Throughout my road trip, whenever I needed to fly somewhere, I would park my vehicle at the local airport, take care of business, come back round-trip, then pick up my truck and continue on my road trip. Sometimes, I would end up in very small airports and have to take inefficient flight paths to get where I needed to go, but SeaTac’s great coverage made travel very easy while I was there. 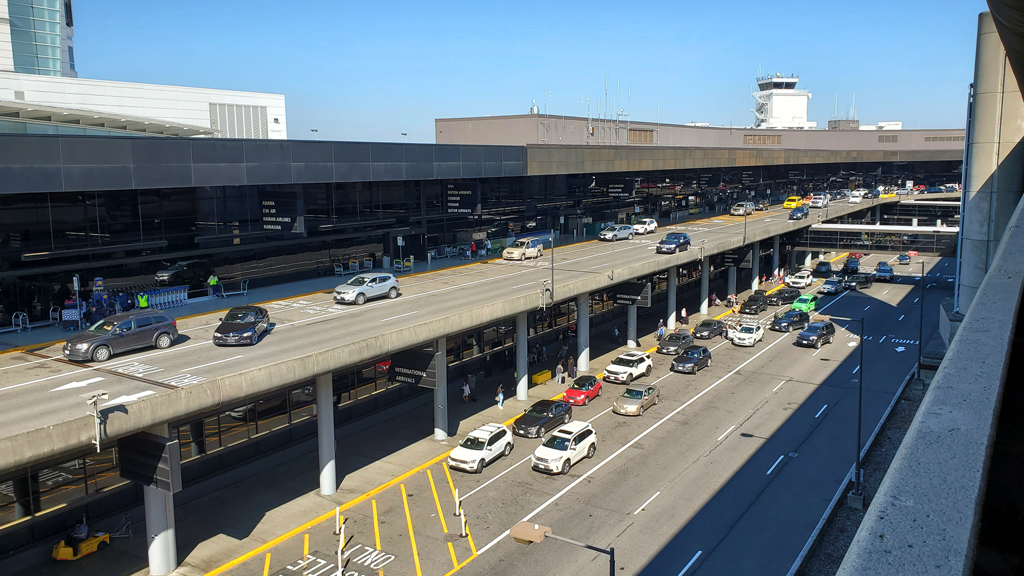 Back in July, Tempo Games filmed an orchestral performance for The Bazaar. I play a ton of different instruments, including the piano and cello, and I’ve been a fan of music in performance ever since I was a little kid, so it was nice being able to stop by to watch and listen to the musicians. 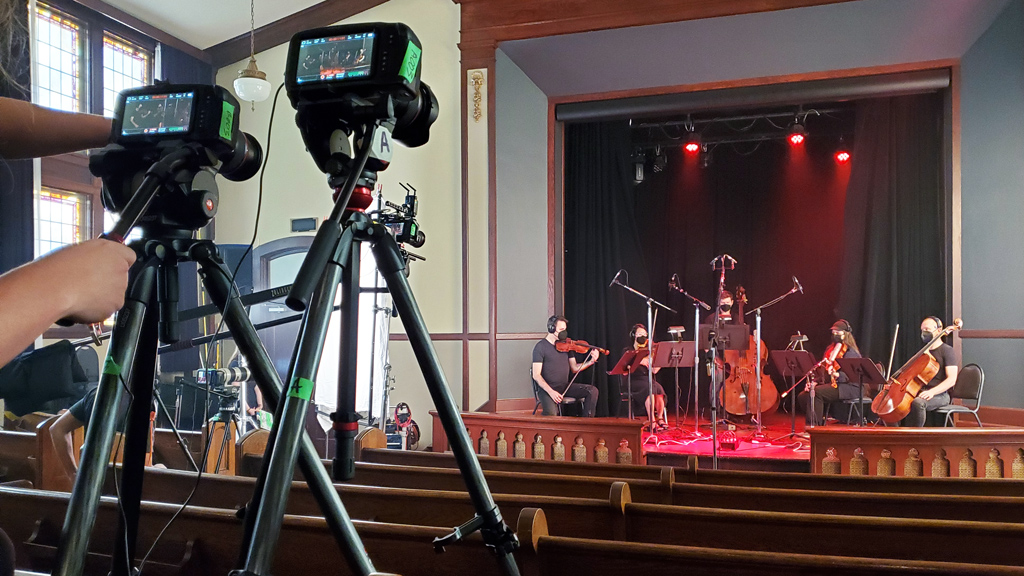 Even though I spent a very large amount of time in the Seattle Metropolitan Area, I don’t actually really like it here that much (I only stayed here for this long because I have a lot of friends and co-workers who live here, so there was a lot for me to do).

The suburbs aren’t as bad, but I think the local Seattle government has devolved into a dangerous echo chamber of extremist liberal viewpoints. My per­sonal belief is that a balance of government is critically important to properly run a city. A diverse governmental structure encourages discussion and de­bate of differing perspectives, which is conducive to considering all the possible options and selecting the best one, rather than one party’s mission snow­balling unmanageably out of control.

With that being said, if I was absolutely forced to live in the Seattle Metropolitan Area, the place I would pick is Bellevue.

Downtown Bellevue is an amazingly-planned city. It has ample parking, yet still, many interesting things are all within walking distance. It is very well-maintained and clean, the environment is upbeat and welcoming, and it is clear that there is still ongoing development to make it even better.

I like the idea of living in a downtown area, but in a practical and realistic sense, I hate almost all of the actual downtowns. This is why I lived on the Las Vegas Strip instead of downtown Las Vegas—it was sort of an “artificial” downtown where it had the bustle and allure of what a downtown area would be, but without the downsides. Downtown Bellevue is sort of like a Las Vegas Strip, but for business professionals and normal people (as opposed to tourists coming to gamble and drink way too much alcohol).

While visiting downtown Bellevue, I stayed at three different hotels, including The Westin Bellevue and the Courtyard Seattle Bellevue/Downtown. The third, which was my favorite, was the W Bellevue. 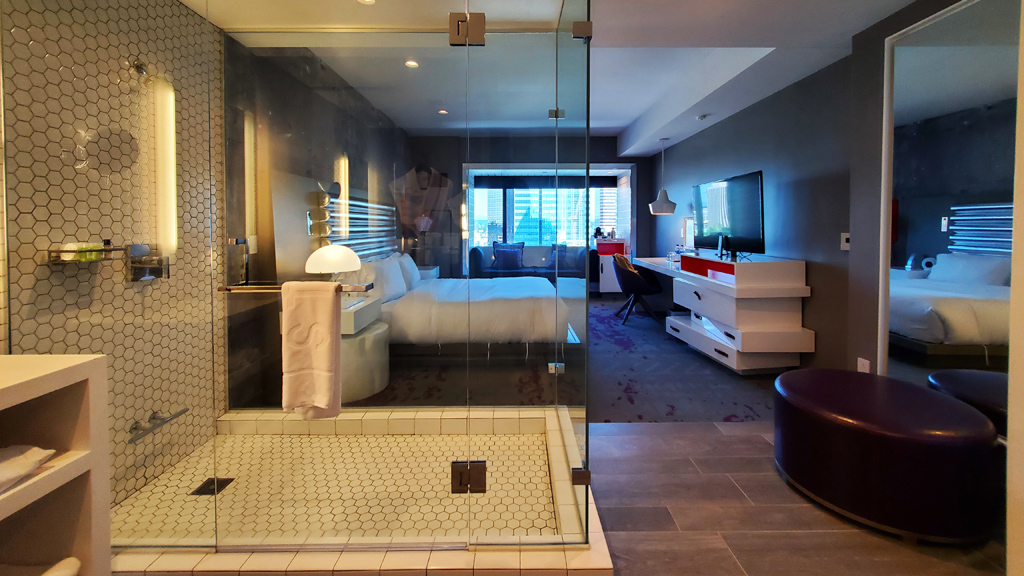 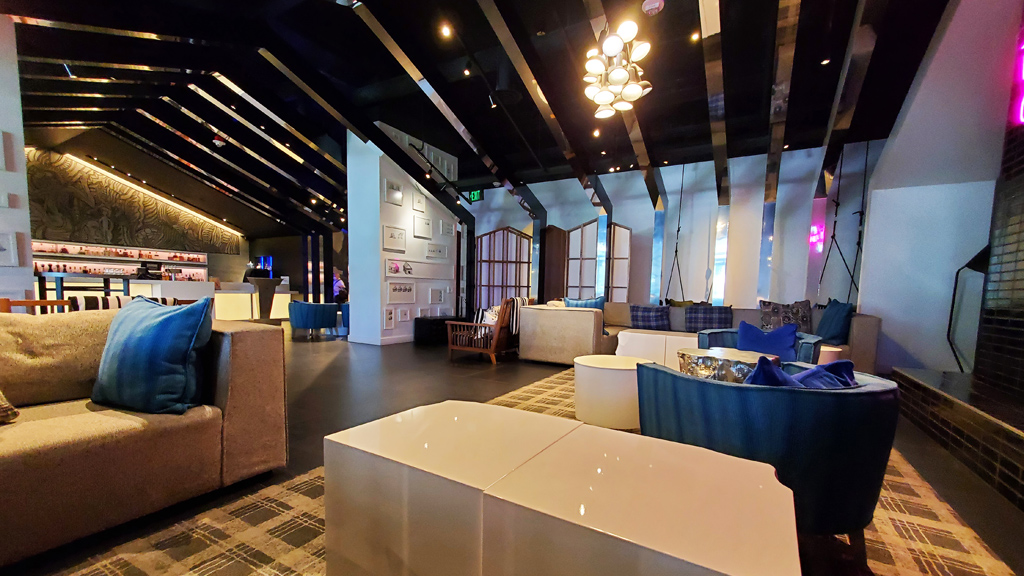 Funny enough, I’d say my favorite part of this hotel was the fitness facility. It was the largest and nicest hotel gym I’ve ever seen, and it literally even has a lounge area in the center to rehydrate and rest up between sets or after your workout. There was some very unique weight machines that I rarely ever see at other gyms, and it even had a punching bag. 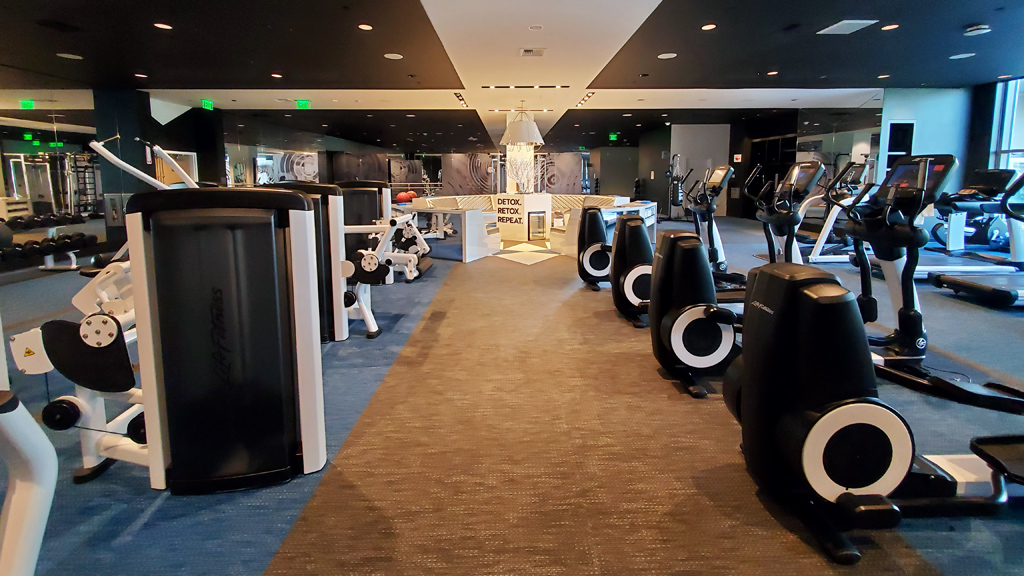 I stayed at the W on a few separate occasions throughout the past five months, so I got to experience a few different rooms on all sides of the building—both with a Lake Washington view, as well as a city skyline and suburb view. 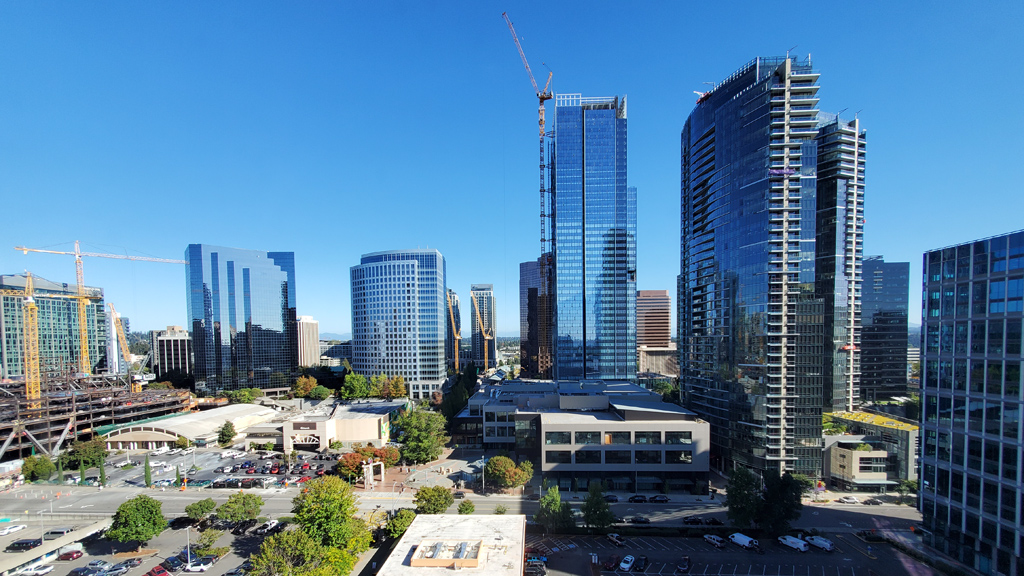 While in Seattle, Doug introduced me to his friend Dani, who is the owner of Mina the cat. Before those pictures were taken, we walked around Vol­un­teer Park. Unfortunately, we mistimed our trip and it was dark by the time we had arrived, so I don’t have many good photos, but I did capture one after we had climbed to the top of the Water Tower Observation Deck.

It’s very grainy because I zoomed in on the Seattle skyline and it was dark outside, but after enhancing some of the raw camera sensor data, it was able to extract a lot of texture from the sunset and clouds, which I thought looked interesting. 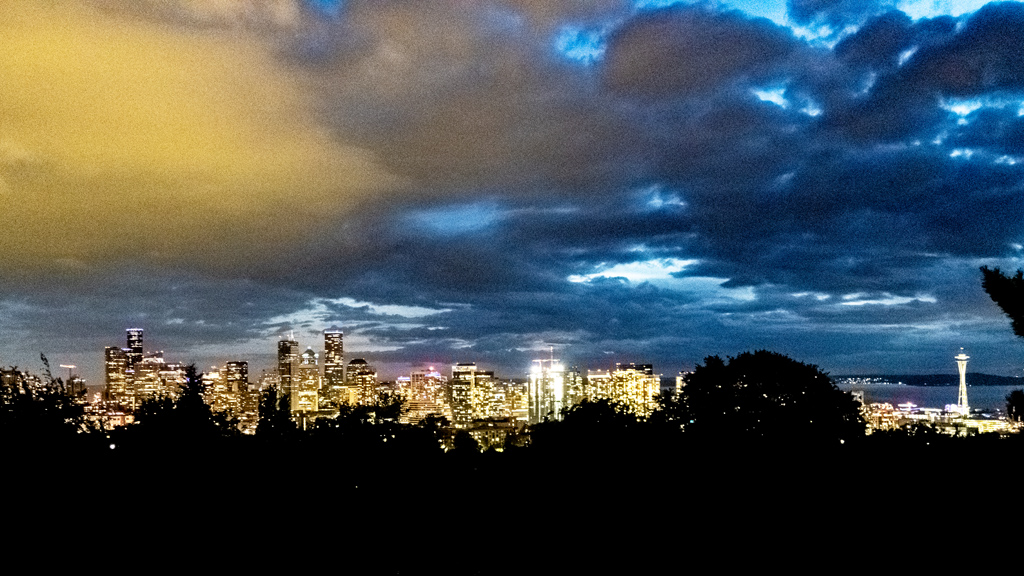 Tacoma is generally seen as the more dangerous part of the Seattle Metropolitan Area. However, having survived walking through Capitol Hill in down­town Seattle, I felt confident that I was fit for Tacoma, so I scheduled a visit and explored the city for a little under a week.

I’m not sure if it was just because I stayed mostly around the touristy areas along the water, but I thought Tacoma was actually pretty nice. I was lucky in that I got a corner hotel room on the 20th floor so I had great 180° views, but the location of the hotel was also convenient so I got to walk to most of my exploration activities instead of driving. 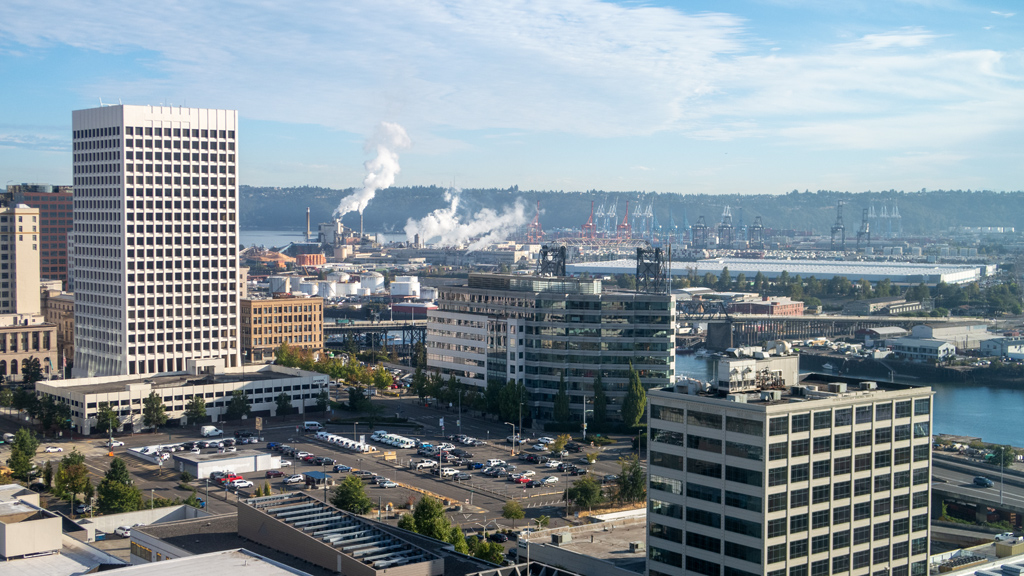 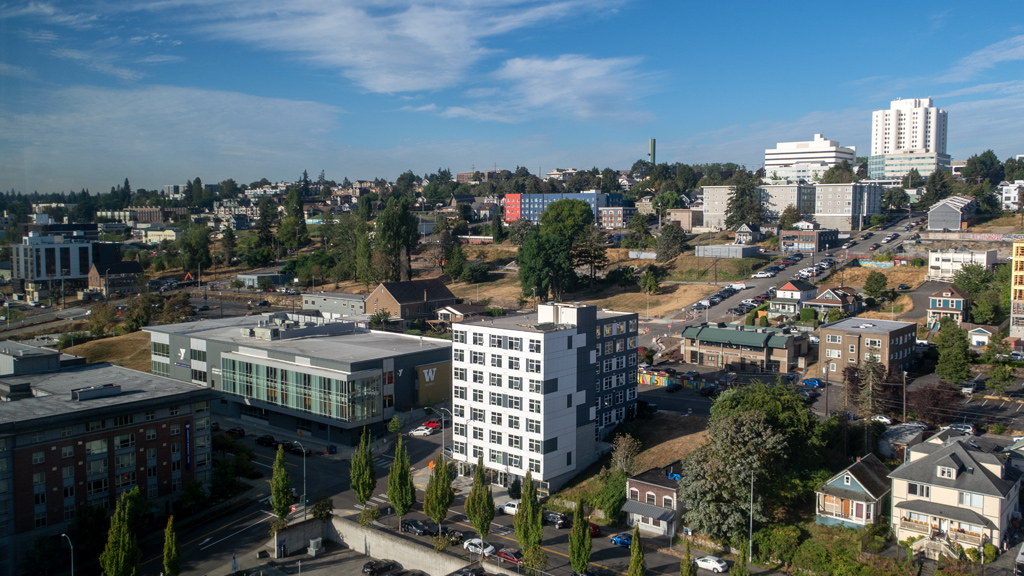 And finally, I already have three blog posts featuring photos of Drake, Kaya, and Bullet, the three animals I’ve petsat on multiple occasions while I was in town, but here are three more, one of each, to close out my trip. 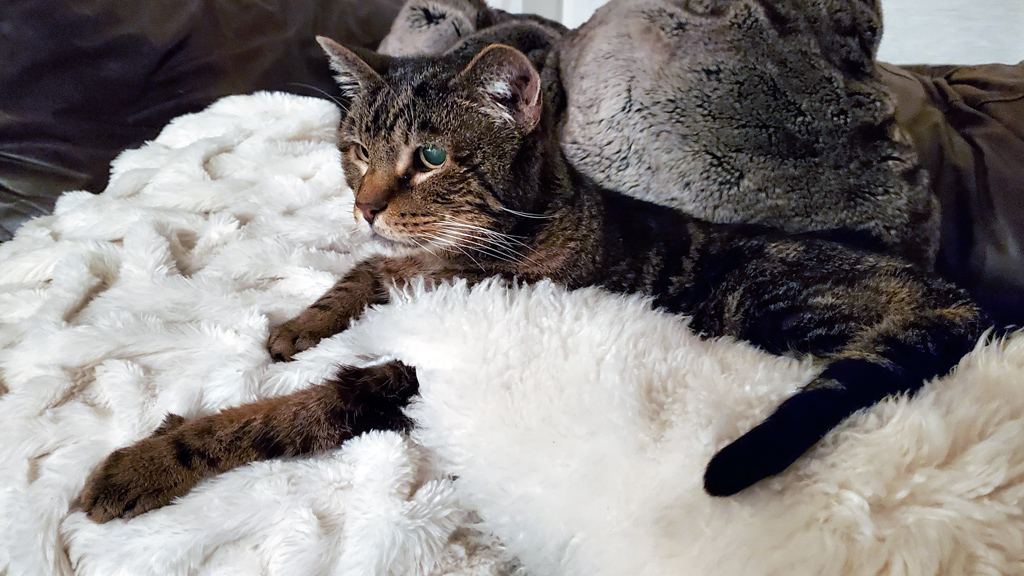 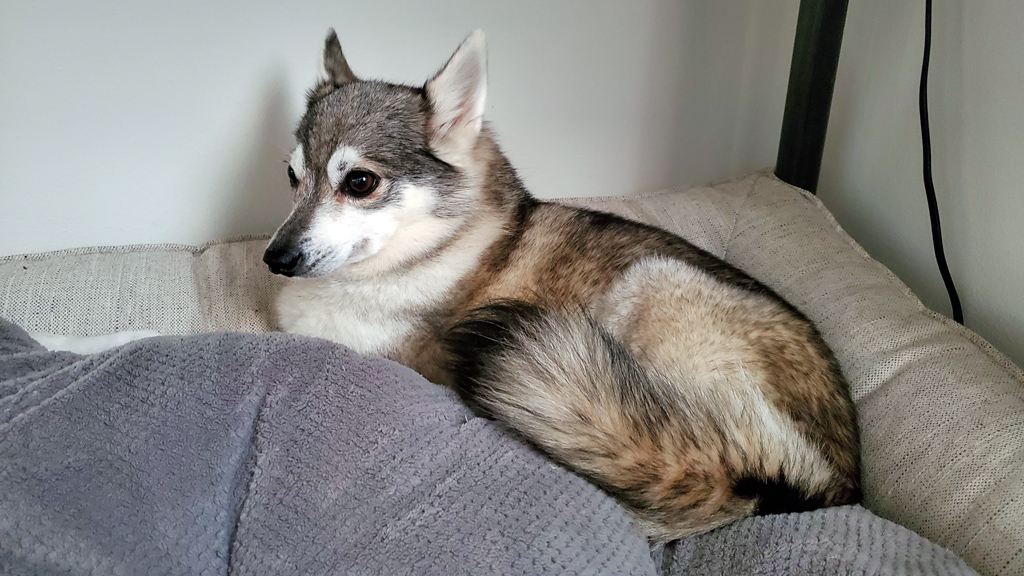 The drive to Yakima was only about two hours, but it was nice being back on the road, driving through mountains and sightseeing new areas. More to come soon…