After wrapping up my trek through Utah, I cut through the northwestern corner of Arizona on my way to Southern California for the winter.

This stretch of I-15 from Mesquite, Nevada to St. George, Utah, known as the Virgin River Gorge, was the first time I had ever driven through a moun­tainous area back in June 2021 when I first started my long road trip journey. The views were stunning, the road was hugged by cliffs on both sides, and it literally felt like the intro to the wild movie my life was about to be for the next year and a half.

Because of the route I took, I returned to Las Vegas last winter from the southeast via U.S. Route 93. However, this year, because I came back from Utah, I got to drive the Virgin River Gorge in the opposite direction, as if concluding my “movie” and wrapping it up full circle. 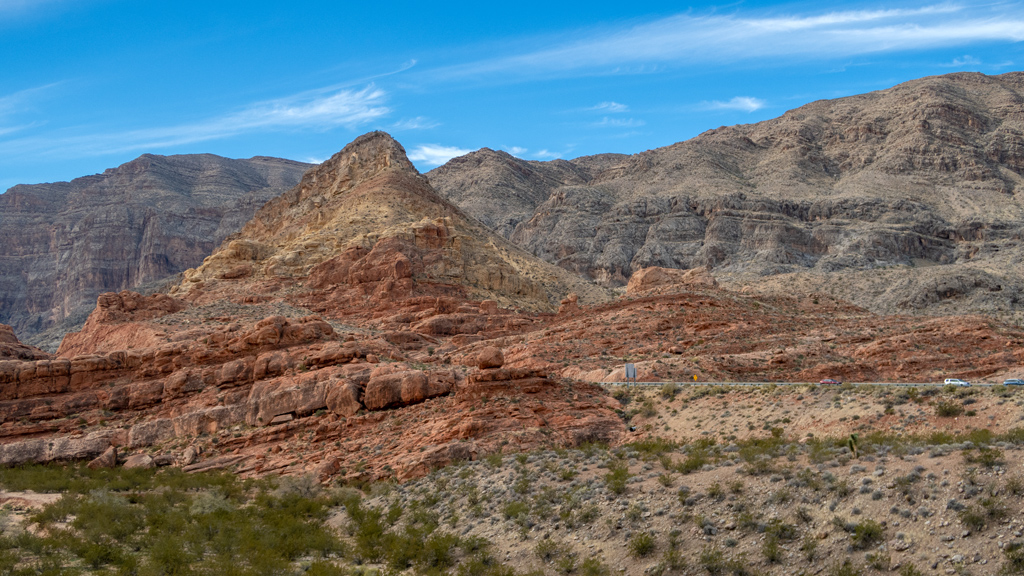 Because of the time zone difference be­tween Utah’s Mountain Standard Time and Nevada’s Pacific Standard Time, I had an additional hour to spare in between check-out time in St. George and check-in time at Lake Las Vegas. I decided to use this time to make a stop at the Virgin River Canyon Camp­ground to go for a quick walk and take in the views. 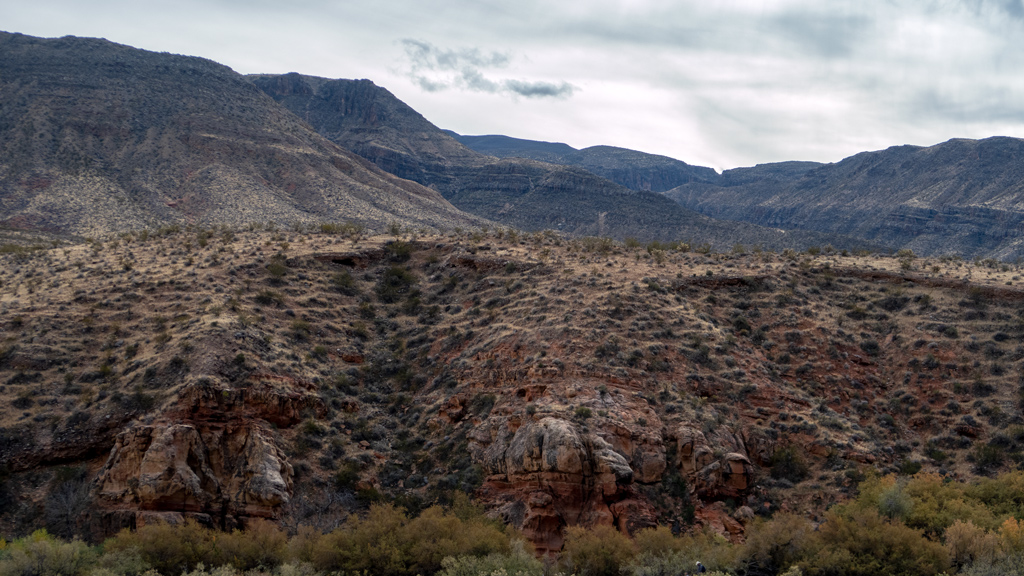 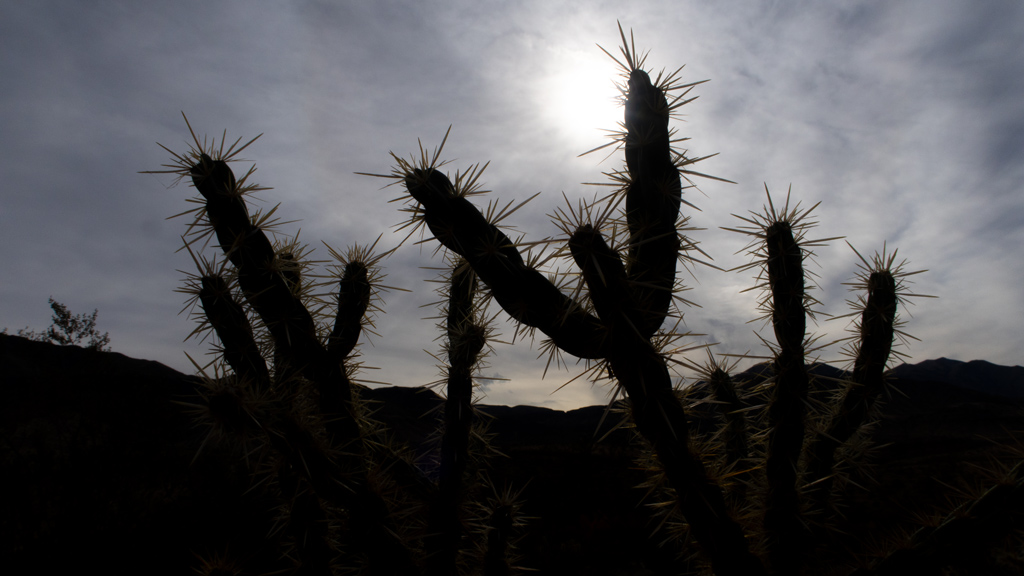 I parked in an open spot on the western camping area and headed southwest down Sullivan’s Canyon Trail. 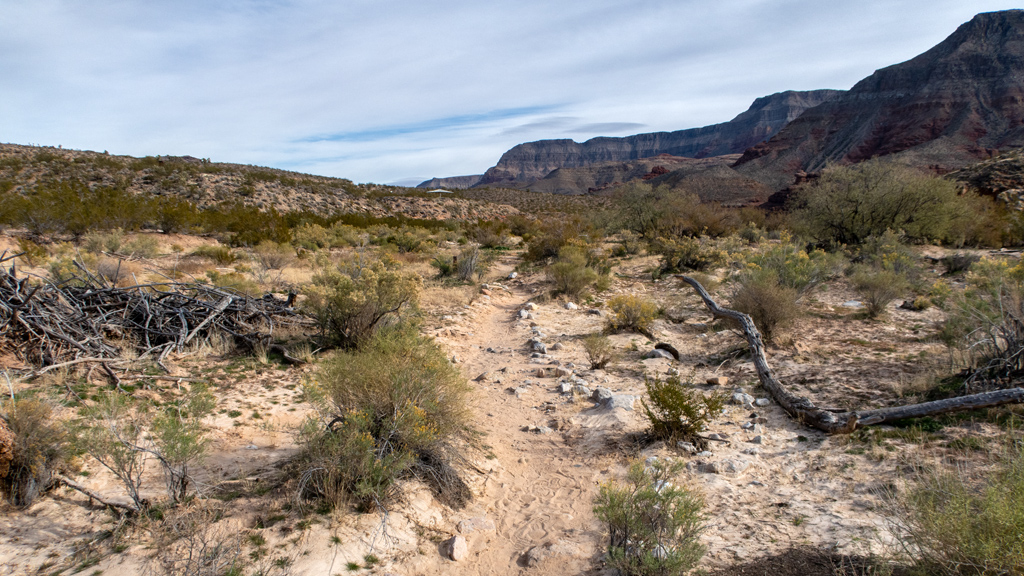 I went down to the base of the hill before deciding to cut my walk short after realizing that the Sullivan’s Canyon Trail intersects the Virgin River. I was wearing long pants and regular boots, and I didn’t want to get wet, so I snapped a photo of the river and turned around. 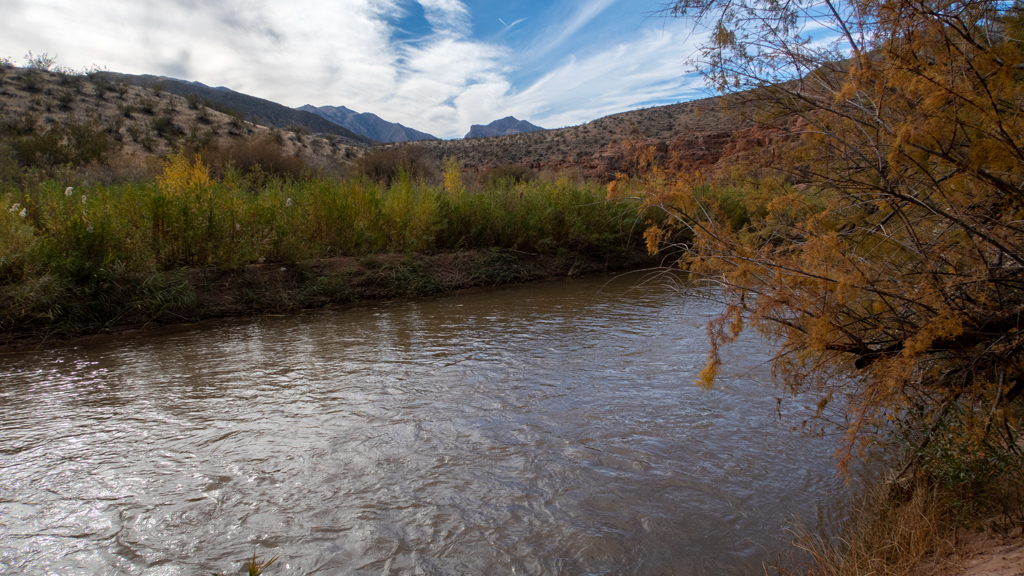 Before continuing the rest of the way to Nevada, I snapped a photo of my truck with the mountains serving as a nice backdrop. 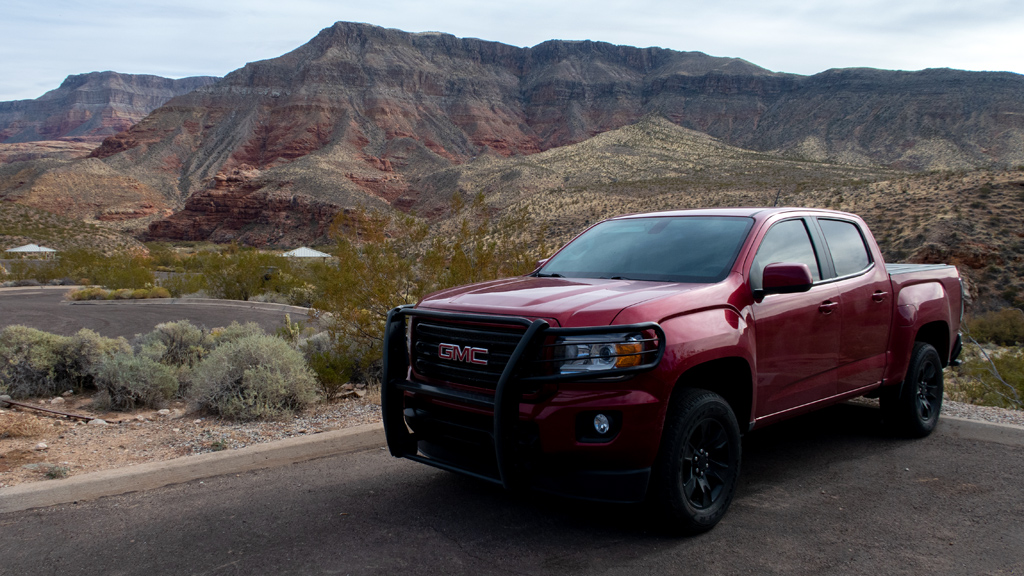 My hotel in the Las Vegas Valley was The Westin Lake Las Vegas Resort and Spa in Henderson, Nevada. They were kind enough to upgrade me to one of the suites facing east towards the lake. The suite itself wasn’t exactly the best maintained, and it had a bit of a mildew smell, but I had gotten the room at a discounted rate to begin with, so I was just appreciative of the fact that I was given a free upgrade anyway. 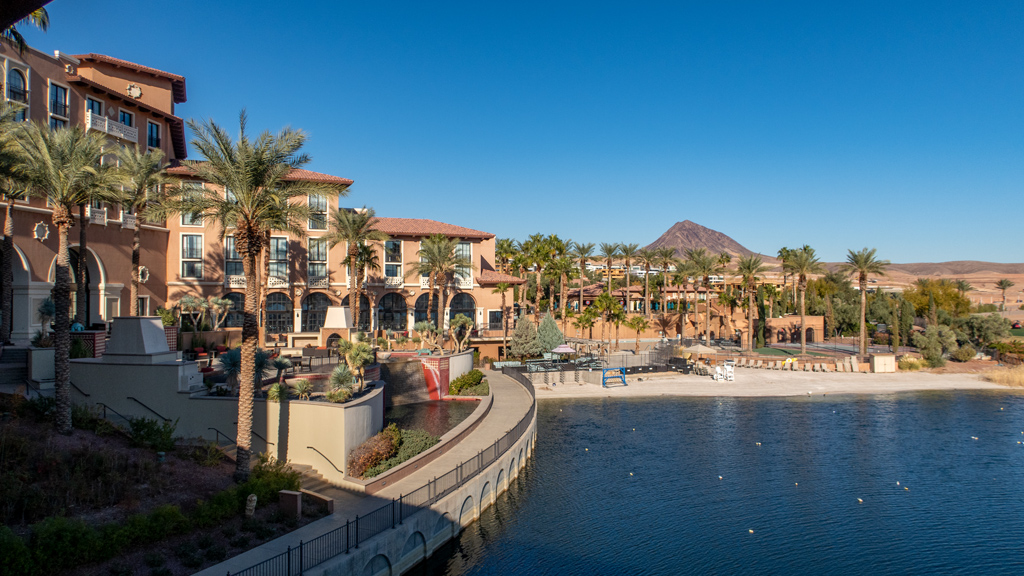 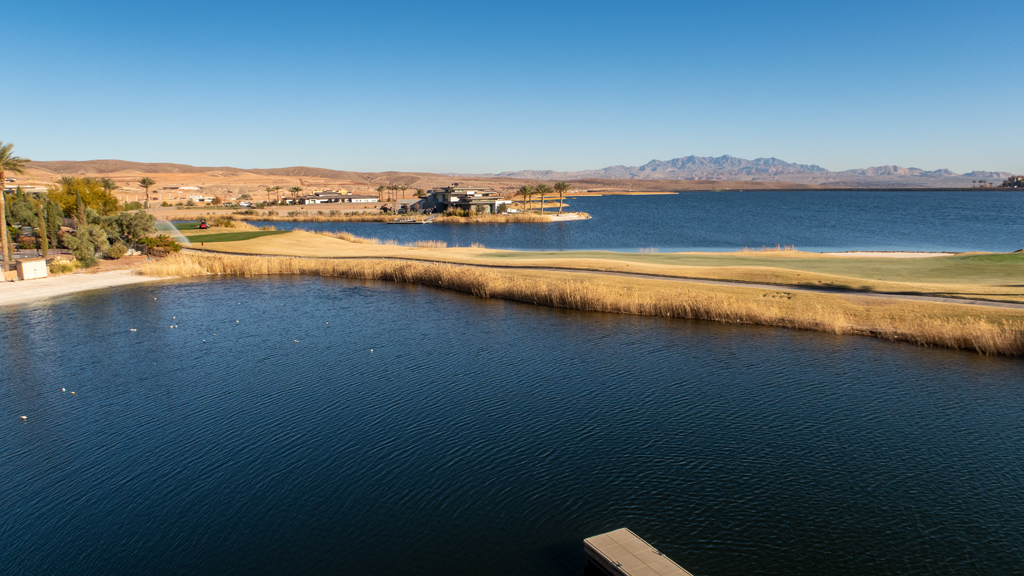 After attending the final class for my Continuing Education management certification at the University of Nevada at Las Vegas, checking my PO box, ex­changing some belongings in my storage unit, getting a haircut, stopping by the dentist for a routine cleaning, and taking care of all my other errands, an­other successful Las Vegas trip came to a close, and I continued southbound on Interstate 15 for Southern California.

Of course, it wouldn’t be California without a clown fiesta of traffic. I found myself in a construction zone in the middle of the desert where about two lanes’ worth of road was barricaded off due to construction. This area of the highway also had no right shoulder.

There was a collision.

Traffic was backed up for literally several miles. Emergency medical services couldn’t get through because there was bumper-to-bumper traffic and there were no shoulders on either side of the interstate. The travel lanes were so narrow that, even if the drivers were coordinated enough (which, in the U­nit­ed States, they’re not), they wouldn’t even be able to hug one side of their lane to make enough space in the middle for an ambulance.

First responders ended up having to off-road in order to bypass the traffic, which looked terrifying, because they were basically driving at almost a 45° an­gle and looked like they were about to tip over and roll into the ditch. Because the number of lanes were already reduced due to construction, eve­ry­one had to funnel into the single right-most lane in order to drive past the site of the accident. This segment alone added almost an hour to my drive. 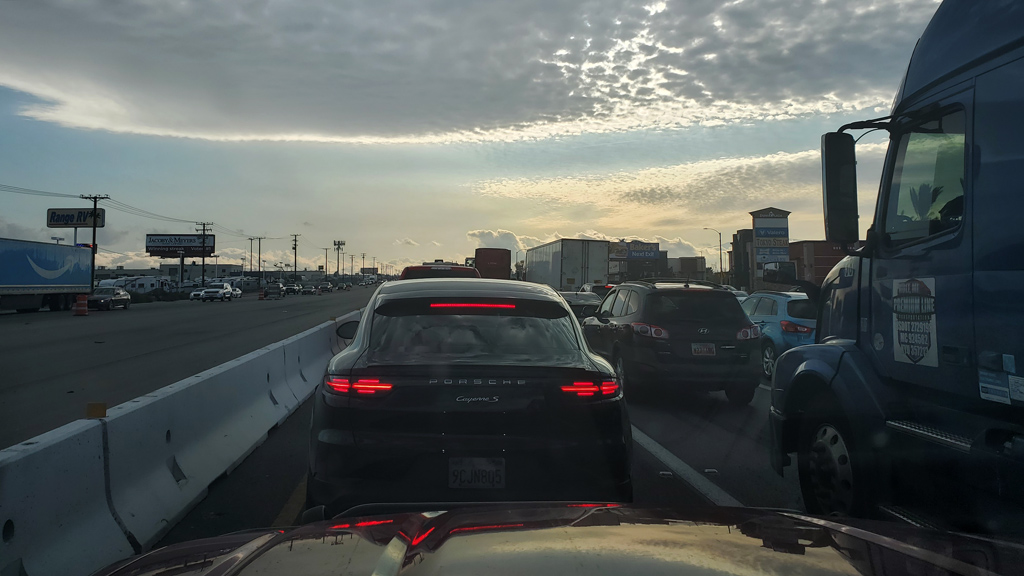 With that, I’ve completed my third big loop of my road trip (or second, depending on how you look at it)—the first being the horizontal one taking me as far east as South Carolina, the second being the vertical one across the Mountain States and up to the Seattle Metropolitan Area, and the third being a small one through western Canada that was appended onto the second loop.

As it stands now, I have step foot in (or, in the case of a very few, just driven through) 41 of the 50 states in the United States of America. The only ones I have left now to visit are Alaska, Hawaii, North Dakota, Maine, New Hampshire, Vermont, Connecticut, Rhode Island, and Delaware. 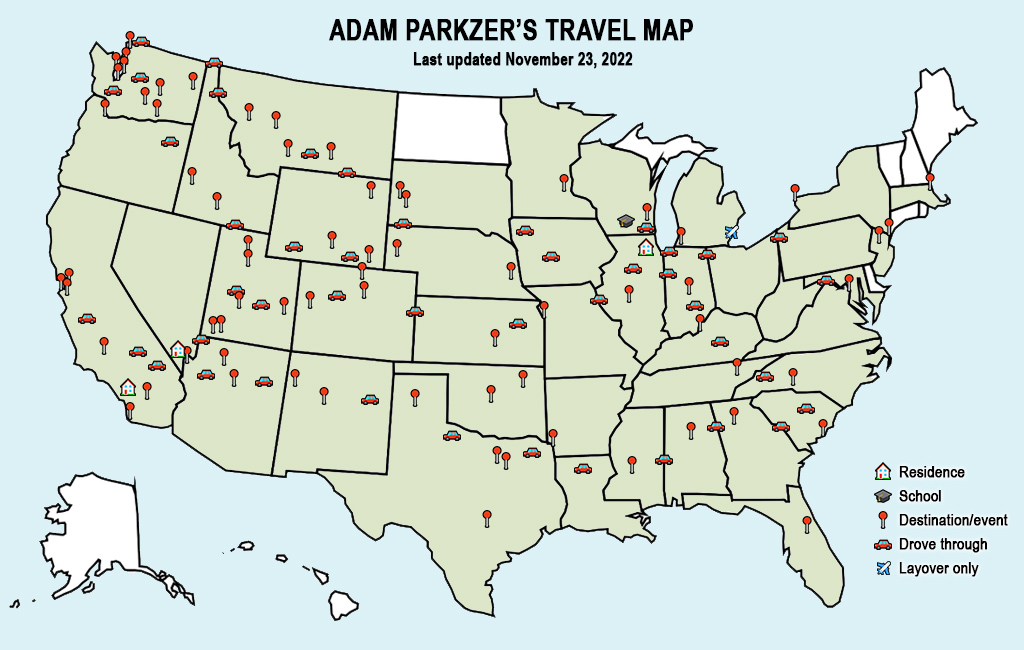 I’m in Southern California now, at Tempo‘s hybrid office and residential facility in Long Beach. I’ll be staying here on-and-off for the next few months while I rest up and recover.

I’m looking forward to potentially doing a trip on the southern edge of Arizona and New Mexico so I can make a stop in El Paso, Texas and then cross the border to visit Mexico. I’m also thinking about making a drive up to Monterey, California to visit the Monterey Bay Aquarium, the non-profit for which my friend Doug Wreden raised over US$100k and had me dress up in a bunny suit with him to eat a whole salmon as a stretch goal. (Of course, I would make multiple stops along the way, and also visit more than just the aquarium in Monterey.)

However, until then, I plan on relaxing and staying in one spot semi-long-term to take a break from constant travel.