Back when I visited Gillete, Wyoming, I stopped by the Wyoming Frontier Prison Museum, which I found to be particularly intriguing. Having pre­vi­ous­ly studied criminal justice and worked in law enforcement, it was interesting to see what incarceration was like decades ago when prisons had min­i­mal to no creature comforts.

Because of my positive experience back then, I was excited when I saw the Old Idaho Penitentiary was rated as one of the better tourist attractions in Boise, Idaho, and penciled a visit into my schedule. 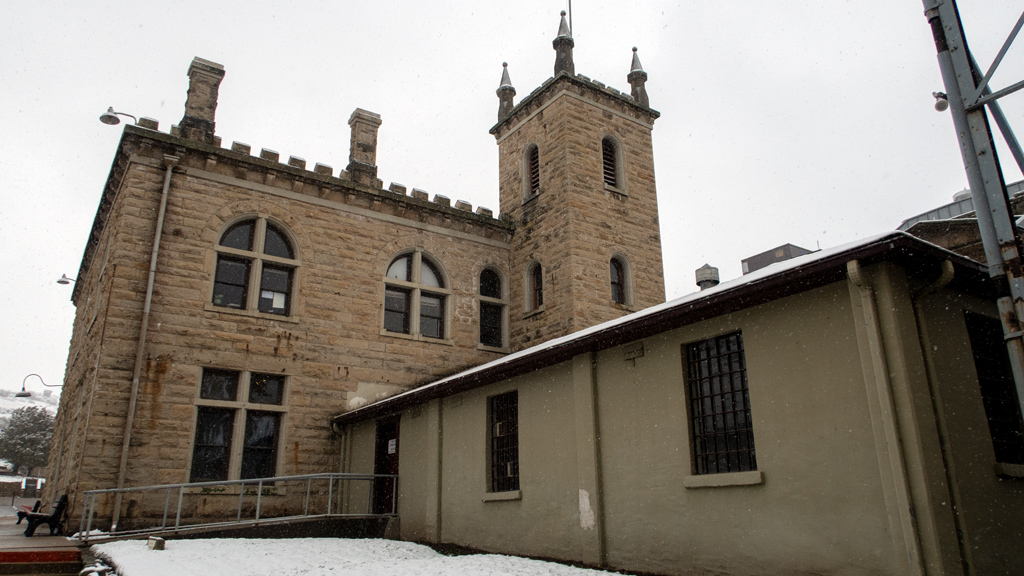 Admission was US$8.00, which I think was an $8 well spent. I was originally offered a US$2.00 add-on service for a guided tour, which I didn’t take be­cause the start time was, if I recall correctly, about an hour and a half away. They apparently usually run more guided tours, but tuned back the fre­quen­cy temporarily because there was recently a snowstorm and tourism wasn’t exactly booming.

Well, I ended up spending more than an hour and a half there. I guess I technically could’ve joined in on the tour, but by that point, I had already seen a large portion of the penitentiary, so I figured I would just finish walking through the rest myself. 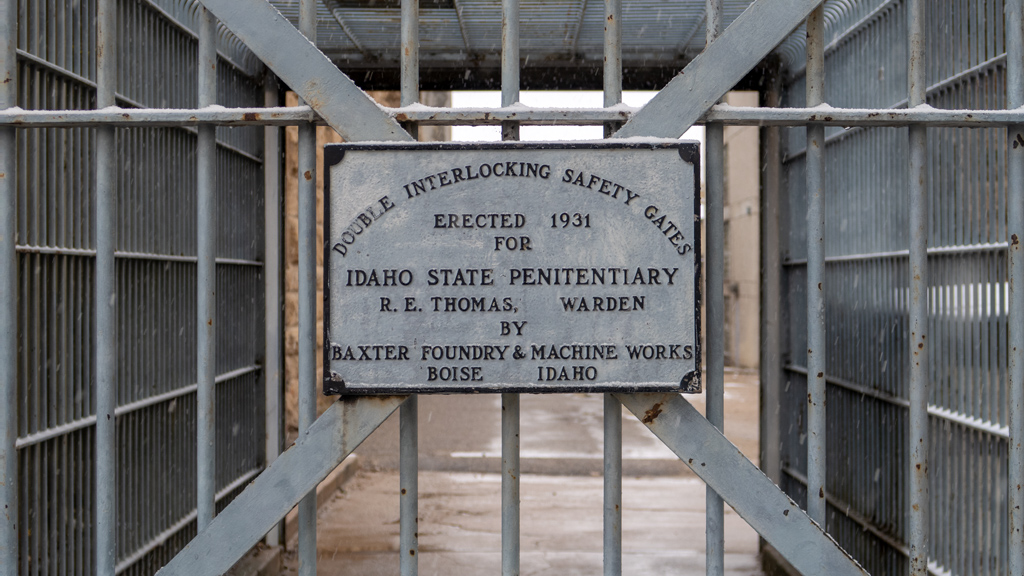 It was freezing cold and still actively snowing when I went to visit. Although there was little snow accumulation on the sidewalks, everything else was covered by a blanket of white. The snow made my visit a lot more surreal and immersive, as it really exemplified how harsh life was like here during the colder months of Idaho weather. 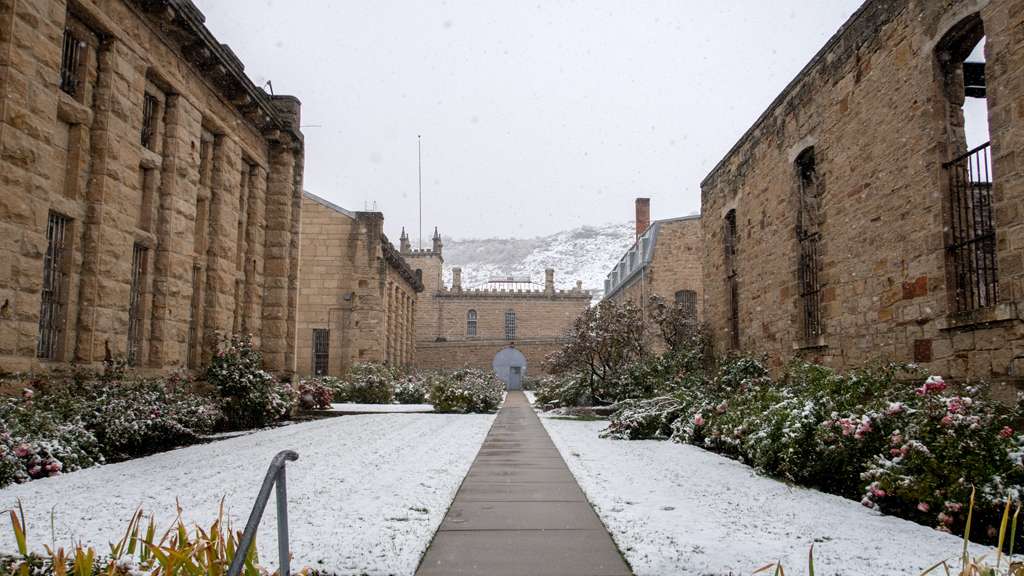 For some reason, I had trouble interpreting the self-guided tour map at first (even though it’s not actually really that confusing of a map). Because of this, after I left the administration building, I started walking around randomly and arbitrarily until I saw everything there was to see. One of the first things I took a look at was one of the watchtowers stationed in the northeast corner of the property. 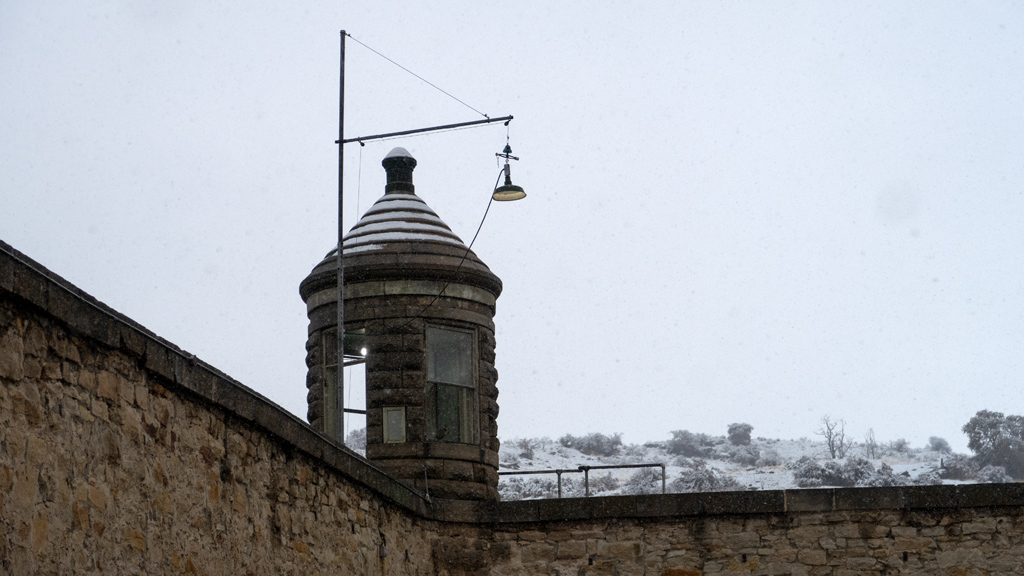 A few buildings were left in their demolished state from the riots in the early 1970s. I don’t quite remember if the picture below is of the dining hall, commissary, chapel, or cell house, but all four of those buildings fell victim to angry prisoners at some point prior to the prison closing in 1973. 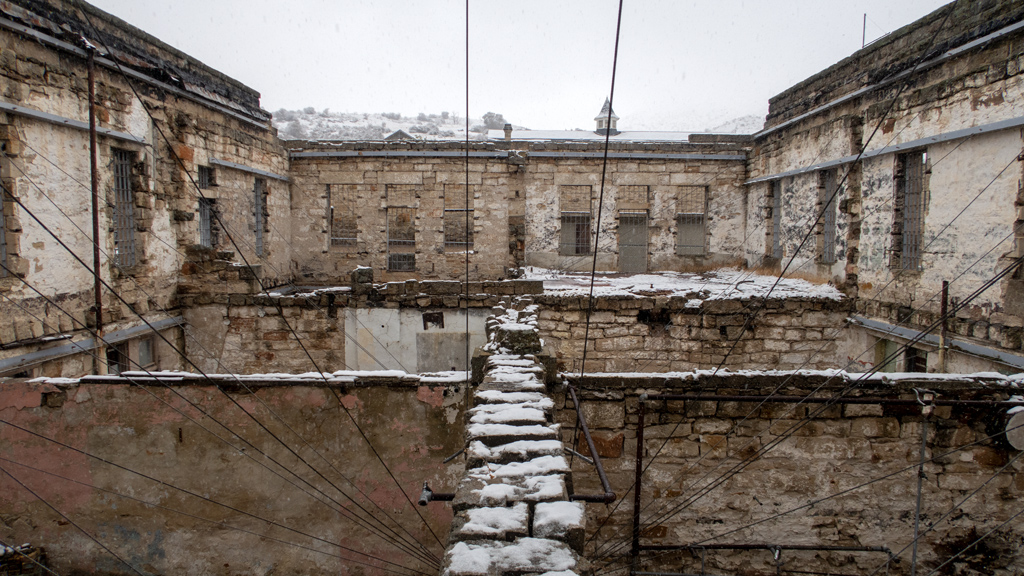 The shirt factory and loafing room building was accessible from multiple entry points, and it was the only structure that had working heat in some areas. This building still had the old laundry room (which was not one of the heated sections), and it still had all the old laundry equipment inside. 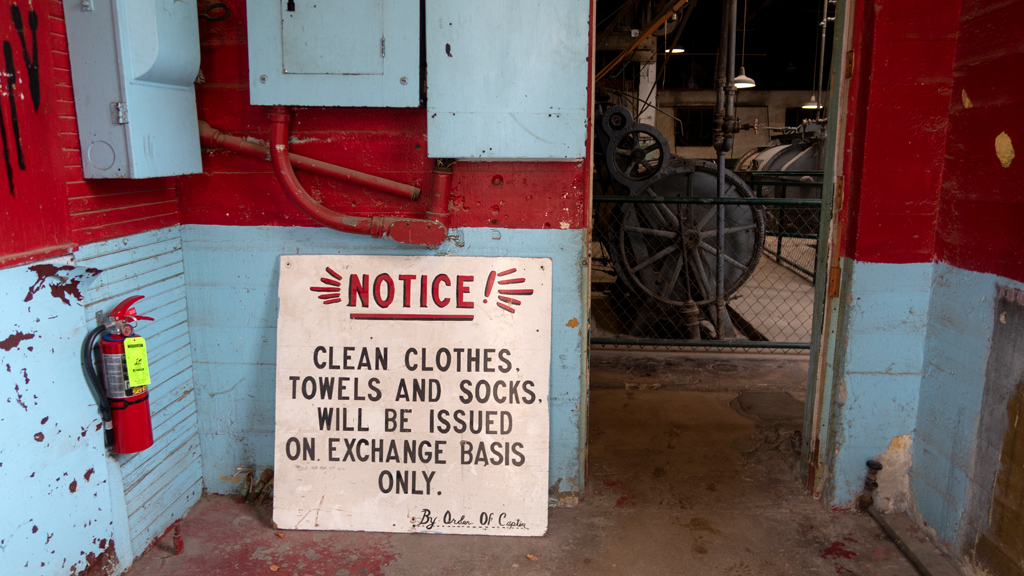 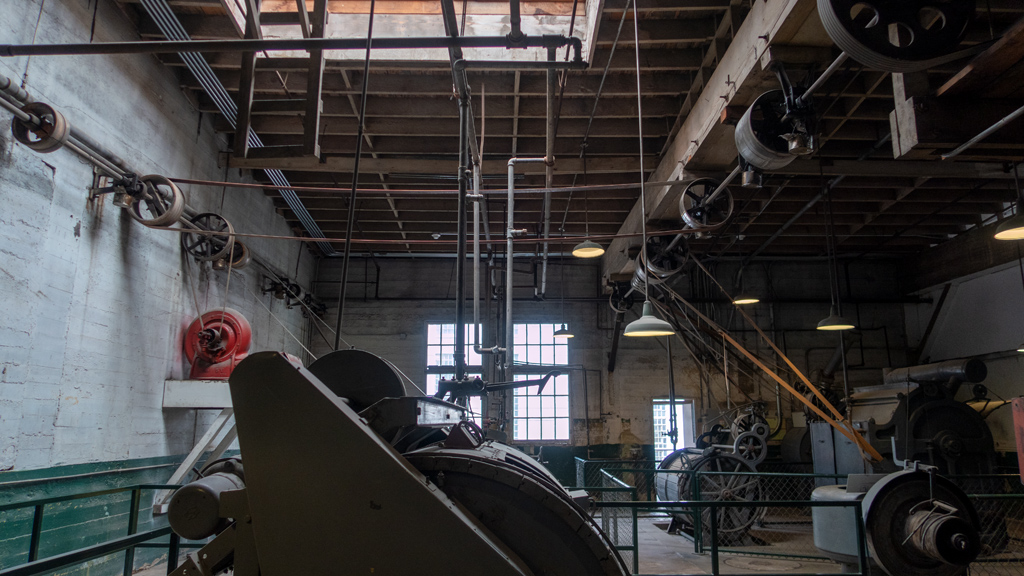 This is the “4 House,” which was the largest building that housed prison cells. There is also the “3 House” and “2 House,” which are smaller buildings, as well as the “5 House,” which I will show below. 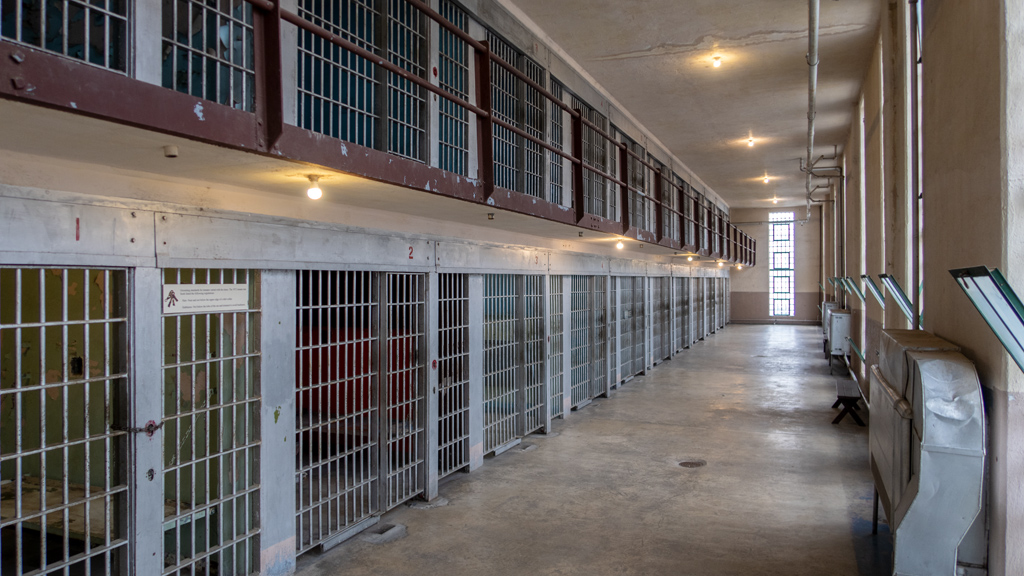 The inside of these cells looked very similar to what I recall seeing at the Wyoming Frontier Prison Museum. If the cell wasn’t so filthy and the paint wasn’t so tattered, I guess it isn’t too far off from modern-day cells as well… though that’s probably because there are only so many different ways you can arrange a bed, toilet, and sink in a small area. 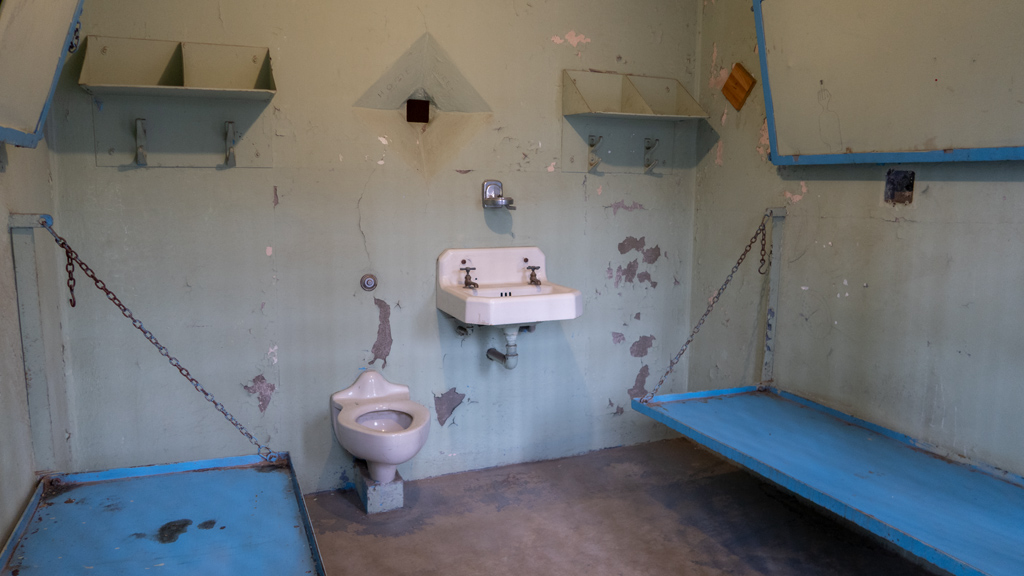 The rear hallway behind the rows of prison cells was also open for viewing; this allowed prison guards to easily monitor inmates on both sides of the build­ing effectively without having to walk in the front of the cell bars on one half of the building at a time. 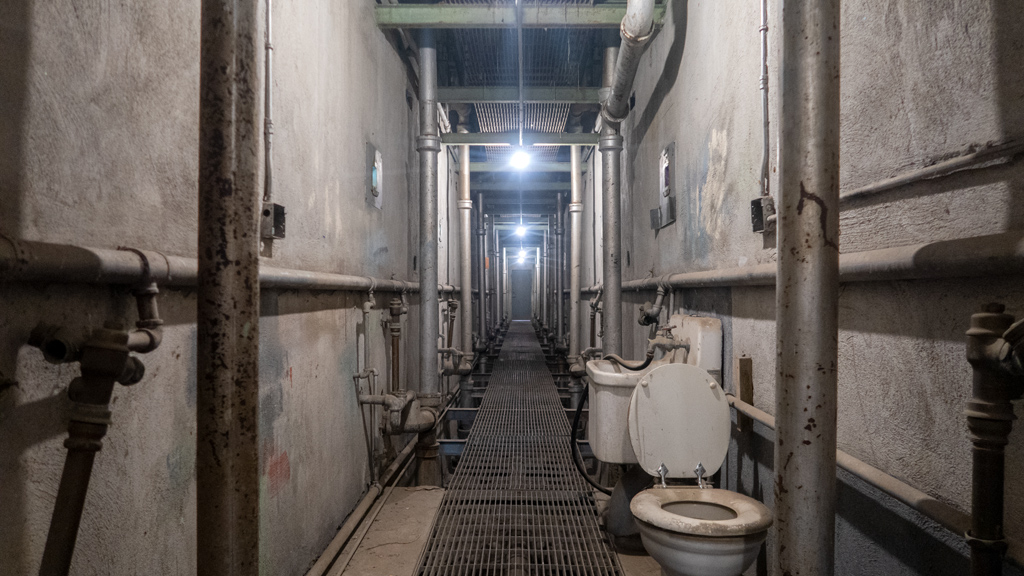 I don’t remember exactly why these cells were separated out, or why they were special enough for me to photograph, but my guess is that these might have been the dedicated cells for inmates who were on death row awaiting execution. 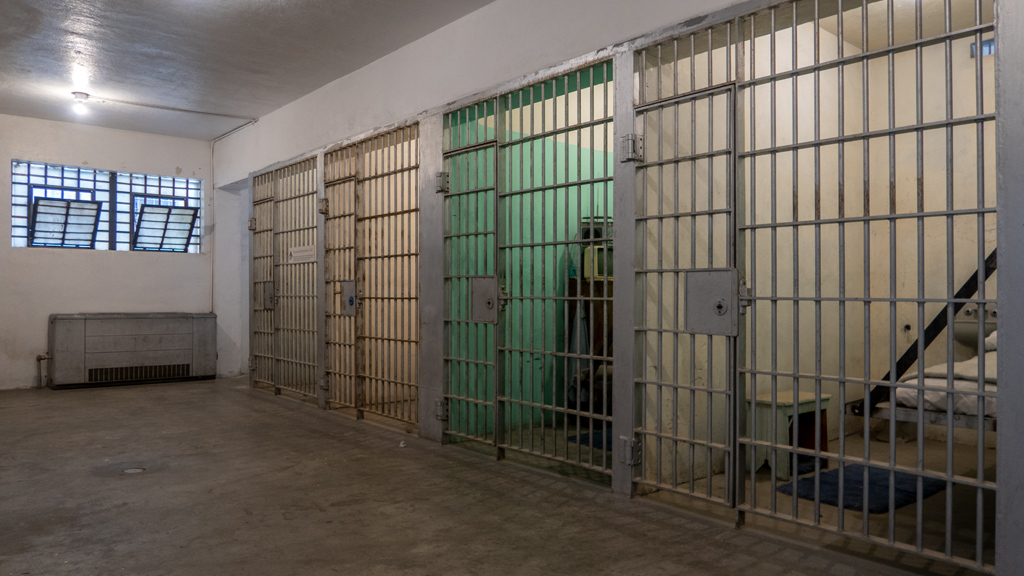 This is the “5 House,” also known as maximum security. (Or, there is also the possibility that I am getting my photographs mixed up, and I am just im­ag­ining that this is maximum security simply because the cells look more secure. Keep in mind that I didn’t follow a certain path and just kept wan­der­ing around until I saw everything, so it’s very possible that I am misremembering the route I took to visit all the buildings.) 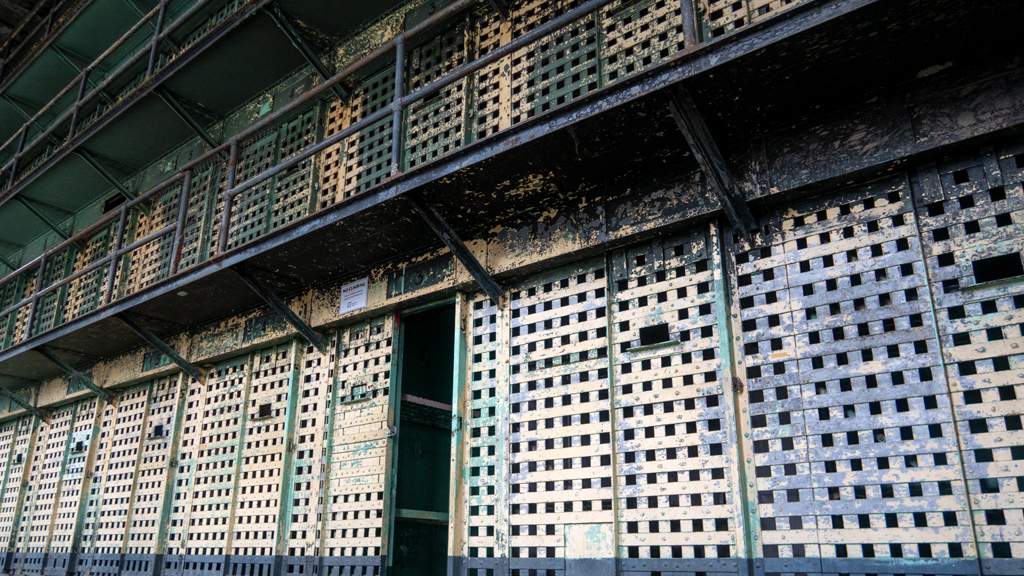 Over on the east side of the site, the barber shop was repurposed to display a timeline of the history of what happened at the penitentiary. I found this to be very interesting, and the medium of information transfer was great—there were comics threaded in between more text-heavy posters so that you could get drawn in by the visual representation of the most notable events, then be able to read more details right next to it.

The general idea of the story that was told through the comics was that conditions at the prison were horrid, and after losing patience with just dealing with it, prisoners tried to express their concerns to the prison management. After they realized their voices were basically being projected into the void, they started using violence and rioted in order to catalyze the changes the prison needed to be fit for human life. 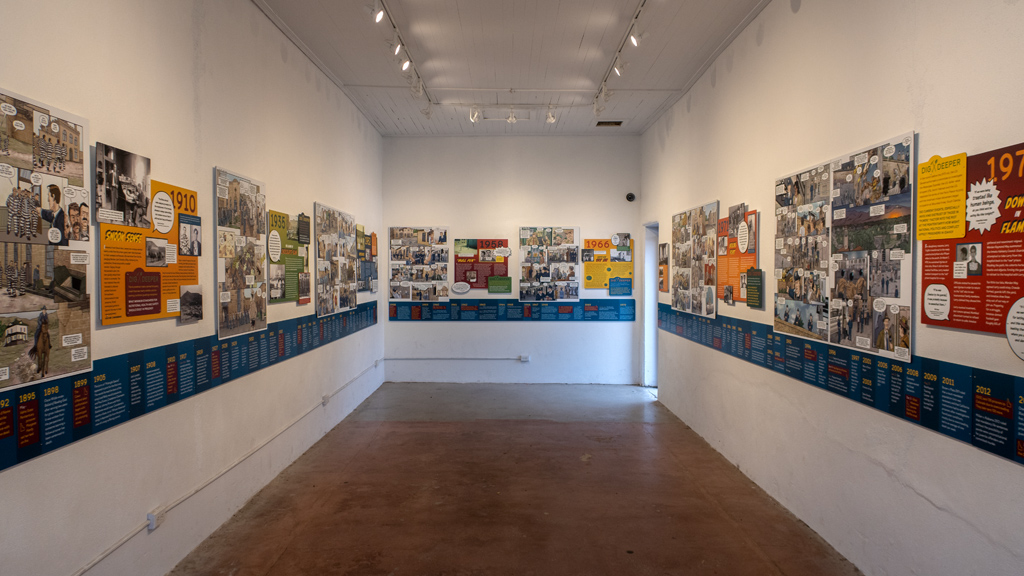 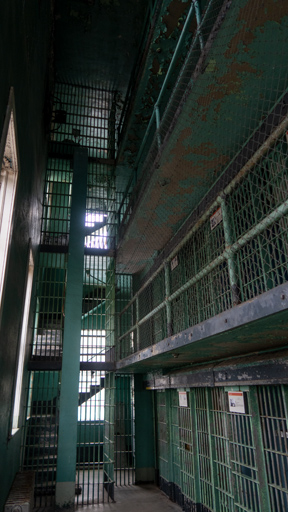 Not pictured here were two additional attractions inside the heated building that I mentioned above. The first was an event space, which did not have an active event going on, but still housed a few interesting vehicles from what I imagine was the 1970s or so, around the time that the prison closed.

The second was the J.C. Earl Weapons Exhibit, which was basically like a very traditional museum that was not related specifically to the penitentiary, but had (as you’d expect from the name) many weapons on display from a wide range of notable historical periods.

I had a great time visiting the Old Idaho Penitentiary State Historic Site. I’m sure at least some of it had to do with my background and my personal interest in criminal justice, but I think a lot of it also had to do with the fact that the presentation was done very well.

I was fortunate to stumble across the “comic room” early, so I read through everything and was able to get some solid baseline knowledge of the history so I could then use that to understand what I was looking at around the site.

Even outside the dedicated “information buildings,” there were placards posted at notable hotspots that ex­plained why the area I’m standing in or the artifacts I’m looking at were relevant and important. One of the buildings (I don’t remember if it was the “2 House” or “3 House”) even labeled each of the cells with the name of the prisoner who lived there and a brief description of the crime they committed, which made it feel even more immersive.

Unfortunately, it seems like I missed visiting one building, which was the women’s ward—I originally didn’t notice it because it was outside the fenced area, and only realized it existed after I looked back on the map later to organize my photos.

I definitely acknowledge that visiting a prison as a tourist activity isn’t for everyone, but if you don’t get grossed or weirded out too easily, I would recommend checking it out if you’re ever in the Boise area. It’s not something that I’ve noticed a lot of other cities have available, so it could be a rare opportunity to experience something that you might not otherwise have a a chance to do elsewhere.