Instead of going from Salt Lake City to Denver by heading back down south and driving through I-70, I instead chose to go through I-80 so I could hit Wy­o­ming on the way there. I’m told that the drive through I-70 is much prettier, but I also took this route sort of as a way to plan ahead for the future—I figured that, if I’m traveling to Denver again with other people, it is much more likely for us to drive through I-70 rather than I-80. For the sake of trying to seize the opportunity to do something I might not be able to again in the future, I mapped out a path through I-80.

My first stop in Wyoming was in Green River, a city in Sweetwater County. I exited off I-80 and took a break at Thomas Moran Park, where the Green River Chamber of Commerce and Visitor Center are located.

Off to the side of the Visitor Center was a little horse pen. I’m not sure why they were there, but they were my first two new friends of Wyoming. 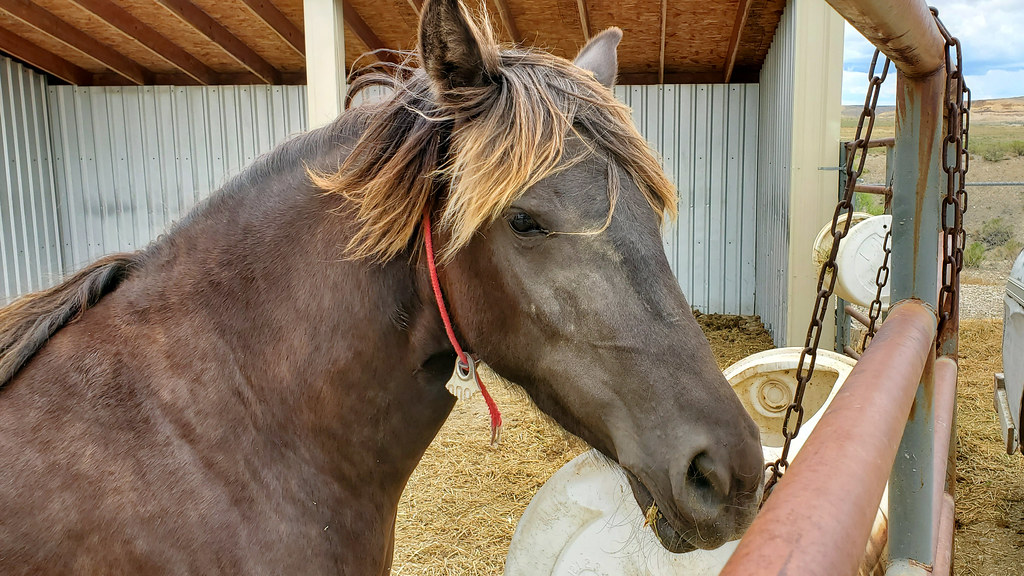 An interesting thing I noticed about Wyoming is that I don’t actually get reliable cell service here. I use T-Mobile, but most of the time in Wyoming, I’m connected through a partner network. The speeds I get are so bad that Google Maps directions often take a very long time to load, or just don’t load at all. The only functional use for this data service seems to be receiving text-only emails.

After saying goodbye to my new horse friends, I tried to search for a restaurant so I could take a lunch break, but couldn’t load Google Maps properly. I ended up just driving around the city until I saw a McDonald’s in the distance. I got a burger and tried to use the McDonald’s wifi, but even that was so slow that I still couldn’t load anything on my phone.

After my meal, I followed street signs to I-80 East and continued on my way across Wyoming, while realizing how much I take for granted a reliable In­ter­net connection wherever I go.

My halfway point between Salt Lake City and Denver where I decided to stay for a few nights was Rawlins in Carbon County. My hotel of choice was the Fairfield Inn & Suites Rawlins. Luckily, the Internet connection at the hotel was surprisingly fast and reliable, so I grabbed an offline map so I could explore without fear of getting lost.

Rawlins is home to the Wyoming State Penitentiary. Having formerly been in law enforcement and earning a degree with a heavy focus on criminology, this was particularly interesting to me. Although I didn’t plan far ahead enough to get a tour of the active prison, I was able to walk in for a visit to the Wy­o­ming Frontier Prison Museum, a tourist attraction open to the public.

The museum exhibits were free to access, but I chose to go on a guided tour of the entire facility for $10.

The recurring theme throughout the tour seemed to be that Wyoming can get to be a very cold place, and the prison’s technology systems were fairly far be­hind, so the inmates were basically freezing to death the entire time and would go out of their way to do things to keep warm. For example, they would purposely cause mischief so they would be “punished” by being sent to a different, “harsher” area of the prison—which actually ended up being bet­ter for them, because it was warmer there. Or, because this was a working prison, some would do everything they can to get a job in the kitchen where they could stand by the vats of steaming food that would keep them warm.

This prison was the set of the 1987 film Prison. Back then, the prison was set for demolition, so the production company made some permanent mod­i­fi­ca­tions to the prison, including adding an extra door in a visitation cell and drilling a massive hole through a concrete yard barrier. However, after that point, it became very obvious how expensive demolition would be, so it was left as-is and is now a museum.

My stay in Wyoming was as interesting as I thought it would be—I expected pretty much nothing, and there was a whole lot of nothing.

Another thing there was a lot of was rain—apparently it’s commonplace for it to be sunny one minute, then pouring rain the next. The weather was in the 50-60s°F, which is usually a bit too cold for my liking, but was actually very refreshing this time around because I had spent a majority of the month in a 100+°F heat wave on the West Coast.

Tomorrow, I set off for Denver, Colorado.