I’m not really much of a holiday person, so I didn’t really have much of an interest in doing anything special for Halloween, but when I was browsing Google Maps, I noticed a place called “Haunted Forest at Sacajawea State Park.” I figured that, even if I don’t want to go out of my way to celebrate Halloween, this is still a good spot to stop by. It’s in a state park so I can go hiking there, and I already have a Discover Pass for Washington State Parks so I can go for free and get more value out of my purchase prior to departing Washington.

When I arrived and drove deeper into the state park to the parking lot, I went through a lot of autumn foliage. Having spent most of my autumns from the past few years in areas that don’t have trees that undergo the autumn leaf color phenomenon (yes, I just looked it up, and that is apparently literally the scientific name for it), it was nostalgic seeing so many orange leaves everywhere like I did when I used to live in Illinois and Wisconsin. 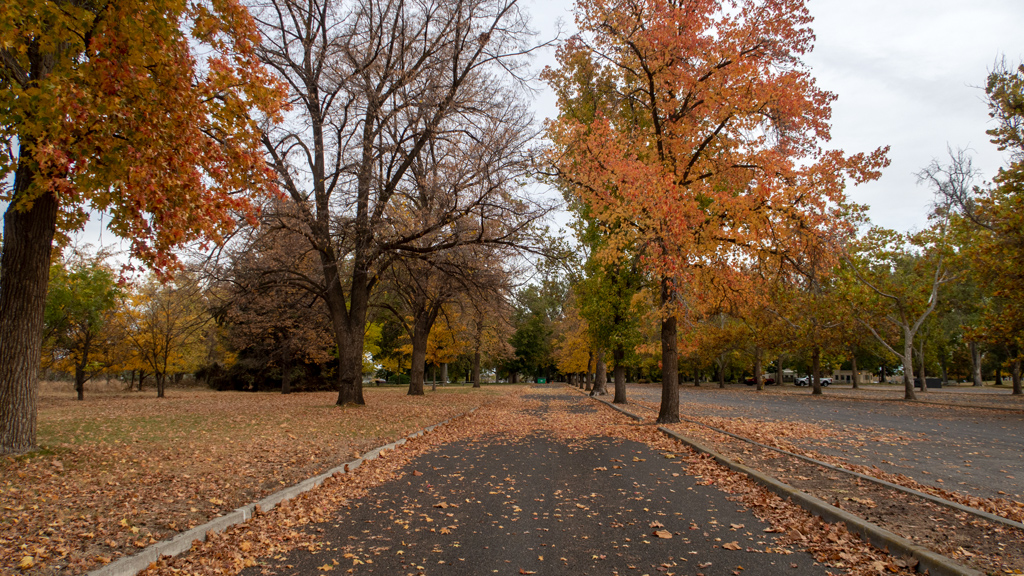 From the parking lot, I walked east towards a structure I saw in the distance. It ended up just being a sheltered picnic area. 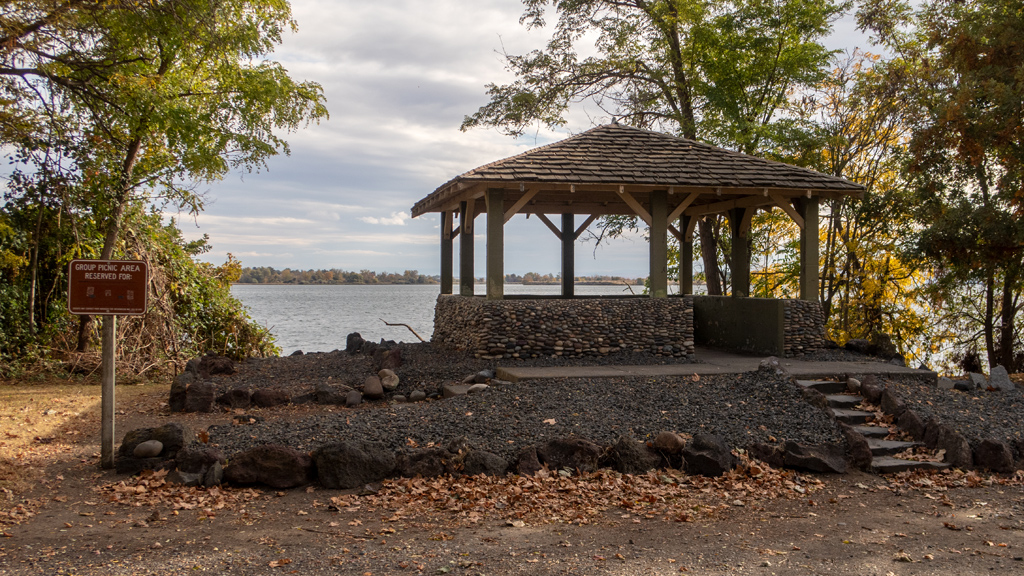 I followed a path behind the picnic area and walked alongside the shoreline. Far in the distance, I saw a bridge over the Columbia River with train tracks that connected Finley to Burbank. 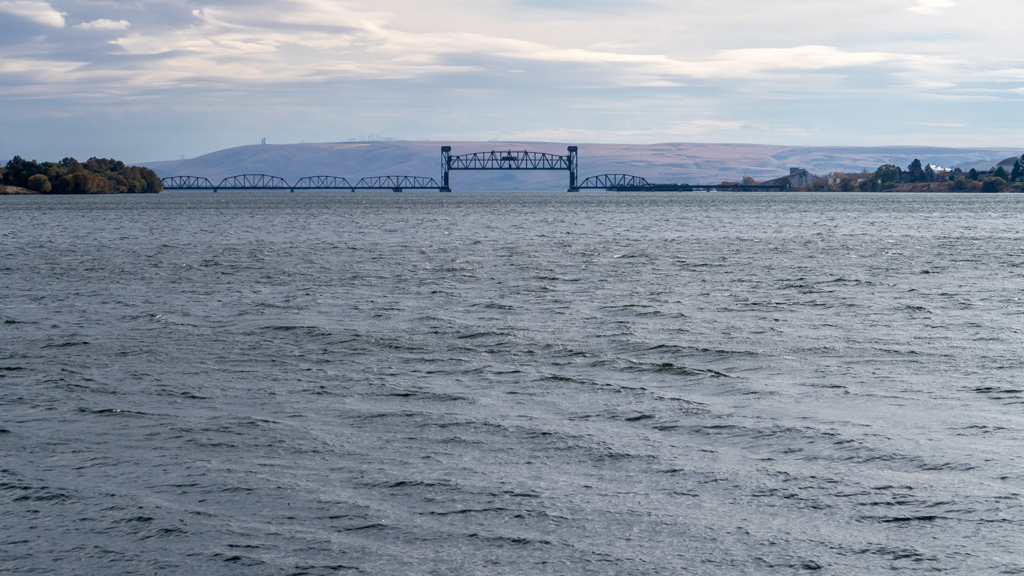 Farther down south, I saw an opening that let me get very close to the Snake River, so I climbed all the way down to snap a photo from a different angle. 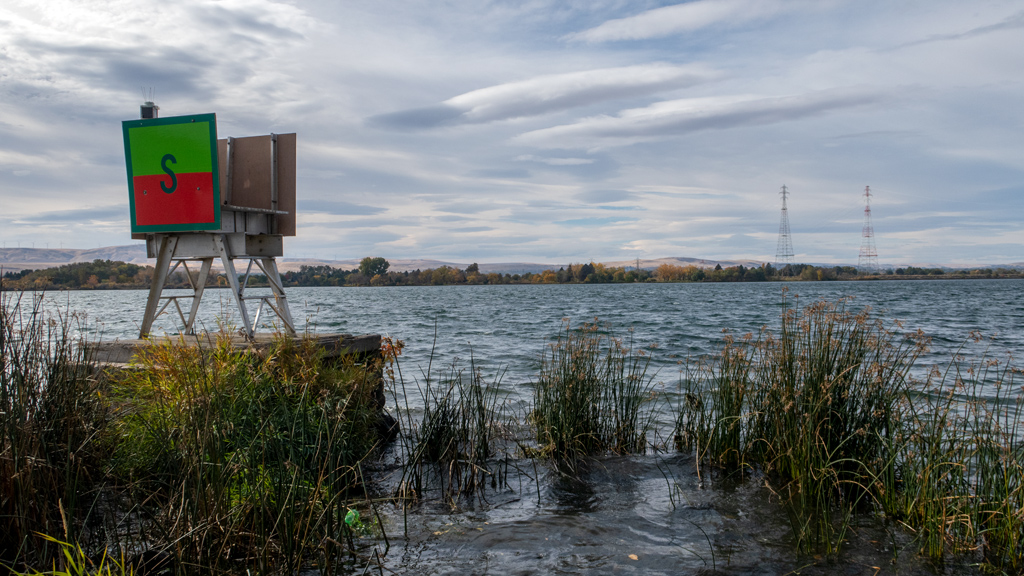 After making my way back up, I saw another building, which I found out was the Sacajawea State Park Interpretive Center. It was a fairly traditional mu­se­um with some relics on display and a lot of text accompanying them. There was no extra fee for admission—it was included in my Discover Pass. 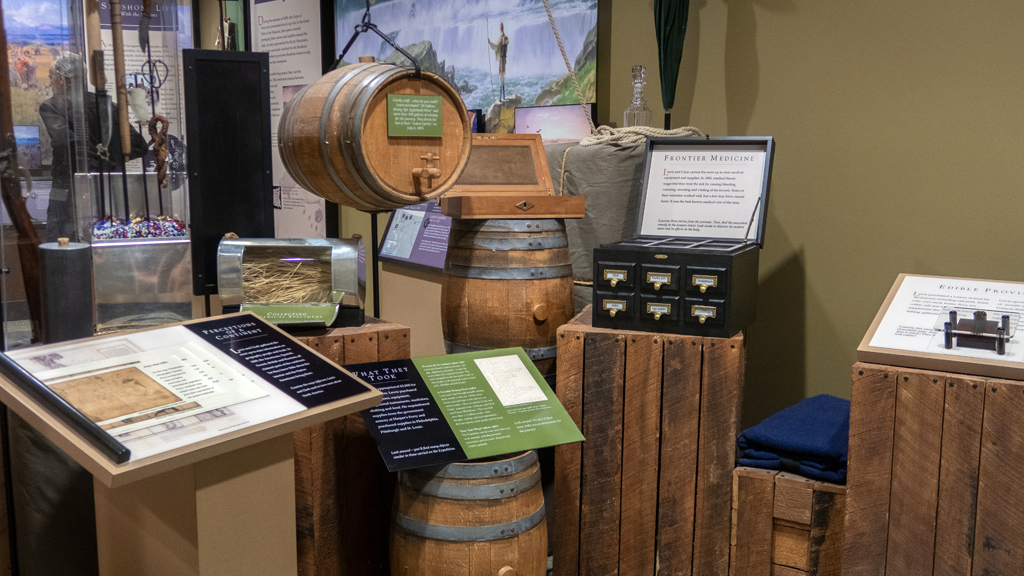 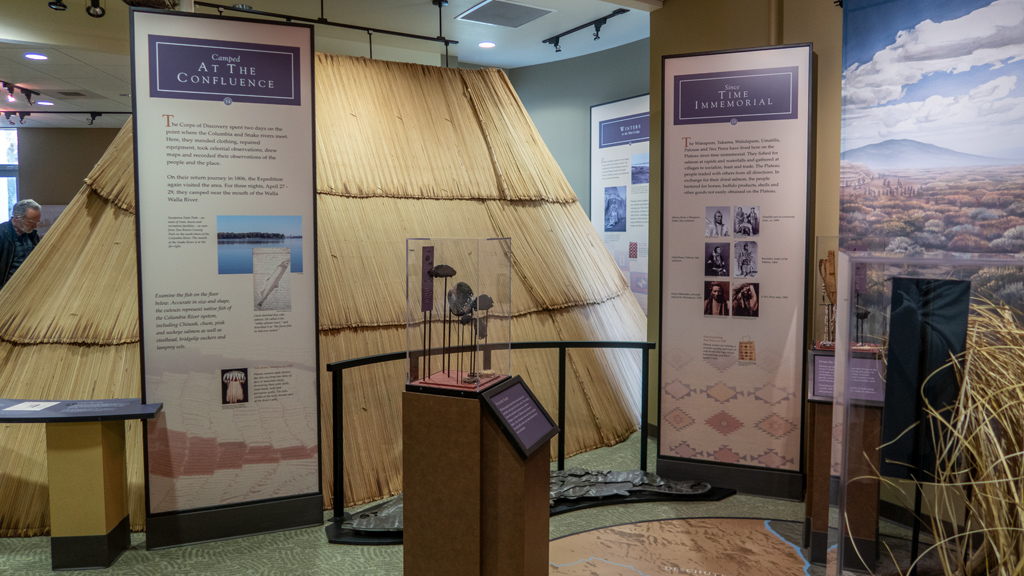 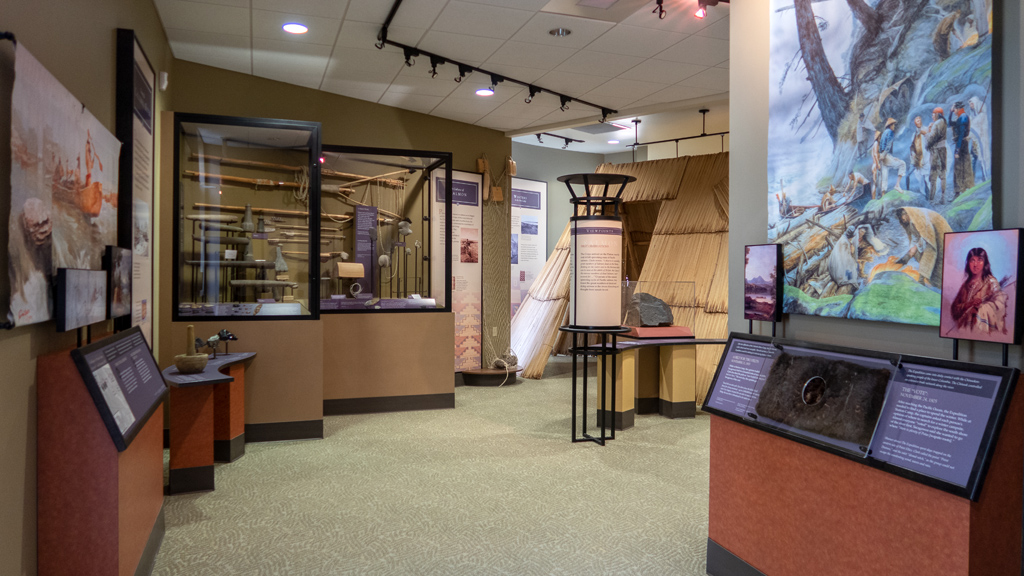 It was now time to find the Haunted Forest. After leaving the Interpretive Center, I kept walking north past the parking lot and found a trail that led first to a smaller pond that connected into the Snake River… 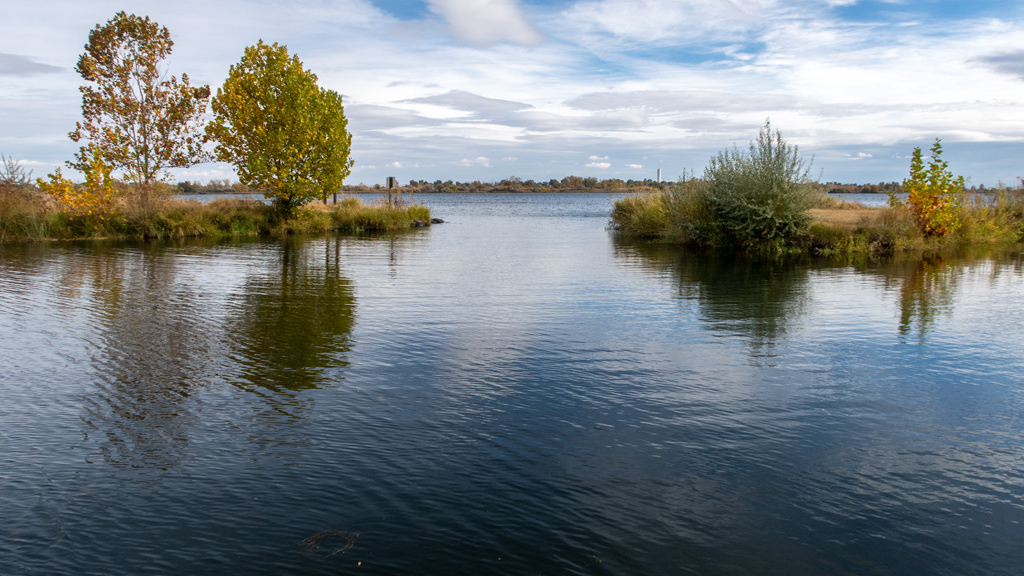 … and then a couple of tipis that were untented and just had the wooden sticks. 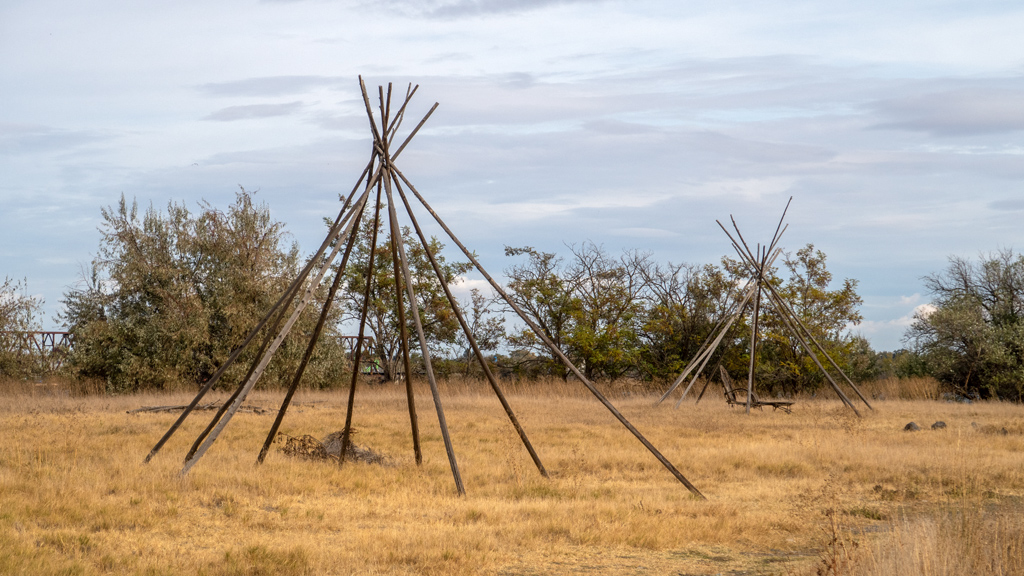 From here, the path continued further north, but the Haunted Forest was to the west. I looked around trying to find out how to get to the Haunted For­est, but all I could see was sparse vegetation and an empty field. At this point, I realized that I had probably made a mistake—there wasn’t an actual haunt­ed forest there, but rather, it was just a special event. Upon taking a second look at the Google Maps reviews, I realized that it might have been an annual seasonal event that has since been canceled as a result of the COVID-19 pandemic and hasn’t returned yet.

I probably would’ve been disappointed if I had come here just for the haunted forest, but luckily, I was enjoying my walk, so I continued on the trail. In the northeastern part of the path prior to the loop back around to the west, there was a clearing where I again was able to climb very close to the Snake River and take a nice photo of another train track bridge, this time connecting Pasco to Burbank. 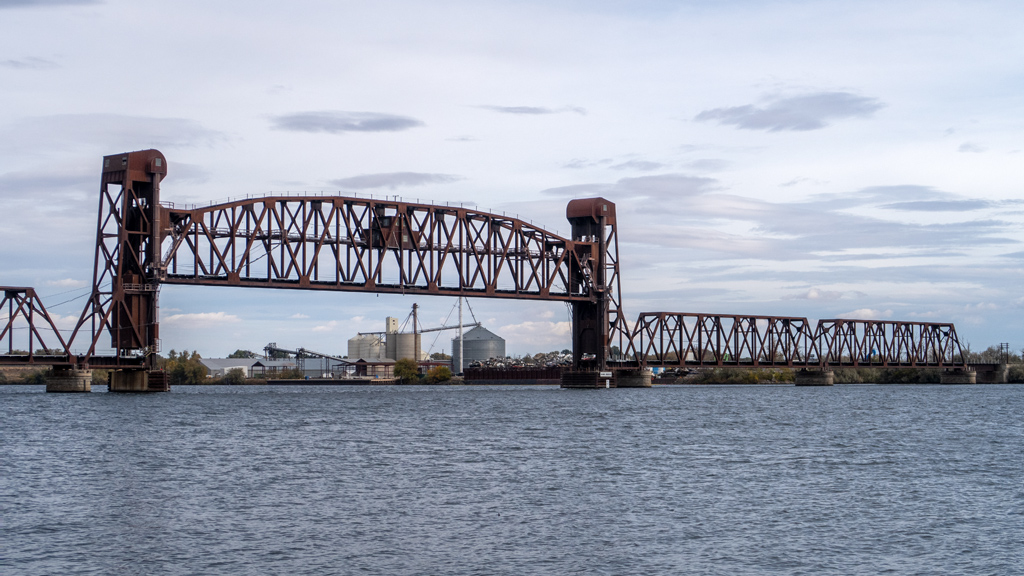 As I looped around the bend and made my way across the northern side of the trail, there was a point where I originally snapped a photo and didn’t think much of it at first, but after I saw it again on my computer, I liked its aesthetic. It is a row of power lines extending into the distance with a faint row of windmills dotting the horizon. 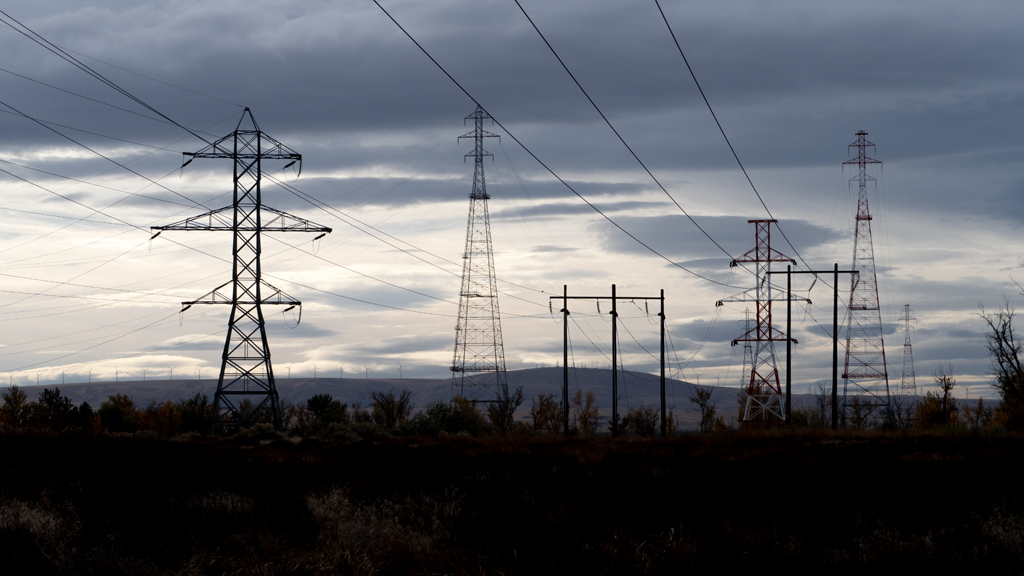 This northern stretch of the trail was a lot more rugged and started to get a little bit overgrown. It was also an amusing sight to see when I came across what appeared to be mounds upon mounds of tumbleweed that I imagine had somehow rolled their way onto the side of this foot path and gotten lodged among the trees.

Eventually, the hiking trail ended and connected back onto Sacajawea Park Road, the auto road leading from U.S. Route 12 all the way to the parking lot. I walked the final semi-circle on the rocky shoulder of the road, and at one point near an intersection with a bike path, I was able to get somewhat of a view of Indian Island. 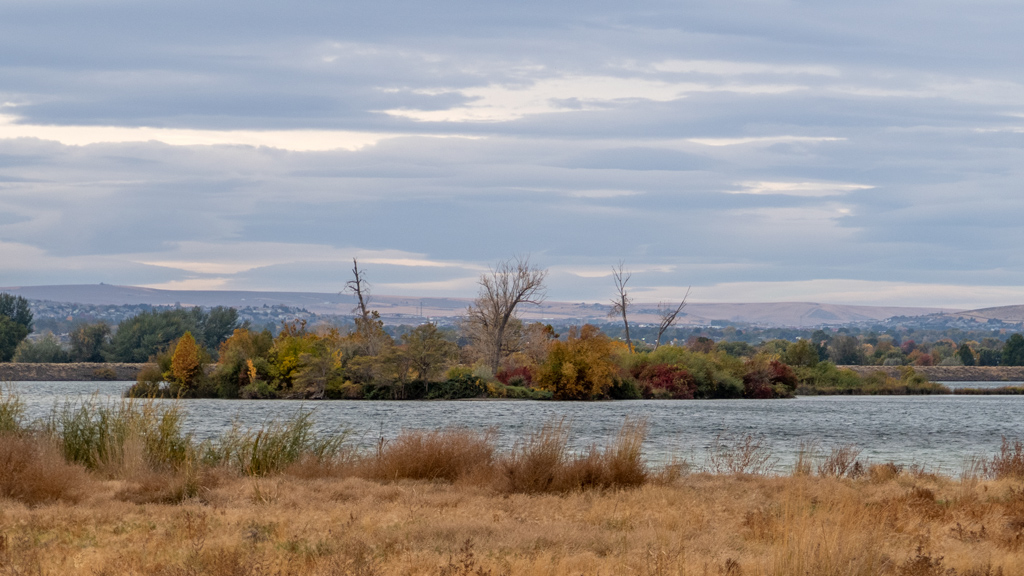 Eventually, I made my way back to the parking lot. 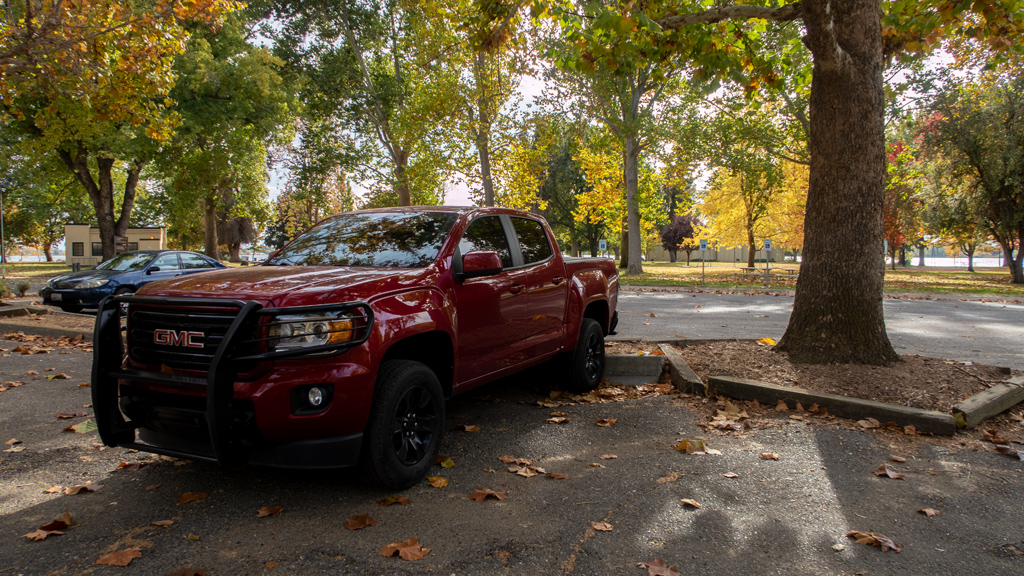 In total, my GPS tracker said my walk was 2.68 miles (4.31 kilometers), though I am guessing that it might be marginally higher than that because I left it going while I was walking around the museum and it tends not to capture movement as accurately when I am inside a building.

I wouldn’t say this state park is anywhere near impressive, especially if you’re not going for boating or picnicking, but if you already have a Discover Pass and don’t have to pay the $10 admission fee, then it’s still a nice place to go for a walk. Even though I went on a Sunday, it was still pretty empty, and most of the few other people who I saw around were also just going for leisurely walks with their families and/or pets.