After digging around on Google Maps and All Trails, I noticed that Tri-Cities doesn’t really seem like the best place to go hiking, as the area appears to be relatively flat. However, I did come across Badger Mountain, part of the Yakima Fold Belt that was created through tectonic compression.

I decided to start my hike at the Westgate Trailhead, located on 210 Private Road off of Dallas Road, and right near the intersection of Interstates 82 and 182. I got on Skyline Trail and started zig-zagging my way up the mountain.

Once I got past the point where Skyline Trail crosses over 210 Private Road, I already started seeing some pretty nice views of South Richland. 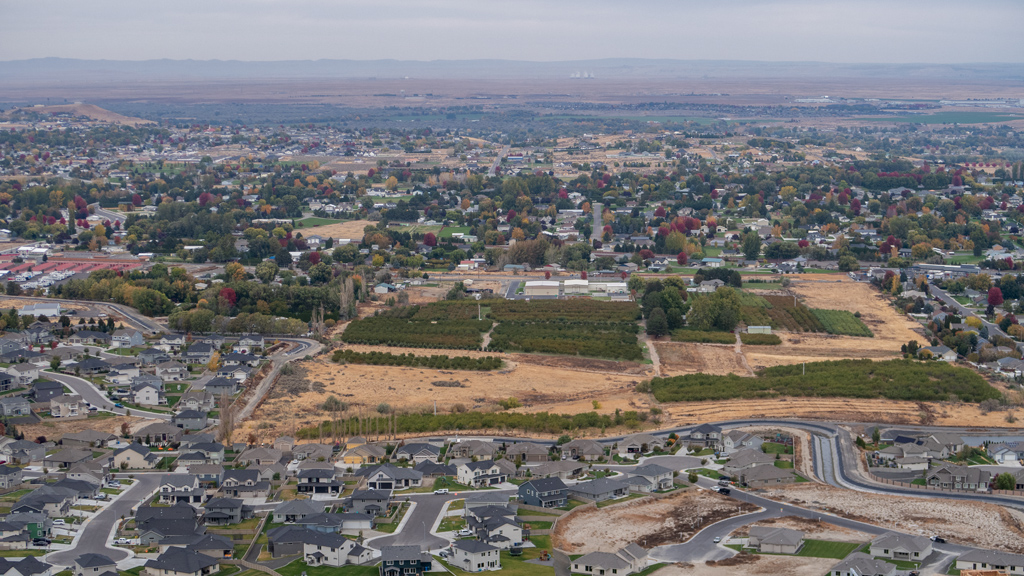 As I kept climbing, I saw a rock labeled “Lake Lewis.” I looked around but there was clearly no lake, so I snapped a photo of the marker to do some re­search later.

I found out that Lake Lewis was a temporary lake that people suspect existed around 13,000 to 15,000 years ago which was caused by the cat­a­clys­mic Missoula floods. Based on evidence found in the Pacific Northwest, it is believed that the lake reached elevations of 1,250 feet. That means, during the floods, this entire area was engulfed in water as high as this marker rock. 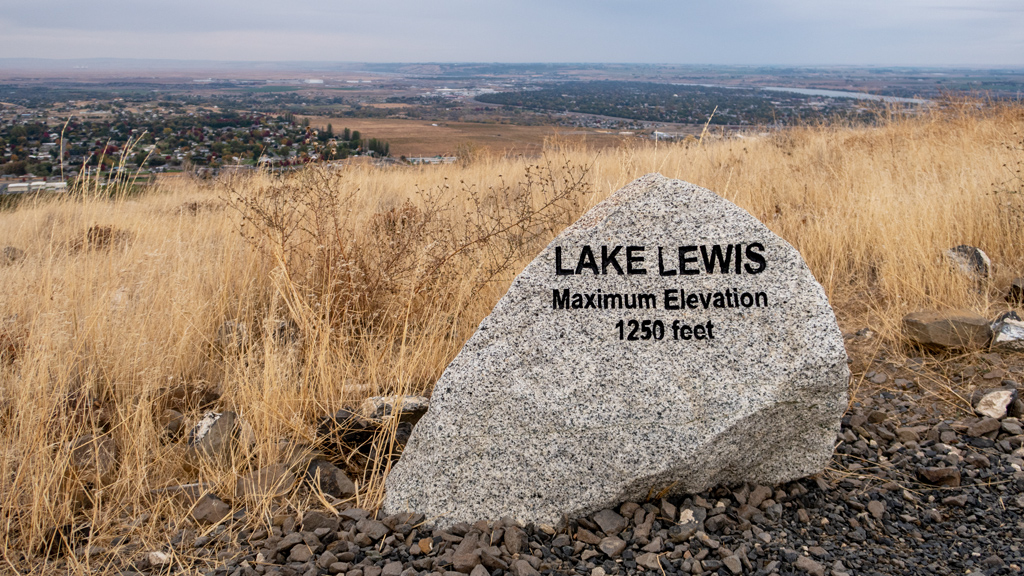 Badger Mountain didn’t seem quite lively or colorful, but I did see this lone plant with purple flowers on my way up, so I snapped a photo. 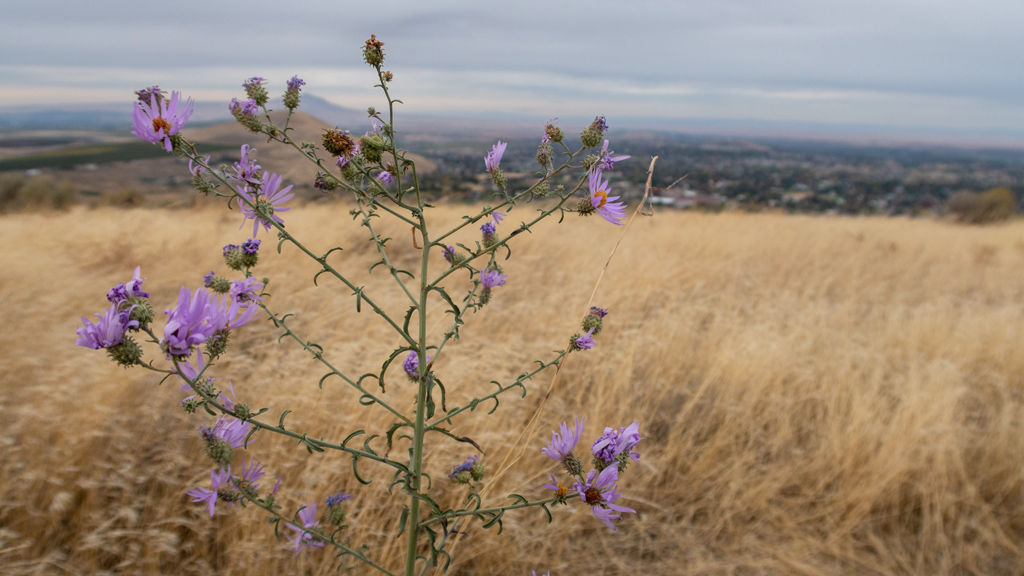 Continuing higher, Skyline Trail crossed back over 210 Private Road and went on the southern side of the mountain, opening up views to the un­de­vel­oped land and some of the new homes built on either sides of Ava Way and Trowbridge Boulevard off Dallas Road. 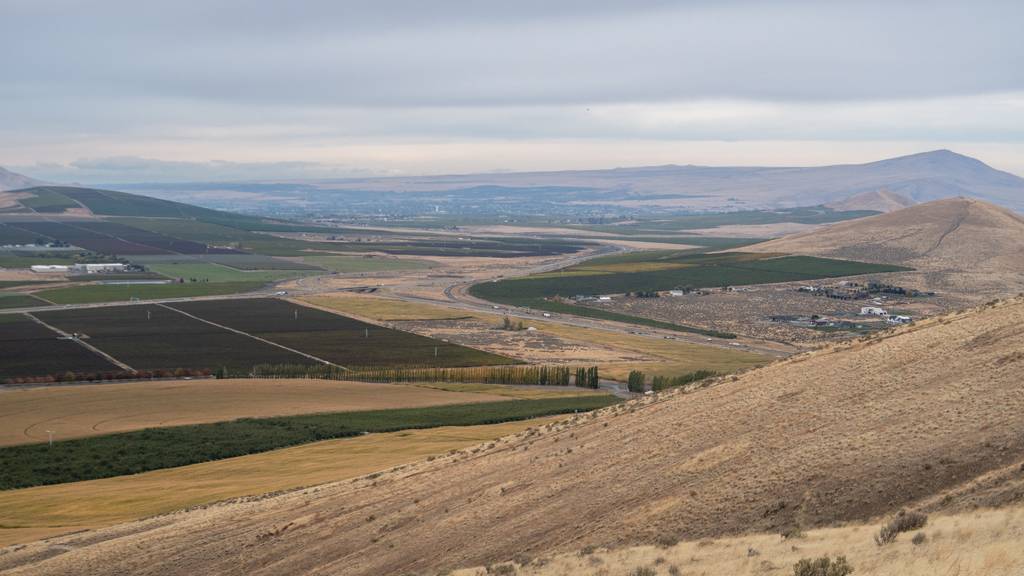 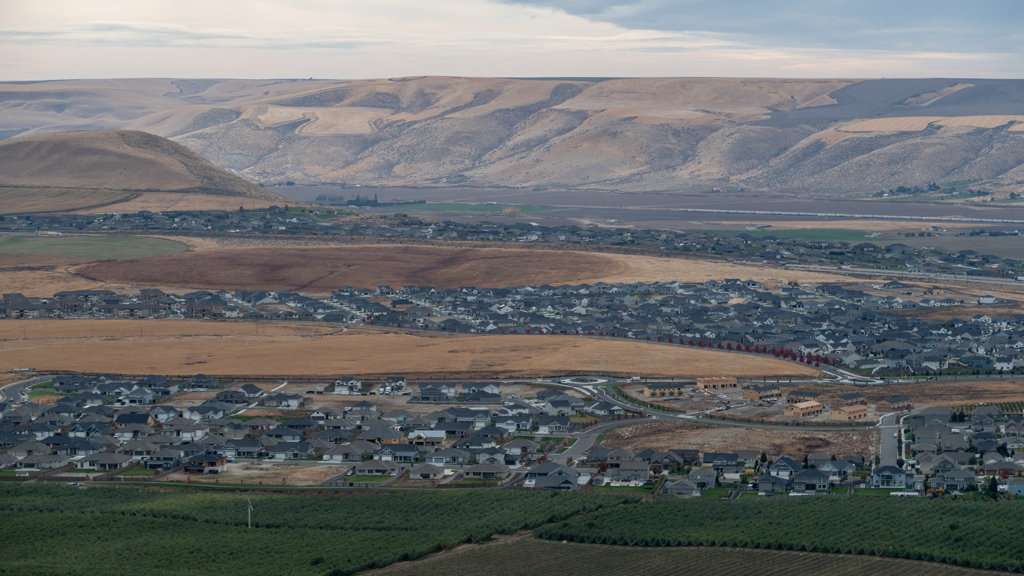 As I approached the summit, I saw a cluster of radio towers. 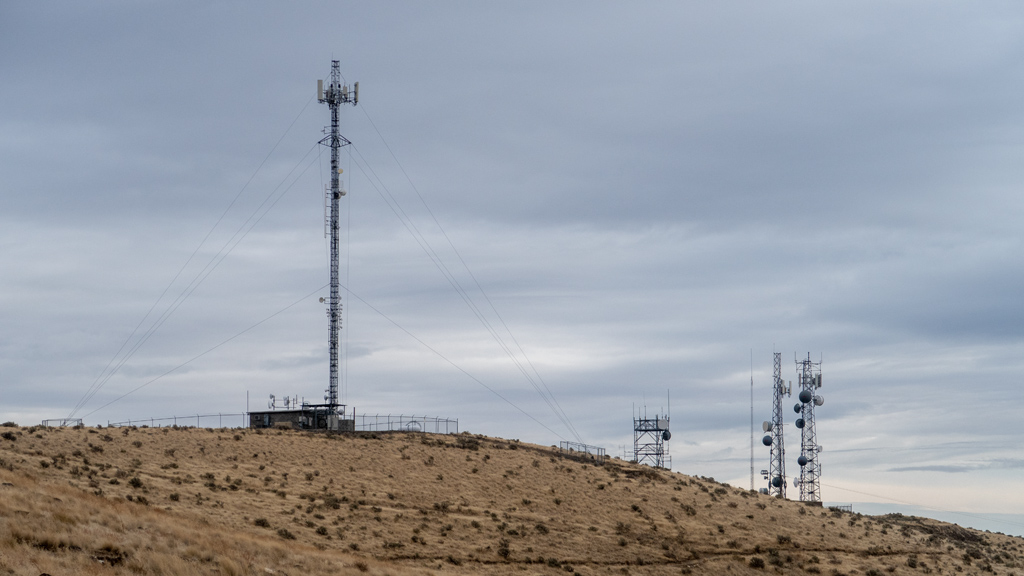 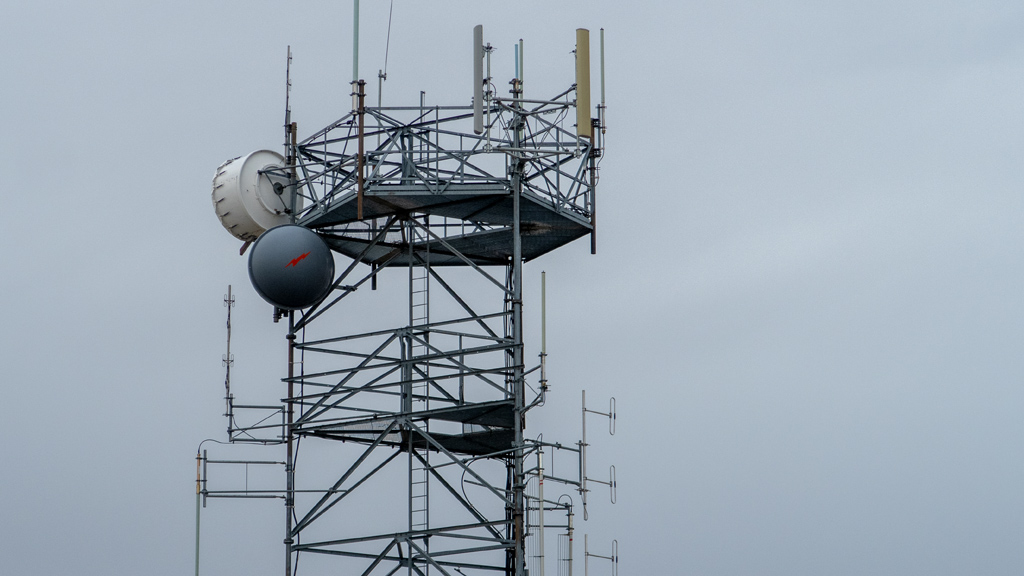 When I did a loop around the radio towers and approached the intersection of Skyline Trail and Canyon Trail, I was able to see sweeping views of Richland, Kennewick, Pasco, and even as far as the edge of Burbank on the other side of the Columbia River. 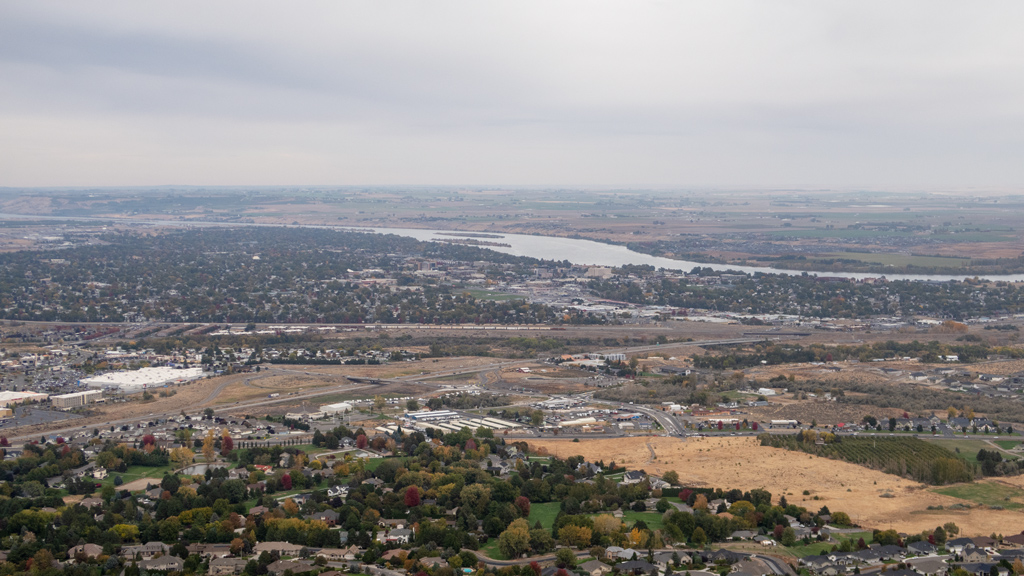 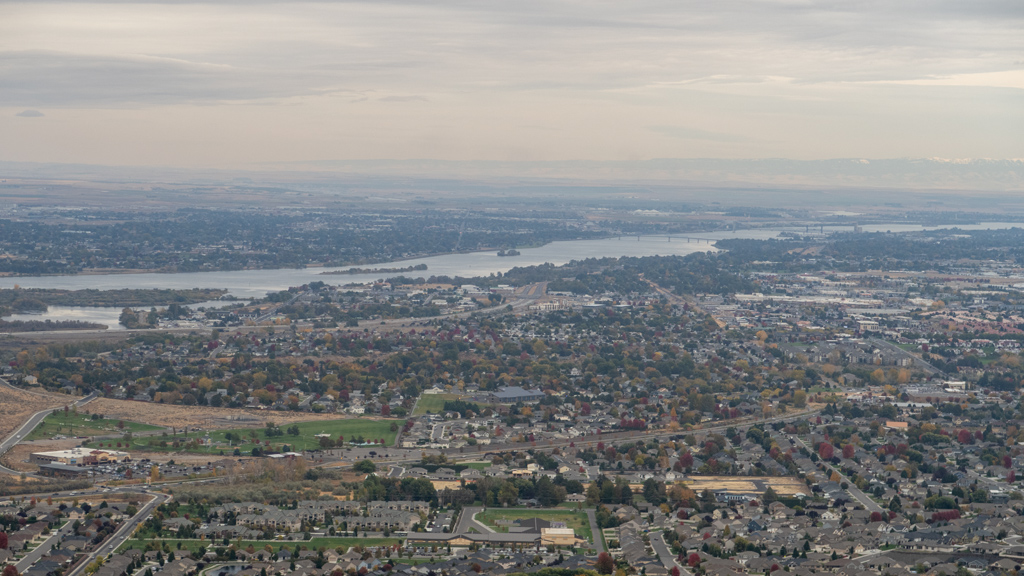 As I circled around and prepared for my descent, there were a couple other radio towers away from the original cluster that I had seen. 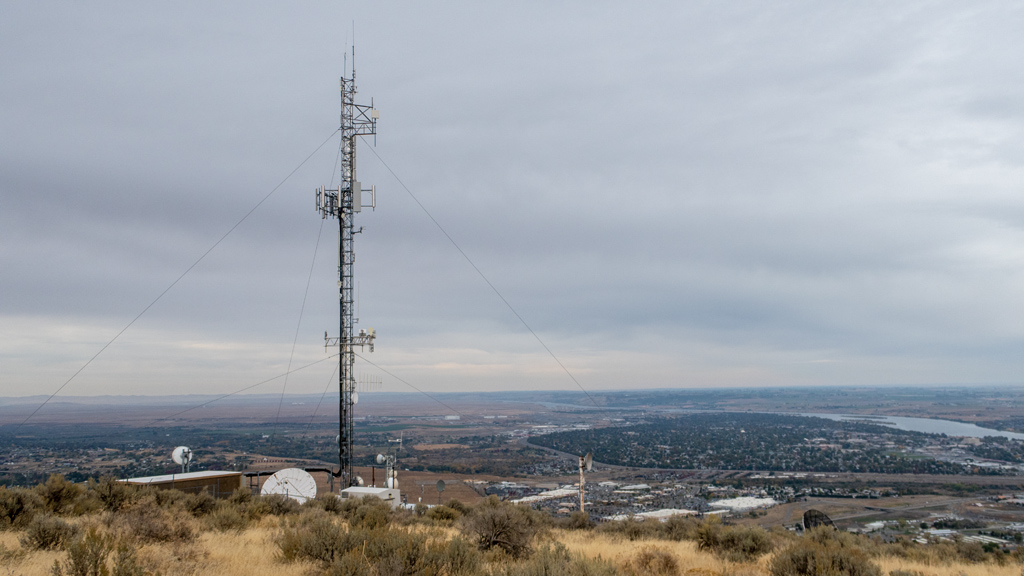 While I was at the summit, it began drizzling rain, so I decided to take a quicker route back down—instead of retracing my steps on the winding Skyline Trail, I just took 210 Private Road straight down the middle. As I got closer to the bottom, I was able to get some nice views of what I believe is the Goose Ridge Estate Vineyard and Winery (though I may be disoriented and it might actually be one of the neighboring plots of land instead). 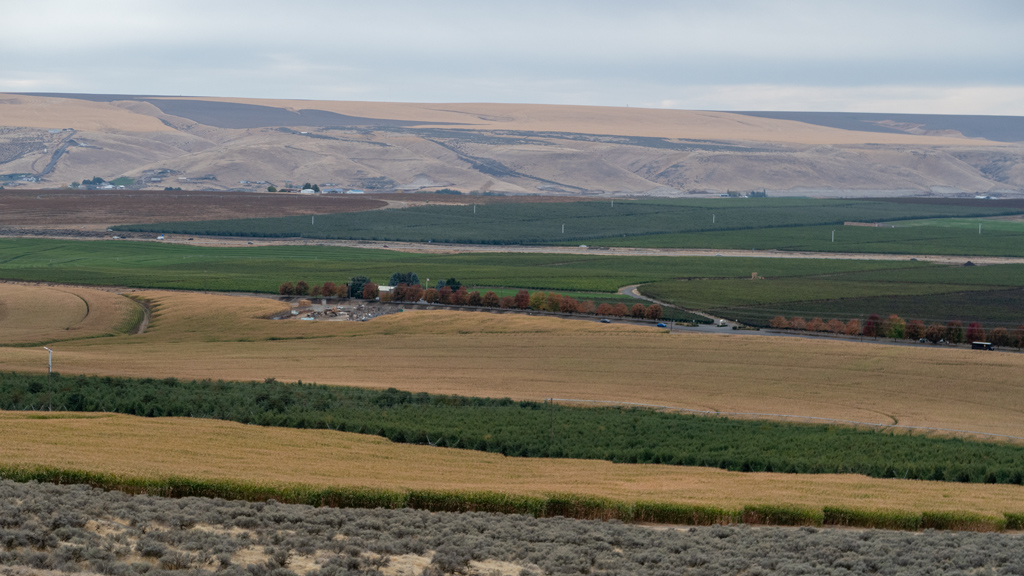 Eventually, I made it back down to the parking lot without getting too wet and avoided getting hit by lightning. 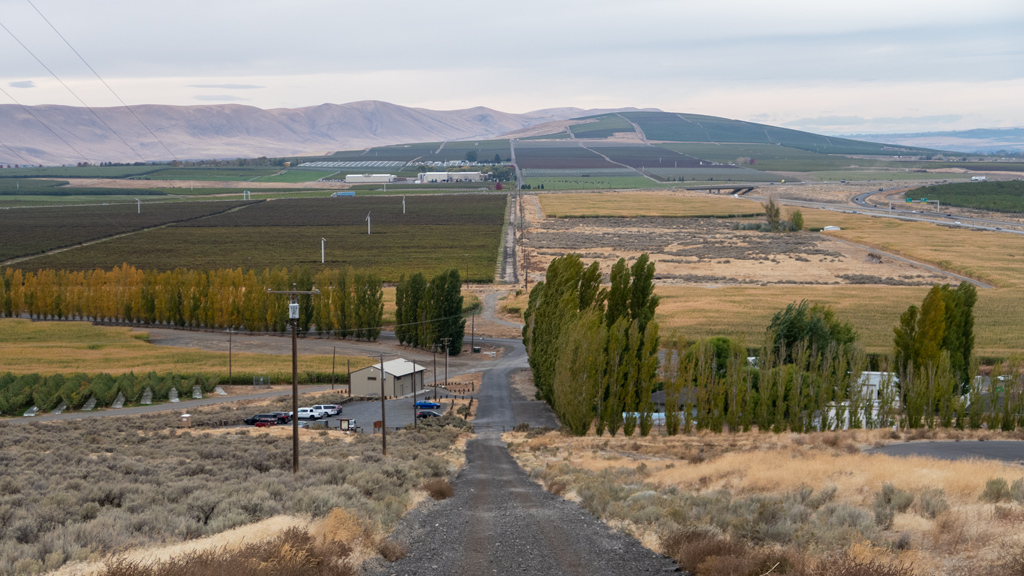 Overall, my hike was a little bit over 3½ miles (or just a little under 5¾ kilometers) in distance and approximately 700 feet (or about 212 meters) in el­e­va­tion gain.