During my routine once-every-two-months one-week-long air trip to Las Vegas to take care of all my errands all at once while road tripping across the country, I met up with two of my friends to go hiking at Mount Charleston, northwest of the Las Vegas Valley in Nevada. Also joining me this time around was Zumo, their Keeshond. 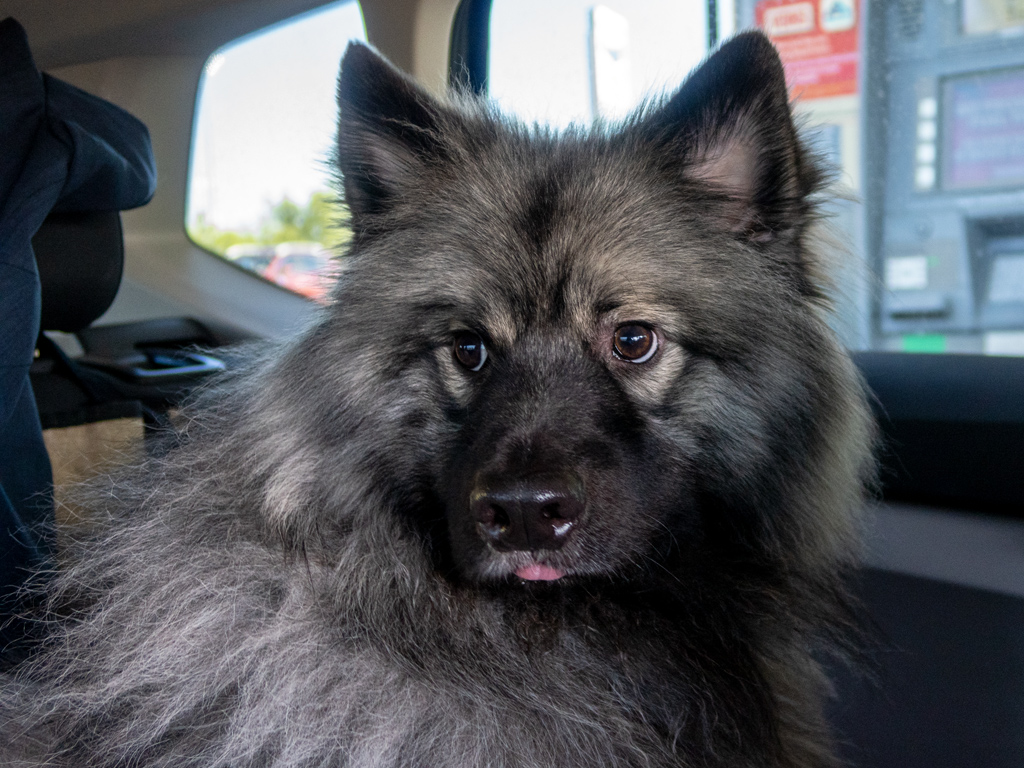 Before heading up to Mt. Charleston for our hike, we stopped by a gas station to get some beverages and snacks. Apparently there was a dog treat for sale at the gas station, so Zumo got a snack as well; if you look closely, you can see the small mess he left behind below his mouth. 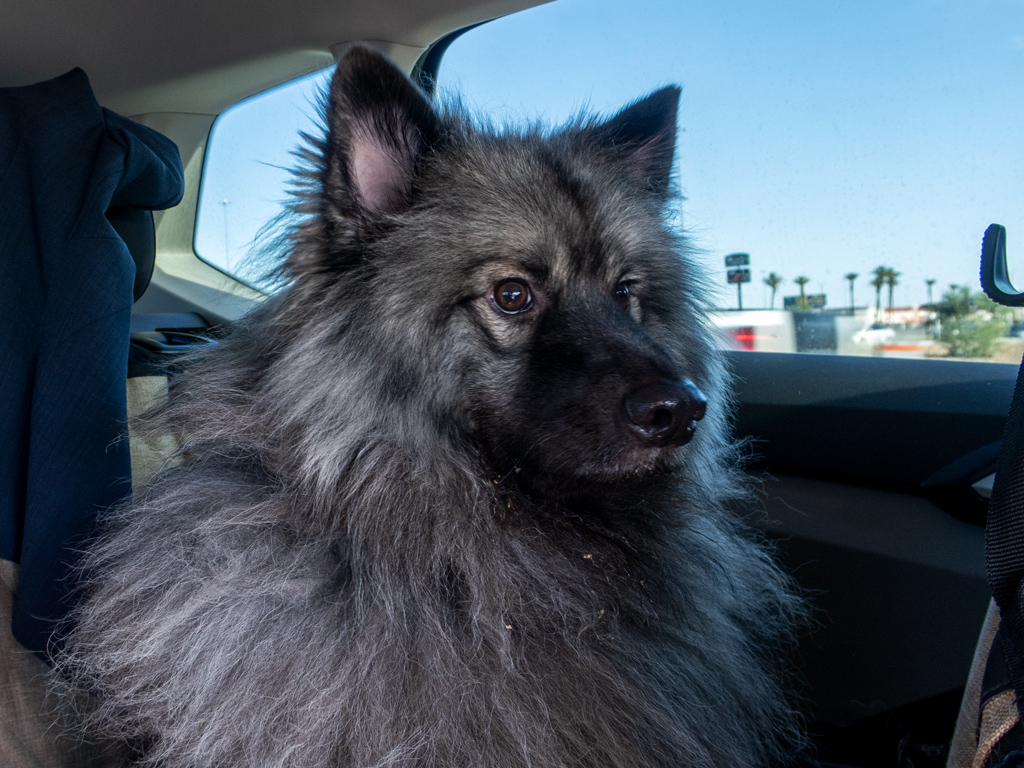 As we got closer to the trailhead, we came across what appeared to be a wild horse. I’ve seen a ton of horses throughout my road trip, and even went to the Kentucky Derby Museum in Louisville to learn more about horses, but this is the first time that I saw a wild horse just roaming around out in the open. 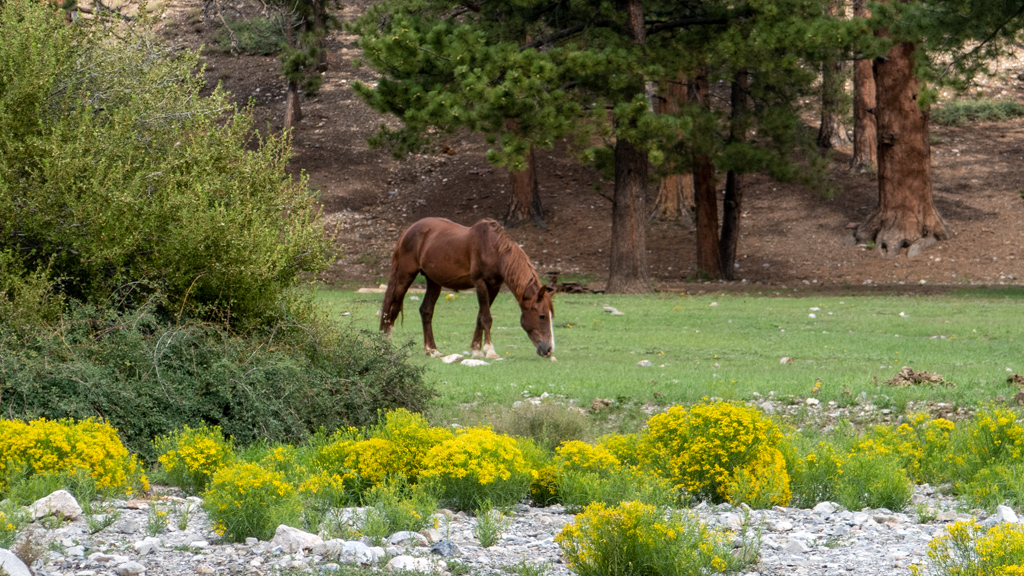 Our trail of choice was Upper Bristlecone. We made it to the trailhead, which was right next to the Lee Canyon ski resort. 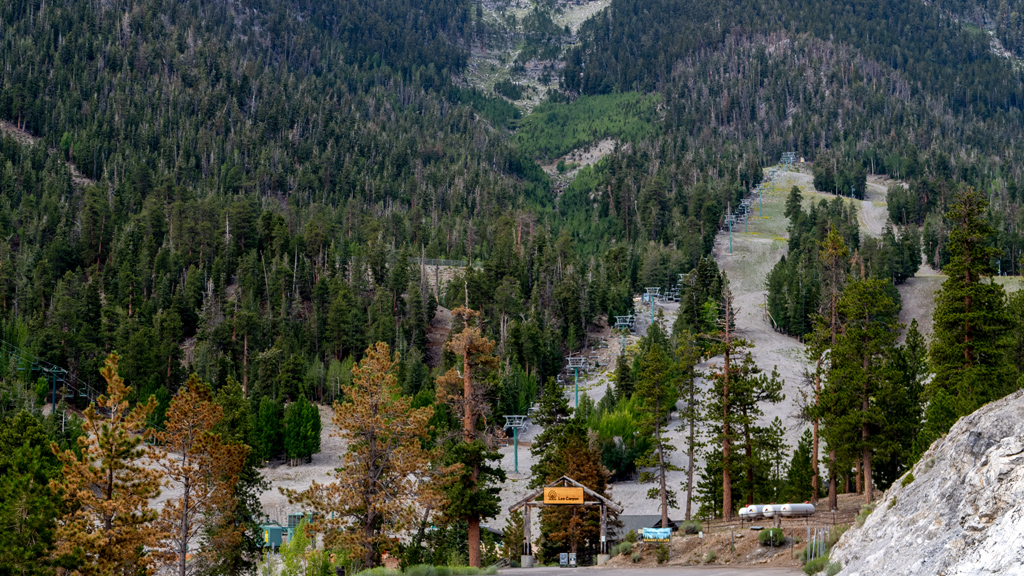 Near the trailhead was a large helicopter landing area. I walked over to the edge of the landing zone and snapped a photo of the mountains to the north­east. 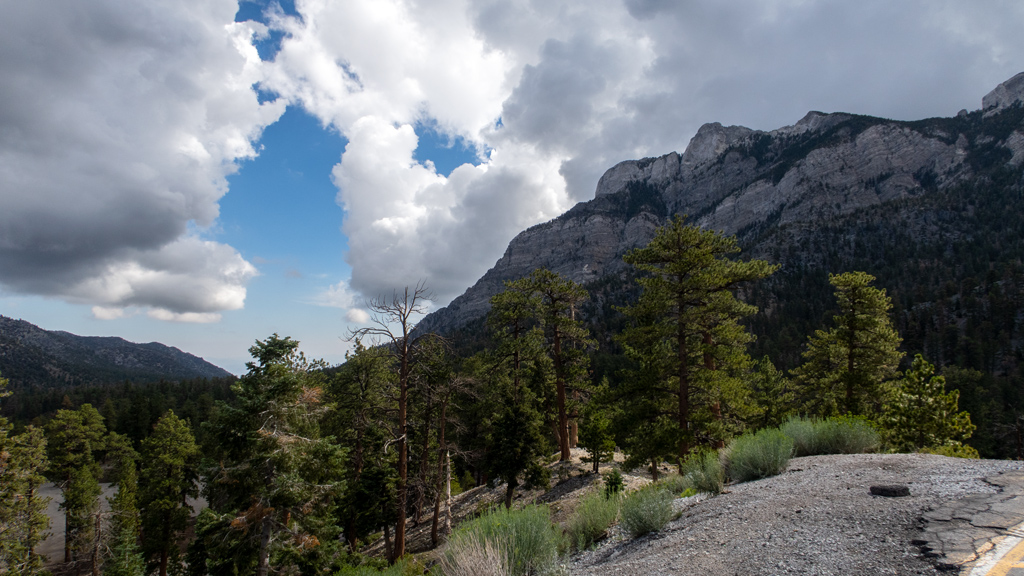 The trail itself wasn’t too special for a majority of the hike—it was basically just a well-formed path cutting through forest. I did come across a few wild­flowers, like this red one. 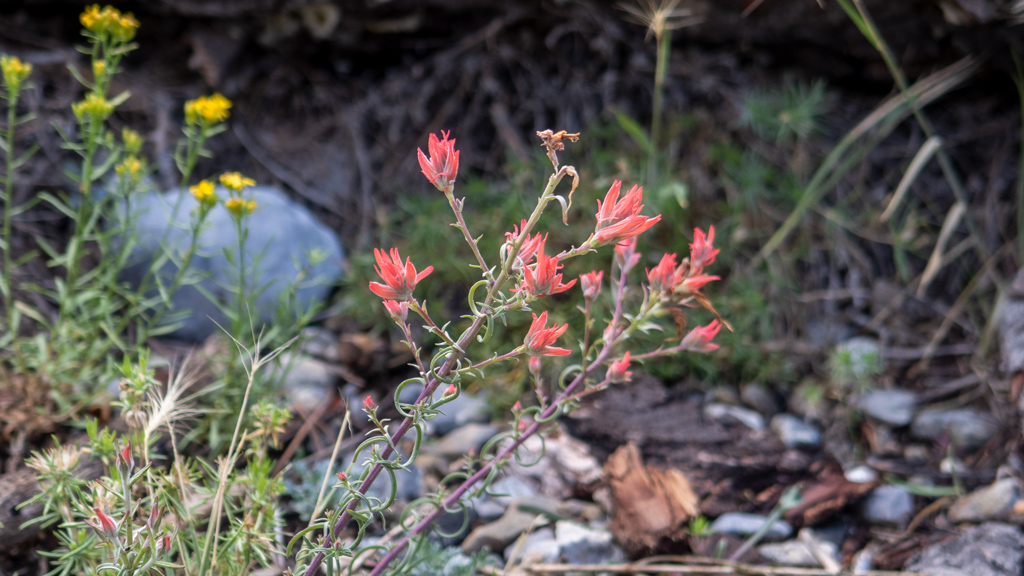 Being a breed with a double-layer coat, Zumo got very warm very fast, and he had to take a lot of breaks to cool down. 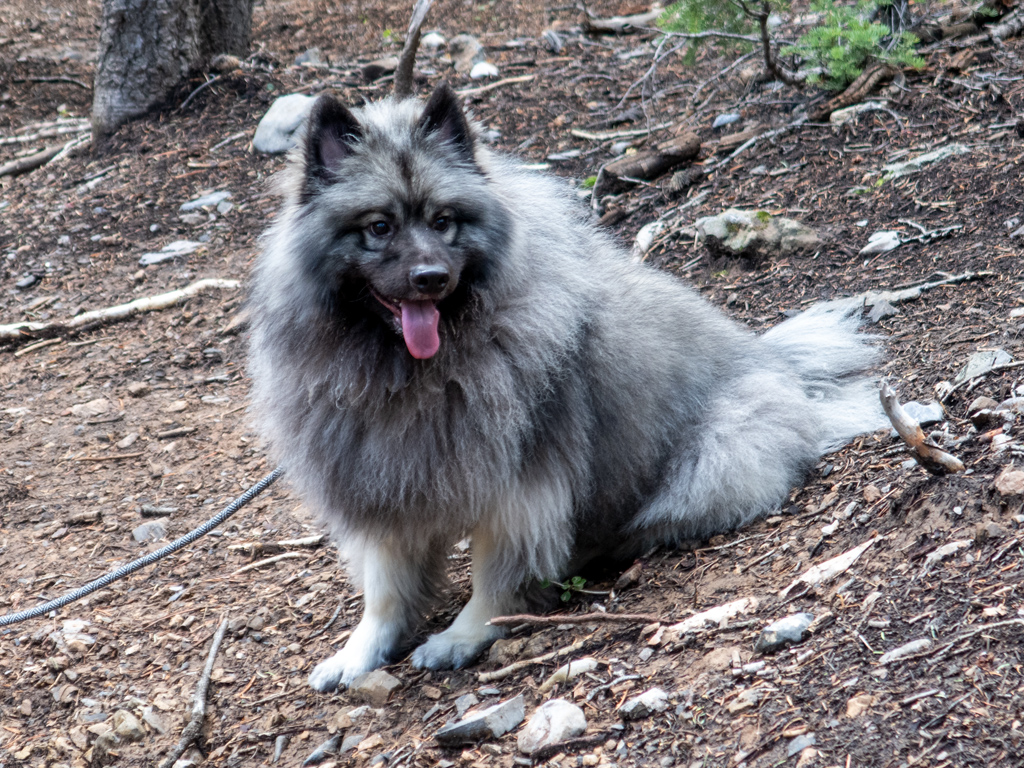 In a sparse area of the forest, we found a little hut made out of branches and tree trunks. One of them even had a little entryway, so I climbed inside with Zumo for one of our breaks. 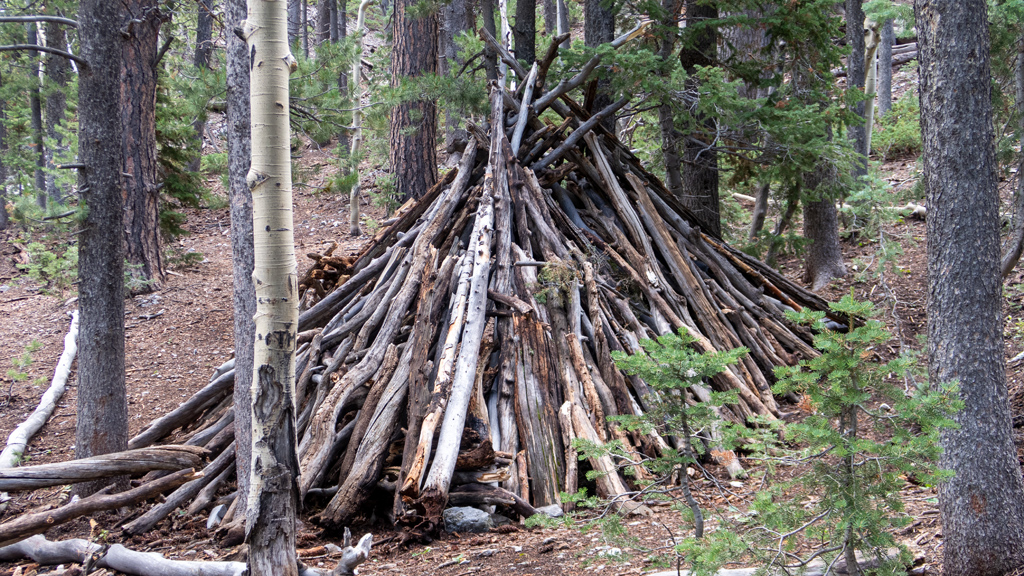 Eventually, we made it to the lookout point of the trail, which I guess you could consider the summit (there was no true “summit” because the trail con­tinued to an intersecting point of Upper and Lower Bristlecone, before turning into the regular Lower Bristlecone Trail). Immediately upon arrival, Zu­mo found some nice, cool rocks on which to lay down and cool down. 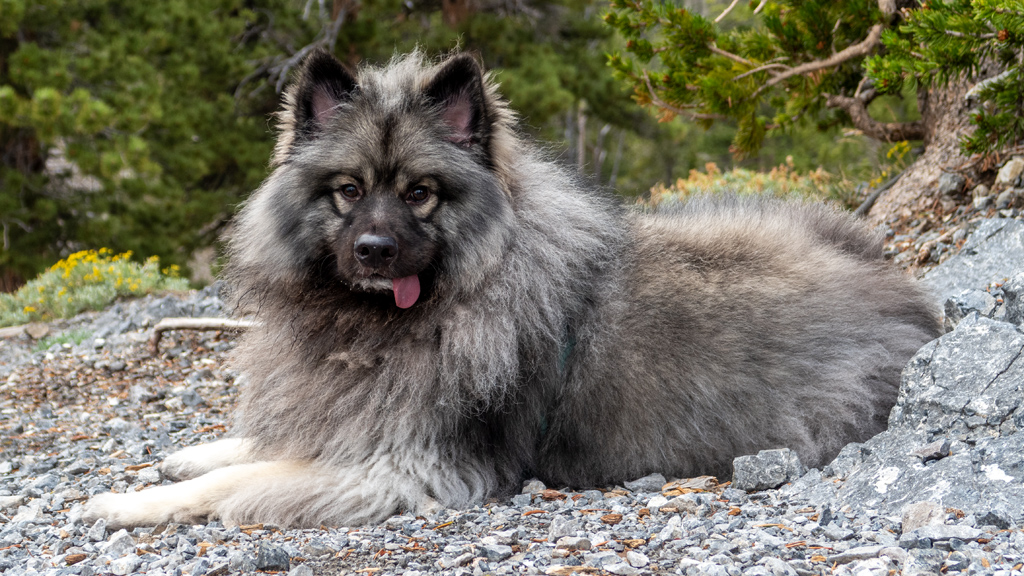 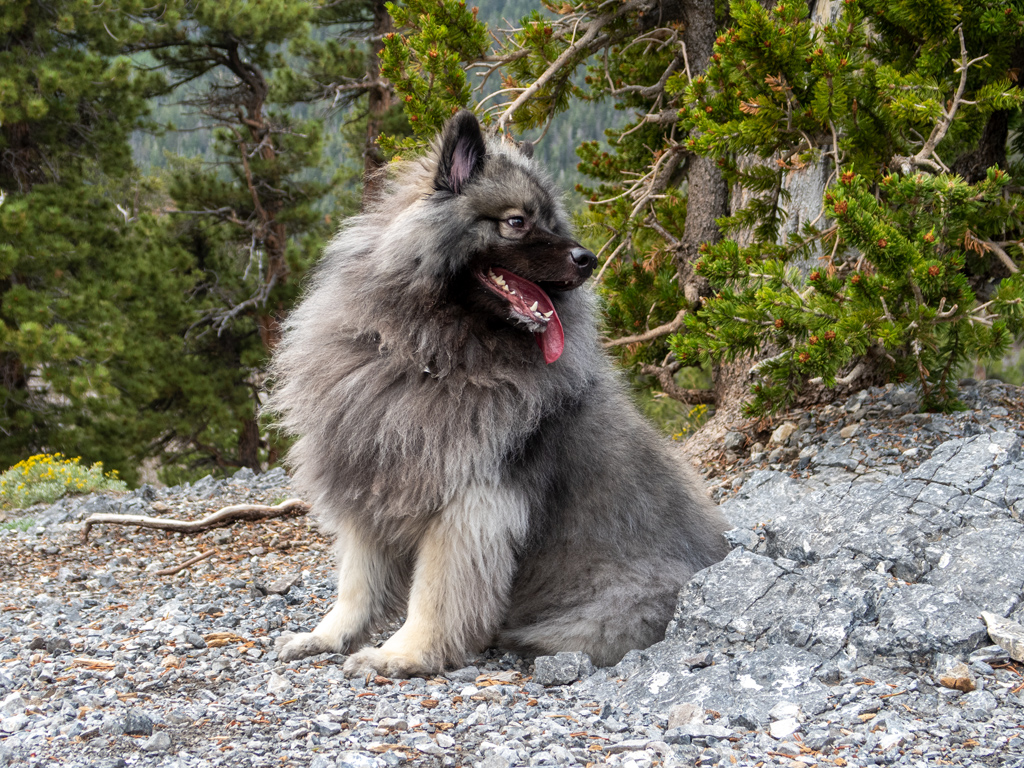 By this point, a thunderstorm had started to roll in. There was a decent amount of cloud coverage over by The Sisters…

The lookout point had a tree that was blossoming flowers with a very unique scent.

The storm clouds were rapidly approaching and it started drizzling, so we started making our way back down the mountain.

We arrived back at our vehicle just in time—with literally about half a minute to spare, it started pouring rain right as we got Zumo cleaned up and back in the car.

Unfortunately, my Fitbit activity tracker refuses to start tracking if I don’t have a data connection at the beginning of the hike (even if it can catch a GPS connection), so I wasn’t able to map this hike. However, based on other people’s maps on All Trails, it looks like our round-trip total was 3.2 miles (5.15 kilometers), with an elevation gain from base to lookout of 626 feet (191 meters).

Because the starting elevation was 8,692 feet (2,649 meters), the oxygen was sparse and it felt like much longer of a hike than it actually was. Even with the decent number of breaks we were taking to allow Zumo to rest up, I still got a little out-of-breath at times, and wished I had brought more than just a 28 fluid ounce (828 milliliter) bottle of Gatorade Zero.

There are a lot of great hikes at Mt. Charleston, and if it’s your first time, I’d recommend something like Cathedral Rock instead. Regardless, it was a good hike at Upper Bristlecone, and it was a nice opportunity to get away from the 100+°F (38+°C) heat of the Las Vegas Valley for a bit.