On the rare days that it wasn’t raining, I squeezed in a few walks around the downtown Calgary area. It actually reminded me a bit of my walk around down­town Spokane, in that there was a lot of nature directly surrounding downtown, and it was designed in a way that made it very pedestrian-friendly.

For my first walk, I went to Pearce Estate Park, which isn’t quite exactly in downtown, but was nearby in the Inglewood neighborhood by the zoo. A short walk from the parking lot on Bow River Pathway led to some nice views of the Bow River. I am assuming it was because it rained a lot recently and it washed a lot of dirt into the river, but the water was unusually brown, opaque, and muddy. 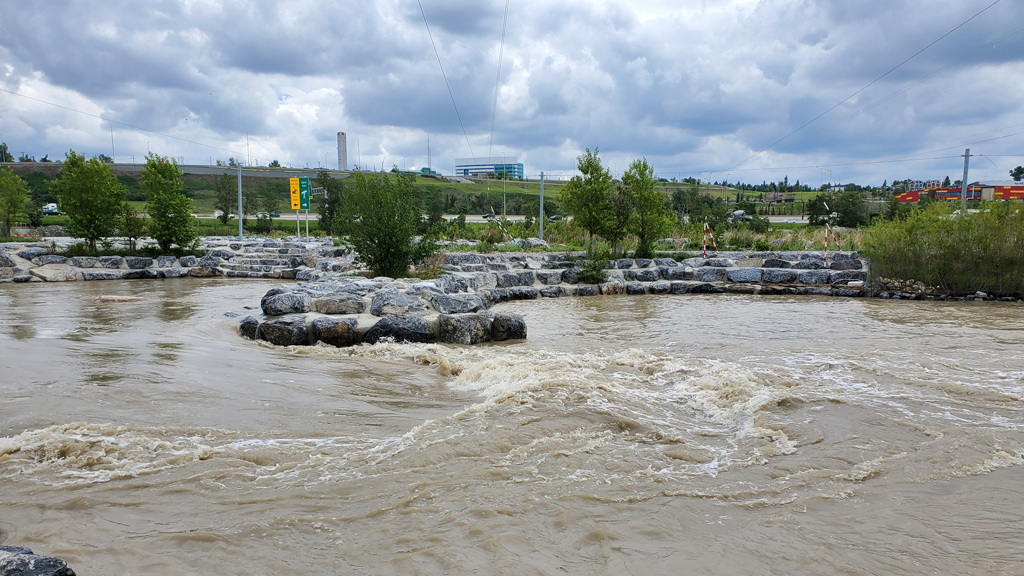 Continuing northbound on the shoreline made me end up at the Harvie Passage Lookout, a nice structure surrounded by flowers that had an elevated view of the Bow River, Hughes Island, and the surrounding area. 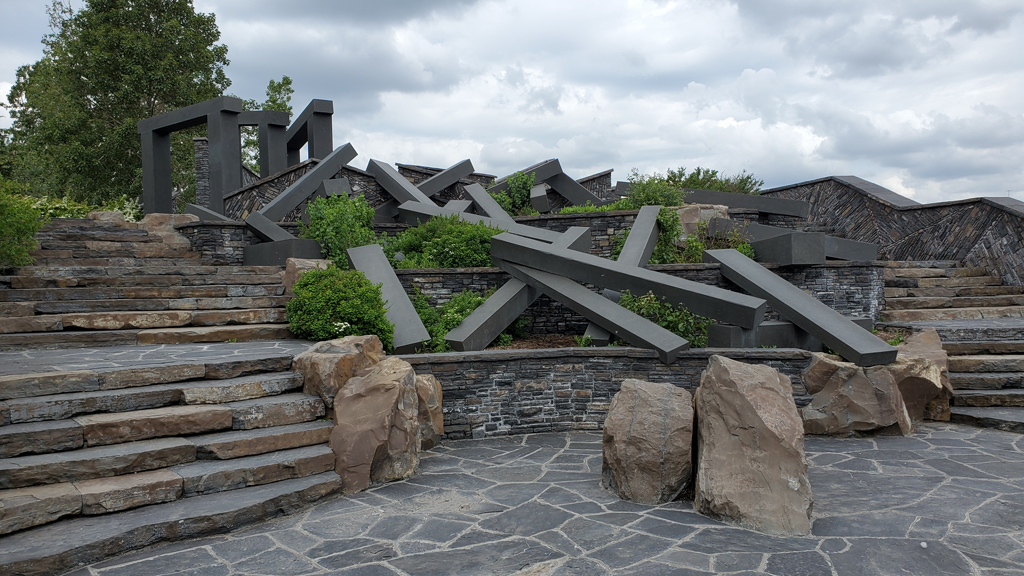 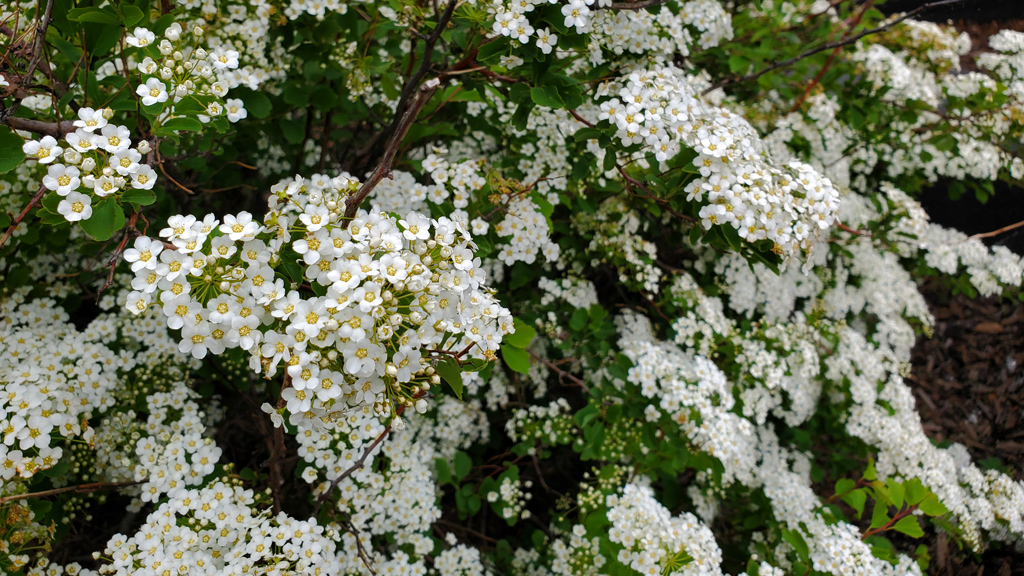 After going as far as I could on the sand, I cut back into the park and explored the winding paths and smaller trails in the center of the park. There were a few small ponds and waterfalls, as well as some open areas where people were having picnics. The landscaping crew was also out maintaining the park, so large sections of the park had the nice, refreshing scent of freshly-mowed grass. 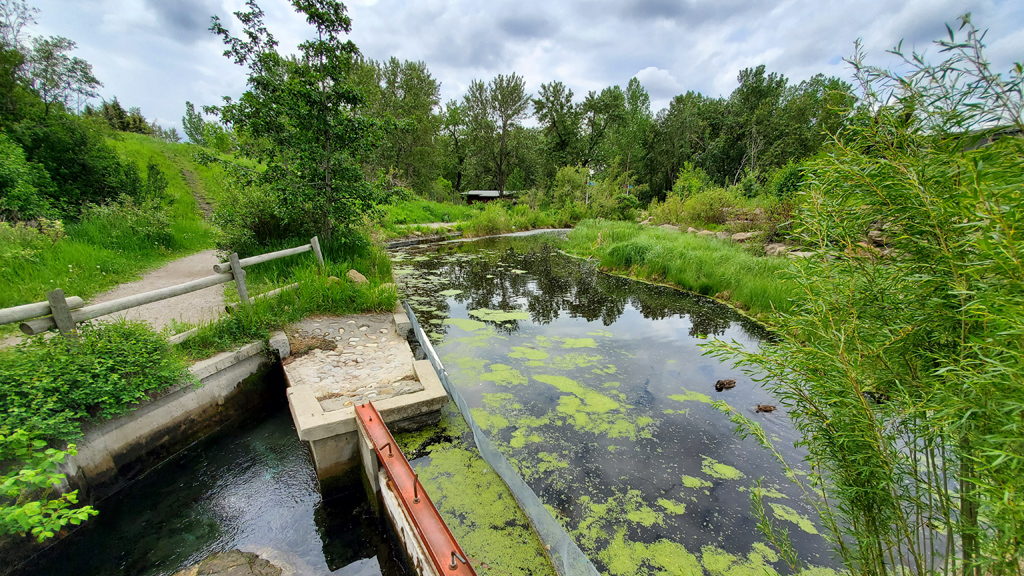 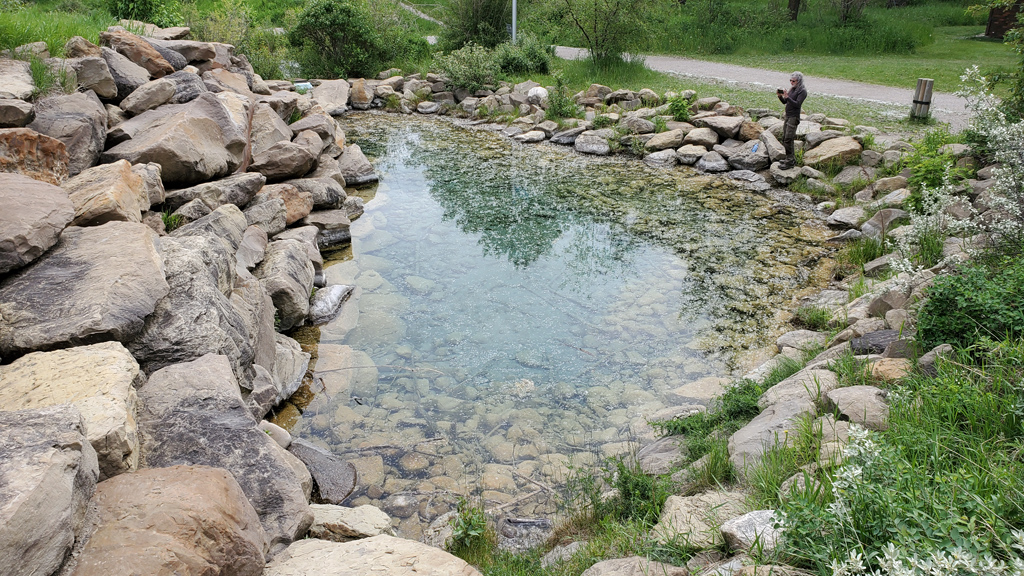 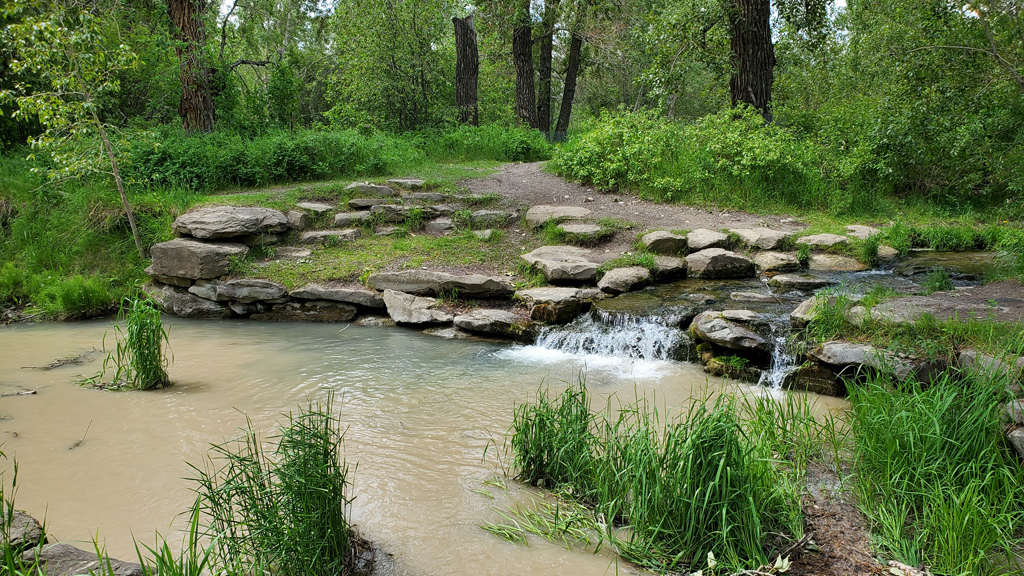 For my next walk, I wanted to get a bit closer to downtown. As is expected for a downtown area, parking was paid, so instead, I parked on 1 Street North­east (yes, apparently Calgary names its streets with numerals, rather than cardinals like 1st, 2nd, 3rd, etc. like the United States does) over by Rotary Park in a free parking zone. From there, I cut through the park, crossed Centre Street North, walked down Memorial Drive Northwest, and went onto Prince’s Island. 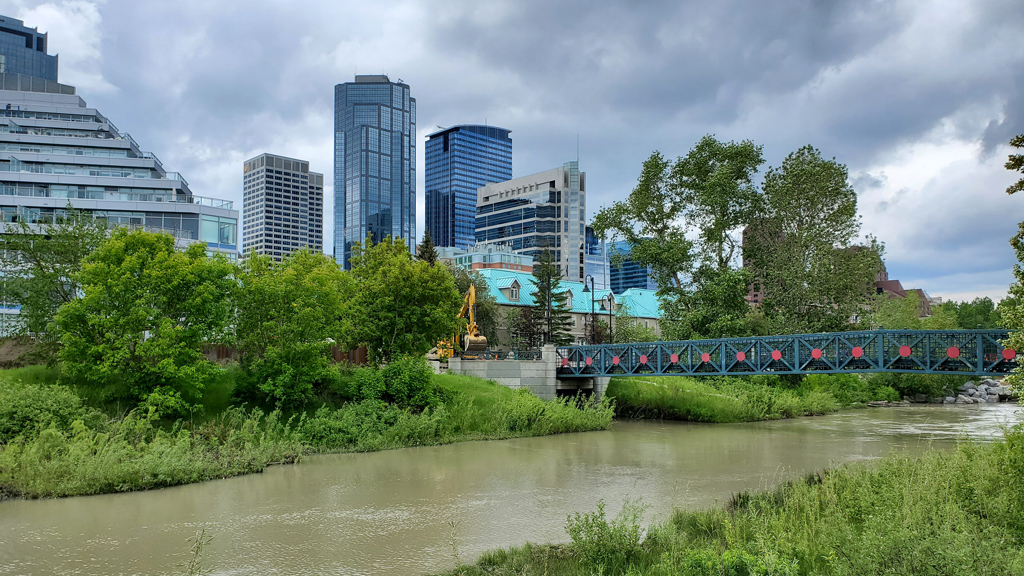 With a t-shirt, gym shorts, sneakers, and white above-the-ankle socks sticking out, I don’t think I could’ve looked more like a tourist. I ended up getting stopped by every single solicitor asking me to buy something from their business or donate to their charity. I felt like I had been walking pretty briskly the entire time, but according to my GPS tracker, my mile split times were comparable to climbing up a mountain because of them. 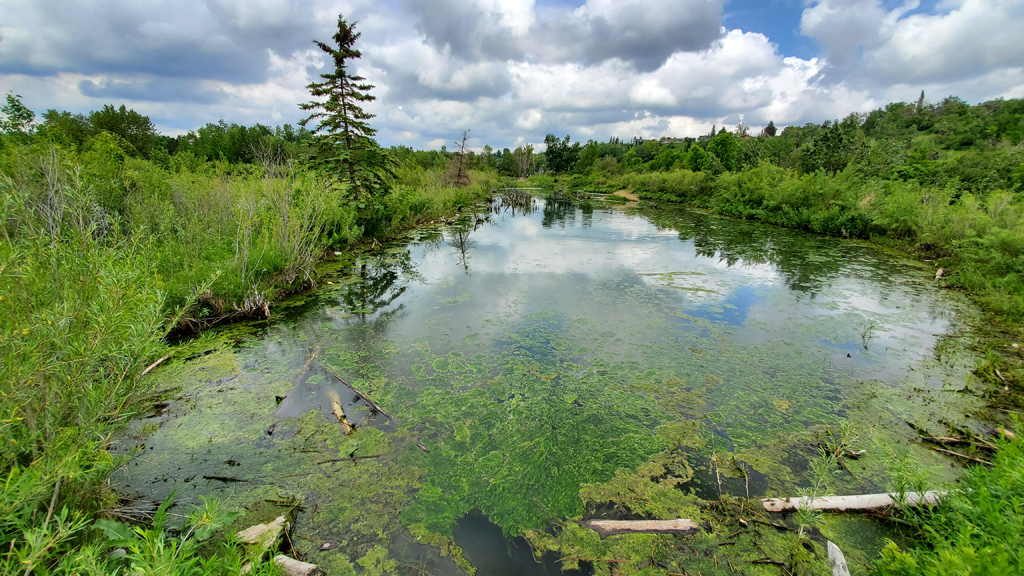 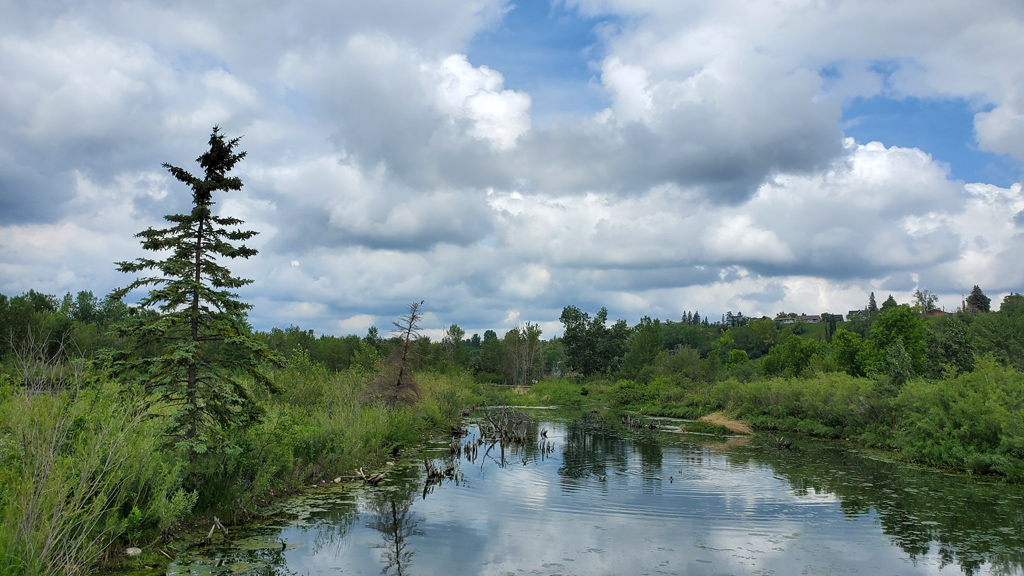 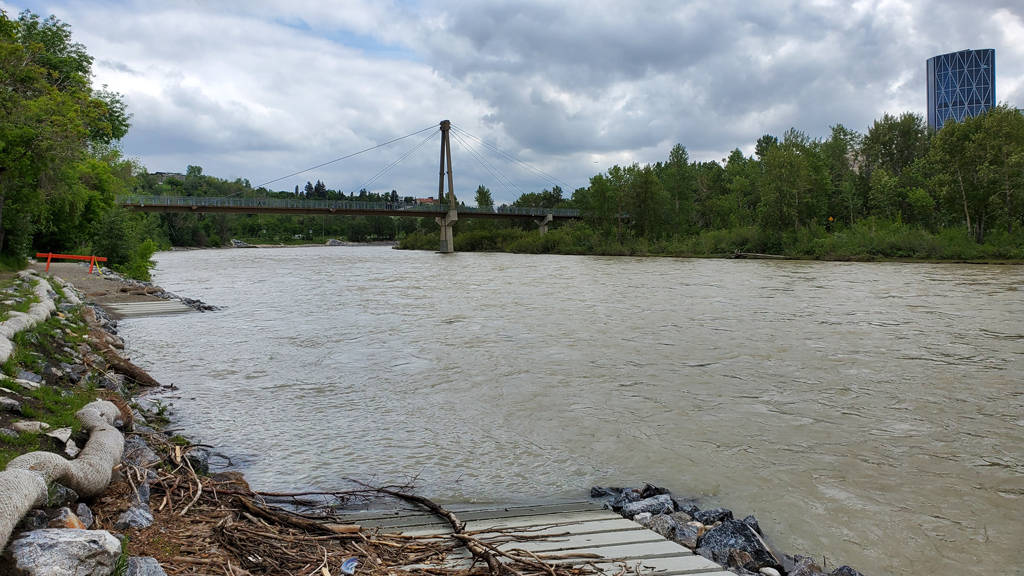 On my way back to Rotary Park where I parked, I stopped by Mt. Pleasant View Point and got a nice shot of the Calgary skyline. 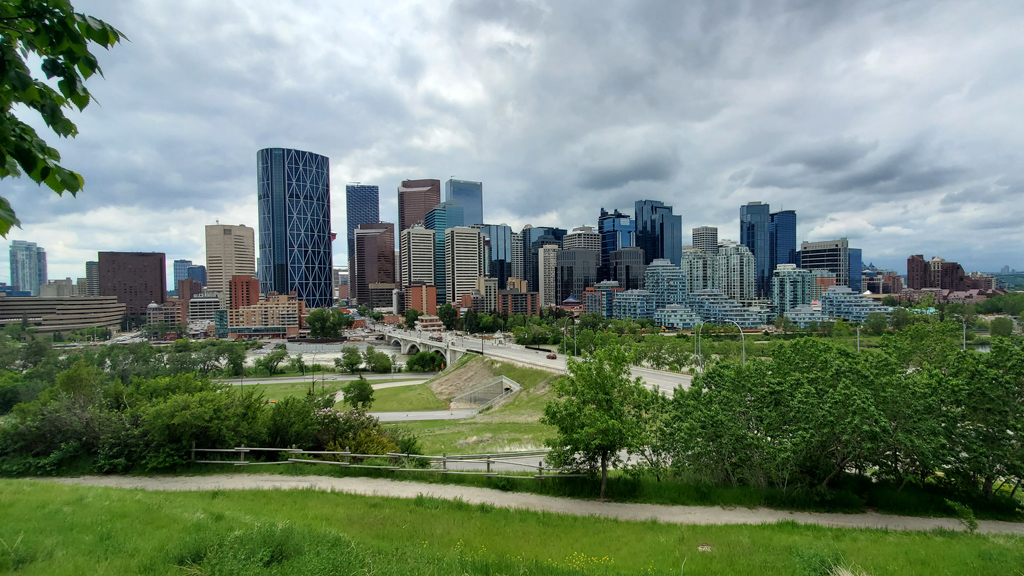 The GPS tracking map probably isn’t as interesting for these walks as they usually are for real hikes, seeing as I was just walking on paved roads and tak­ing a lot of stops to capture photographs and tell solicitors I’m not interested in what they were offering, but here they are anyway: