After making my way across the state of Utah, I decided to take a stop on the east side in Moab, a city nestled conveniently between two national parks, Can­yonlands National Park and Arches National Park. I decided to visit Canyonlands first.

After traveling on US Route 191, I turned onto Utah State Route 313 and took the scenic drive south into Canyonlands National Park. My first stop was at the Shafer Canyon Overlook in the Island in the Sky district. 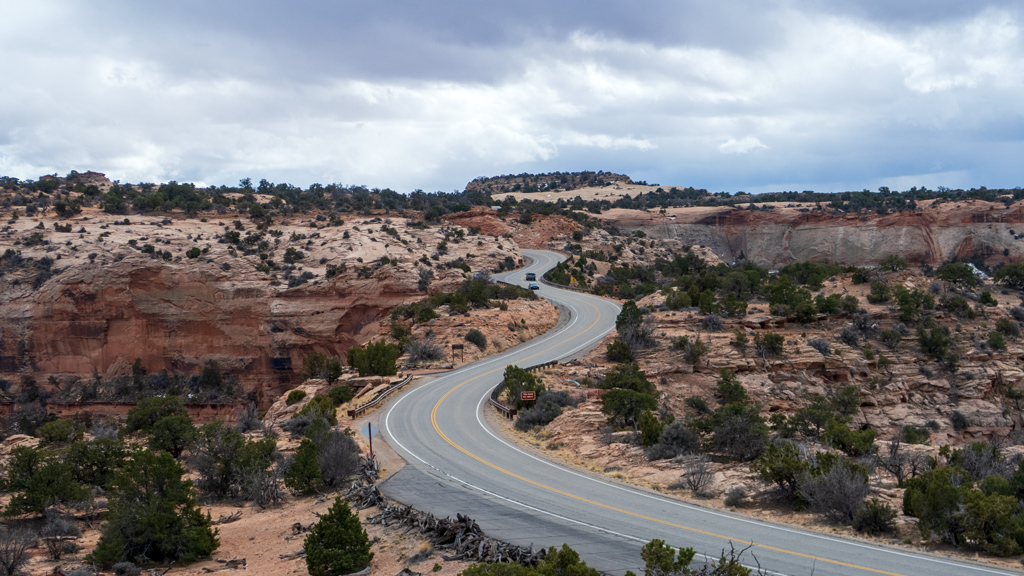 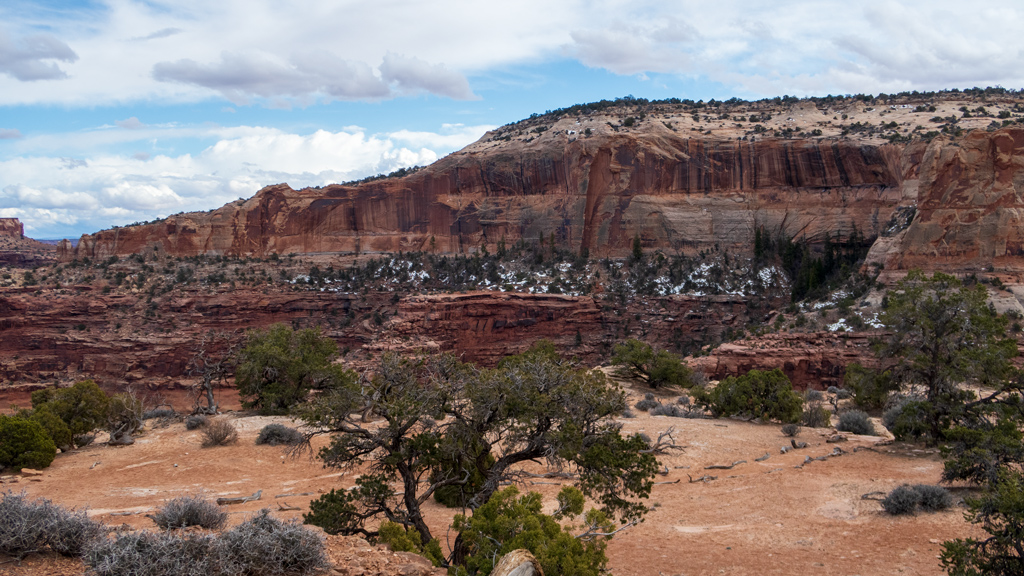 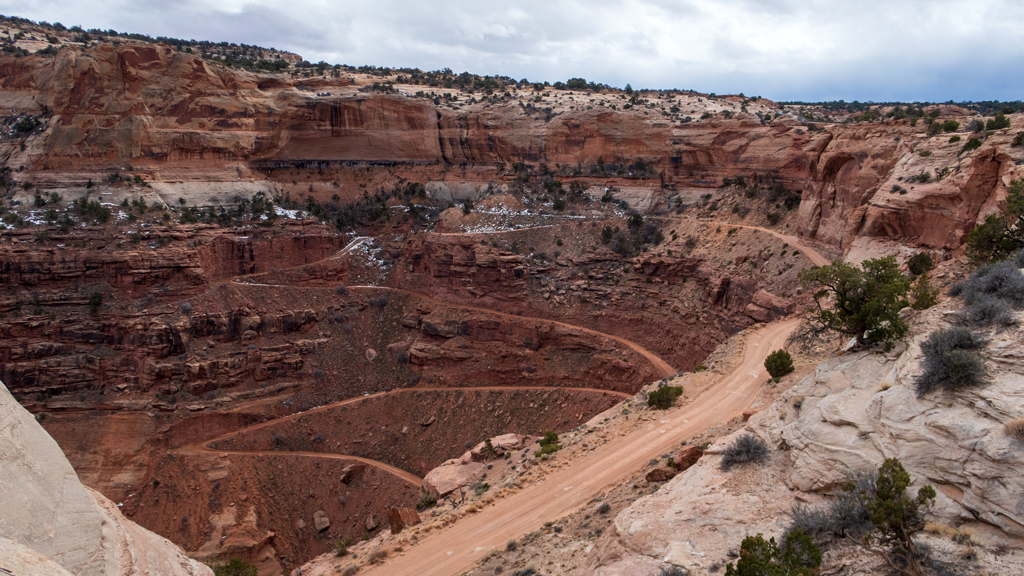 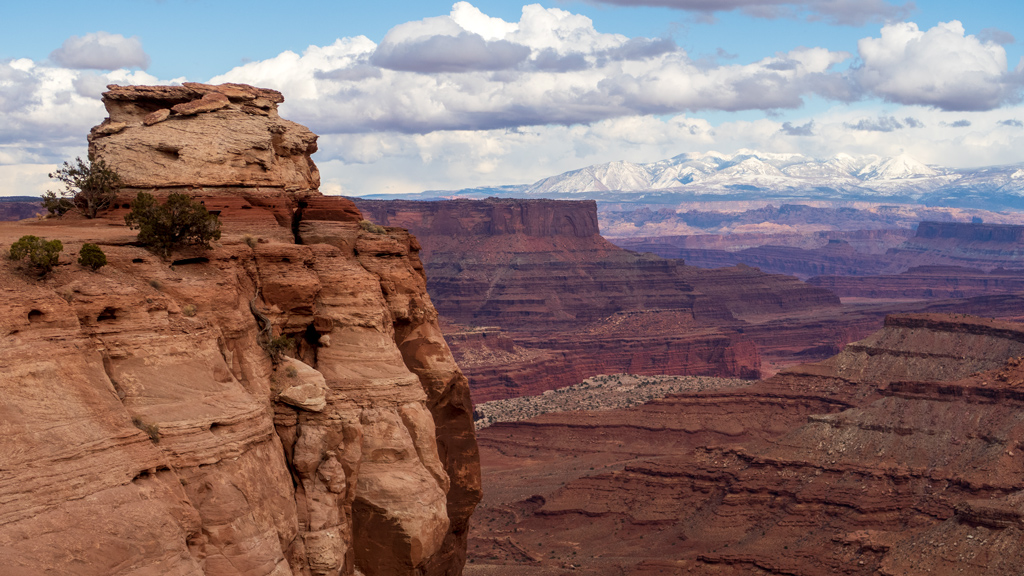 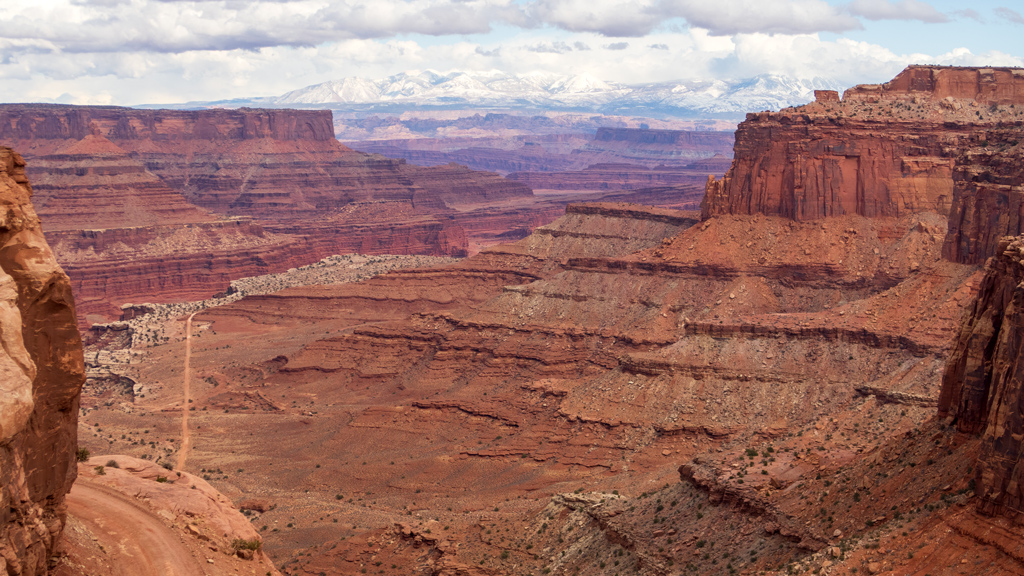 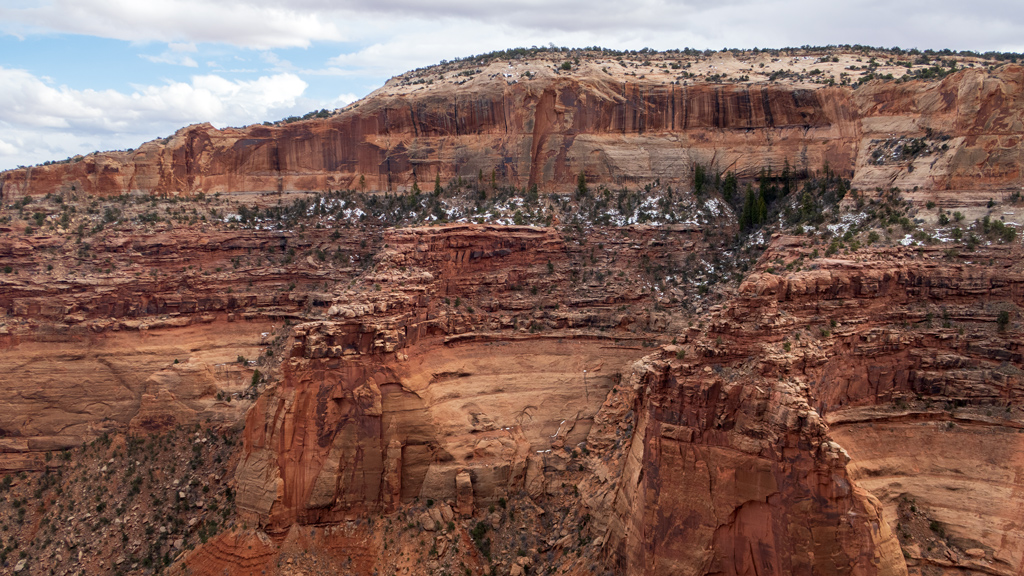 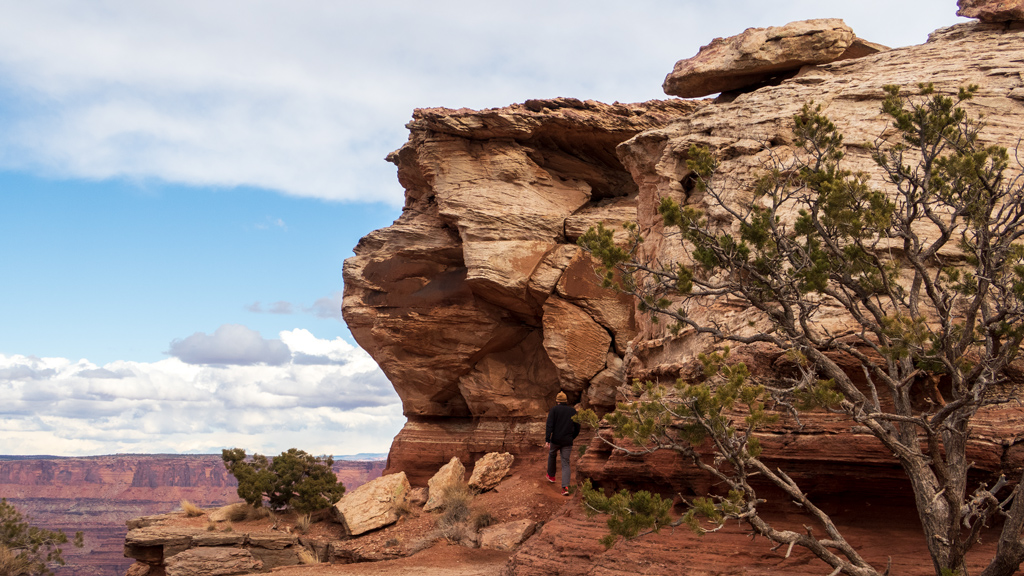 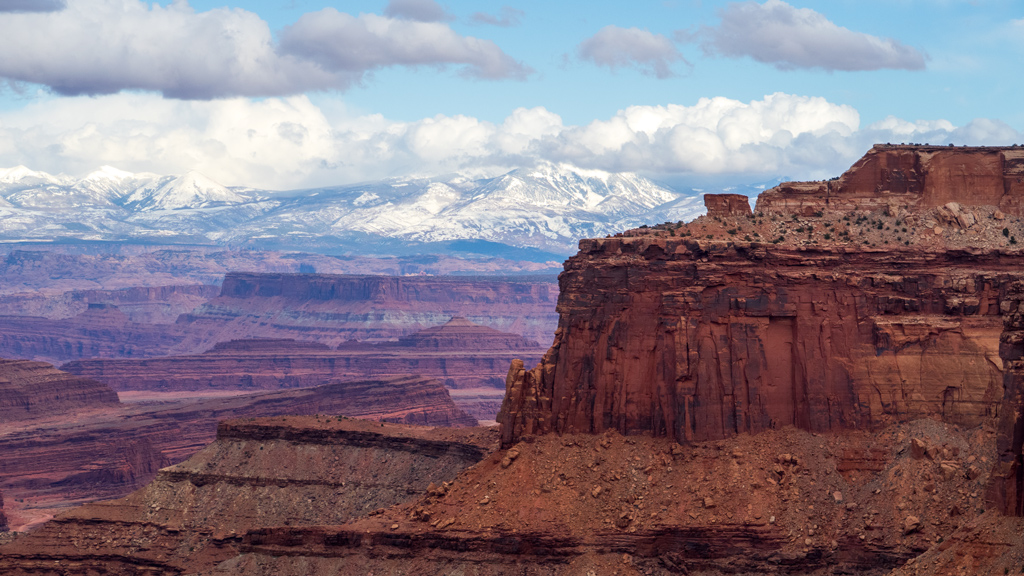 After taking in the views and capturing a lot of photos, I noticed that it was slowly becoming more gloomy, and there were dark clouds forming in the distance. Assuming that there was incoming inclement weather, I decided to drive straight to the end of Grand View Point Road to see the summit first, as I figured it would most likely start snowing at higher elevation faster.

By the time I drove past Mesa Arch, it was on the verge of raining, and right as I was passing the Buck Canyon Overlook, it started snowing. By the time I made it to the White Rim Overlook, it was hailing, but I had already come too far, and I had to go all the way up to Grand View Point.

By the time I finally made it to Grand View Point, there was absolutely no view. The snowstorm had picked up at a breakneck pace, and the “view” I had was basically what you see in the top third of the photos below, but literally everywhere instead of just in the sky. There was no visibility, and if the paved sidewalks weren’t there, it would’ve been a very real possibility for someone to just walk straight off the bluff. Needless to say, I opted not to hike the Grand View Point Trail to the overlook.

Trying not to get a concussion from the hail, I scurried back to my truck and started driving back down. I captured some photos along the way of the calmer areas, but the snow had swept through the entire national park, and even hit all the way down to the hairpin turns by South Fork Sevenmile Can­yon. There was a decent amount of traffic backed up of other tourists who had the same idea as me and wanted to make it back down to Moab be­fore the snowstorm turned into a blizzard. 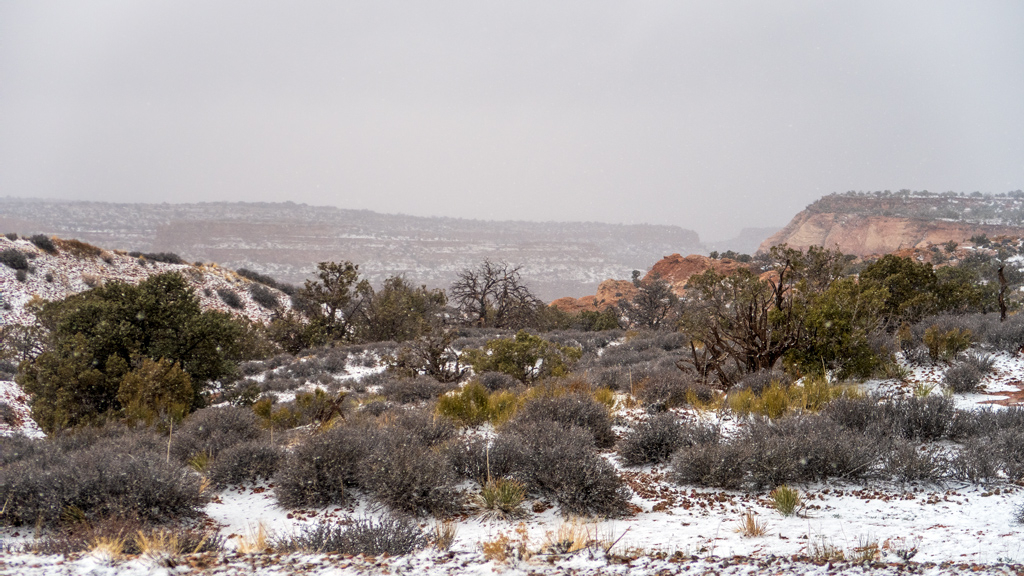 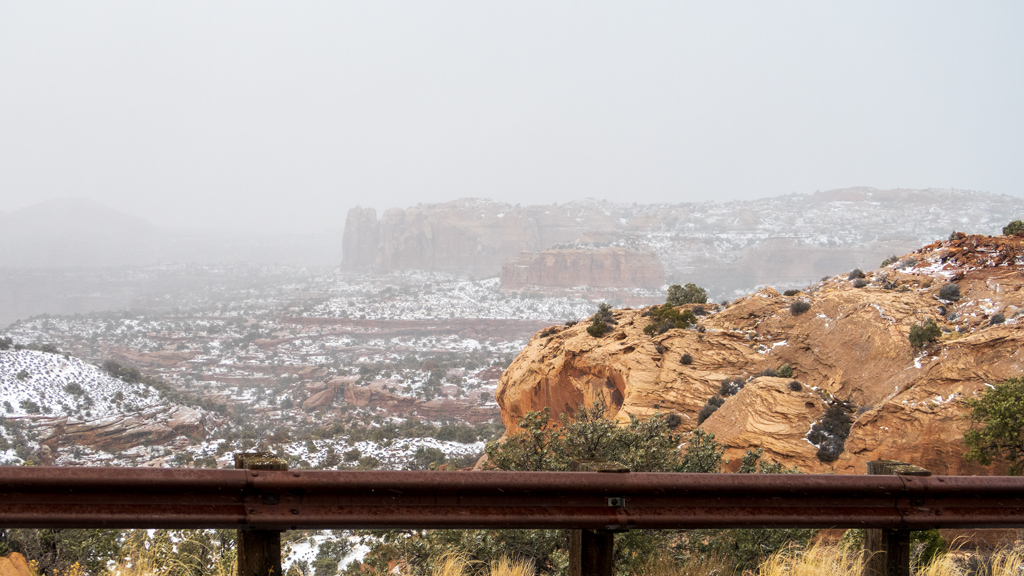 Although it was a bit unlucky that the weather was unconducive to a hike, the parts I did get to see were nice, and it was pretty seeing the desert veg­e­ta­tion peeking through a blanket of white, which I imagine most other people wouldn’t have an opportunity to see if they visit over the spring, sum­mer, or fall.