Ever since arriving in Southern California in December 2021 to take a two-month break from road tripping, I haven’t really been doing too much except for working and resting. This is probably evident by the fact that I haven’t published any travel-related blog posts apart from my Christmas trip to Palm Springs; it’s not that I’m getting lazy, it’s that I just haven’t been doing anything interesting.

I’m still exercising regularly and going for walks around Naples Island where the company headquarters is located, but apart from that, there isn’t really much to do around here. The traffic is horrible so it takes an exhausting amount of time to go anywhere, most tourist hotspots have admission ticket prices that are massively inflated and several times more expensive than what you’d expect elsewhere in the country, and I also haven’t really even felt that motivated to go out and be active.

With that being said, I wanted to make sure I didn’t end up in unhealthy dormancy in the team house until I continue my road trip, so I searched on AllTrails for some good hiking spots around Long Beach and found some nature preserves in Rancho Palos Verdes in the southwestern peninsula. Un­sur­prisingly, I had to drive about 40 minutes, but I figured it would be worth it because of the vast views of the Pacific Ocean from Rancho Palos Ver­des.

This wasn’t my first time in RPV; I was last there a few years ago when I was looking at properties for Tempo‘s PUBG team for the National PUBG League that took place in Manhattan Beach. We ended up getting a house in Redondo Beach, but Rancho Palos Verdes was one of several cities that we were considering. The most memorable part about this city was the fact that I encountered a random peacock just walking down the street at one point, and later Googled it and found out that RPV actually did have a wild peacock problem.

For my hike, I went to the Forrestal Nature Reserve where there was a free parking lot in front of the Ladera Linda Community Center. There were a few different trailheads to which I could have gone, but I picked this one because apparently the other trailheads have a much more complicated parking sit­u­a­tion where you have to reserve a spot on an app and pay $10.

From there, I hiked into the neighboring Portuguese Bend Reserve and immediately saw some nice views of the ocean juxtaposed alongside the homes within the Portuguese Bend Beach Club. 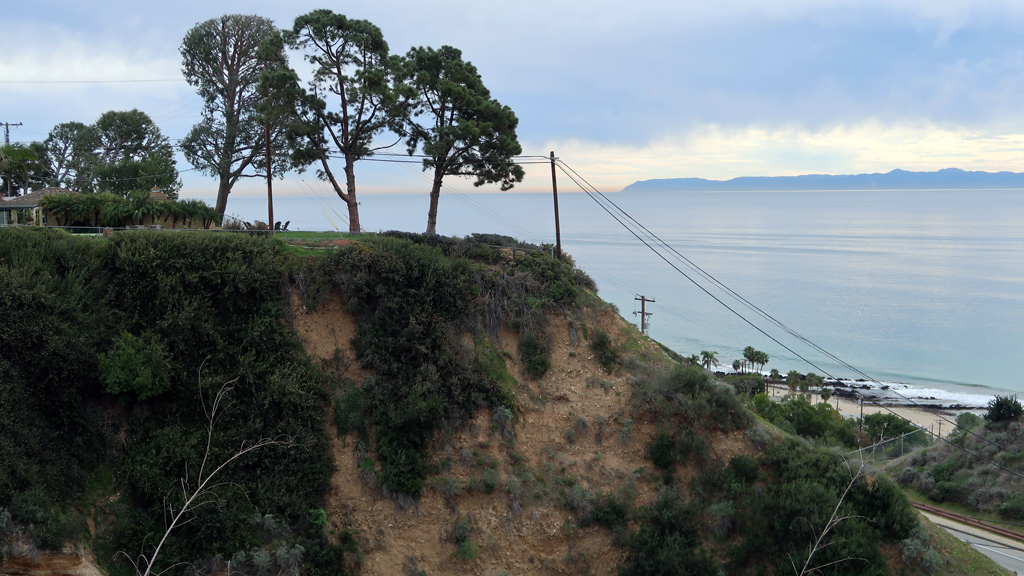 As I got deeper into the hiking trail, I transitioned to the next area, the Abalone Cove Shoreline Park and Reserve. This was my final destination, and the area that had the nicest and closest views of the ocean from this side of the peninsula. There are a lot of private neighborhoods on the Palos Verdes Pen­in­su­la, so part of this hike involved walking alongside motor vehicles on the public road Palos Verdes Drive atop dirt and rocks.

I eventually made it onto Sacred Cove View Trail, which connected onto Inspiration Point Trail. This led to Inspiration Point at the tip of the peninsula-of-a-peninsula, which provided nice views of Portuguese Point and the Terranea Resort to the west, and the Trump National Golf Club Los Angeles to the east. 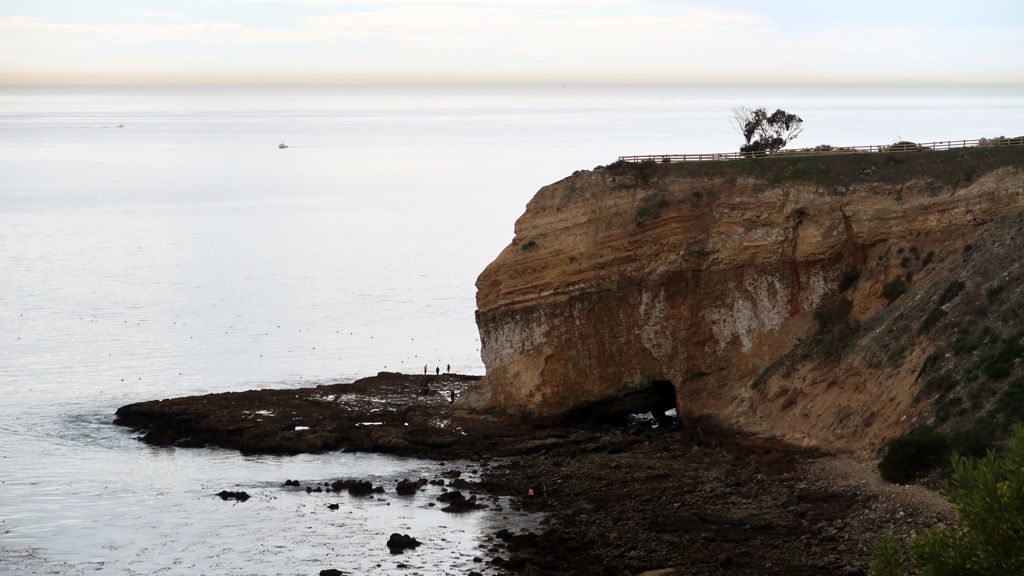 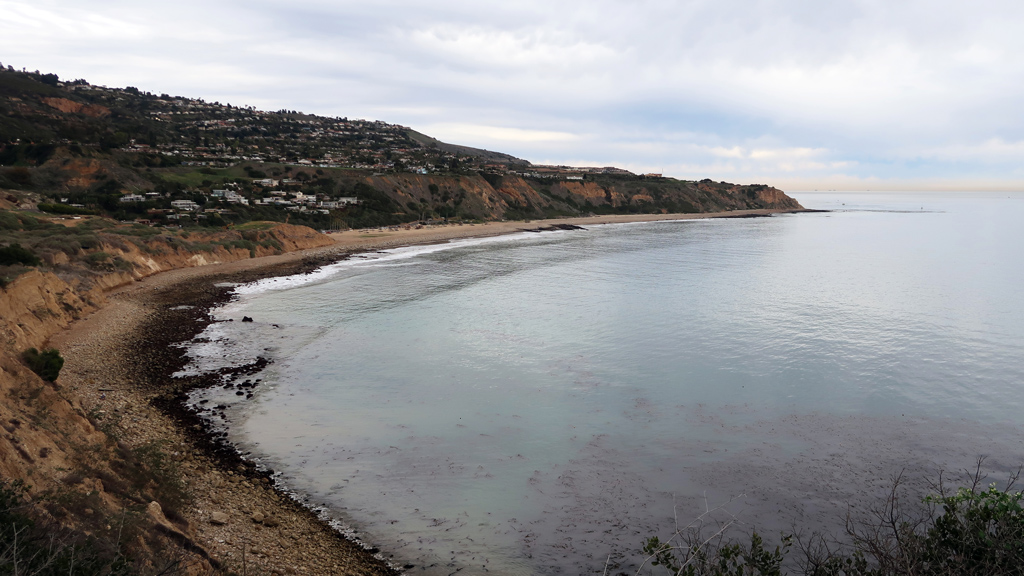 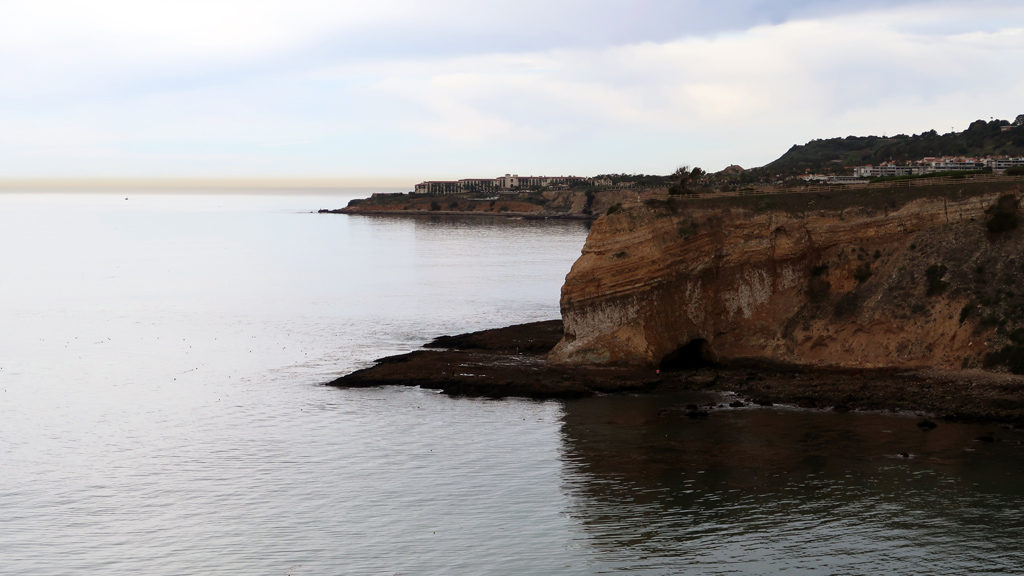 Zooming in to the east gave a nice view of the neighborhood nestled inside Palos Verdes Drive to the south, Conqueror Drive to the east, Dauntless Drive to the north, and Klondike Canyon to the west. I wasn’t able to find a name to this neighborhood or subdivision, but it looked like it was mas­ter­planned because it had a nice tiered layout to the homes, sort of like what they’re doing in the luxury neighborhood MacDonald Highlands of Hen­der­son back at home in the Las Vegas Valley. 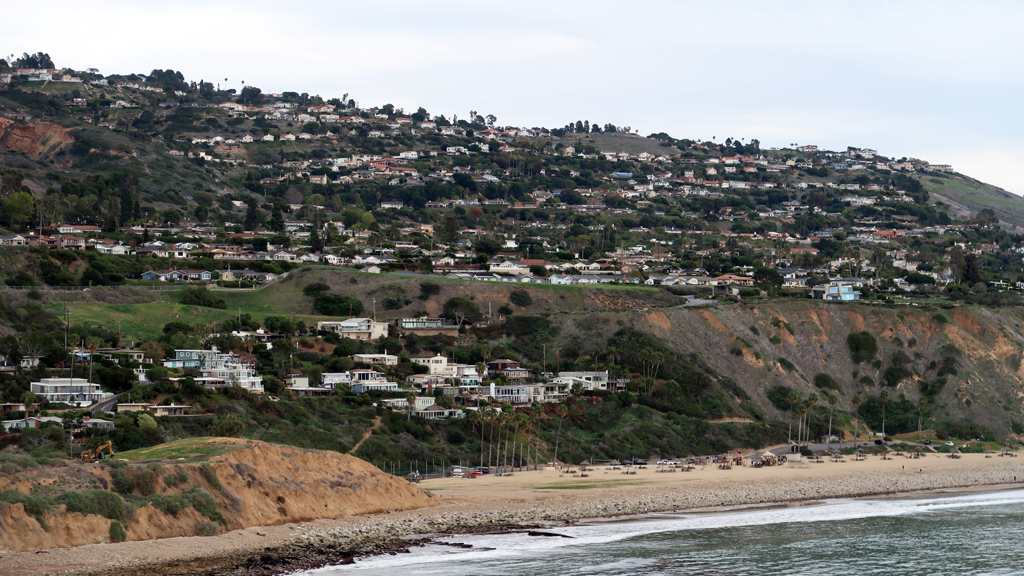 After taking in the sweeping, unobstructed views, I wanted to make my way down to the beach. The hike down was unexpectedly steep, and there were a few signs warning people of unstable cliffs. Staying close to the inside of the path away from the bluff, I slowly descended to the sand.

Far away, I saw someone staring out into the ocean for a long time. I thought it might be someone who’s going through a tough time, finding solace in the calming monotony of the crashing waves, staring out into the vastness of the ocean and realizing that maybe their problems aren’t that bad after all. If I was more extraverted, I might have even gone up to chat with them to show that there are people out there who care. Instead, I just snapped a photo.

I have incredibly poor eyesight. I nearly failed my vision exam when I renewed my driver’s license, and since then, my eyesight has gotten noticeably worse. Often, I will take pictures of things, then zoom in later to realize that the subject of my photograph is not what I thought. I zoomed into the a­fore­mentioned person… and realized that it wasn’t someone in distress. It was just a fisherman. 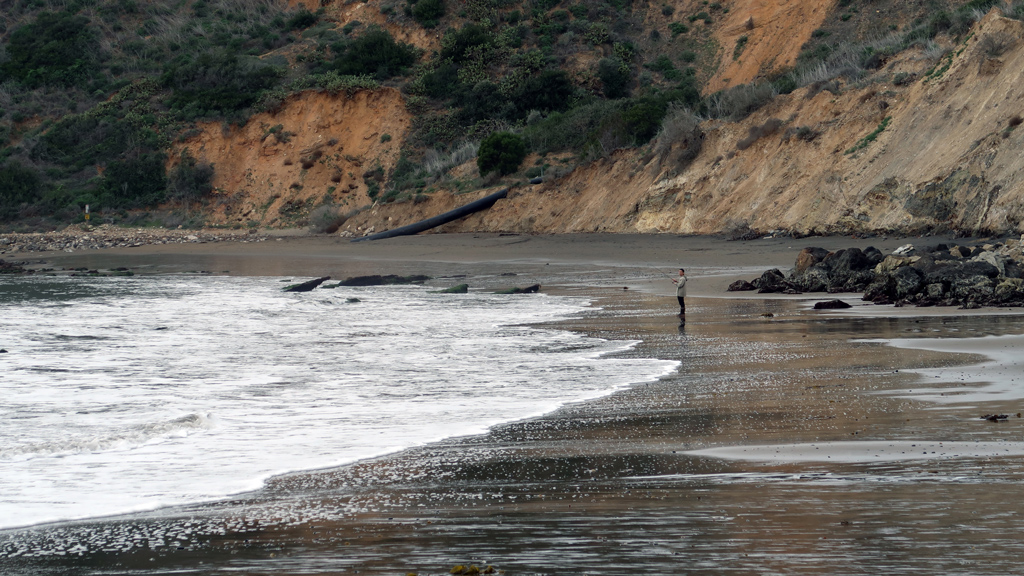 I continued walking out through the soft, gray sand and toward the rocks, which I noticed were different depending on how close they were to the ocean. The ones closer to shore were softer and smoother, while the ones further out were rougher and more jagged. 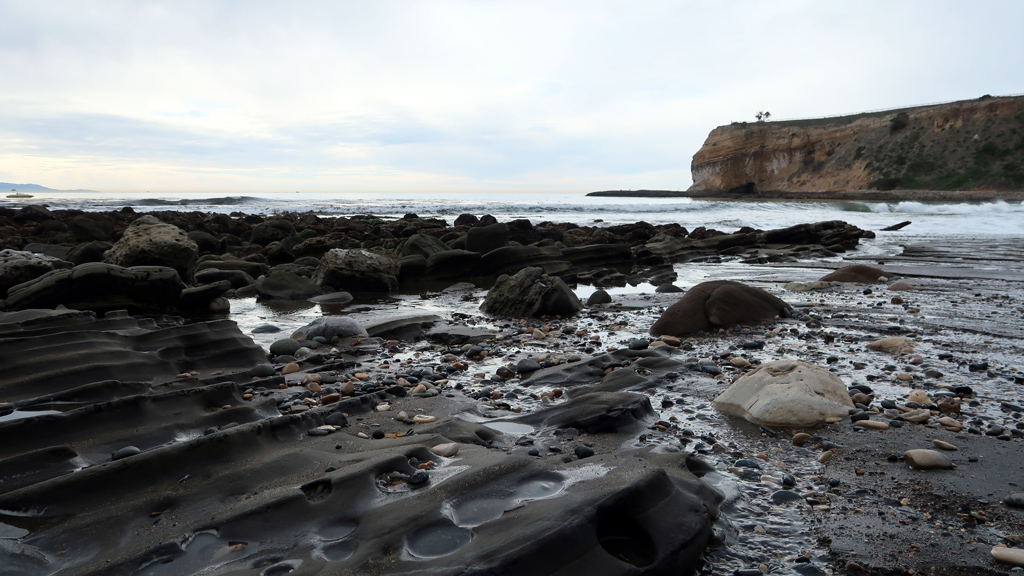 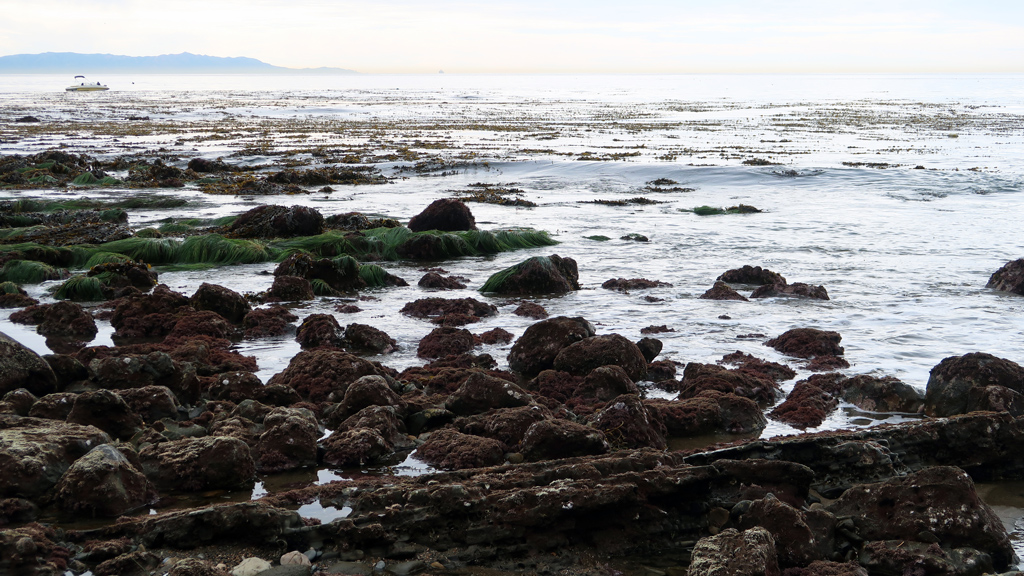 I wanted to see if I could find any signs of aquatic life, so I made my way out onto the rocks. I’m usually fairly coordinated with balance and bodily nav­i­gation, but today, I suffered from a cartoonish fall where I proceeded to slip on a smooth rock, lose my balance, try to use my other foot to catch my balance, slip even harder, hover in the air for a bit, and come crashing down onto my tailbone, right elbow, and left knuckles. If I listened carefully enough, I’m sure I would have heard a comical sound effect play in the background as well.

Miraculously, I landed mostly in the areas that had padding from my jacket, so that absorbed a lot of shock from the impact on the rocks. The epidermis on my right elbow got scraped clean off and my dermis started oozing blood, and my knuckles also got scratched up pretty badly, but I managed to keep my head upright during the fall and was able to get up fine. It was worth it, because I got to see crabs, urchin, what I think were oysters, and a few other sea creatures swimming around. 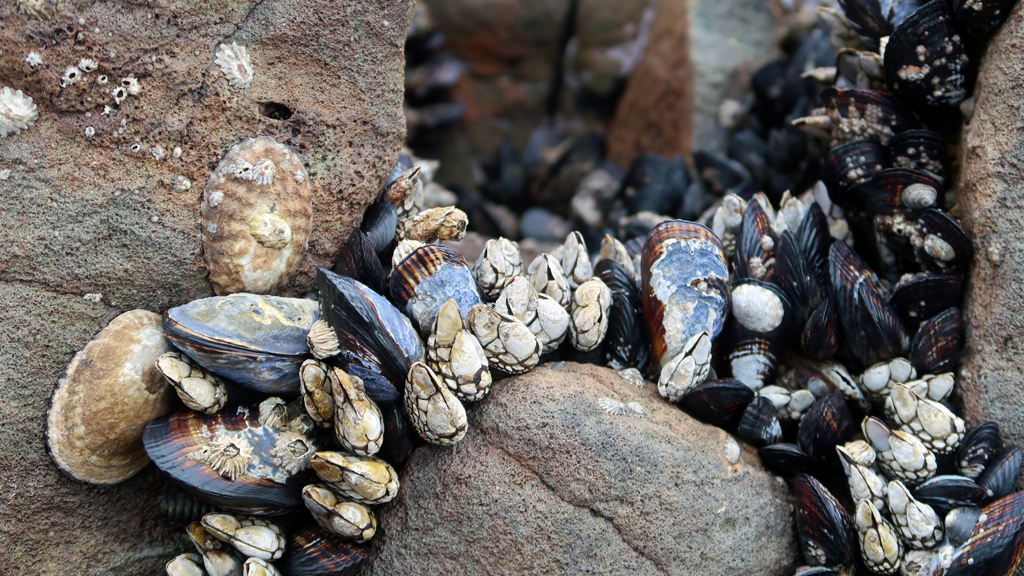 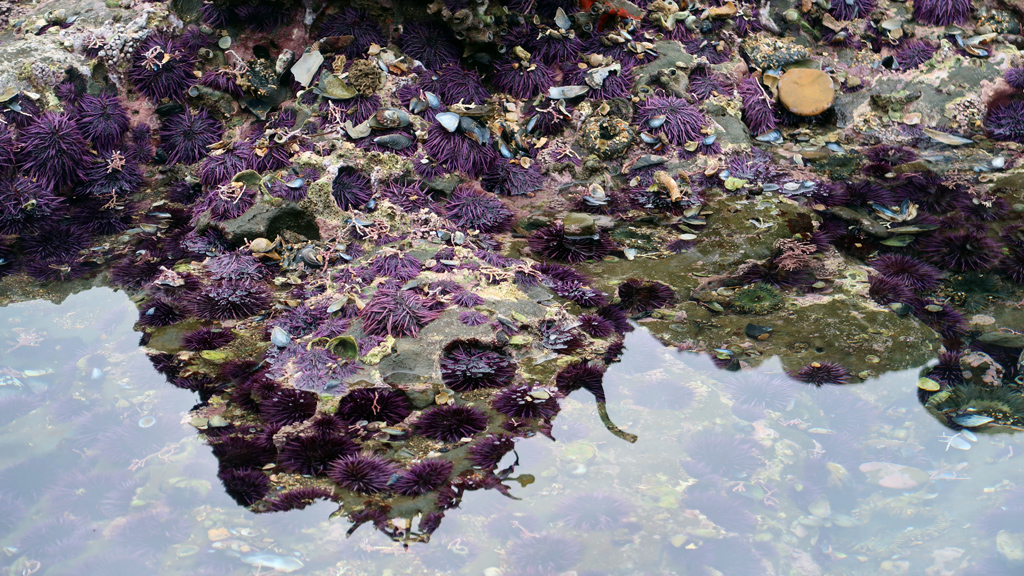 Usually, getting to your “reward” with the nice view is the hard part, then the trip back to the trailhead is easier, but it was the opposite for this hike—heading down to the ocean was a relatively easy descent, then hiking back up to the parking lot was moderately strenuous. According to my fitness track­er, I went up right around 90 floors’ worth of elevation during the hike.

Here’s some bonus content that didn’t make the above-the-fold cut: 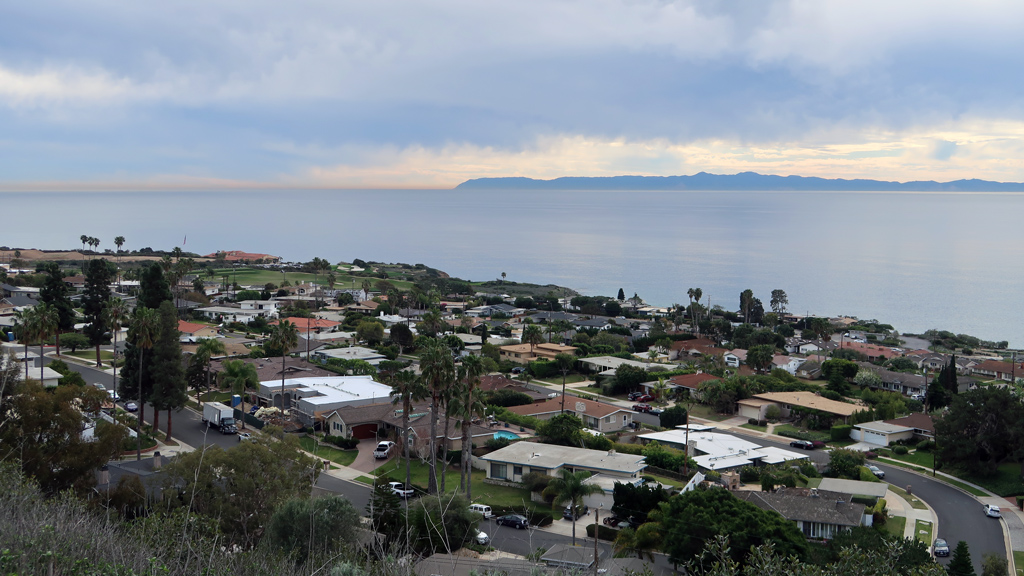 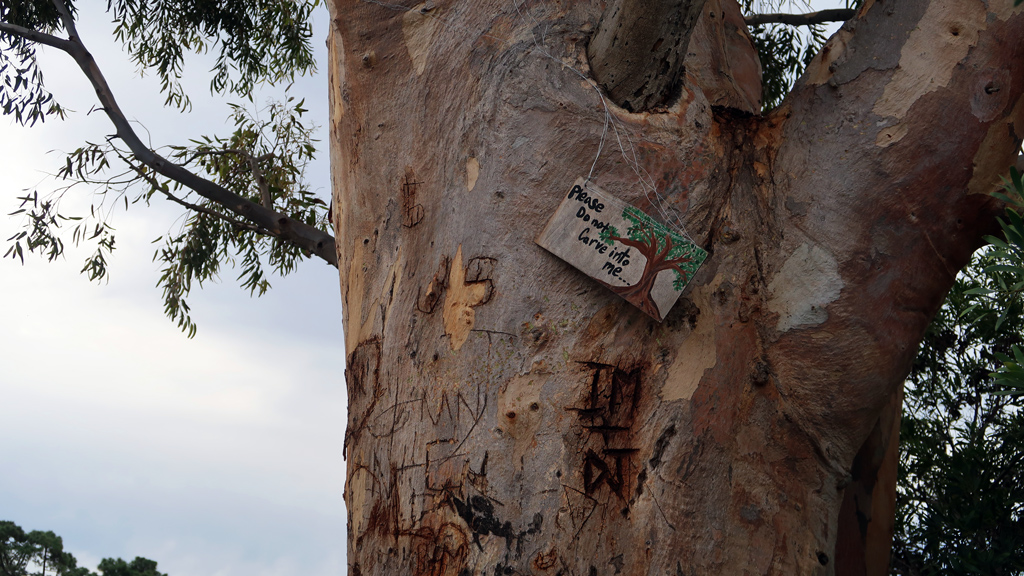 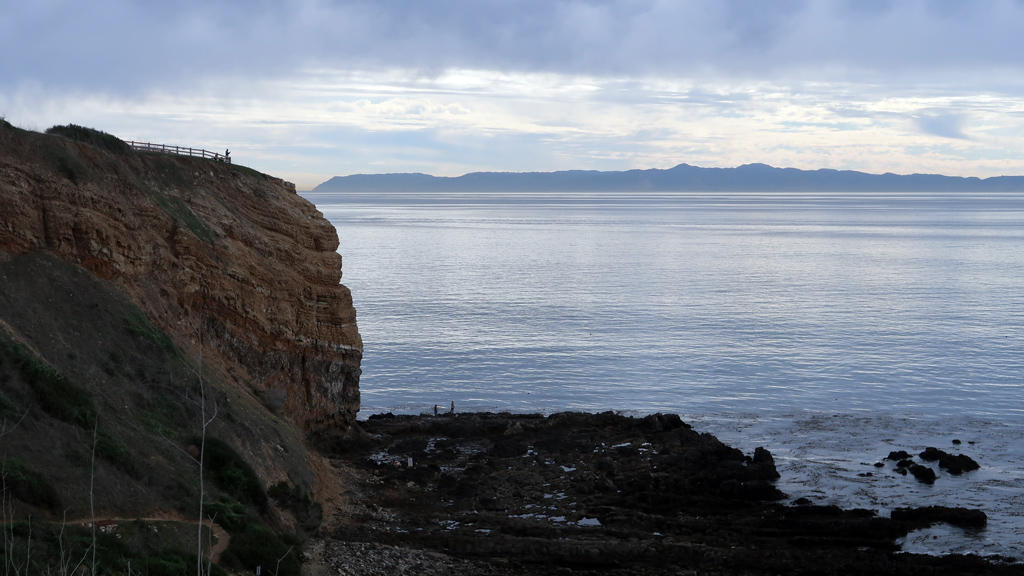 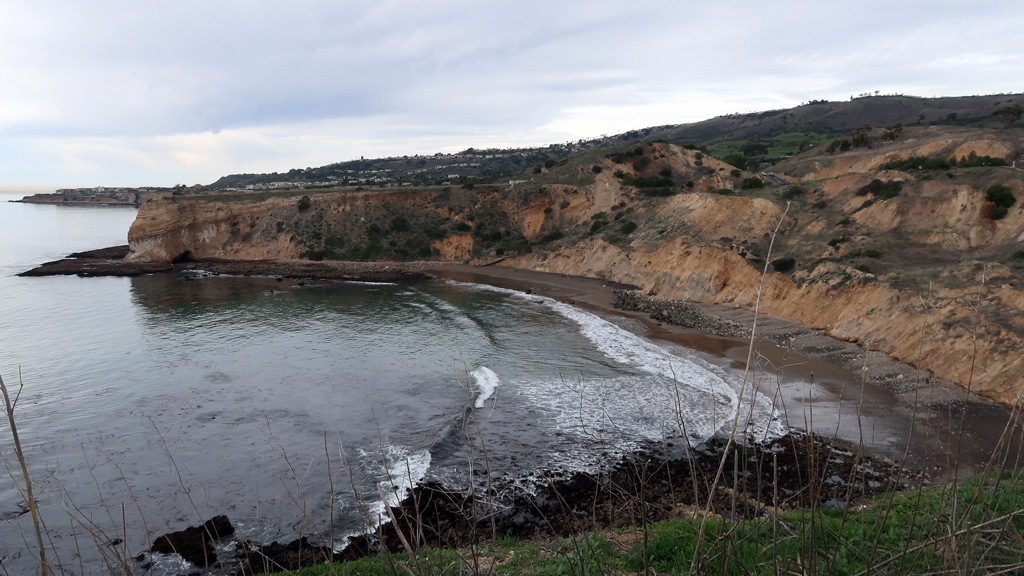 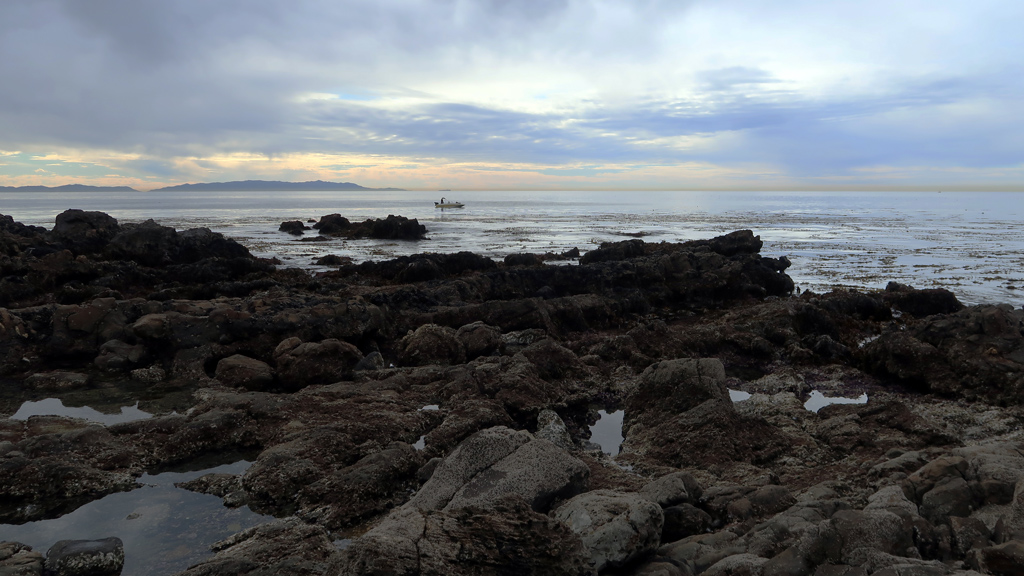 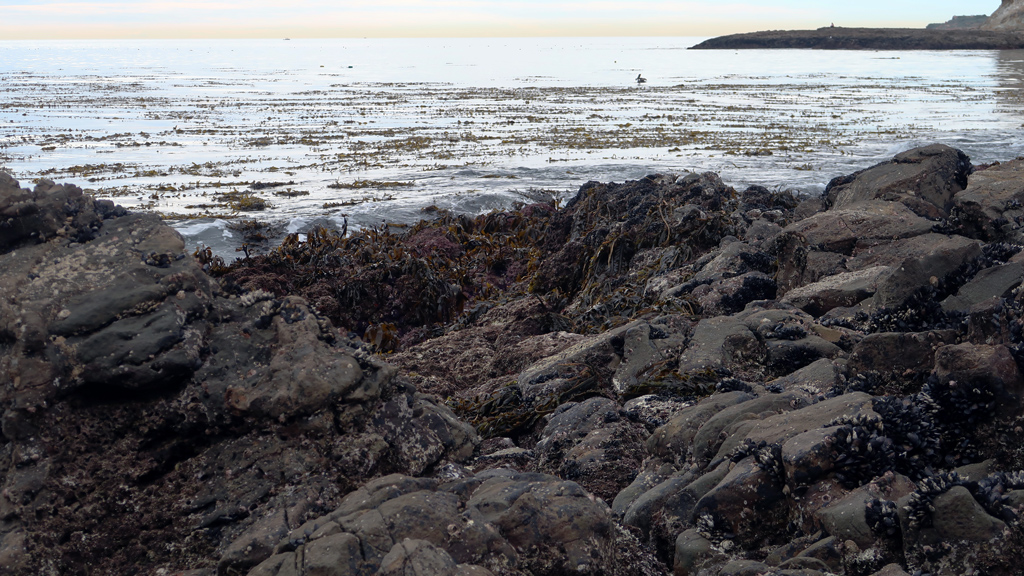 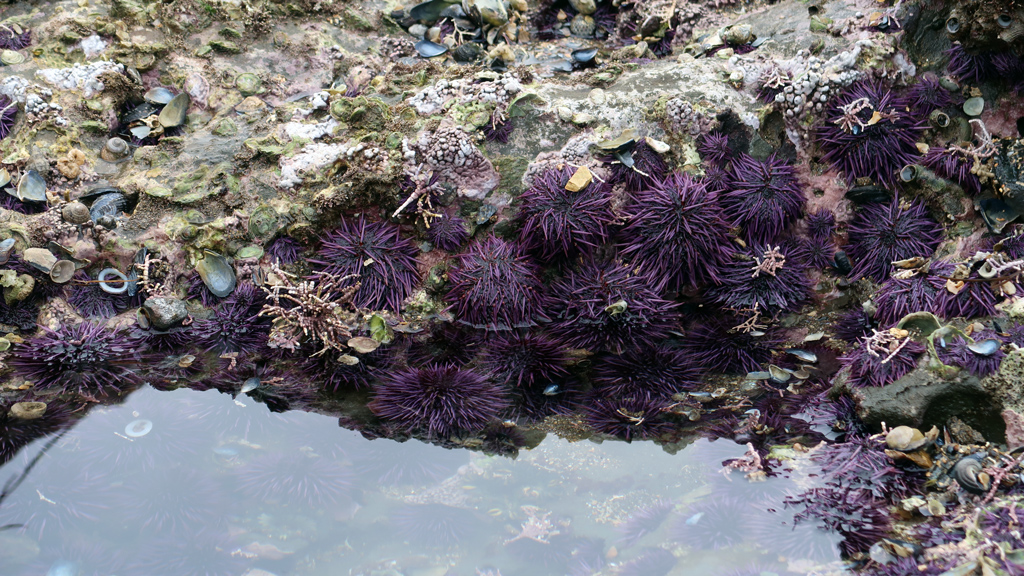