After arriving back to Atlanta upon the conclusion of my one-week trip to the West Coast, I picked up my truck, spent one more night in Atlanta to rest up, then drove to Birmingham, Alabama to continue on my road trip. For my first adventure in Birmingham, I drove to the adjacent neighborhood of Pelham to visit the Oak Mountain State Park.

I didn’t really do the best job in planning interesting activities along this path—I mainly scheduled things out with a plan to get back to Las Vegas via vehicle by early December so I can wrap up some classes for one of my continuing education certifications—so I based the remainder of my road trip on that, rather than looking at what interesting things are along the way. That ended up being unfortunate for Birmingham, because if I had known there was such a nice state park, I would’ve spent more days here.

I wanted to hike an intermediate trail and selected King’s Chair on the eastern side of the state park. The trip to the summit was fairly stereotypical for a moderate hike like this, with nice elevation gain, scattered simple obstacles, and plenty of fresh air.

Once you get to the top of the mountain, there is a relatively flatter portion along the ridge with a few pseudo-summits before hitting King’s Chair. The first, which I found out from another hiker, is called Queen’s Chair.

A little farther down was another opening, which I originally thought was King’s Chair, but later discovered that it wasn’t. There was a little platform where you could sit down, so maybe we can call it King’s Bench.

And finally, all the way at the end of the trail was King’s Chair.

I’ve touched on this a few times in the past, but people out in the “middle of nowhere” areas (and yes, I know that Birmingham technically isn’t the middle of nowhere, but I’ve historically seen everything outside of Chicago, Los Angeles, New York City, and, to some extent, Las Vegas, as the “middle of nowhere”) are much kinder and more caring. The culture in big cities is to ignore everyone around you and just do your own thing, but as I started vi­sit­ing smaller cities and exploring out into the country, I’ve had much more pleasant interactions. 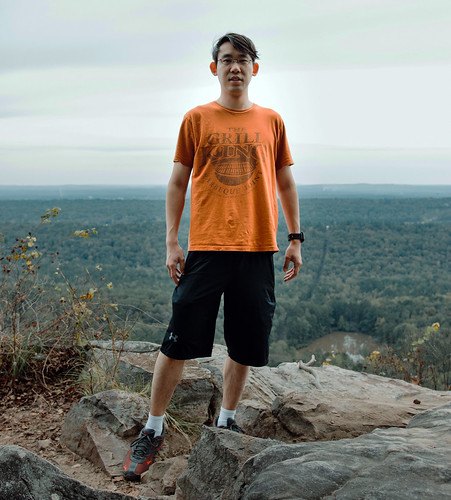 I’m not really that social of a person in general, but after I realized that it is nor­mal to interact with each other in these areas, and that I might actually be mak­ing people feel uncomfortable by having a “city attitude,” I’ve been much more receptive of social interaction and light conversation with random people I meet in public.

I’ve learned a lot about the world by taking this more open approach to others, and I think I’ve also taught a lot to others by sharing my own stories of what busy city life is like. A lot of my most interesting encounters have been the most unexpected, and I think my interaction here at the summit of King’s Chair tops the charts in unexpectedness.

I met a guy named Hunter who was hiking with his friend. Apparently Hunter used to be an aspiring professional gamer, and he was familiar with Tempo Storm and our past esports endeavors. He’s doing photography now, and offered to take a picture of me, which I obviously accepted.

The top of a mountain in the middle of Alabama is probably one of the last places I would’ve anticipated meeting an esports fan, but I’m glad that we talked for long enough to figure that out, because this experience definitely made my visit to the state much more memorable.

After parting ways with my new friends, I walked across the ridge in the opposite direction, then took a different path down to the trailhead.

Apart from the novelty of my conversation at the summit, the rest of the hike was fairly routine. Oak Mountain State Park is a decently large recreation area, and if I was staying in Birmingham for longer, I definitely would’ve come back at least a couple more times to hike a few more trails.