Last year—almost precisely one year ago, in fact—I visited Seattle during the COVID-19 pandemic with my assistant. We got a CityPASS and stopped by the Seattle Aquarium, Space Needle, Chihuly Garden and Glass, and Woodland Park Zoo. The one other thing she wanted to do, which we didn’t be­cause we ran out of time, was go dolphin and orca watching.

Now that I am back in Seattle for a week, I decided to go on a whale watching tour to make my former assistant jealous (she is my former assistant be­cause, as of a handful of months ago, she has a full-time job being an executive assistant to a CEO at a fairly large company and makes much more mon­ey than my company could afford to pay her). … I guess you could consider this plan of making her jealous to have backfired, as you will see shortly. 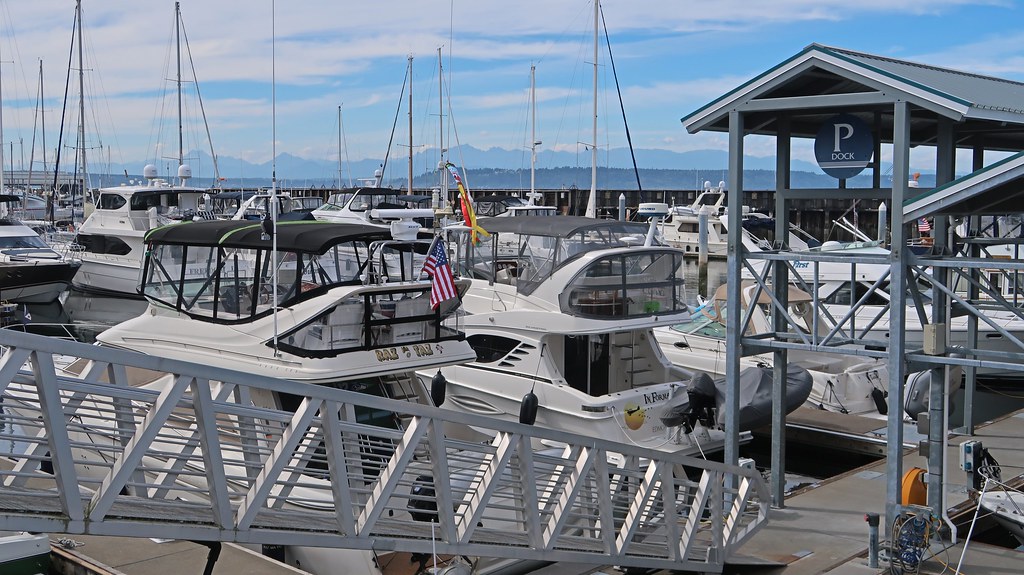 The touring service I used was Puget Sound Express. I picked this one because it is apparently a family-run business, and as you might already know, I’ve been trying my best to spend my money at small businesses and family-run operations ever since the pandemic to help them out using my COVID-19 relief funding.

Prior to departing, I walked around the ship to see the various areas of the watercraft. The door to the cockpit was open, so I snapped a photo. 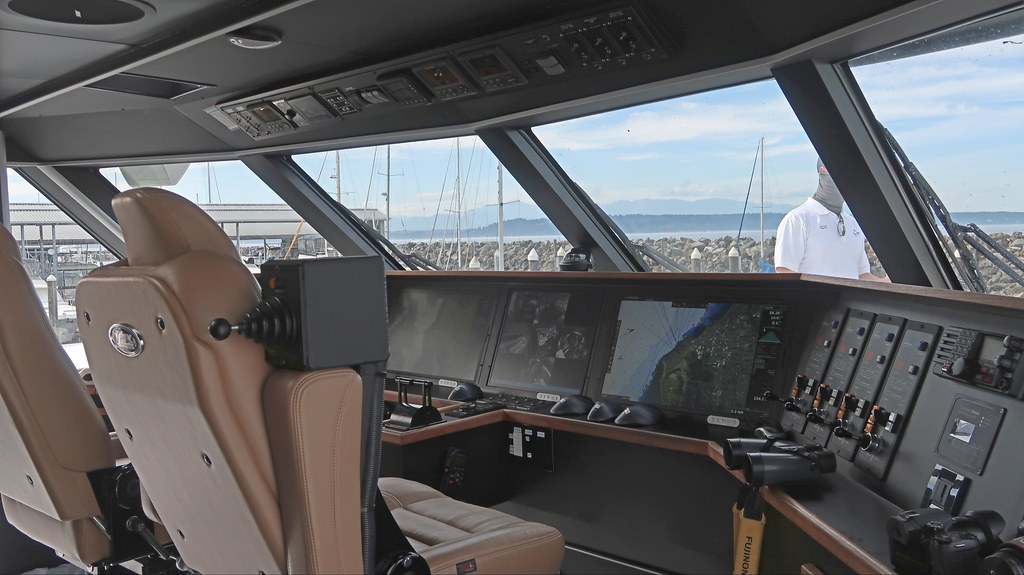 I wouldn’t really say that I’m a marine life or boating enthusiast, so I decided to book a half-day trip that lasted four hours (as opposed to an all-day or multi-day trip). I was joined by my friends Doug and Allie, and because our reservation was for a group of three, our booking came with a private table alongside the windows of the indoor pas­sen­ger area of the boat. Our trip departed from the Port of Edmonds. 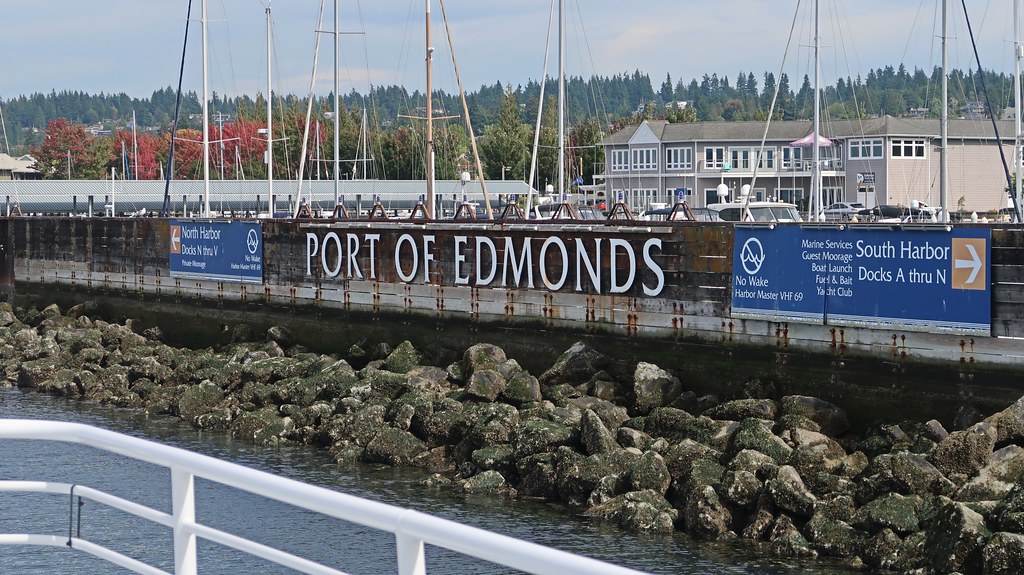 The route of the trip was to head out through Puget Sound, travel north, go into the Rosario Strait, and travel around the San Juan Islands. The first por­tion of the trip was a fairly straight shot out and away from the Seattle Metropolitan Area, with the boat maintaining speeds of 40+ MPH (~65+ KPH). Along the way, and once we got near the Islands, there was some nice scenery. 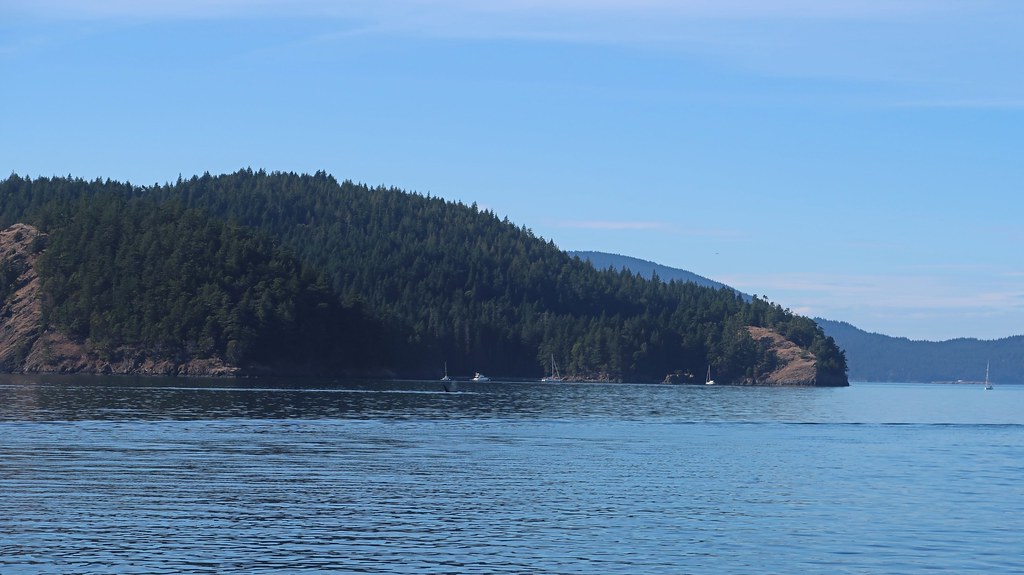 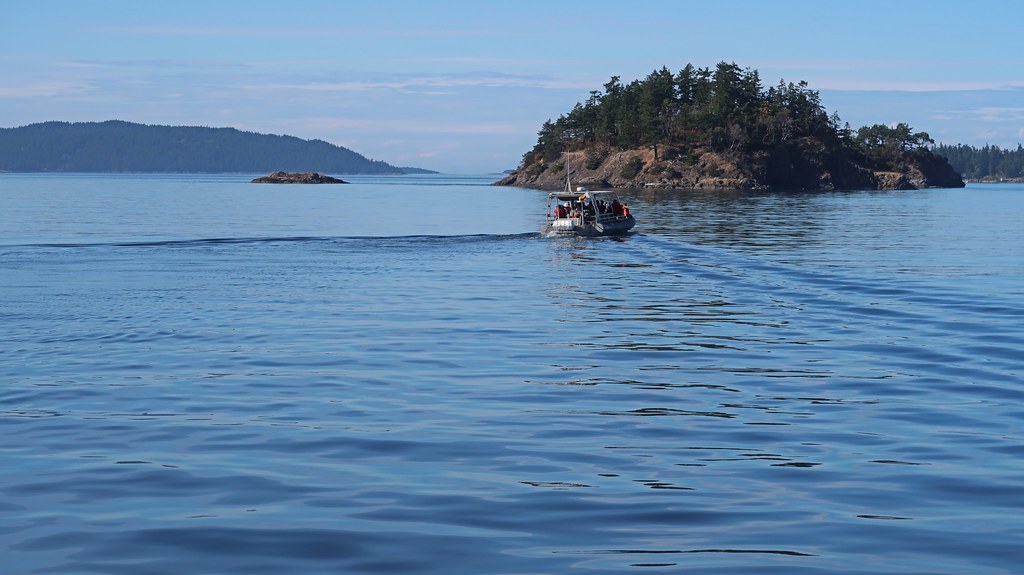 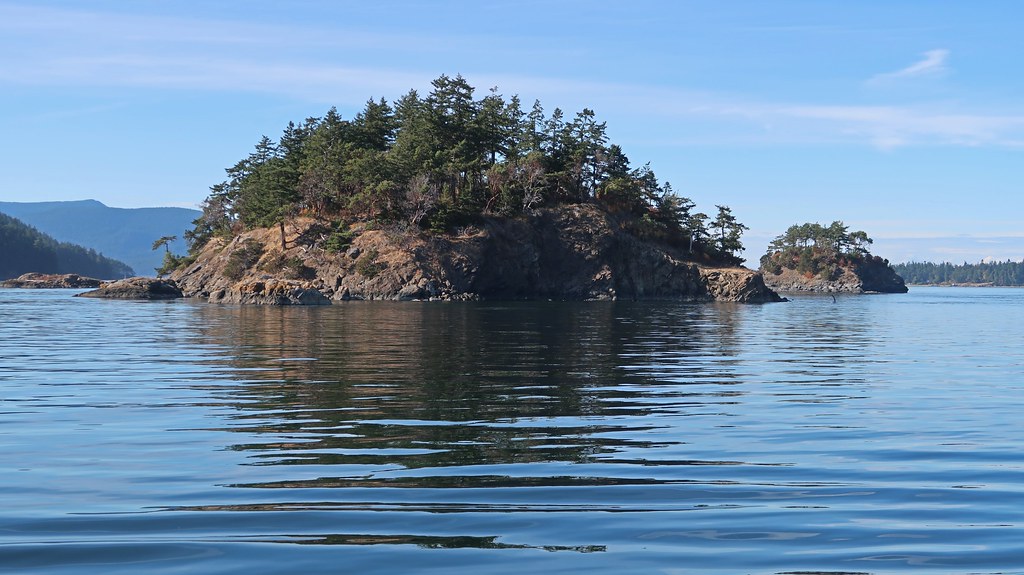 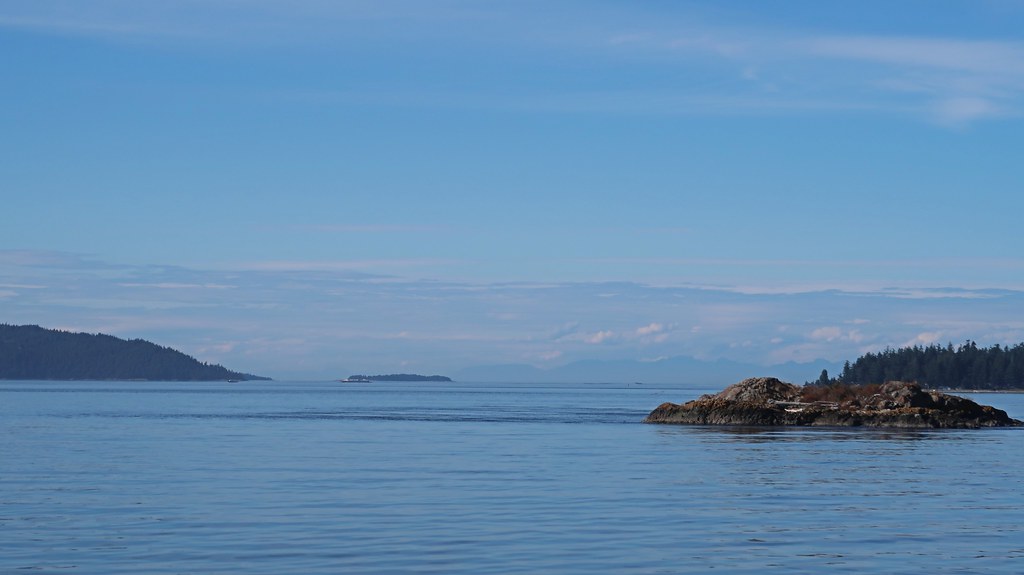 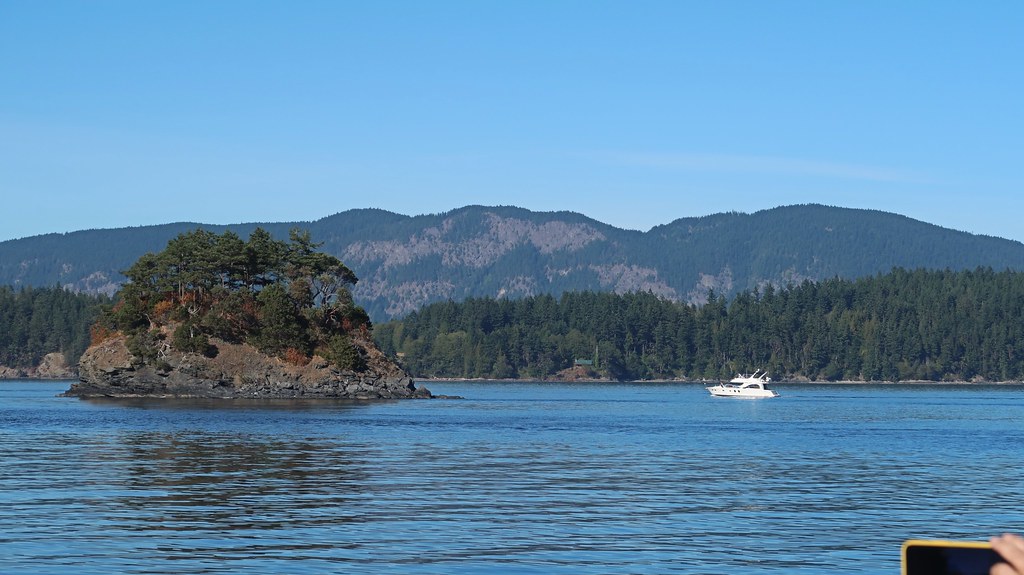 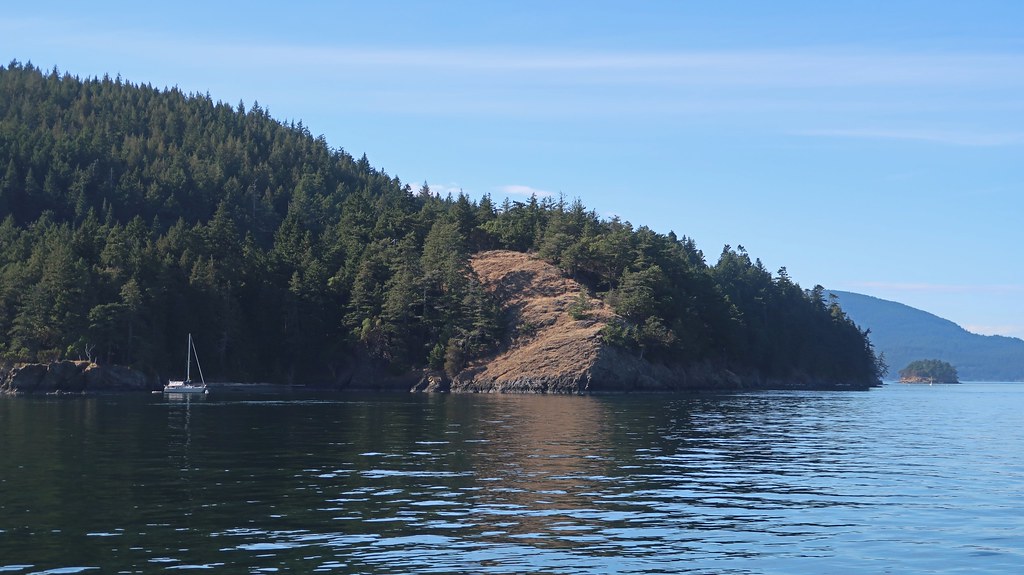 After looking at those photos, you may be wondering, “where are the whales?” … to which I would respond, “great question.”

At various points throughout our trip, the crew would make an announcement that there was a whale sighting. To be clear, my expectation going into this tour was to see sights comparable to the photos that pop up when you search online for “whale jumping out of water.” Instead, all we saw were… their fins.

The crew would be pointing out how there were killer whales in the water, and somehow even be identifying them by code names assigned to each whale, yet all we were able to see were fins pop up above the water once in a while. The crew would even be talking about how the whales just caught a seal, and how they each need to eat one seal a day in order to keep up their fat stores to survive through the winter… but still, all we saw were fins.

Here is a photograph of a fin. 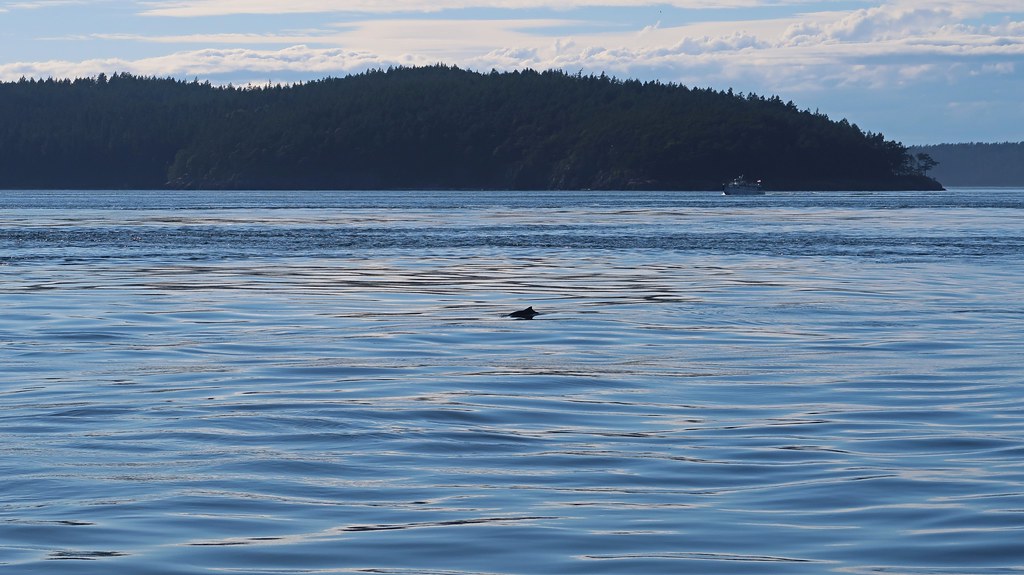 Needless to say, my disappointment was immeasurable.

So much so, in fact, that Doug told me that his favorite part of the trip was seeing how disappointed I was. The thing is, I don’t actually outwardly ex­press negative emotion; I’ll go as far as to point out objectively that seeing a few fins in the water is not what I was hoping for, but I won’t be hostile or any­thing. That made it extra funny for Doug, considering that my utter disappointment was clearly visible on my face, even though my words were try­ing to soften the situation and indicate otherwise.

I checked in with someone else who had gone on one of these tours before, and she let me know that her experience was fairly comparable to mine. Thus, I think it’s pretty obvious at this point that I absolutely do not recommend going on one of these tours. Apparently, if you’re lucky enough, you can see marine wildlife from the regular ferries that go to and from Seattle, without having to pay extra for one of these tours.

Going on a tangent, one thing I confirmed from this boat trip is that I am fairly prone to seasickness in general. I mentioned about half a year ago that I went on a boat for the first time for leisurely purposes and got savagely seasick. I thought that this whale (fin) watching ride would be better because the boat was a lot bigger, but it didn’t seem to matter much. It was definitely comparatively better than the tiny, overloaded boat I rode in before, but I still felt like I was going to vomit within half an hour.

Overall, I’m still not upset that I went. The scenery around this area was actually very nice, and it’s not something that I ever would have seen anywhere else without going out of my way to plan an aquatic event. It was also served as a pleasant trip out with friends.