It’s been a while since I’ve been to a nice, high-end restaurant, so I was looking forward to visiting Delage in downtown Oakland, California, a Japanese res­tau­rant with an omakase offering (more commonly referred to in the United States as a “tasting menu” or “chef’s choice”). Tragically, my camera bat­ter­y ran out after the first shot, so I took all the photographs with my phone instead, which is why the quality isn’t quite up to my regular standard.

Upon arrival, we were led in through an unsuspecting door that did not at all look like a restaurant; we were only able to identify it by the building num­ber of the address, as well as from the four other people who had arrived ahead of us and were also in attendance for the omakase. The interior of the restaurant was fairly small; there was enough seating at the bar area for six diners, as well as a table in the corner that could accommodate four ad­di­tion­al people.

As the amouse-bouche (sometimes referred to as “the free hors d’œuvre”), we were given crystal bread and smoked salmon with wasabi cream, edible flowers, microgreens, and a bamboo charcoal tuile, served atop four large pebbles.

The smoked salmon had the distinct, iconic, recognizable flavor that you’d expect of smoked salmon. I thought the wasabi cream would add a nice zest, but there was no spice to it at all, and overall, the flavor profile felt a bit dull—not much different than just getting regular cured salmon, but with the added crispy texture of the crystal bread. 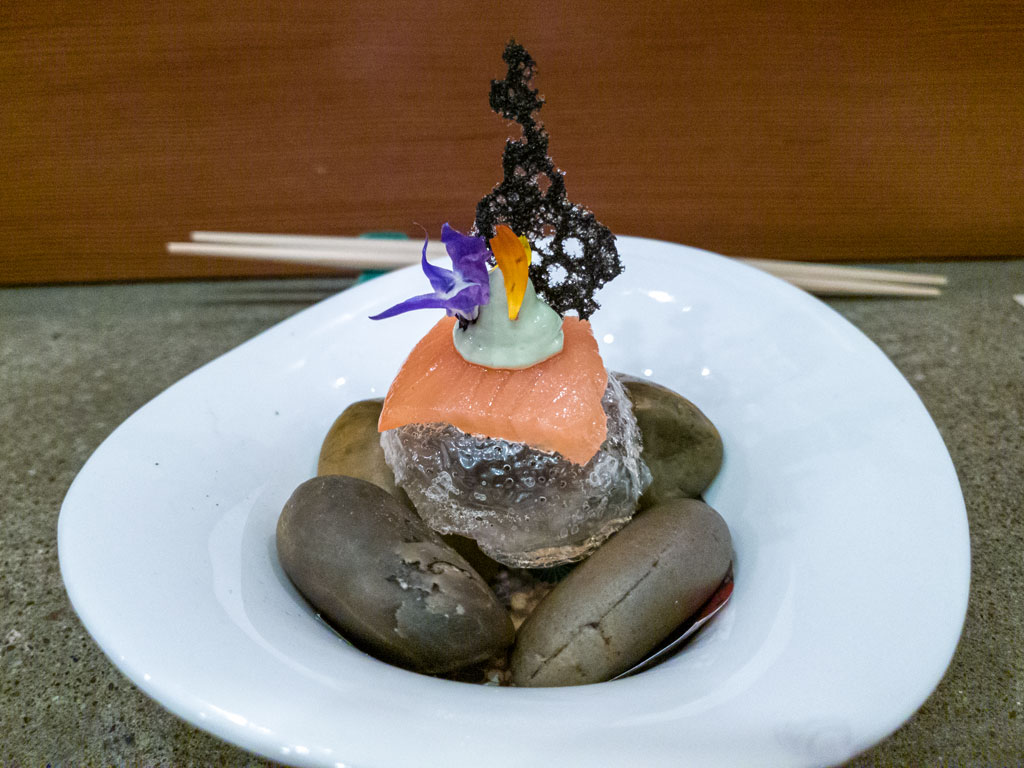 This salad was pretty disappointing.

The king salmon slices were very thin, the condition of the fish looked almost scrap-like, and the mass of the fish was about the same as what you’d ex­pect from one single slice of salmon sashimi from a regular sushi restaurant. The salmon appeared to have been cut from the flesh and not the belly, so it lacked the deep, rich, fatty flavor that you expect from high-quality salmon.

The caviar was even more under­whelm­ing, as its flavor was nearly unrecognizable through the tang of the dressing. The mixed greens weren’t actually that bad with the dressing, and it served as a pretty good appetizer, but the portion size was so small that, by the time I realized I was enjoying the veg­gies, I had already finished them. 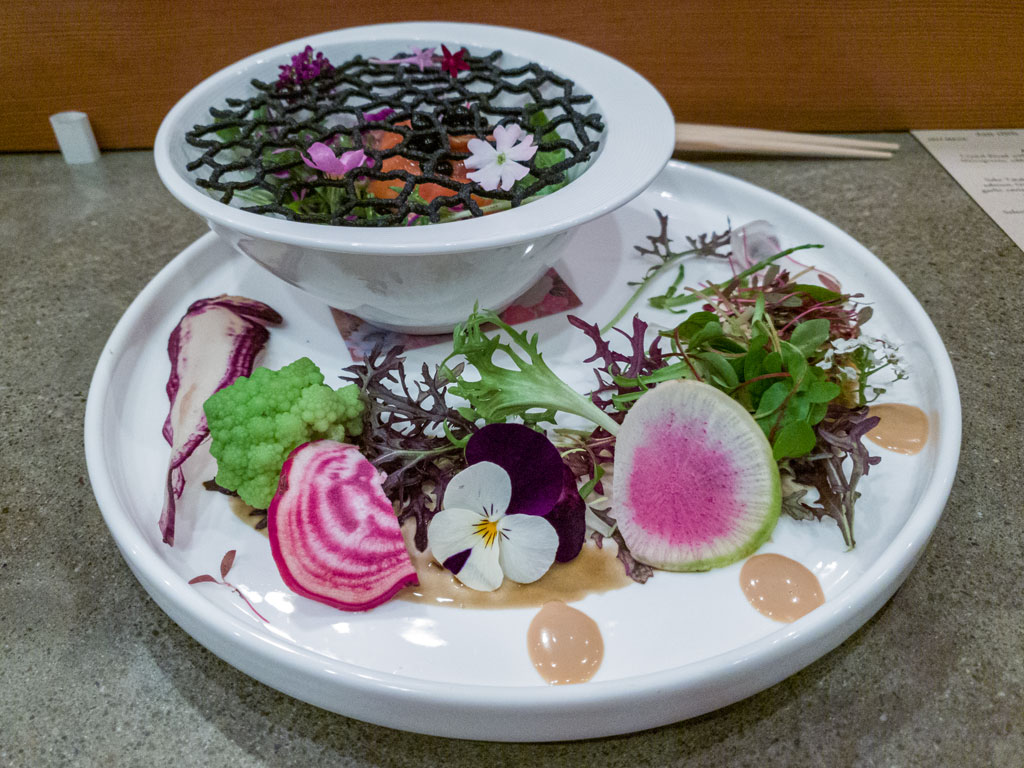 The second course was a two-piece set of sushi wrapped in bamboo leaf.

The one on the right was avocado and edible flower, which I am surprised they even considered to be worthy of being included in a pair of sushi se­lec­tions. The one on the left was unagi (freshwater eel), but it was deskinned and did not have the iconic eel sauce, so it did not actually taste much like eel.

It seemed like the bamboo-wrapped triangles were lightly steamed, but I’m not sure if that had much of an effect; I believe the bamboo was mostly there for presentation. 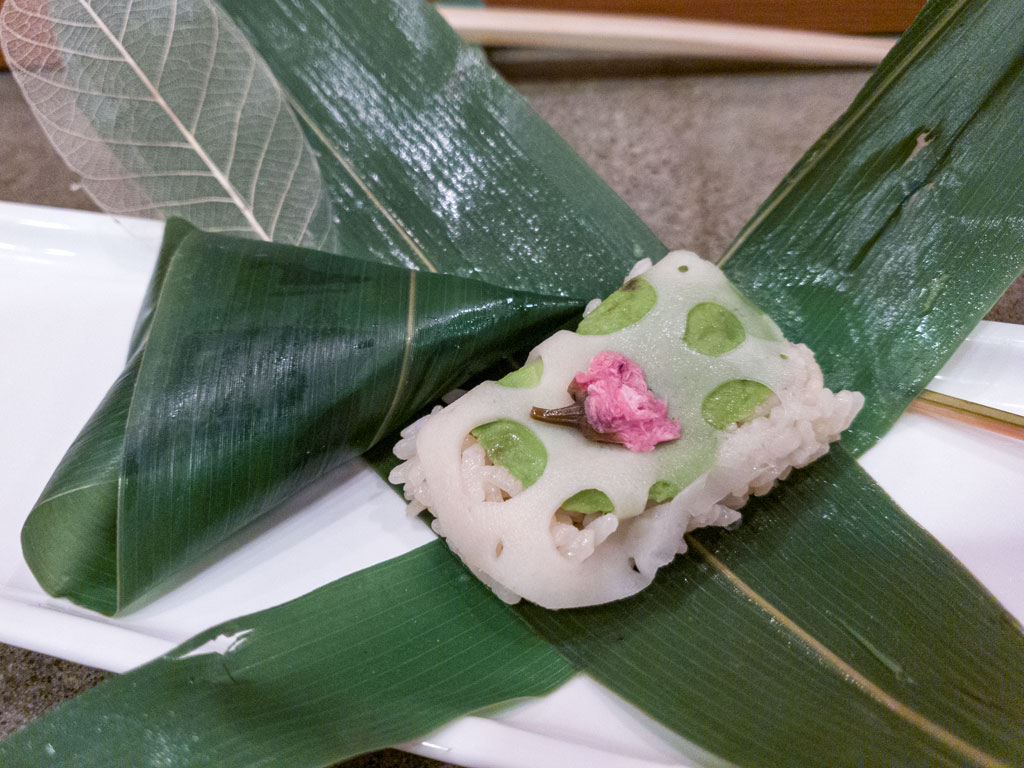 The third course was when the real sushi began—it was a chef’s selection of four pieces of nigiri sushi.

The first piece was tuna, which was fairly straightforward and tasted as expected. The second piece was white snapper, which had far too much soy sauce in the rice that overwhelmed the flavor of the fish. The third piece was barracuda, which I had never had before; it had a very distinct and strong fishy taste, which I actually liked. The fourth piece was bonito, which was also fairly as expected, but also had too much soy sauce.

I’m not a chef and don’t know much about flavor storytelling, so I might be mistaken here, but I think this set of nigiri might have flowed a bit better if the bonito was the second piece (which would bump the snapper and barracuda to third and fourth, respectively). 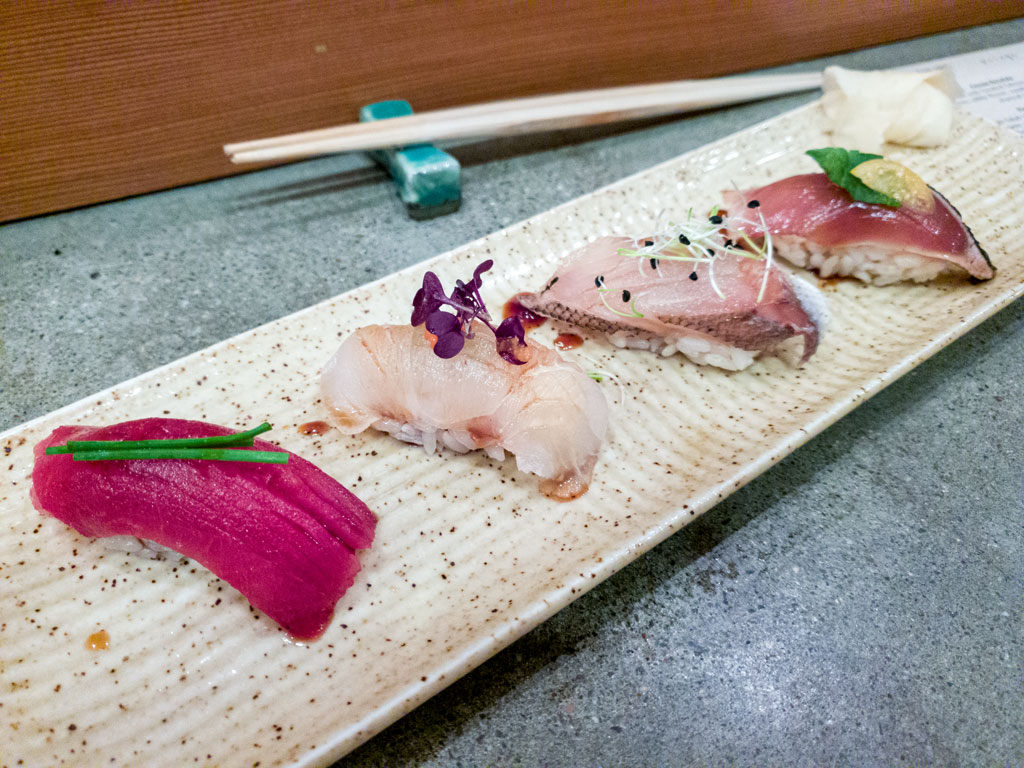 As a palate cleanser, we received a fermented beverage (I don’t remember what kind, and couldn’t tell from the taste), topped with foam and edible gold. I didn’t have a particularly strong opinion about this; it definitely wasn’t something I’m used to drinking, but it wasn’t bad. The gold flakes didn’t seem to accomplish much more than just sticking to my upper lip. 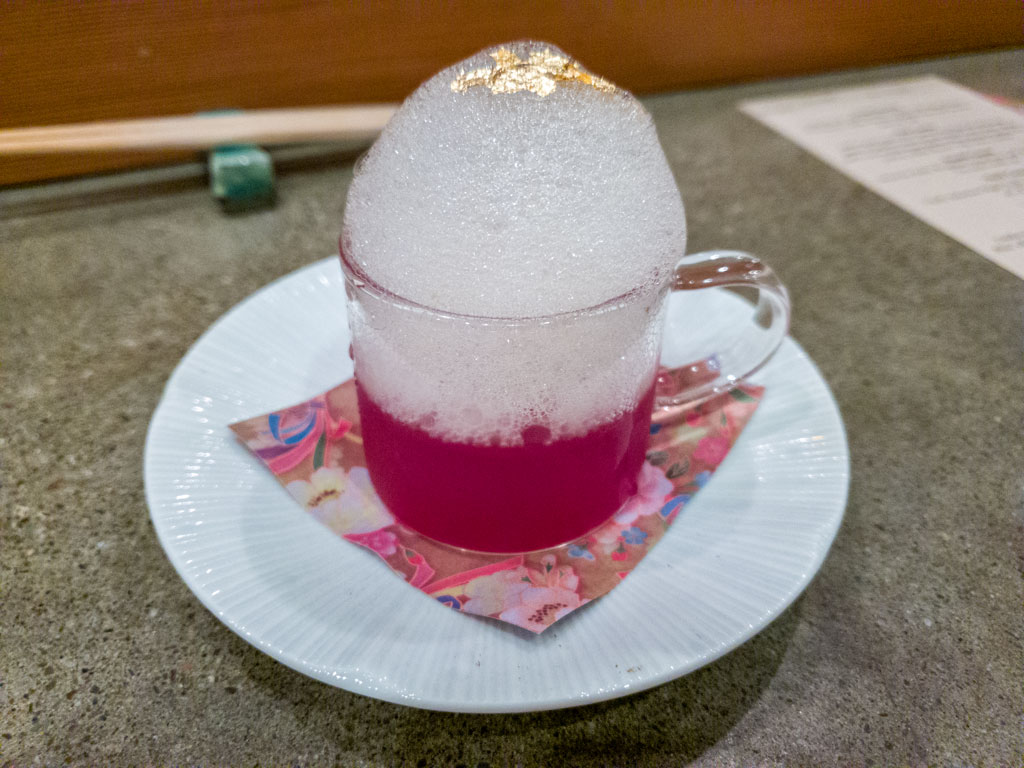 For the fourth course, we transitioned into a fried dish—wild Alaskan black cod katsu, topped with microgreen onions and chili strings, bathing in a miso white sauce with accents of shiso oil, chili oil, and katsu sauce.

This was a nice dish, and I understood why they decided to slot in a palette cleanser right before the katsu. It was slightly too fried for my personal pref­er­ence, but it was still within a reasonable range of crispiness on the outside. The cod on the inside was soft and juicy, and the sauce supplemented the flavor of the fish well.

I couldn’t really taste the oils and katsu sauce anointed in the miso, but at least they were nice to look at and added some extra col­or. 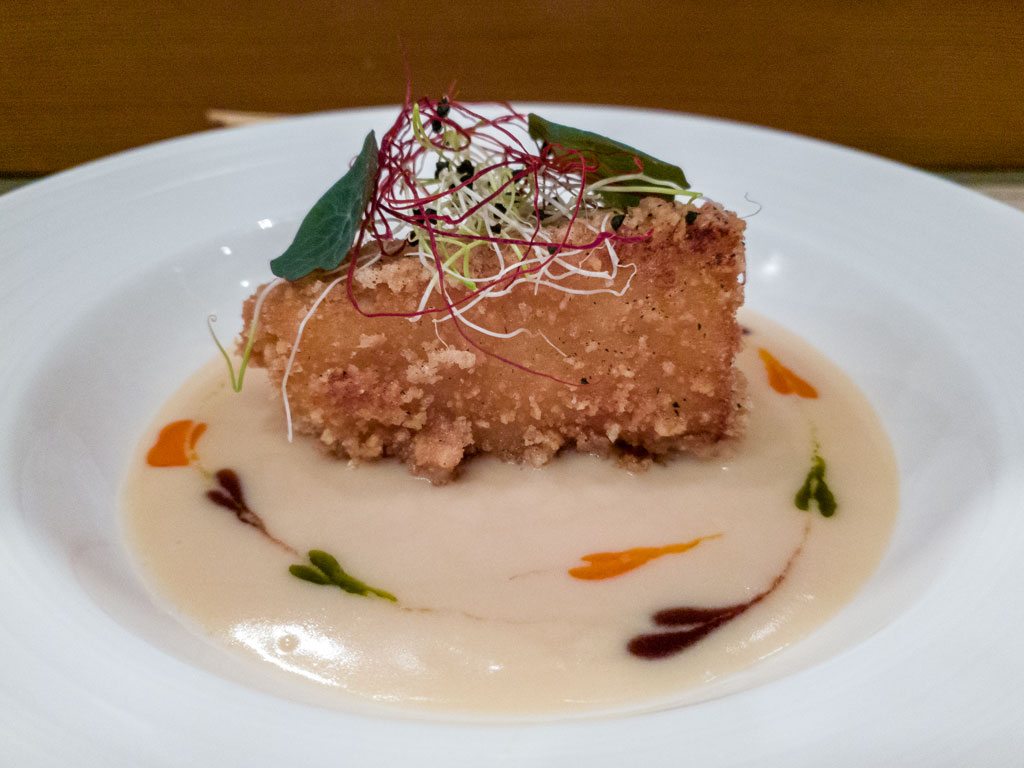 Next up was my favorite dish of the night. We got a mini chirashi combination, one that focused on roe and sea grapes, and another that had salmon roe and sea urchin.

The bowl with the smaller roe and sea grapes had a very satisfying texture to them, and it was very fun to bite down and have many small orbs pop in your mouth. The bowl with the sea urchin and its deep, umami flavor was well-complemented by the stronger flavor of the salmon roe. 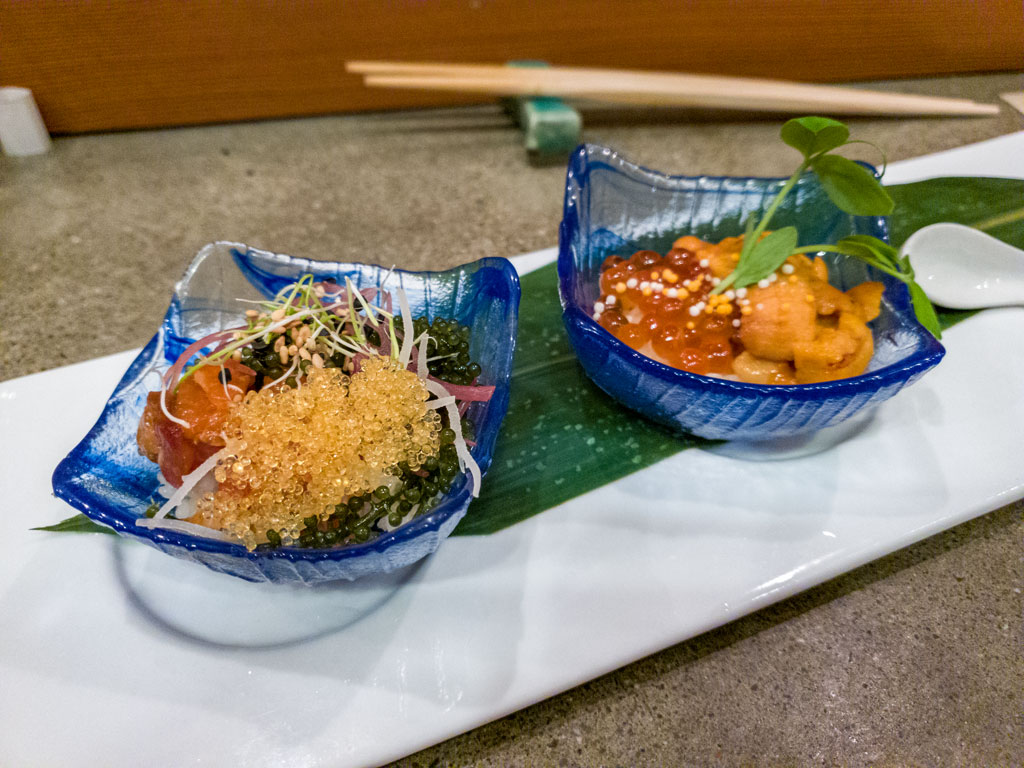 For the sixth course, we had another plate of four pieces of nigiri—this time it was toro (tuna belly), red snapper, sea bream, and sea bass.

I think this might have been my first time trying sea bream… or, if it wasn’t, it probably wasn’t very memorable, because it did not have a very distinct flavor. Unfortunately, what made it even worse was that the sea bream (as well as just all the nigiri pieces served in general) had too much soy sauce, so it “salted out” a lot of the flavor of the fish. 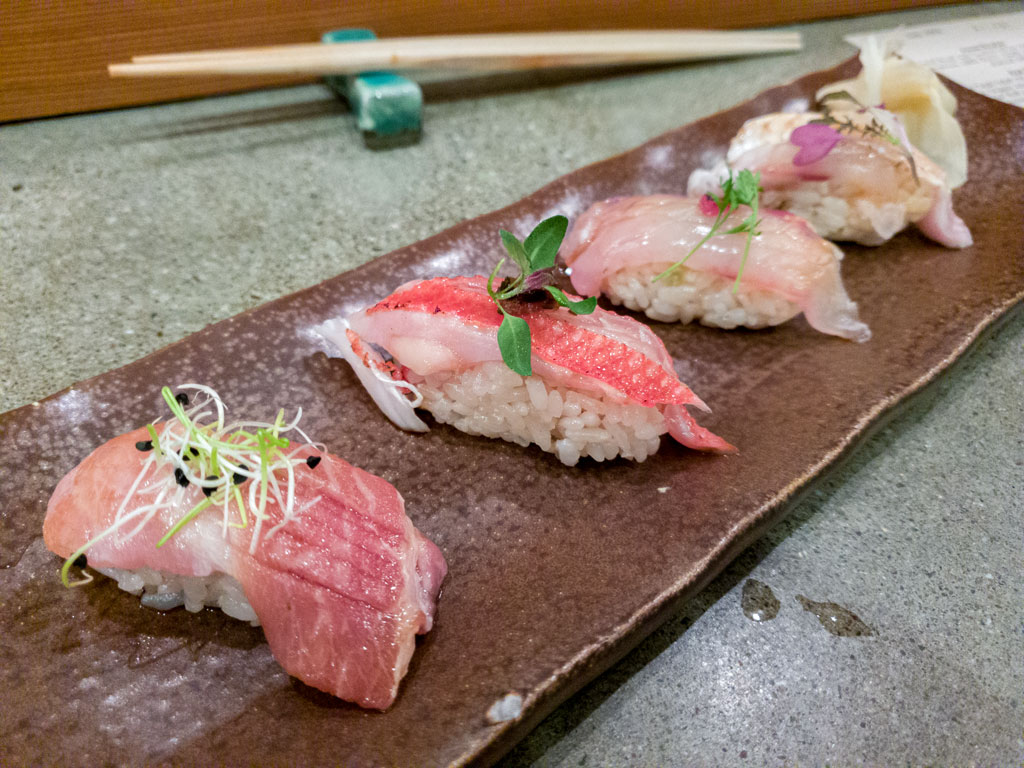 The seventh course was hiyokomame miso espuma soup, made from chickpea miso and mushrooms, sprinkled with shichimi pepper and topped with rice cracker bits and microgreens.

For heart health reasons, I’ve been avoiding thick and creamy foods lately that are high in saturated fat, so this soup tasted extra thick and creamy to me, simply because I wasn’t used to the texture anymore. However, I still thought it was great—it had a deep, rich flavor, and the rice cracker bits added a re­freshing crunch and pop to each spoonful of soup. 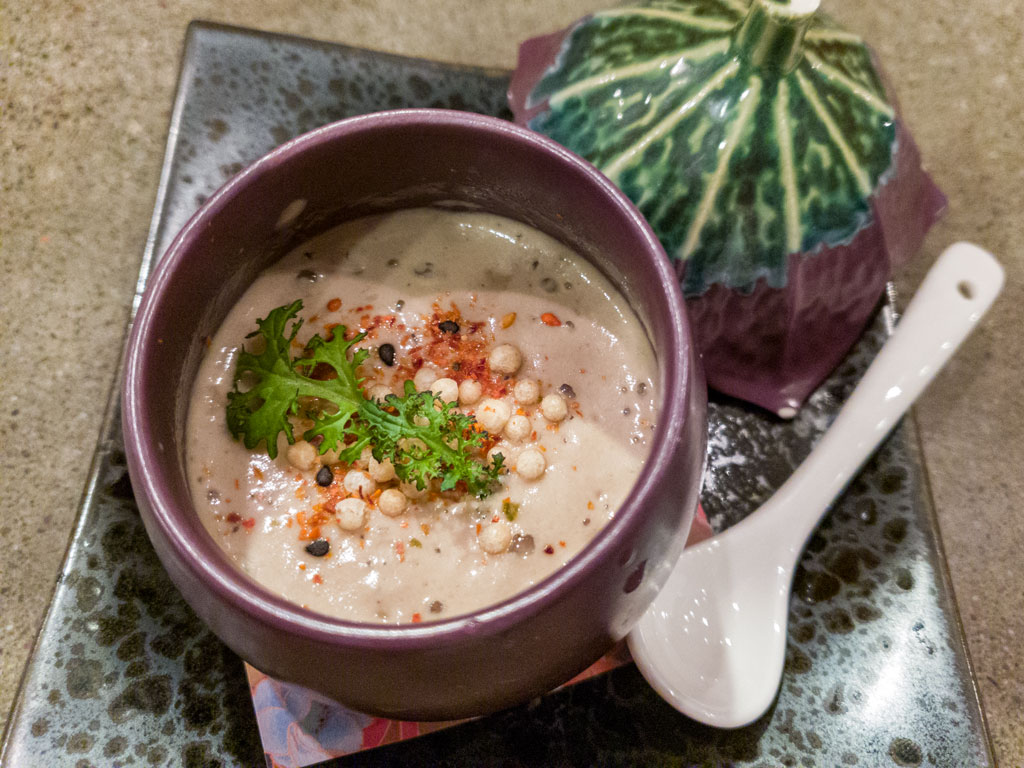 For dessert, as the eighth course, we were served amazake pudding. Amazake is a non-alcoholic fermented Japanese rice drink, rich in enzymes and pro­bi­ot­ics. The pudding was made with dairy-free cream, had assorted fruit glazed with kuromitsu, and was adorned with a pomegranate tuile.

The lack of attention to detail on the tuile was a bit disappointing to me, considering that this was supposed to be a high-end Japanese restaurant. As you can tell from the photograph, there were “stringy” parts of the tuile that were not removed to form a clean butterfly shape. That obviously doesn’t make a difference in taste or functionality, but isn’t the best sign for omakase.

Otherwise, the pudding itself was good. It wasn’t anything crazy or innovative, but the flavor was clean, the fruit was fresh, and the tuile added a nice crunch to the texture. 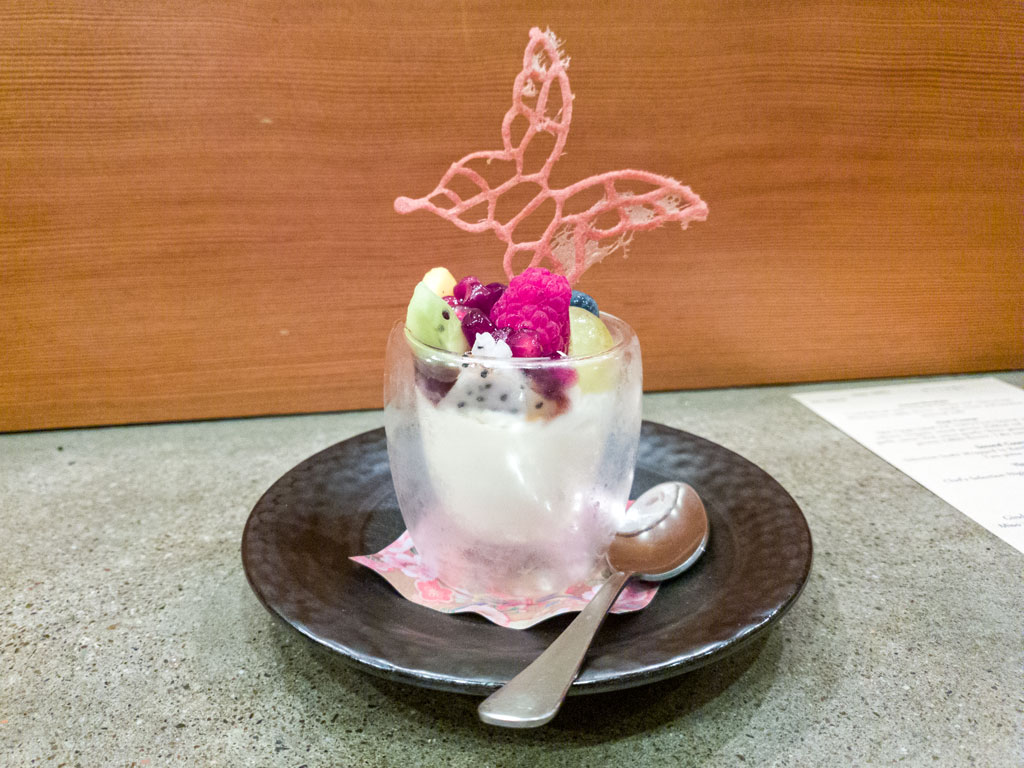 One different thing about this restaurant is that diners were required to pre-pay for the omakase prior to being served. This was done by scanning a QR code and processing a credit card payment on their website. I imagine this policy was implemented after they had issues with non-payment post-meal.

It’s difficult to determine how much gratuity to give for the service prior to being served at all, but I didn’t bring any cash to be able to tip the servers af­ter the meal was over. Additionally, I didn’t want an absence of gratuity on the pre-payment to negatively affect our quality of food or service. Thus, I just selected the minimum percentage gratuity amount on the payment interface, without having to manually edit and type in a custom amount.

Here is a breakdown of what my friend and I paid:

Bookings were available to begin at 5:30 PM and 8:00 PM and lasted two hours each. We selected the 5:30 PM time slot because neither of us particularly enjoy being out too late. Street parking in Oakland is $2 per hour but free after 6:00 PM, so we only ended up having to pay for half an hour’s worth.

Overall, I thought that this omakase experience was pretty underwhelming. At this price point, you generally expect to have an in­credible time. It def­i­nite­ly wasn’t bad, and I would have been pretty happy if I had paid about half of what I did, but at US$125.00 per person before taxes, fees, and gra­tu­ity, I think it’s a bit too pricey relative to the value you get.

Another big element of the omakase experience is that you are able to see your food being prepared by the chef and get an opportunity to have an in­ter­ac­tive experience. That was only loosely present at this restaurant; the chef was assembling the nigiri at the bar area in front of me, but she gave off the im­pression of being more of a regular cook, as opposed to a prestigious chef.

I have another omakase reservation coming up shortly, and I’m hoping that it’s better than this one. If money is not a problem for you, then you may con­sid­er going to this one anyway, but if you’d like to maximize value per dollar, I’m guessing that there are likely some other options in the San Fran­cis­co Bay Area that will offer a better experience.