Back during my esports and influencer marketing years, I would go to events and conventions pretty much once every month or two. However, since the pandemic, as well as since Tempo‘s pivot of its primary business focus into game design, I haven’t gone to any conventions.

I had an opportunity to attend PAX West last year with some friends, but I heard that a lot of companies were withdrawing from attendance due to con­tinuing surges of mutations of the coronavirus, so I decided not to go and instead just continued on my road trip. When the opportunity to attend PAX West arose again this year, I figured that, considering I was already in the Seattle Metropolitan Area, I would give it a shot and go to my first con­ven­tion since PAX East 2020, days before the COVID-19 outbreak and quarantines across the United States. 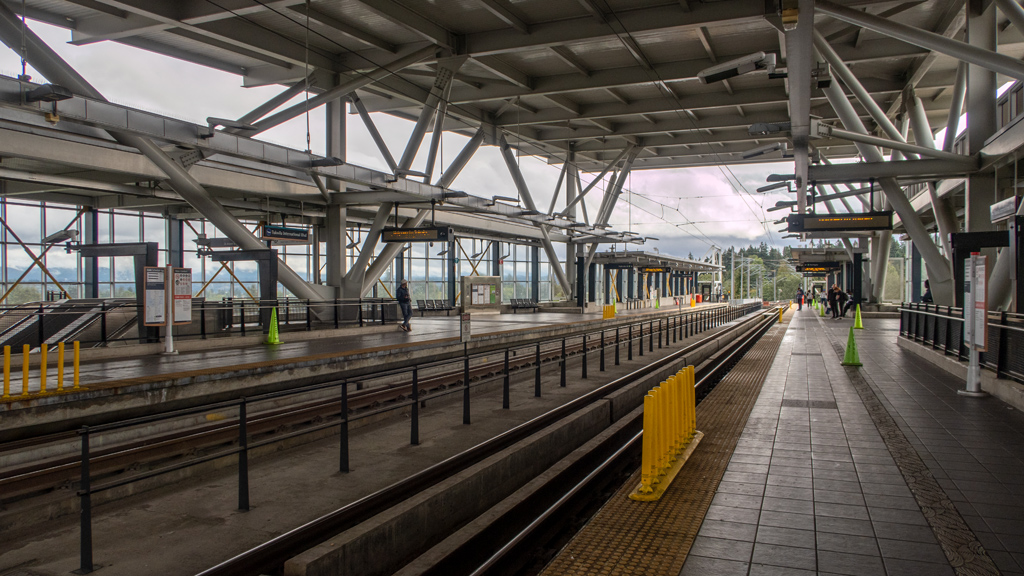 Once we got to downtown Seattle, we first headed to the Seattle Convention Center for the main exhibit halls. This was one of the very few conventions I’ve been to where I was just a tourist and not working as an exhibitor, so I was able to roam around freely and explore. Unfortunately, I didn’t really find PAX to really be that exciting. It was congested with visitors, and every single booth had a very long line waiting to participate in whatever game or activity they had.

I’m thinking it might be because I’ve just been slowly losing interest in video games over the past handful of years, considering that I’ve been finding a lot of museums across the country to be very interesting, and museums are sort of like extremely small and static conventions. Regardless, the PAX ex­hib­it hall just ended up being a lot of walking and squeezing past people, looking at video games that I could be trying but couldn’t because there were al­read­y 10 people playing and another 20 waiting for their turn. 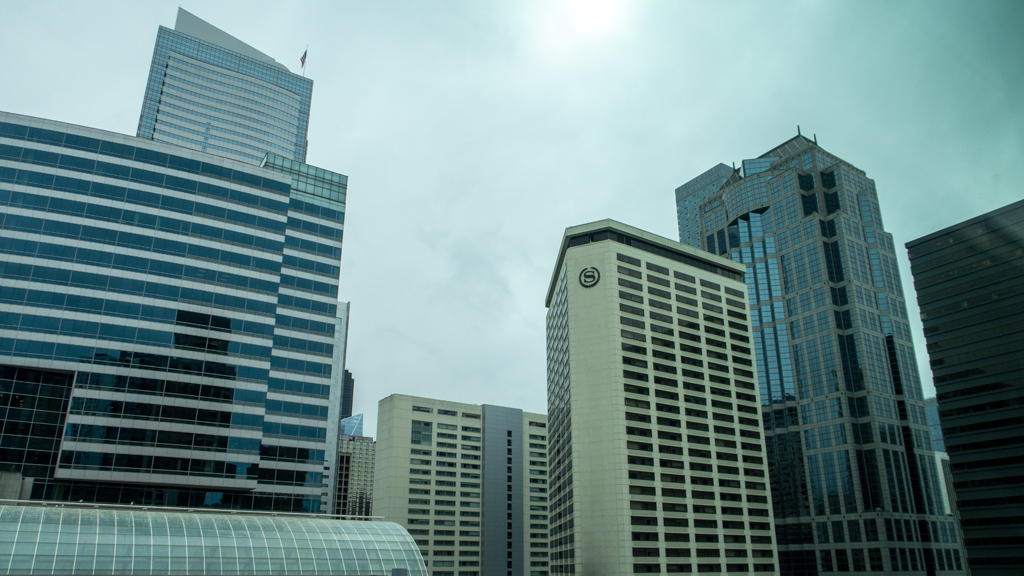 The convention was too large to fit in just the Seattle Convention Center, so they partnered with some of the neighboring hotels, including the Sheraton Grand Seattle. Pretty much the one and only main reason why I decided to attend PAX for a day is to watch some of my friends run a panel, which we used as an opportunity to also hold a larger meet-and-greet session.

Doug and I got first-row seats to watch the panel, but before it even began, we had people coming up to meet us and asking us to sign things. Here is a photo of Doug signing a “contract” that was partially generated by an AI scriptwriter that integrated a lot of inside jokes and memes from Doug’s Twitch stream and his community (I also signed it right after he did). 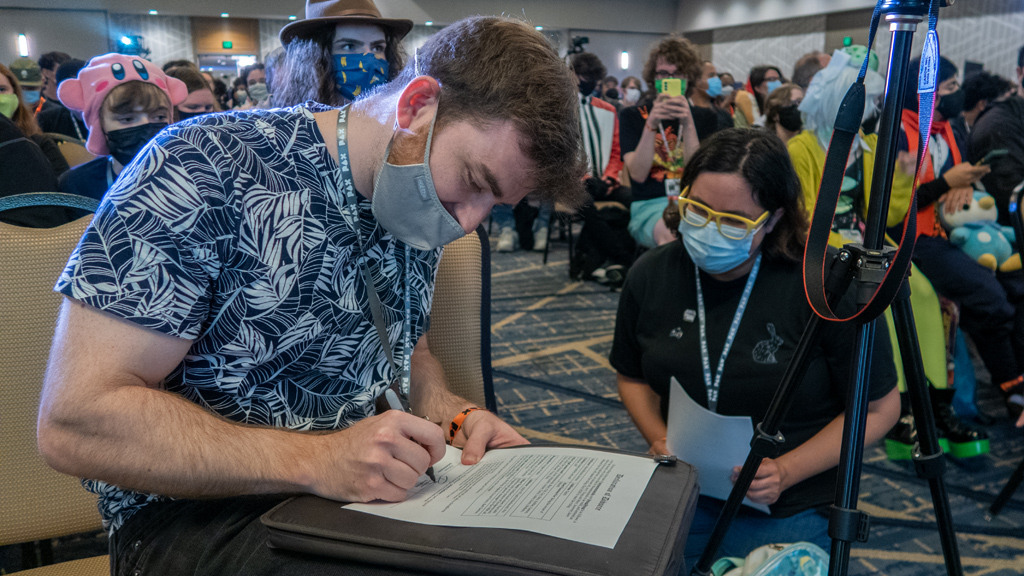 The panel that we watched was called “Fight Mii,” hosted by YouTubers from the channels Failboat and JayMoji. 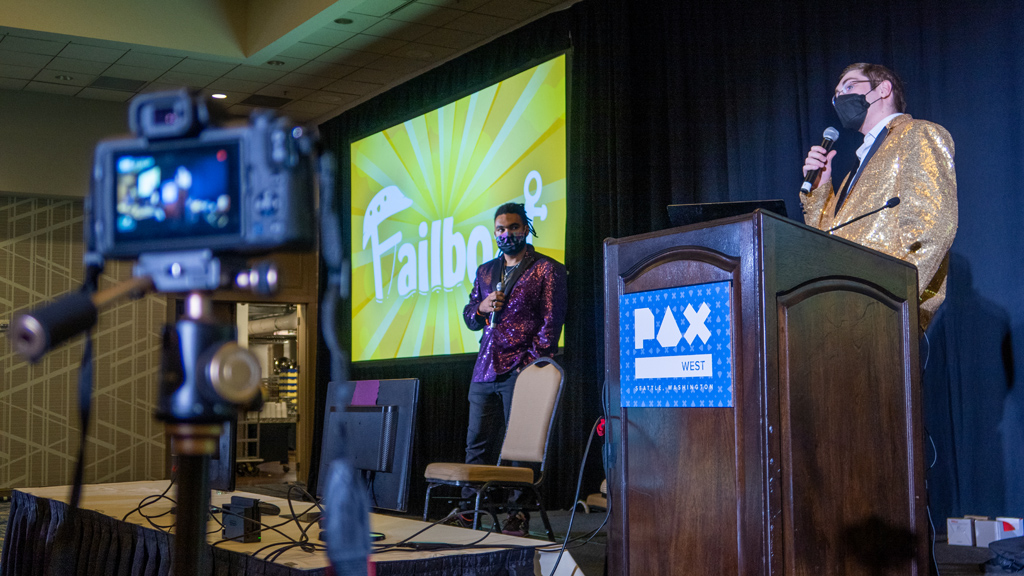 The premise of the panel was for Jay to go into the audience and select two contestants to build a Mii (which, if you’re not familiar, is basically like a cus­tom 3D avatar) within five minutes based on prompts given to them by the hosts. 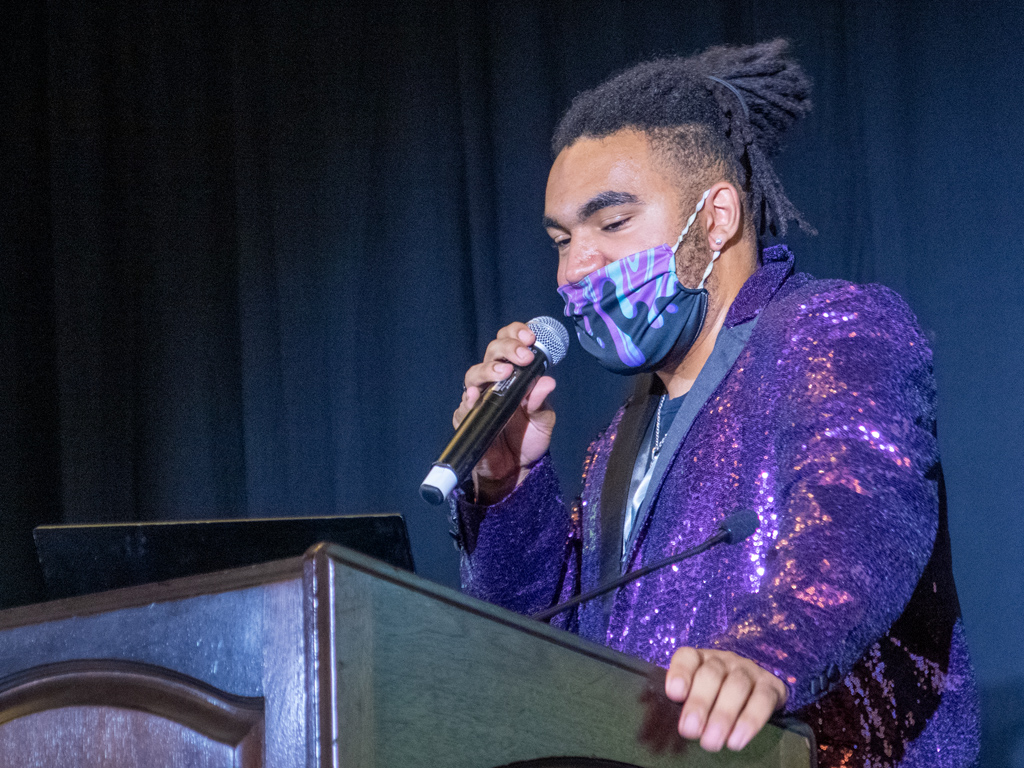 The room wasn’t completely full, but it was still one of the biggest crowds that I had seen from a PAX panel. Here’s a shot of audience members eagerly vol­un­teer­ing to compete in the Mii-building contest. 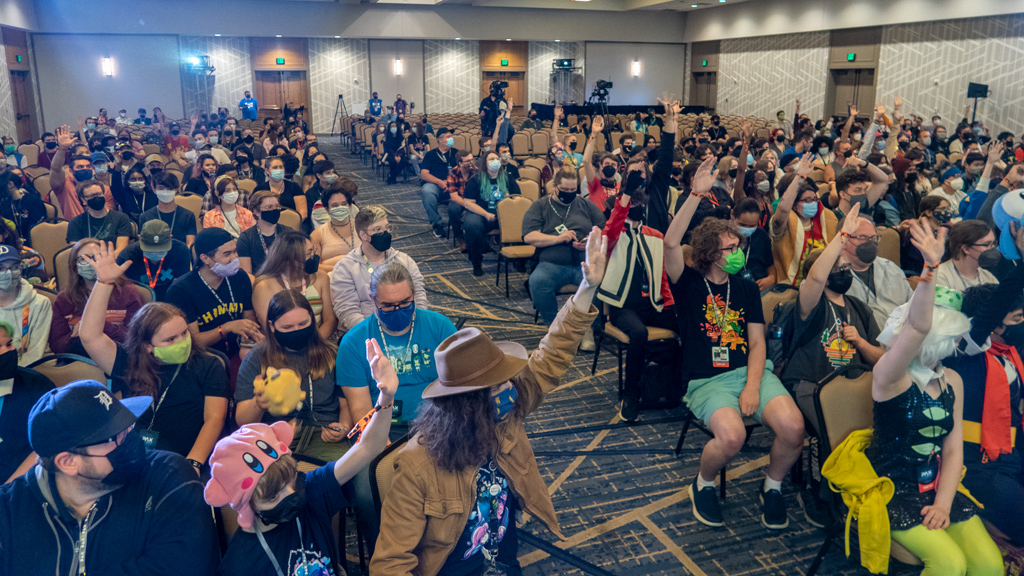 I thought the panel was great, and the hosts did a great job adding clever twists and turns to keep things exciting and comedic. For example, one of the prompts was to build a Mii that resembles Sonic the Hedgehog, but instead of just announcing it, Dan took off his gold jacket and ripped open his white button-up shirt to reveal a Sonic t-shirt underneath.

This particular prompt had a very interesting result—one contestant properly made a Mii of Sonic the Hedgehog, but one of them must have missed the “the Hedgehog” part, because instead, they built a hamburger from Sonic Drive-In… 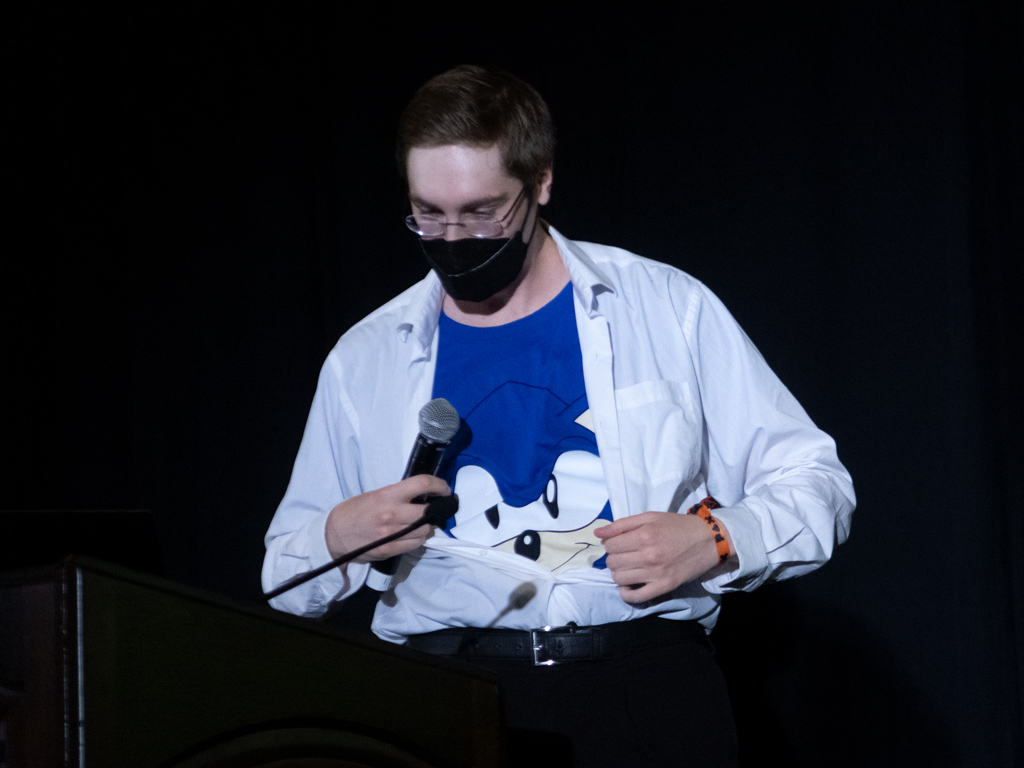 Another hilarious thing they did was give out completely pointless and impractical prizes. This one was my favorite—a literal air-circulating box fan. I bet whomever won that had a great time trying to take it on their flight to bring it back home. 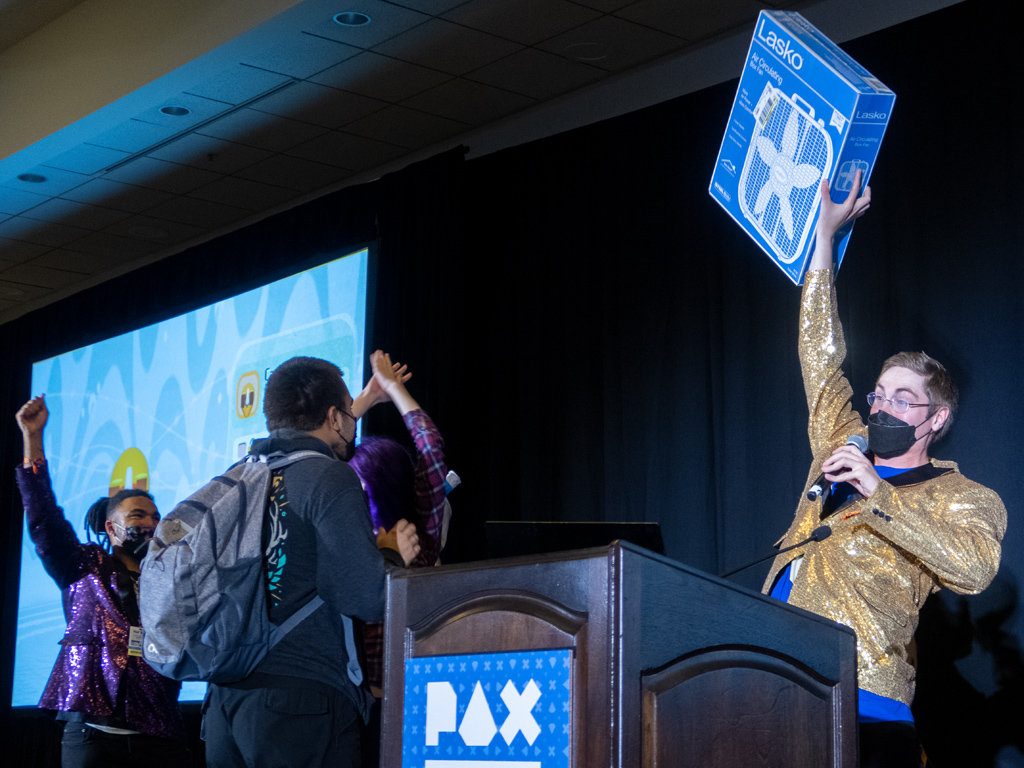 After the panel was over, we held a meet-and-greet in a nearby conference room—Dan and Jay had one line on one side of the room, while Doug and I had a line on the other side.

People brought some very interesting things for me to sign, such as a broken blender, toy drill, miniature rubber chicken, catnip mouse, issue of National Geographic magazine, and computer science homework. One person mentioned that they tried to bring in a shovel for me to sign, but it had gotten con­fiscated by security because it was a metal shovel and could be used as a weapon.

However, my favorite thing that I signed, simply due to the sheer absurdity of it, was a mold of somebody’s teeth. 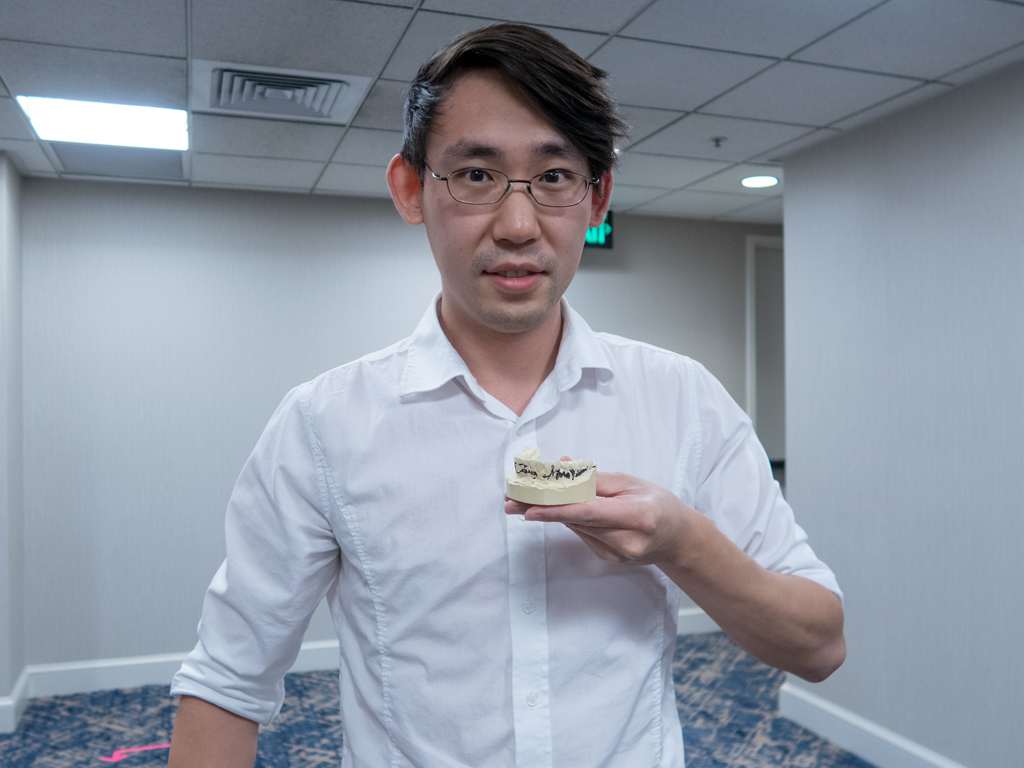 After a successful day at the convention, we stopped by The Cheesecake Factory, where I ate the driest and most shriveled chicken I had ever tasted in my entire life. 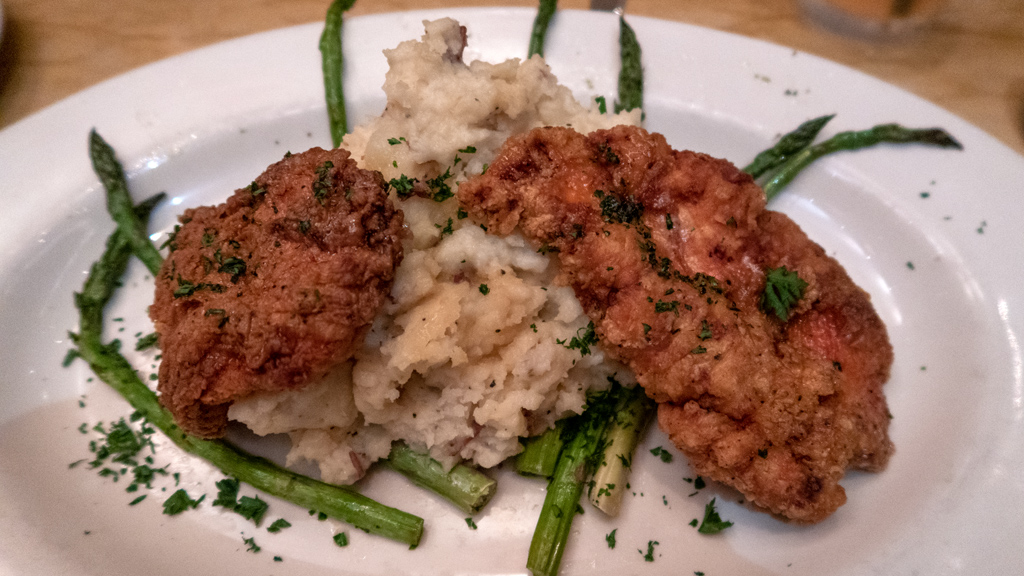 After dinner, we started making our way back to the train station to head back to Doug’s house.

I looked up the Westlake light rail station on Google Maps and led the way. Unfortunately, I led us straight to the coordinates on Google Maps, which were underground… and I couldn’t remember where the entrance was. Doug really didn’t want to miss the next train and have to wait an additional 15 or so minutes for the next one, so we started running around trying to find the entrance to the underground.

We eventually found the entrance right near the infamously dangerous McDonald’s at the corner of 3rd Avenue and Pine Street, and we made it to the light rail stop with a few minutes to spare. My stomach was very unhappy with the fact that we ran, considering that I had just eaten a bunch of really dry chicken, then consequently drank a lot of strawberry lemonade and water to make the chicken easier to swallow.

We got on the light rail, and I continued having an upset stomach, but I just kept my mind off the stomach pain and tried to take a nap (which was pret­ty much impossible, because I am always conscious of how, on public transportation, dangerous situations in a confined space can unexpectedly e­rupt without warning, so I always impulsively keep my head on a swivel). However, once we got about halfway to our destination stop, there was an an­nounce­ment that said that it was the final stop and everyone had to exit the train.

Apparently, there had been an emergency on the train tracks, so they froze train transport beyond a certain point and replaced light rail service with bus shuttle service. This was not ideal, as my stomach had gone from upset to infuriated, and now we had to go find the bus stop and basically take a layover.

After several minutes, the bus arrived, but it was obviously nowhere near as large as the train, so we all sardined on board, probably exceeded the ca­pac­i­ty of the bus, and made our way to our final destination.

… That is, the final destination for the public transportation portion of the trip. After we got to the station, we got into Doug’s car, which we had parked in the commuter lot, and drove the rest of the way back to his house.

We took public transportation because we didn’t want to bother finding parking in downtown Seattle, but it seems like the hassle of finding parking would’ve been worth it—a drive that would’ve only taken a little over 20 minutes in a personal vehicle took almost 2 hours on public transportation due to the obstacles faced throughout the whole process.

We finally got back to Doug’s house at almost 2 AM.

Needless to say, my sleep schedule is broken again.