After my stop in Cheyenne, Wyoming, my next destination was planned to be Rapid City, South Dakota. The drive is around four and a half hours, which isn’t that bad—that’s about the time it would take me to drive from Las Vegas to Los Angeles if there was normal traffic conditions after entering the Los Angeles area—but I still wanted to see if there were any opportunities to split up that drive across two days.

Upon searching for available hotels along the route, I noticed that there was a Fairfield Inn and Suites by Marriott in Scottsbluff, Nebraska. Upon closer inspection, I realized that the Scotts Bluff National Monument was also nearby west of Gering, a city in Scotts Bluff County. I decided to spend one night in Scottsbluff, then scheduled a stop at the Scotts Bluff National Monument on the day I drive in, and another stop at another nearby national park on the day I drive out.

Just as a quick disclaimer, I want to point out that I am not making any typos when it comes to these location names. The national monument and the county are called Scotts Bluff with a space between the two syllables, while the city name is Scottsbluff as a single word. Funny enough, Google Maps also has a point where, driving from the national monument to the city, you would take Old Oregon Trail, turn onto Nebraska Highway 92, and follow signs for “Scottebluff” … but I think that might just be an error on Google Maps, as I wasn’t able to locate any signs that replace Scottsbluff’s “s” with an “e.” 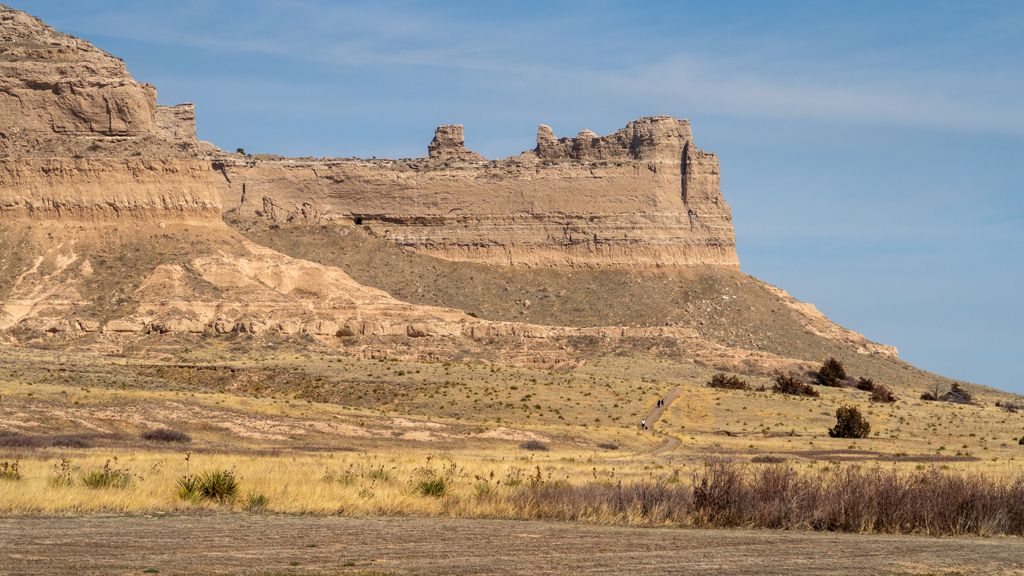 Scotts Bluff National Monument was a fairly small and straightforward national monument. Admission was free, and upon entering, you had two op­tions for exploration: you could either park at the bottom and hike your way up to the top, or you could take the Scotts Bluff Summit Road via ve­hi­cle. I decided to do both. 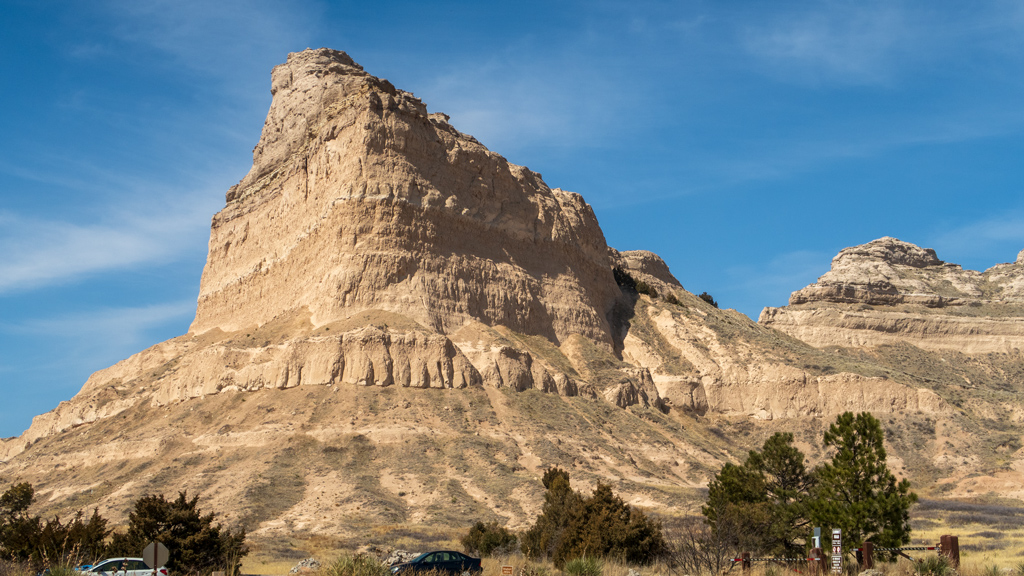 Because of the shape of the National Monument, the hiking route started as a paved trail that stretched far outwards to the northeast, cutting through Scotts Spring. 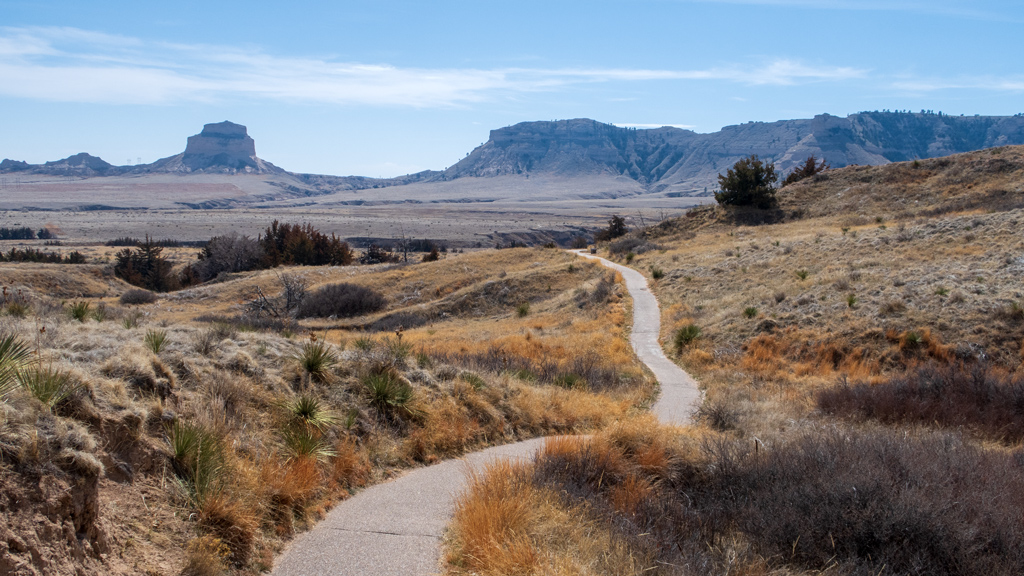 Around that area, I was able to find some wildflowers, though they weren’t exactly the kind of flowers you’d see elsewhere, and I also wasn’t exactly sure whether or not they were still alive. 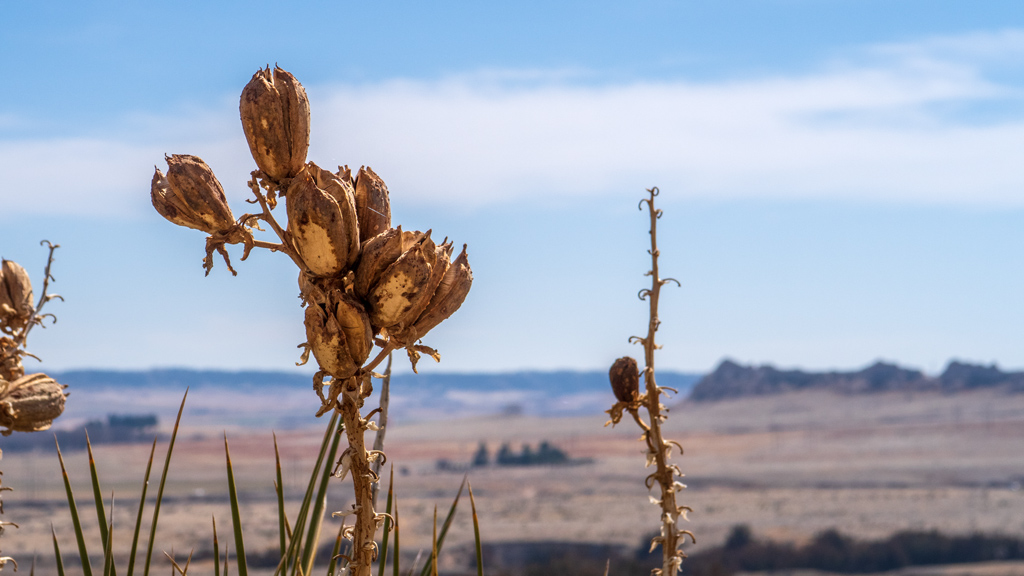 For a bulk of the first part of the hike, I thought the trail was relatively timid, but after making it more than halfway to the summit and looking back, I realized that the path was actually somewhat carved in the side of the mountain, and the drop off the edge was a lot steeper than it felt when I was walk­ing through that area. 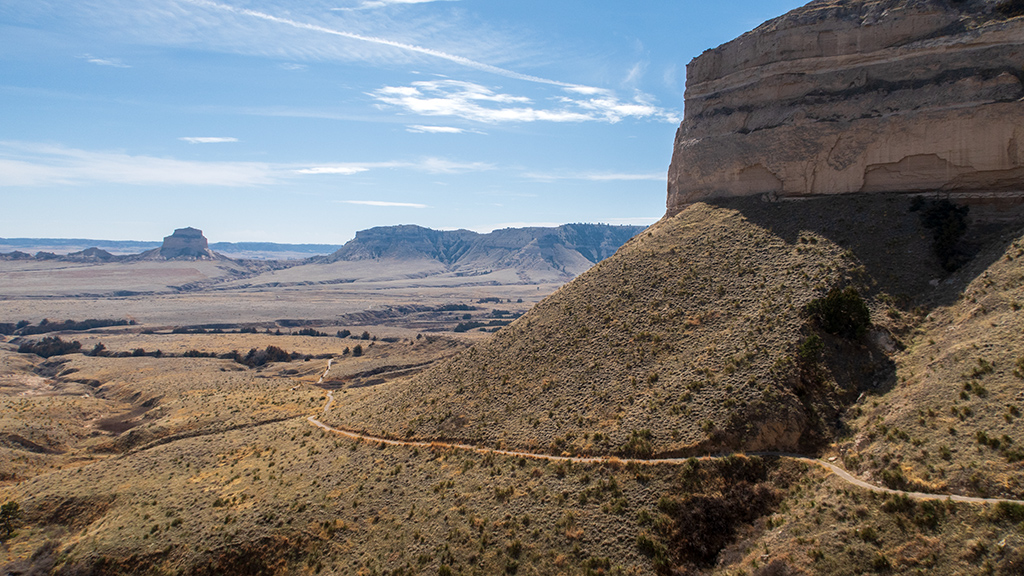 Eventually, I made it to a tunnel that cut through the rock and opened a pathway to the other side of the mountain. 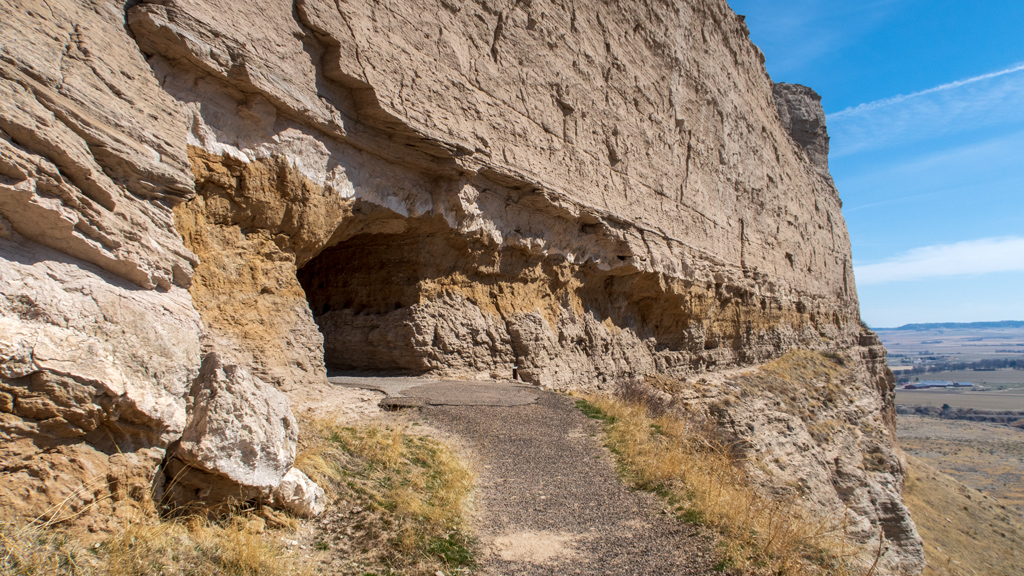 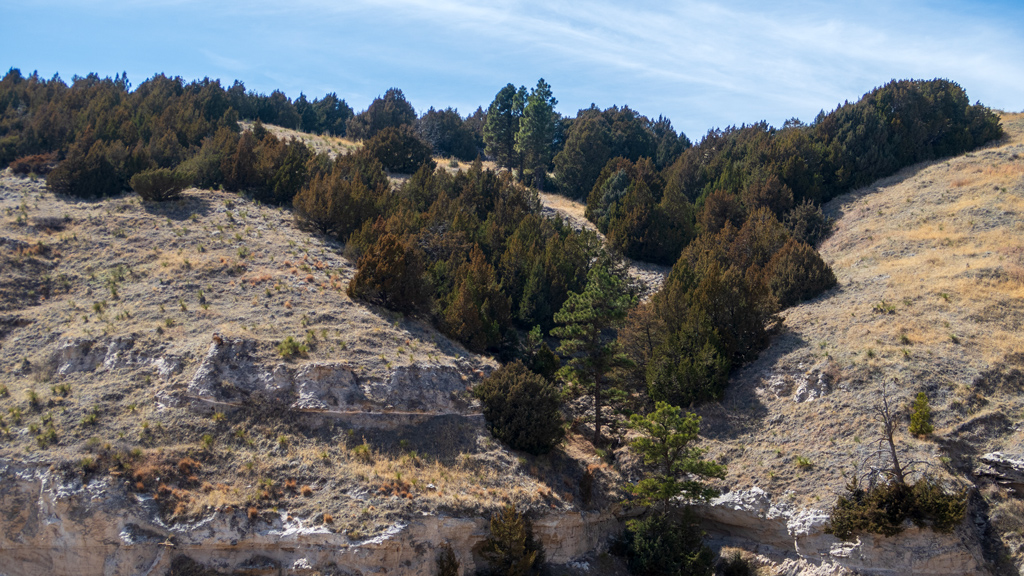 After some hairpin turns and a few steeper climbs, I made it to the North Overlook at the summit and was able to enjoy nice, sweeping views to the north, specifically of Scottsbluff, Terrytown, and the North Platte River. 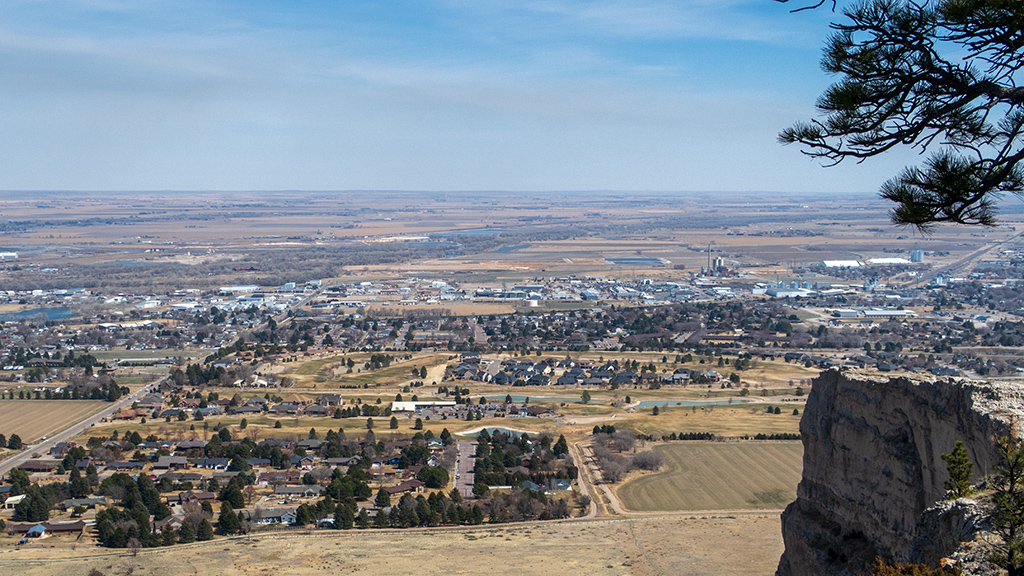 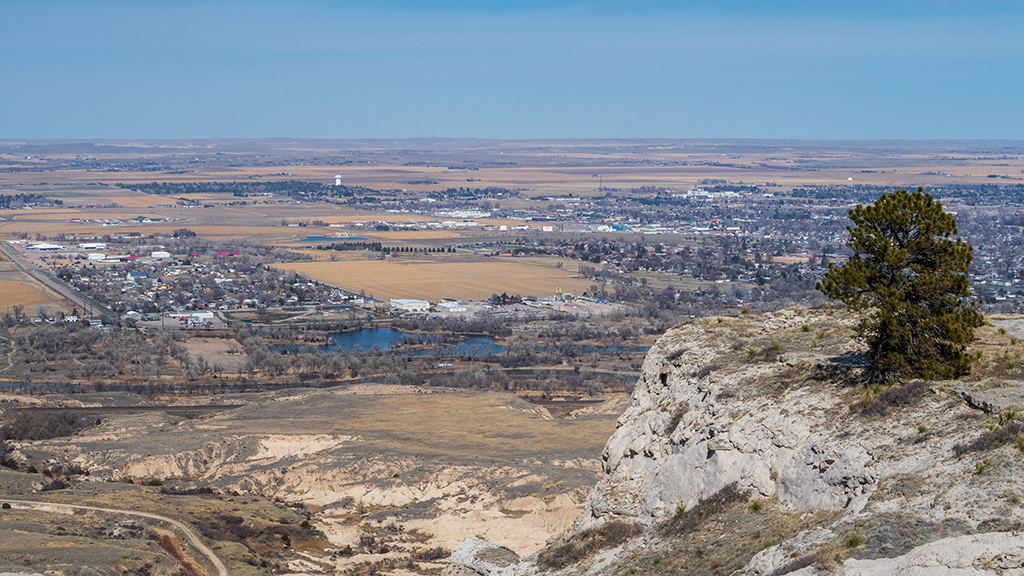 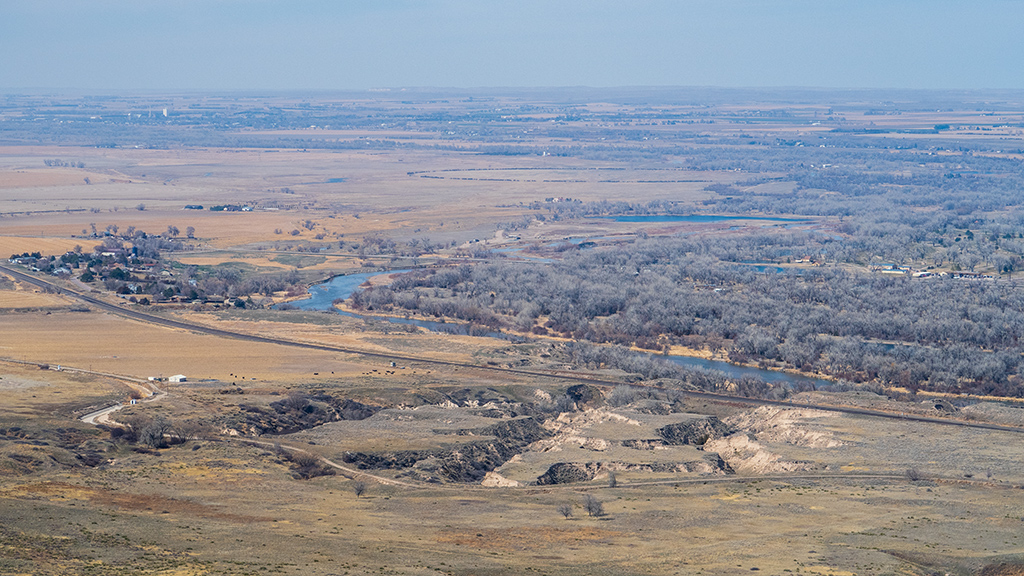 On my way back down the trail, I decided to snap a photo of the tunnel through the mountain. At the time of the photograph, it was so bright outside and so dark in the tunnel that it just looked pitch black in the tunnel, but I was able to extract a lot from the raw sensor data from my camera. There were three tunnels in the vehicular route to the top as well, but this hiker tunnel had a lot more interesting detail to the texture of the rock. 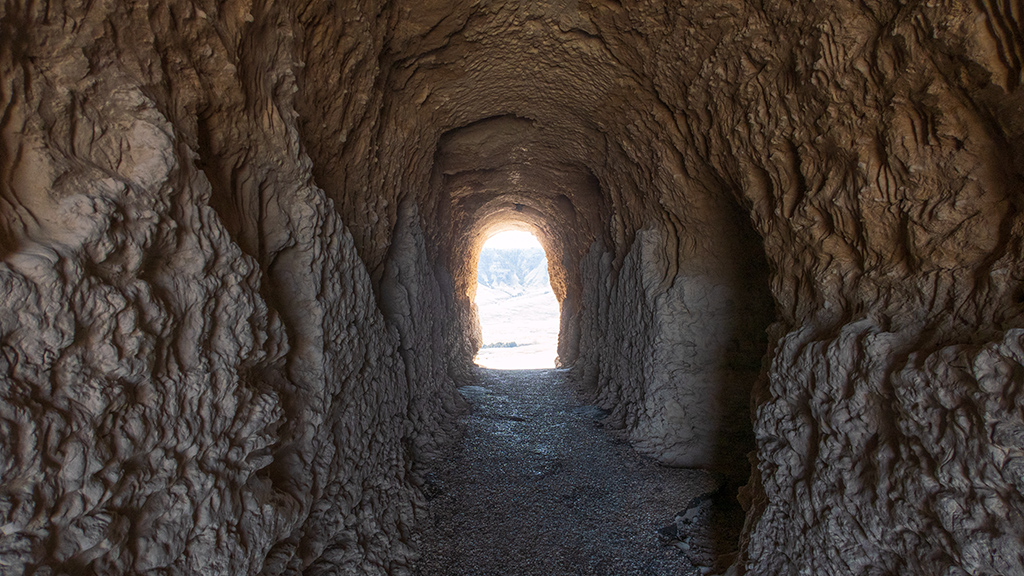 On my way down, I also snapped a photo of a rocky ridge that had signs instructing people to stay on the trail and avoid going off course (i.e., on the ridge) due to high risk of falling. I’m not particularly the biggest fan of randomly falling off a mountain and dying, so I heeded that warning. 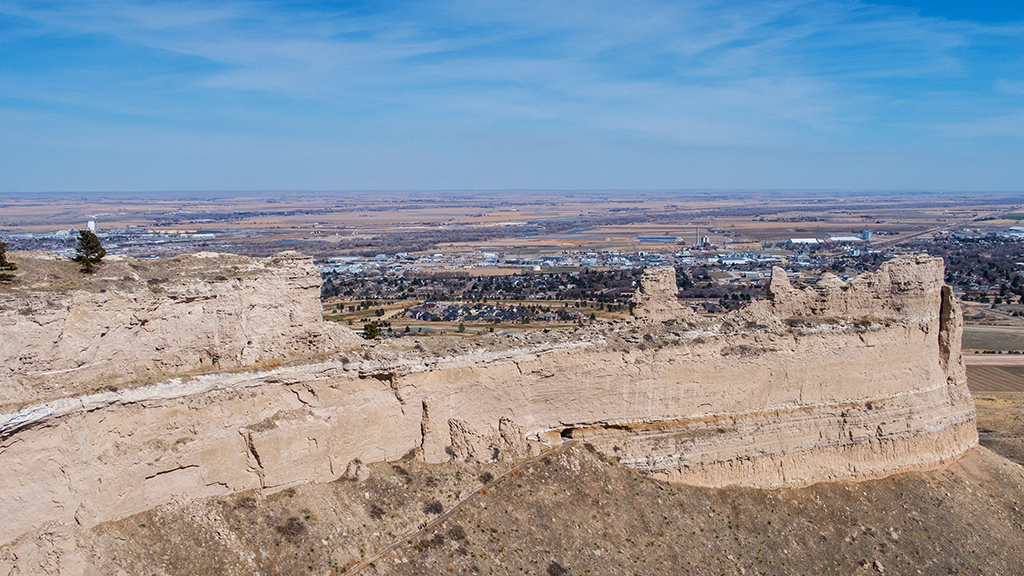 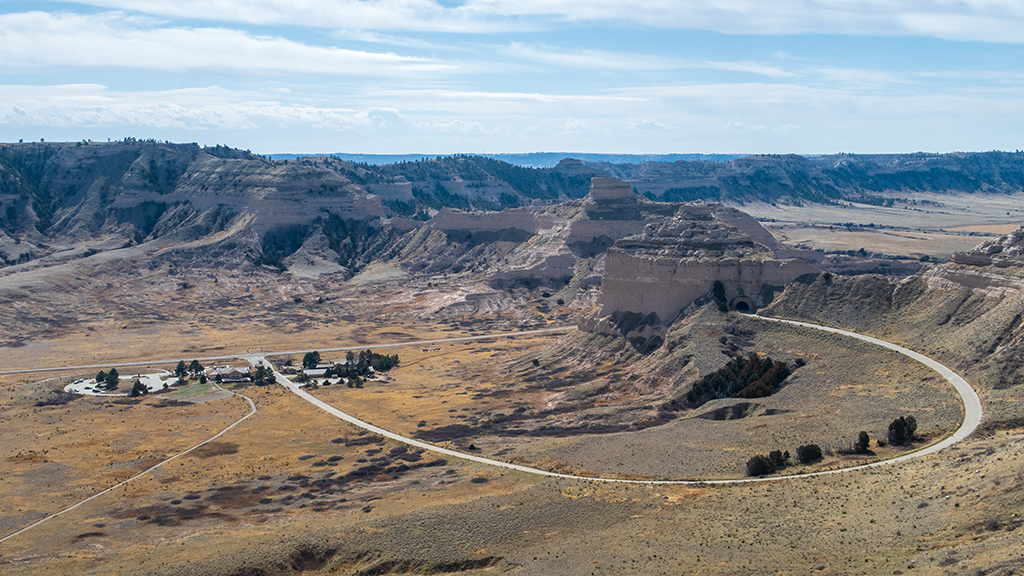 The walk from the parking lot to the South Overlook wasn’t recorded on my GPS, and I also started tracking a little bit late, but overall, my total hiking distance was a little bit over three and a half miles.

I’m glad I stopped by Scotts Bluff National Monument. It obviously isn’t exactly the most impressive or stunning national monument or national park I’ve ever been to, but it has its own charm with its relatively small size. As a tourist, you’d be able to see everything there is to see in one single visit of a few hours, but with free admission, I feel like this national monument is more used as a regular exercise area for the residents of Scotts Bluff County, being only about a ten minute drive from central Gering.