For my first stop of my continued road trip after visiting my parents, I’m visiting Indianapolis, Indiana, to which my childhood best friend (you may know him as Ed Lam or “Grainyrice”) and his mom moved not too long ago. Today is Ed’s mom’s birthday, so I treated her and Ed to dinner at Provision, a highly-rated res­tau­rant in the Ironworks Hotel.

Our meal started with a pre-appetizer while we were browsing the menus and deciding what to eat. I don’t recall what exactly was in the dish, but it was very tart and sour. 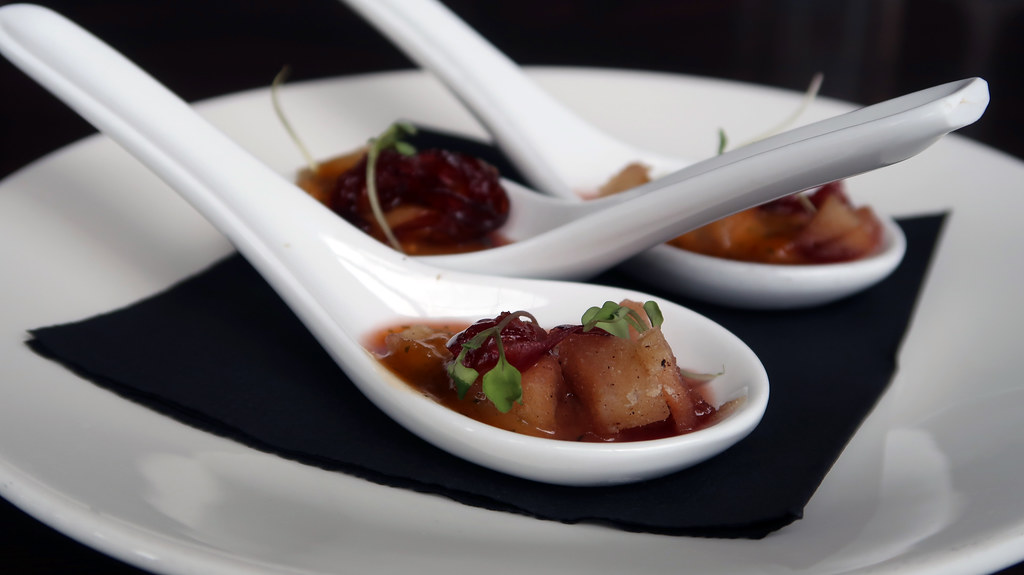 For our main appetizer, we ordered and split one crab hashbrown with spinach, candied jalapeño, fried egg, and jalapeño hollandaise. 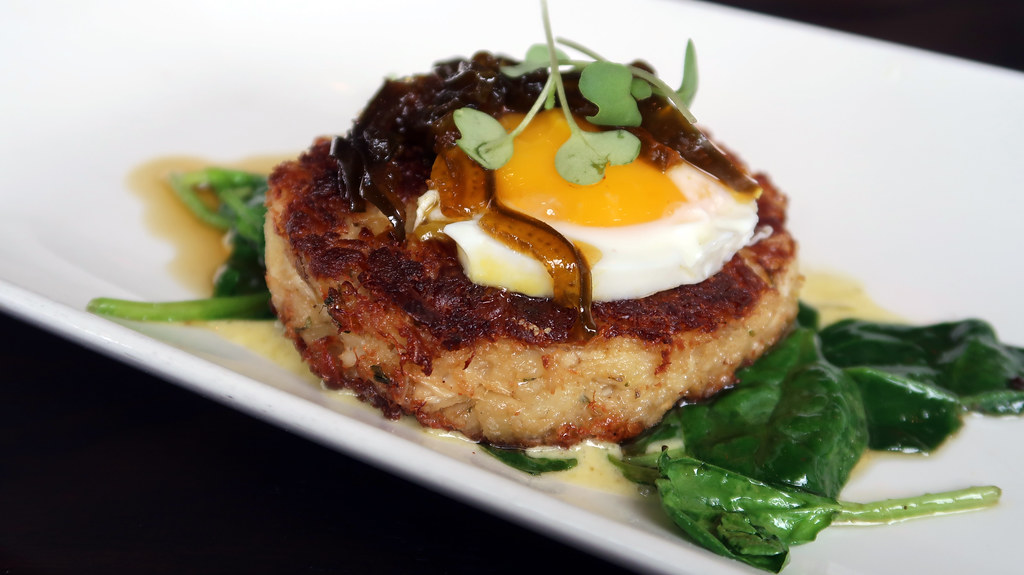 For my meal, I opted for the chef’s tasting menu, a six-course dinner with a soup, four various meat dishes, and dessert.

The opening course was chilled English pea soup drizzled with crème fraîche and topped with smoked sea salt, and a side of crispy Serrano ham. Upon the first bite, the flavor was overwhelmingly peas, but after I mixed in the crème fraîche and sea salt and nibbled on the ham along with it, it had a much better taste. The blandness of the pea soup was well-complemented with the saltiness and savoriness of the ham. 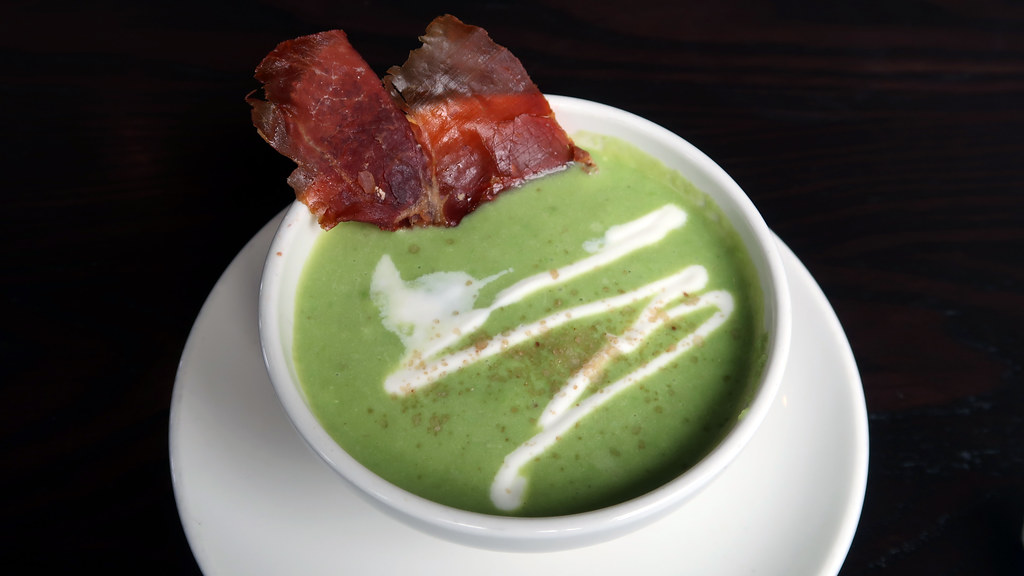 I’d say this was my least favorite dish for a few reasons. First, I’m a sushi enthusiast, and I immediately noticed that the yellowtail didn’t really taste much like yellowtail. This may tie in with the second point, which is that everything was extremely sour, probably because the strong flavor of the pickled straw­berries and capers got on the other ingredients. I’m not sure if this affected how the yellowtail tasted, but I’d say this tasted more like an extremely sour salad more than it did a fish dish. 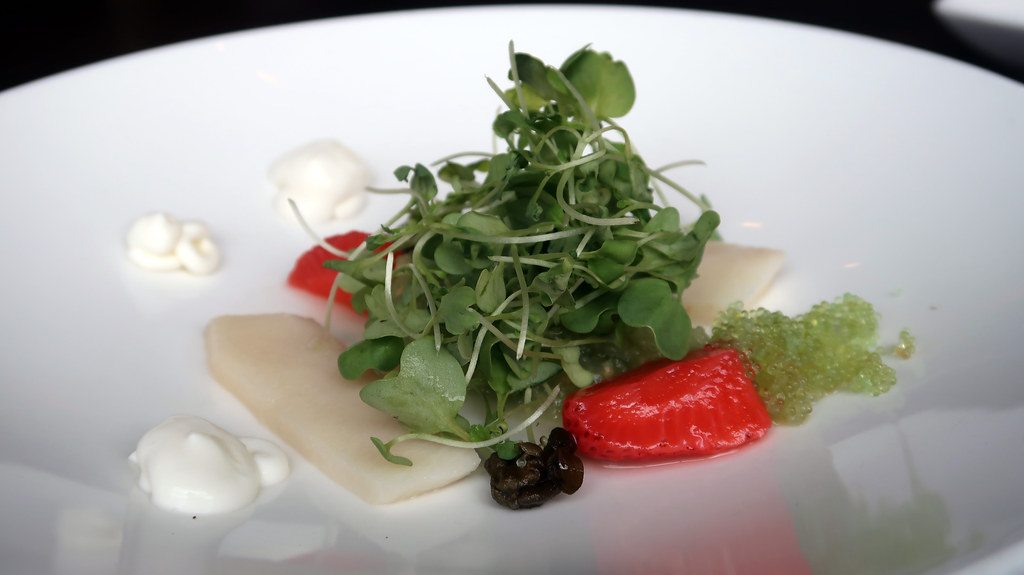 Third was lobster risotto with Fresno chile salad and lemon oil. This might have been bland for some other people, but this was perfect for my taste, and was my second favorite dish. There was lobster both in shreds and in small chunks, and the risotto had a smooth yet satisfying texture. This is also the first dish where I noticed the chef did a good job at maintaining the optimal serving temperature of the dish by heating the plate up; the top of the ri­sot­to was warm, but after digging in a bit, the innards were nice and hot. 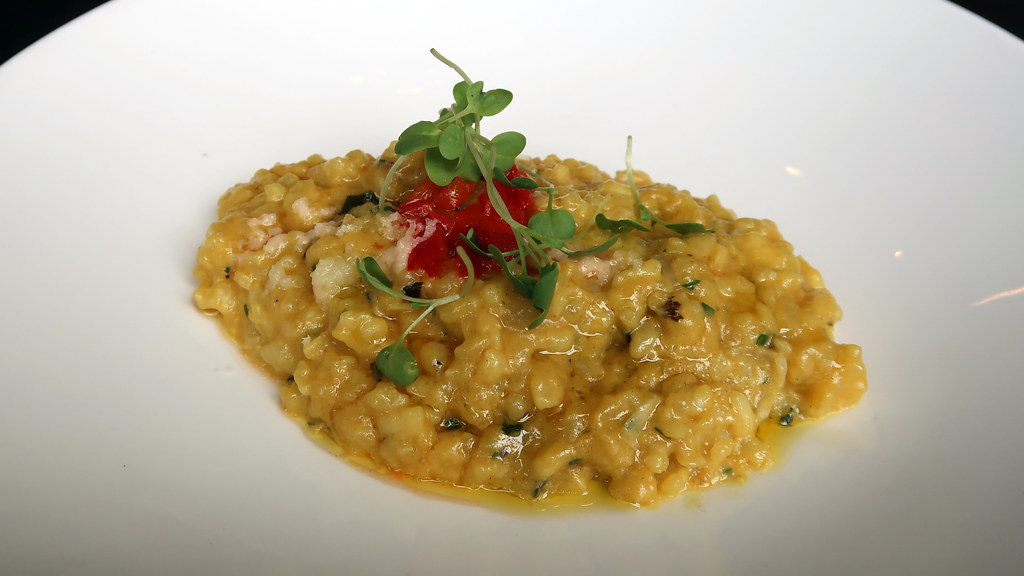 The next course was quail with sage, apple and celery root purée, and fig demi. This was my first time eating quail, and I thought it was fairly un­der­whelm­ing—it tasted mostly like turkey. The preparation was nice—it was crispy on the outside but juicy on the inside. However, I think quail just might not have the highest-quality cuts available, so it just tasted like generic meat. It wasn’t bad, but I’d say this was my second least favorite dish. 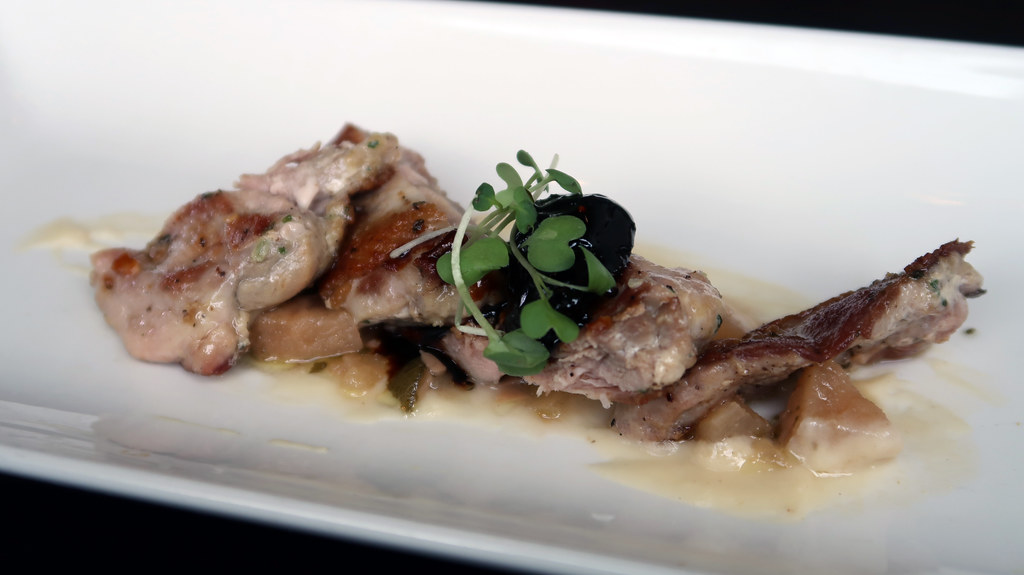 Fifth in line was Japanese A5 Wagyu seared in olive oil and surrounded by pink peppercorn and sea salt. As you may have guessed, this was my favorite dish.

The Japanese use A, B, and C to grade their meat’s cutability, which represents the amount of meat taken from a carcass as calculated by a particular for­mu­la. “A” means it has higher yield than standard, “B” means it has standard yield, and “C” means it has lower yield than standard. After the letter, you’ll see a number from 1 to 5; this represents meat quality as based on things like marbling, coloring, and texture. A score of “1” is the lowest and “5” is the highest.

This dish was a perfect example of the melt-in-your-mouth quality of beef I would expect from A5 Wagyu. I accidentally overdid it with the sea salt a bit for my first bite, which I was disappointed about, but after realizing that the crystals on the side were literally pure salt, I used it in moderation for future bites, and the rest was amazing. The sear on the outside added a perfect amount of crisp to the otherwise buttery soft inside.

The waiter let me know that they usually sell this for $25 per ounce, so a standard 8-ounce steak would cost $200. The portion I received was 2.5 ounces, so I realized that the chef’s tasting menu was actually a pretty amazing deal (I’ll do an overall price breakdown at the end). 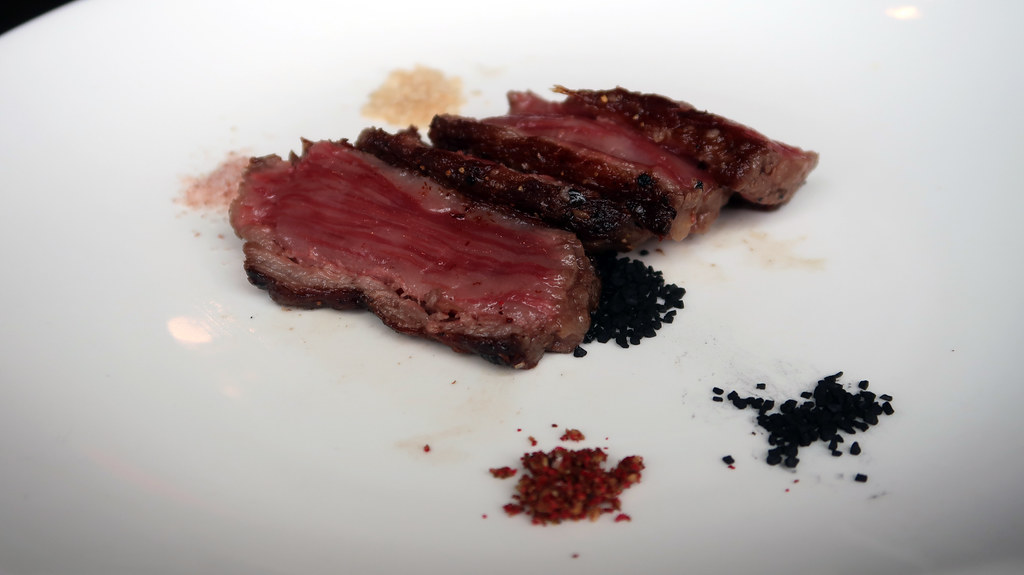 The final course was dessert: ricotta donuts with maple cream, bacon crumble, banana ice cream, two cuts of strawberry, and a blackberry. This ended up being a fairly stereotypical dessert dish. The main thing I liked about it was that it wasn’t overwhelmingly sweet, and the banana ice cream had a unique taste profile where it tasted like vanilla first, but once you leave it in your mouth for a few seconds, the banana flavor emerges. 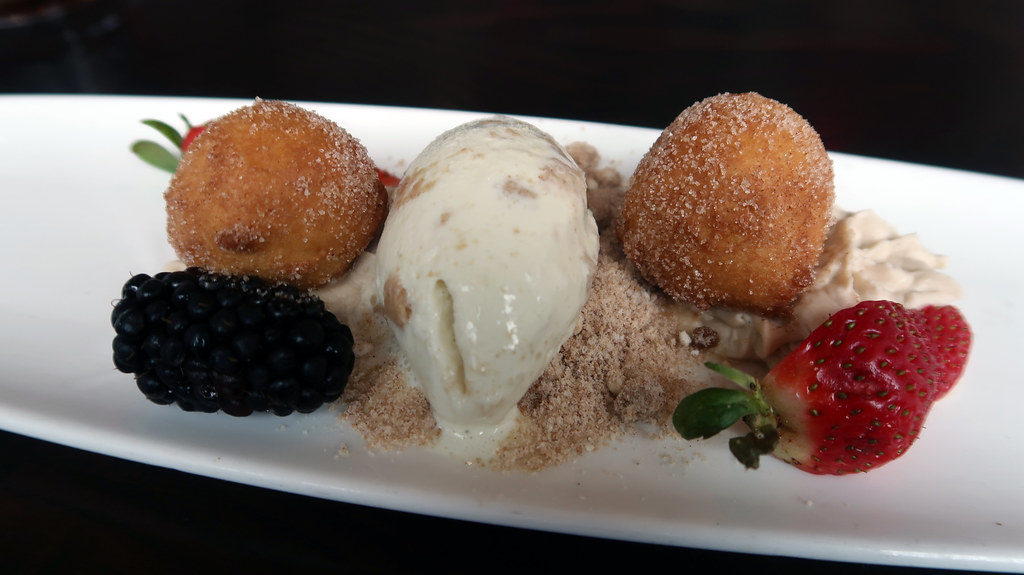 Instead of the full-blown chef’s tasting menu, Ed’s mom opted for a “miniature” version of it, called the Devour Summerfest. Apparently this is a thing in which over 100 restaurants participate by offering value-priced three-course meals.

Her first dish was an appetizer, for which she picked shrimp and chicken gyoza with pineapple ponzu, spicy sauce, and pickled Fresno. I tried a small piece of the edge of one of them, and it tasted like fairly generic fried dumplings. 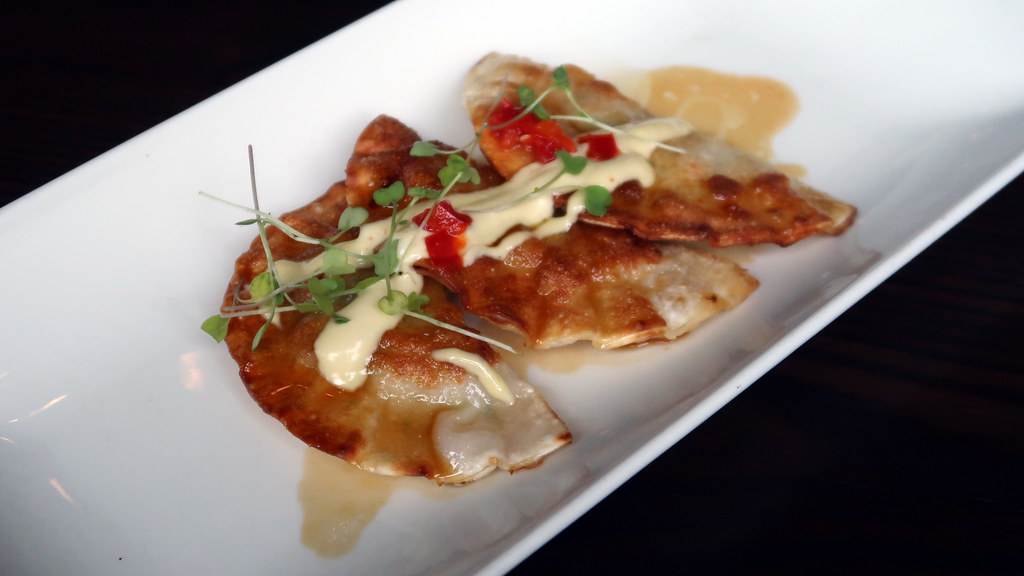 For her main course, she got salmon with plantain curry, cucumber, pickled onion, harissa raita, and lentil. 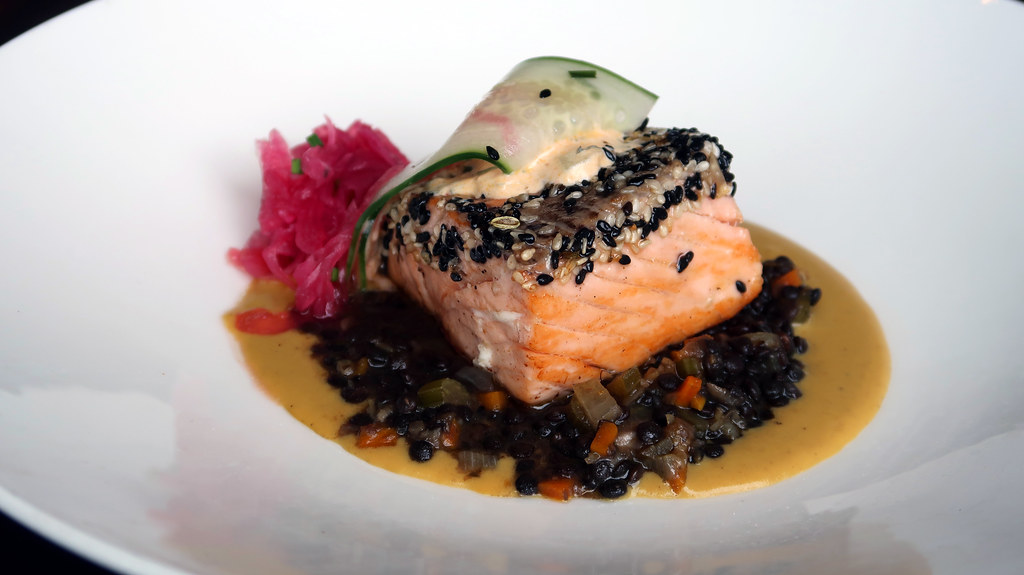 Ed was probably extremely bored the entire time, because, while I got a six-course meal and his mom had a three-course meal, he just got a normal menu item. He had the short rib with herb spaetzle, asparagus, corn, fennel, potato, and smoked onion demi. 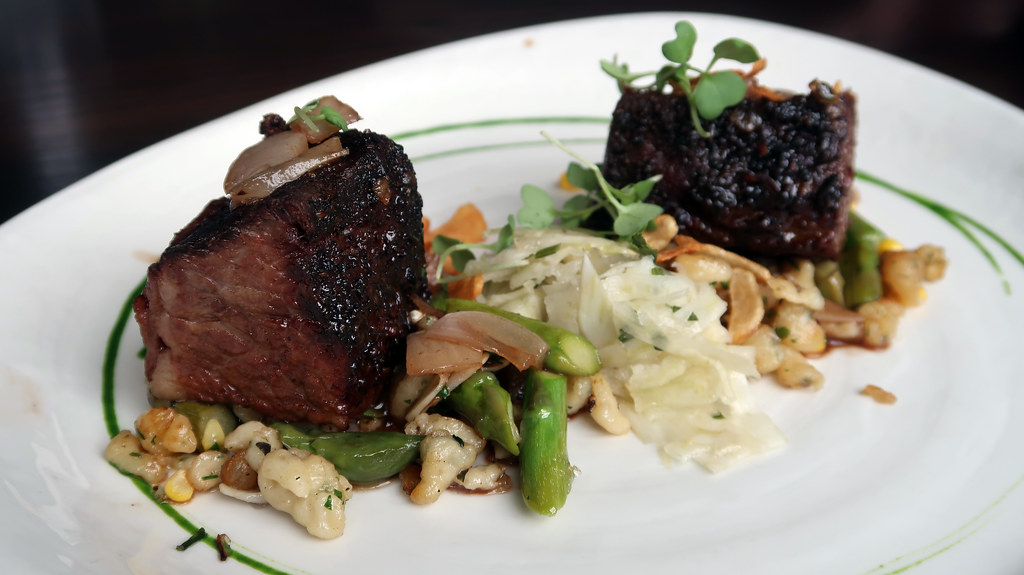 And finally, for Ed’s mom’s dessert, she got a cheesecake with cherry preserves and pistachio. Usually when you make a reservation to a high-end res­tau­rant, they’ll ask you whether you’re just visiting for a regular meal, or if there is a special occasion; I marked down that it was her birthday, so they turned her cheesecake into a miniature birthday cake. 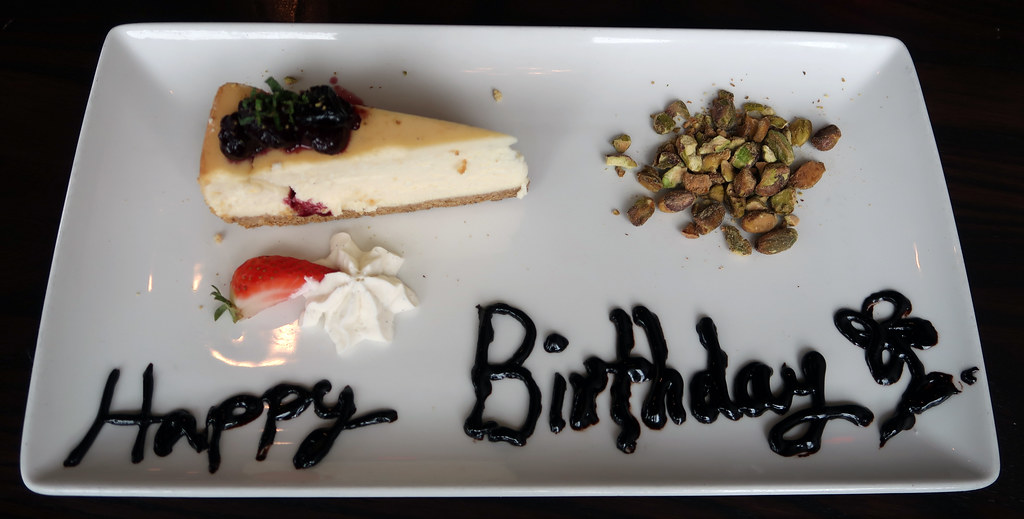 Ed also had dessert—an Indiana sugar cream pie with a candied orange slice and Turkish coffee ice cream. Unfortunately, I only took one photo of his des­sert, and it ended up out of focus, so I don’t have a picture to share.

Here is the breakdown of what I paid:

I thought this was a great deal. I recently went to Nonesuch in Oklahoma City, a similar tasting menu restaurant, which cost just shy of $440 for two peo­ple. Although Nonesuch had 11 courses while Provision only had 6, the portion sizes at Provision were proportionally larger. Although Nonesuch was much better at food presentation, I think I would say that the taste was better at Provision, and to me, that’s the more important part.

The waiter comped Ed’s mom’s dessert for her birthday, so we ended up getting a $10 discount.

I enjoyed my meal, and Ed’s mom appeared to have had a good time as well, so I’d say this was overall a good dinner. If you’re ever in the northeast In­di­an­apolis suburbs and this restaurant is within your price range for a meal, I’d definitely recommend giving it a visit.