I’ve had poor eyesight and have worn glasses since I was a fairly young child. My eyesight got progressively worse throughout elementary school and into middle school, so my parents took me to an optometrist on a routine basis to get stronger glasses.

My final optometrist appointment was when I was just shy of 14 years old, in 8th grade. At that time, my dad worked for the United States government and he had some family health spending plan that was about to run out for the calendar year. To make sure we wouldn’t lose out on free money, he got me some new glasses. There was quite a sum of money left in this government-sponsored plan, so we ended up purchasing the most expensive glasses with every single possible additional lens option. The price of the glasses exceeded US$400.00, which, adjusted for inflation, would be over US$530.00 in today’s dollars.

Since then, it didn’t really seem like my eyesight was getting any noticeably worse, so I never went back to the optometrist. I continued wearing those same glasses year after year. “You get what you pay for” definitely applied here, because those glasses were invincible. I would regularly get hit in the face with balls while playing sports, and I’ve gotten kicked in the head on numerous occasions in martial arts. Yet, my trusty glasses stood by my side.

These glasses were made out of a generic, off-brand version of Flexon, a flexible titanium. You can equate this to a memory foam mattress, but instead, it’s sort of like memory metal glasses. That also probably explains why they seemed to be indestructible—because they actually were, to some extent.

Unfortunately, it seems like this off-brand version of Flexon doesn’t last forever. After 15 years of daily use, it lost its flexibility enough that the bridge of the glasses became brittle and randomly snapped.

Of course, this couldn’t have just happened a month ago while I was still home. Oh no, that would be far too convenient. So now, instead, I am in Salt Lake City, three weeks into my cross-country road trip, and I do not have functional glasses.

I found some tape.

Considering that I literally cannot see or do anything without my glasses, I needed to find some sort of solution that was more viable than having a strip of packaging tape loosely holding the two halves of my glasses together as securely as an ant trying to carry a twig sixty times its mass. Because of this, eve­ry­thing was in a constant flux of random distortion, sending me in a spiral of dizziness.

I did some research online and found a glasses repair shop. It was almost half an hour away and two cities over from where I’m staying in Salt Lake City, but it appeared to be the only dedicated glasses repair shop in the entire Salt Lake City metropolitan area. I sent them an email ahead of time to confirm that they could fix my glasses; they let me know that they could grind off the existing bridge and install a new one, and it would take about an hour.

I showed up at the repair shop, only to discover that I was 5th in line to get my glasses repaired. The actual process itself did indeed take about an hour, but I would have to wait about four hours before the technician could start working on my glasses. The worst part is that, during the diagnosis, he took off the packaging tape that I had so intricately applied to the bridge of my glasses. So now I was left with a five-hour wait time and re-broken glasses.

He told me to come back tomorrow morning if I wanted to avoid a long wait. In the meantime, he spent about a minute haphazardly soldering my glass­es back together so I could at least put them back on to drive back to my hotel room and be a functional human being for the rest of the day. He said the solder might come apart after a day and claimed it was scuffed, but it was definitely far more reliable than the tape I had put on prior.

There was also one additional minor problem. Apparently, getting my glasses fixed in this manner would cost $89. I understand that installing a new bridge and properly realigning a pair of glasses requires specialized skill, but that amount still felt a bit too high for my liking.

I started looking for some alternatives and found an eyeglass store literally next door to the repair shop. Apparently I would be able to get an eye exam (which I was clearly overdue for, seeing as the recommended time between exams is 2 years) by an optometrist on-site, and be able to walk out with a new pair of glasses on the same day in most circumstances.

For the first time in 15 years, I got my eyes checked again. 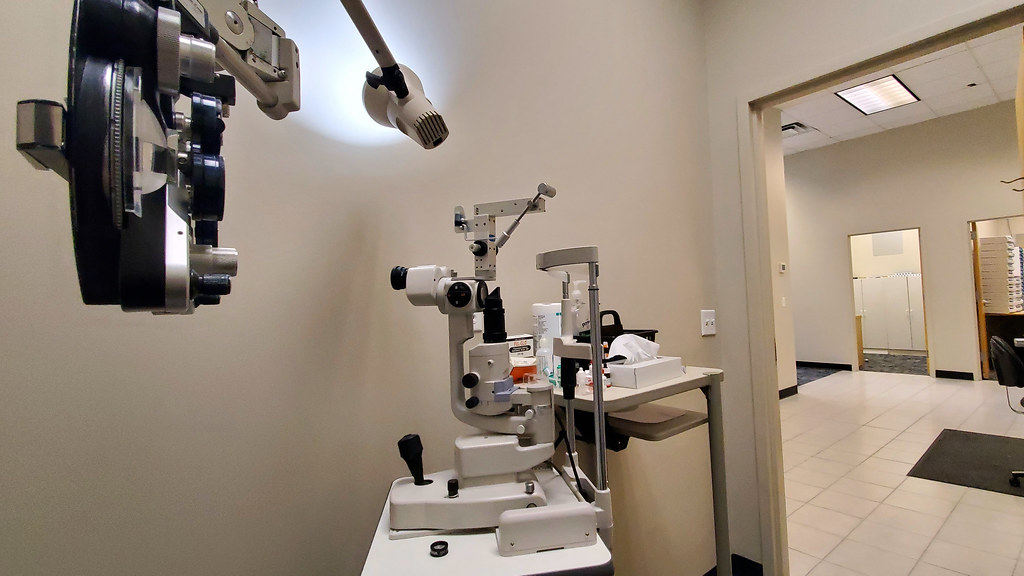 After getting my new prescription, I headed out to the retail area of the store where I went through a good 12 or so pairs of glasses until I found some that I liked. The glasses I picked? An off-brand generic version of Flexon glasses. Again.

The eyeglass store I went to apparently has a miniature laboratory at every location, so if they have the appropriate frames and lenses in stock, a tech­ni­cian can put together the glasses within a day. I was originally promised the glasses tomorrow morning, but they ended up having it ready for pickup by the evening, so I ended up getting same-day service.

This is my first time with new glasses in 15 years (obviously), and it’s quite a jarring experience. I have a massive headache, I’m dizzy, I have distorted vi­sion around the edges of my glasses, I have blurred vision near the center, and I’m having much more trouble with depth perception (which is bad, be­cause I already had issues with depth perception).

Apparently it’s normal for it to take a few days, or even up to a few weeks, for your eyes to adjust to the new lenses. My myopia got a little bit worse, but apparently I developed a substantial amount of astigmatism, and it appears like the new astigmatism correction on my lenses is what’s causing a majority of these symptoms.

I did some additional research online, and the general consensus appears to be that the quickest way to get accustomed to new glasses is to keep wearing them. Thus, I am sitting here at my computer, fighting through the nausea, writing about how everything in my life loves to troll me, even my glasses.

I leave for Wyoming on Saturday. Here’s to hoping my eyes finish adjusting before then.

Well, the story doesn’t end here. The distortion on my glasses didn’t get better. In fact, it got significantly worse. The instant I put my new glasses on yes­ter­day, I got a severe headache that lasted the rest of the day. My absence of depth perception persisted, and if I moved my eyes around at all (as op­posed to just looking straight ahead), everything would be out of proportion.

I also had a few “incidents,” to say the least. The first involved exiting my hotel room and trying to go down the stairs, but literally missing the first step because I couldn’t tell how far away it was, and falling down the stairs. The second was a bit more severe and involved. It was… an “unfortunate driving situation.” I’ll leave it at that. (Nobody got hurt, and no property ended up being damaged.)

I decided that now was not the time to get new glasses. It’s not that I didn’t trust the science behind just wearing the new glasses and getting used to them. The problem is that I can’t really do that right now when I’m on a cross-country road trip and am very active on a daily basis.

If this had happened while I was still in Las Vegas, it would’ve probably been doable, but the fact that I’m not at home, coupled with the fact that my op­tom­e­trist put me straight to my proper-strength prescription, about 6 steps higher than my current glasses (as opposed to incrementing me up lit­tle by lit­tle), made it so having new glasses right now is not really too viable.

I returned my new glasses and got a full refund (minus the cost of the eye exam, which is fine, because I still got a prescription signed by an optometrist, and he also inspected my eyes and informed me that they were otherwise healthy).

As for my old glasses, I went back to the repair shop and got the full bridge replacement done. The rest of my glasses were obviously still tattered, but the bridge looks as good as new. It is sturdy and securely holds both halves of my glasses together. I can continue wearing these for now, and later on, I can either go to a different optometrist when I get back home and ask them to prescribe me something that isn’t such a jarring difference, or I can just get la­ser eye surgery.

I mean, what’s the fun in life if, after your glasses snap in half and you get them fixed, they don’t snap in half again at a different location.

I reattached the right leg of my glasses using super glue. I obviously can’t fold it in anymore, but at least it’s nice and sturdy now.

When I purchased the super glue, I intentionally purchased a two-pack. I’m saving the other tube for when the left leg of my glasses also inevitably snaps off.