My travel experiences lately have been great, but it wasn’t always like that. When I first started traveling, I took American Airlines a lot (instead of Delta Airlines), and because I had very limited “travel hacks” knowledge and no elite/loyalty status, I ended up not really enjoying travel. American Airlines also always tended to be unreliable, and I had flight delays or other kinds of flight-related problems basically every single flight that I took.

After I got more used to traveling, started getting regular complementary upgrades due to elite/loyalty status, and changed my air carrier of choice to Delta, I stopped having issues. I had actually never had a problem with Delta, at all, whatsoever, apart from one single flight out of New York City where my flight was delayed by a bit due to inclement weather.

Today was the first time that I actually had a problem with Delta Airlines.

My day started with waking up, showering, getting some work done, refueling and returning the rental Ram Rebel, and going to the Turkish Airlines lounge at Dulles International Airport, one of the only lounges still open due to COVID-19.

When it was time for my flight, I headed over to my gate and boarded the aircraft on time. However, once we were on board, we were informed that there was a minor issue—there was some extra paperwork that needed to be filled out, and that needed to be taken care of prior to departure.

Honestly, after some of the absurd reasons I’ve suffered from delays from American Airlines, ranging from “there is an overhead bin that will not close” to “the toilet will not flush” to “we ran out of planes so we have to fly one in from Mexico City” and “we ran out of pilots so we have to fly some in from Baltimore” (all of these reasons are 100% non-exaggerated situations that happened to me while flying American Airlines), a paperwork issue seemed negligible. I patiently stayed seated and waited for departure.

Then, a second piece of unfortunate news was delivered to us. Apparently the jet didn’t have enough fuel, and they had to wait for the fuel truck to come refuel the aircraft. They were unsure how long that would take, but said that they would get us in the air as soon as possible. I continued patiently wait­ing for departure.

As we approached the 30-minute mark of delays beyond our expected departure time, I started getting a bit concerned. I had an option to take a non-stop flight from IAD to LAS via United Airlines, but because of my hatred of United Airlines and my love and loyalty for Delta Airlines, I intentionally took a flight that had a layover at DTW. This was a fairly tight layover—we were expected to arrive in Detroit at 6:03 PM EST, I would have 22 minutes to deplane and get to my next gate before boarding began, and the flight out of DTW to LAS would depart at 6:55 PM EST.

Right as we hit the 35th minute of delays, the pilot announced that we were good to go and we would be taxiing to the runway shortly. They retracted the jet bridge and we started moving. At this time, I got a notification on my phone from my Delta Airlines app telling me that, due to the delay, I would not have sufficient time to make my connecting flight, and as such, they would be automatically rebooking me to the next DTW-to-LAS flight.

Of course, I was a bit disappointed, because the next available flight out wasn’t until tomorrow. I figured that I would just have to go to Delta customer service, collect a hotel and taxi voucher, and spend a night in Detroit before heading out tomorrow evening. I even considered just getting a rental car and using this opportunity to spend 24 hours in Detroit touring the city and exploring.

But there was an inkling in the back of my mind that told me that there was still an ever so tiny chance that I might still make my regularly scheduled connecting flight.

I sat back and relaxed for the one-and-a-half hour flight, as if biding my energy for what was to come.

The 35-minute departure delay ended up translating to a 26-minute arrival delay. At 6:29 PM EST, the jet arrived at the gate. After doors to arrival, crosscheck, and deplaning, it was 6:34 PM EST. This was a Bombardier CRJ, which meant the overhead bin space isn’t large enough to accommodate normal carry-on luggage, so I had to pseudo-check my carry-on at the boarding gate. Waiting for my bag to come out from the ramp took another two minutes, and at 6:36 PM EST, I was zooming down the jet bridge.

I deplaned at Concourse C, and I needed to get more than halfway down the northeast wing of Concourse A, which involved going through an un­der­ground tunnel between the concourses by foot. Total distance to travel from gate to gate was right around 3,500 feet (0.66 mi, 1.07 km). 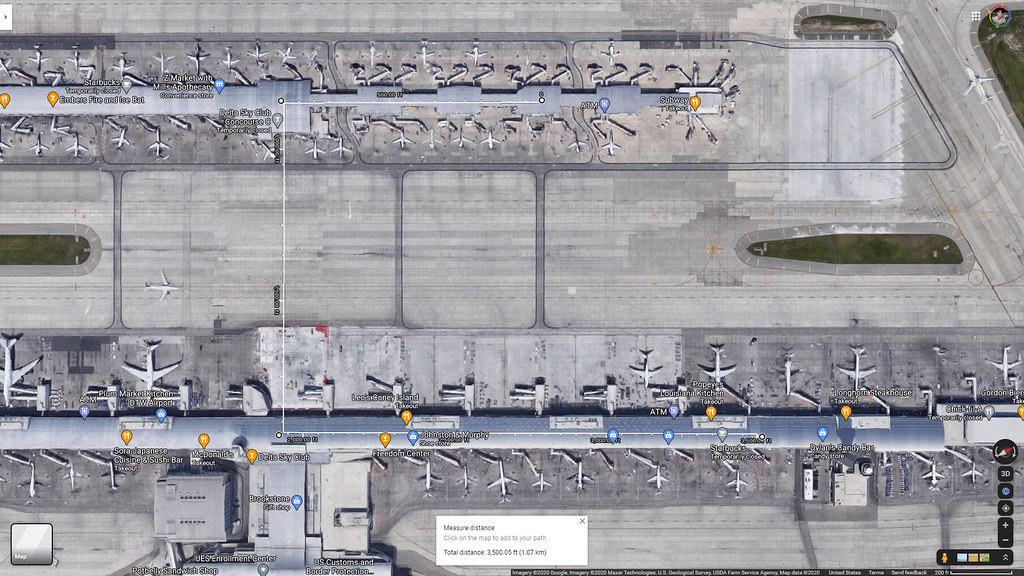 I arrived at the gate of my connecting flight at 6:43 PM, three minutes after boarding doors were supposed to be closed. The gate agent had received a no­ti­fi­ca­tion that my inbound flight had been delayed, and held the boarding door for me. I was the last one to waltz on the plane, apologizing to the flight crew and informing them that my connecting flight had been delayed—to which they replied, “we know.”

I think my Delta mobile app is very confused as to what happened, because it seems like it still thinks I need a rebooked flight for tomorrow. Little does it know that I occasionally turn into Usain Bolt if it means I can avoid having to delay my return home by a night.

You know that I’m going to fill out that customer satisfaction survey for that gate agent who extended boarding for three minutes for me, and leave her a glowing review. 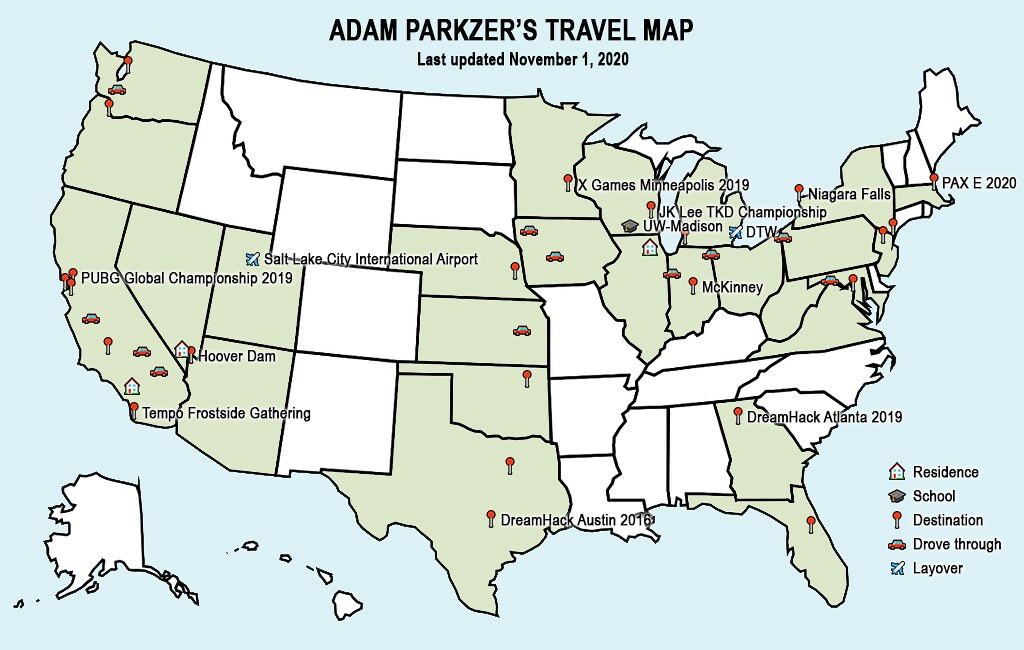 And with the conclusion of that trip, I add three more states—Virginia, West Virginia, and Maryland—to my travel map, bringing my total to 26 out of 50.