I flew into Seattle–Tacoma International Airport today to visit some friends, do some exploring, and work on a project with Tempo‘s game development crew. I’ll be sticking around for a day shy of a week.

Western Washington state was one of the most interesting places I’ve flown into because of the unique and dynamic terrain. The first notable thing I saw in Washington was Mt. St. Helens… which I’m not actually entirely sure if it actually was Mt. St. Helens, because I’m not familiar with the area. It could have possibly been Mt. Adams or Mt. Rainier, or maybe the mountain in the background of that first photo was Mt. Adams or Mt. Rainier.

In order to align ourselves properly to land on the runways at Seattle–Tacoma International Airport, we did a little loop up by Seattle and got pretty close to downtown. My window wasn’t very clean so the photos didn’t end up as crisp as I would’ve hoped, but I think they’re still pretty decent shots.

I think Delta Airlines is the best domestic U.S. airline when it comes to COVID-19 response. Back when I flew back home to Las Vegas from Orlando, I intentionally took an inefficient flight path through Minneapolis–Saint Paul just so I could fly Delta Airlines instead of American Airlines, because I trust Delta far more than American. (I flew American outbound to Dallas–Fort Worth, and it seemed like American wasn’t even blocking off middle seats anymore.)

Delta recently made it into the news because it had an incident where it literally brought a plane back to the gate to eject two passengers because they refused to wear face coverings. I was already committed to flying Delta whenever possible before that, but with that news, I knew that Delta would be the best choice.

It seems like Delta is continuing to emphasize their customers-first attitude, because after I woke up from a one-hour nap during my flight, I found this handwritten thank you note sitting on my arm rest. 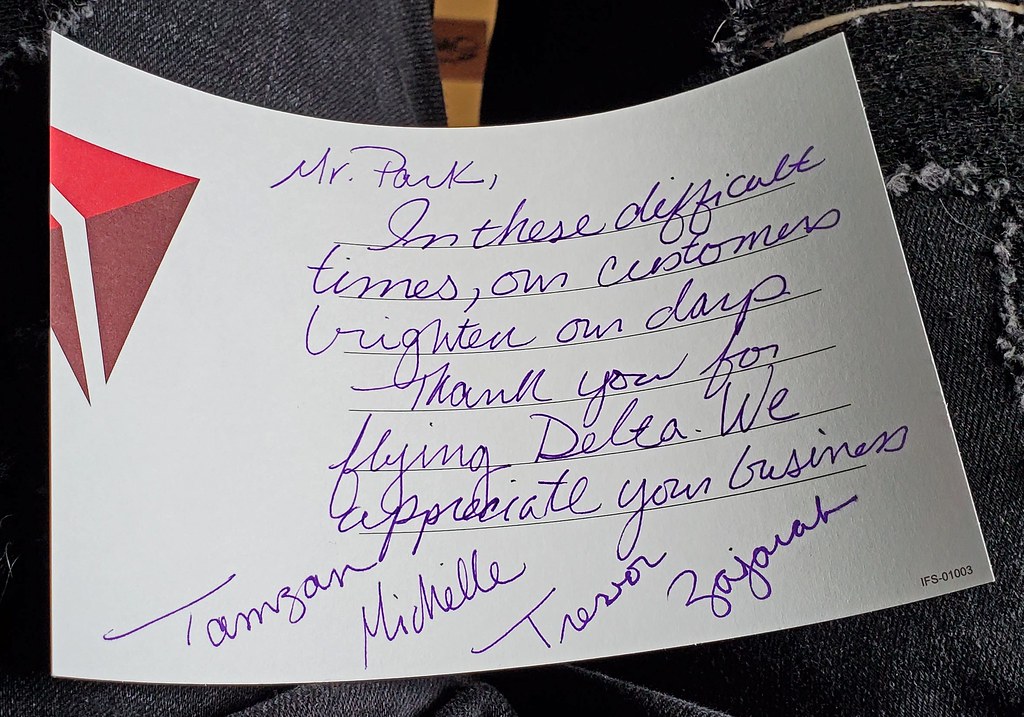