If you know me, it also probably doesn’t come as a surprise that I like white things. I find white to be a clean, crisp, modern color, and if I have a choice to purchase something that’s white (if that “something” isn’t already ubiquitously white), then I will seize that opportunity. I have all white furniture, bed sheets, towels, most electronics, rugs, lamps… you get the idea. I particularly like things that are white when they are not traditionally white.

One thing that is obviously not traditionally white is firearms. As far as I’m aware, as of today, the full line-up of Glocks consists of black (or dark gray, depending on how you interpret it) firearms, except for the Glock 19X, which comes in coyote (which is a brownish tan color). Glock does have some red and blue firearms, but all of those are for training purposes only—red for no firing capability, and blue for training ammunition for law enforcement only.

Of course, this made for a great opportunity to turn another one of my possessions white. 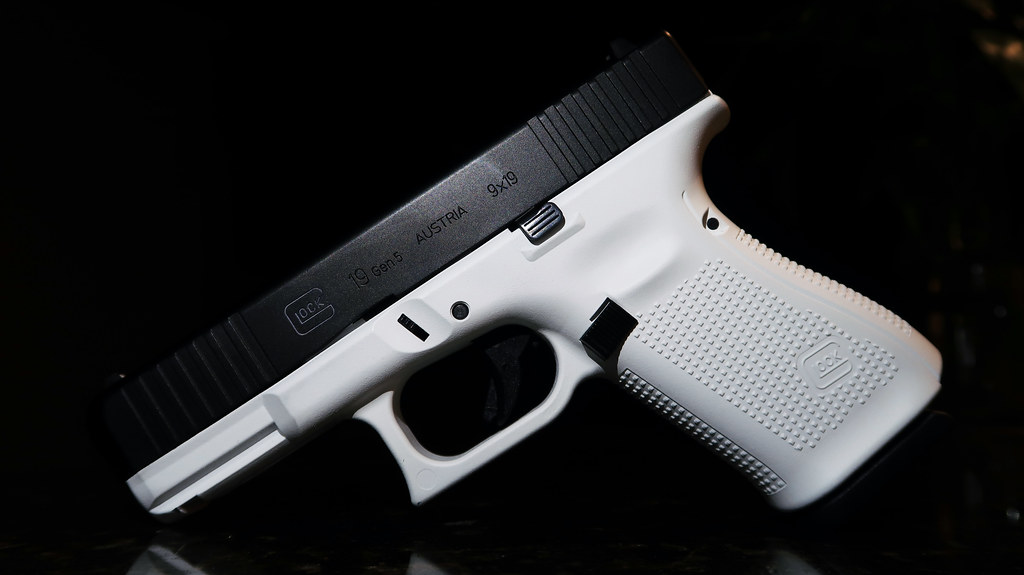 No, I did not take a can of spray paint to my gun. If I want something done, I like it being done right, and I knew for a fact that regular spray paint on the frame of a firearm would start coming off after my first few firing sessions just from the sweat and friction from my palms. Instead, I got it done by Magill’s Glock Store in San Diego, California.

The Glock Store converted my frame from black to white using a process called Cerakoting, which is applying a thin-film ceramic coating to an object to permanently customize its color. 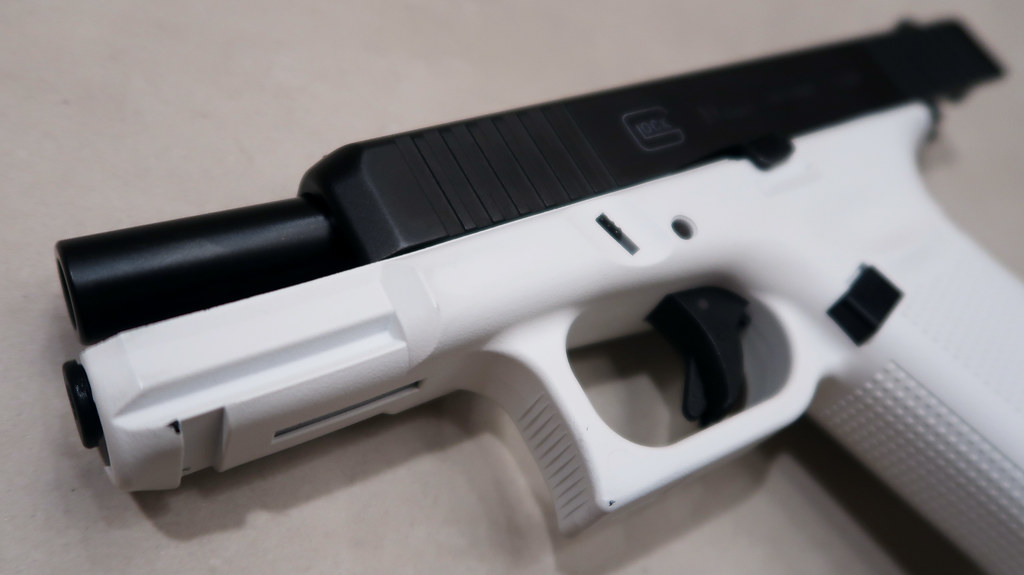 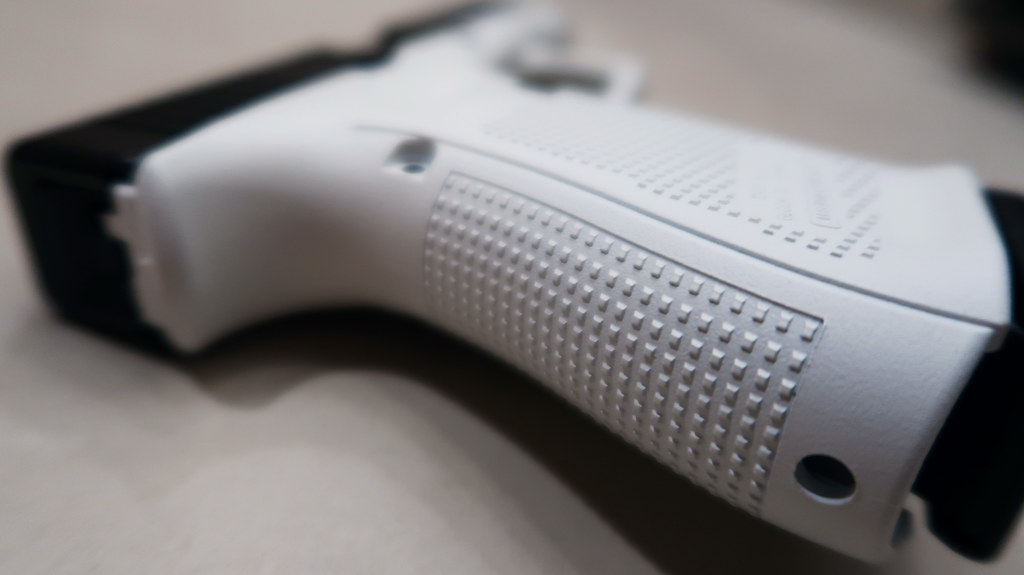 Overall, I’d say that I am mostly satisfied, though there were two minor issues with the customization.

First, I obviously only wanted the frame turned white and the slide, barrel, and hardware left alone. This was mostly followed, though there was a small section on the slide near the muzzle that had some overspill of white. The area of overspill probably measures around 1 millimeter by 3 millimeters, so it’s microscopically tiny and most people probably wouldn’t even notice it, but being the detail-oriented person I am, it did stick out to me right when I inspected the firearm.

Second, I had ordered a colorfill of the lettering on the slide of the firearm. I had put in a request for the Glock logo and the “19 Gen 5,” “AUSTRIA,” and “9×19” text to be colorfilled white. However, they only did the colorfill on the Glock logo, as well as the serial number on the other side of the slide. Unfortunately, they actually sent me photos ahead of time before shipping the firearm to me, and I somehow did not notice the missing colorfill in the photos, so I approved them and now mostly consider it my own fault.

In the second photo posted above (with the slide locked back), you might notice that there are also some additional black spots around the corner-edges of the frame. Those spots actually did not come like that from the Glock Store; those spots actually showed up after I had holstered and unholstered the gun a few times, which leads me to believe that it is a friction spot from rubbing against the inside of my holster. On top of that, I also noticed that it might be black discoloration on top of the white Cerakote, so I actually anticipate that the black spots would come off if I took some really fine sand­paper and gently scrubbed those spots.

One thing I’ve been asked about a few times is the concern that my firearm could potentially be misrepresented as a toy gun. That’s a valid point, so I decided to address it:

The main reason I’m not concerned about this is because I think white is still technically a “professional” color. If you go to your search engine of choice and look up “real guns disguised as toys,” those are the kinds of firearms that we should be concerned about—there are some pretty absurd and ridic­ulous patterns, and some criminals are going as far as to paint the tips of their real guns neon orange to make them actually look fake. There are also red guns as well, which, as I mentioned before, could potentially be mistaken for a practice firearm.

Second, the main reason you would even want a disguised firearm is to deceive law enforcement. If I do ever end up in a situation where my firearm draws unwanted attention with law enforcement, I won’t actually be troubled at all. Having formerly worked in law enforcement, I know what to do when interacting with a peace officer while armed, and I have all the licenses I need to carry firearms.

… and yes, for all the CS:GO and other FPS players, this is indeed like having a “real-life skin” for my gun. No, you were not the first person to point that out.