Disclaimer: I am not a registered financial or investment advisor, and even if I was, I wouldn’t be your advisor. To you, I am nothing more than someone on the Internet posting anecdotes via a personal blog on his website. This content is intended for comedic and entertainment purposes only. Everyone’s sit­u­ation is uniquely different, so consult a certified professional if you need guidance on your own financial strategy.

Last year, my friend Doug Wreden and I decided to do a fun investing competition where we would both put US$10,000.00 into stocks of individual, publicly-listed companies and find out whose portfolio balance was higher after one calendar year.

Doug livestreamed the stock selection process on his Twitch channel on Friday, January 21, 2022, though it happened after markets closed at 4:00 PM EST / 1:00 PM PST, so the orders went through the morning of Monday, January 24, 2022. I had some prior commitments on the 21st so I wasn’t able to join in on the broadcast, which meant I picked my stocks by myself over the weekend, causing my orders to also go through on the 24th.

Yesterday, Monday, January 23, 2023, was the final trading day of the one-year challenge period. The results are now in.

I know many of you just want to see the results and don’t care about the analysis, so here is what you’re looking for. If you suffer from hexa­kosioi­hexe­kon­ta­hexa­phobia, proceed with caution. 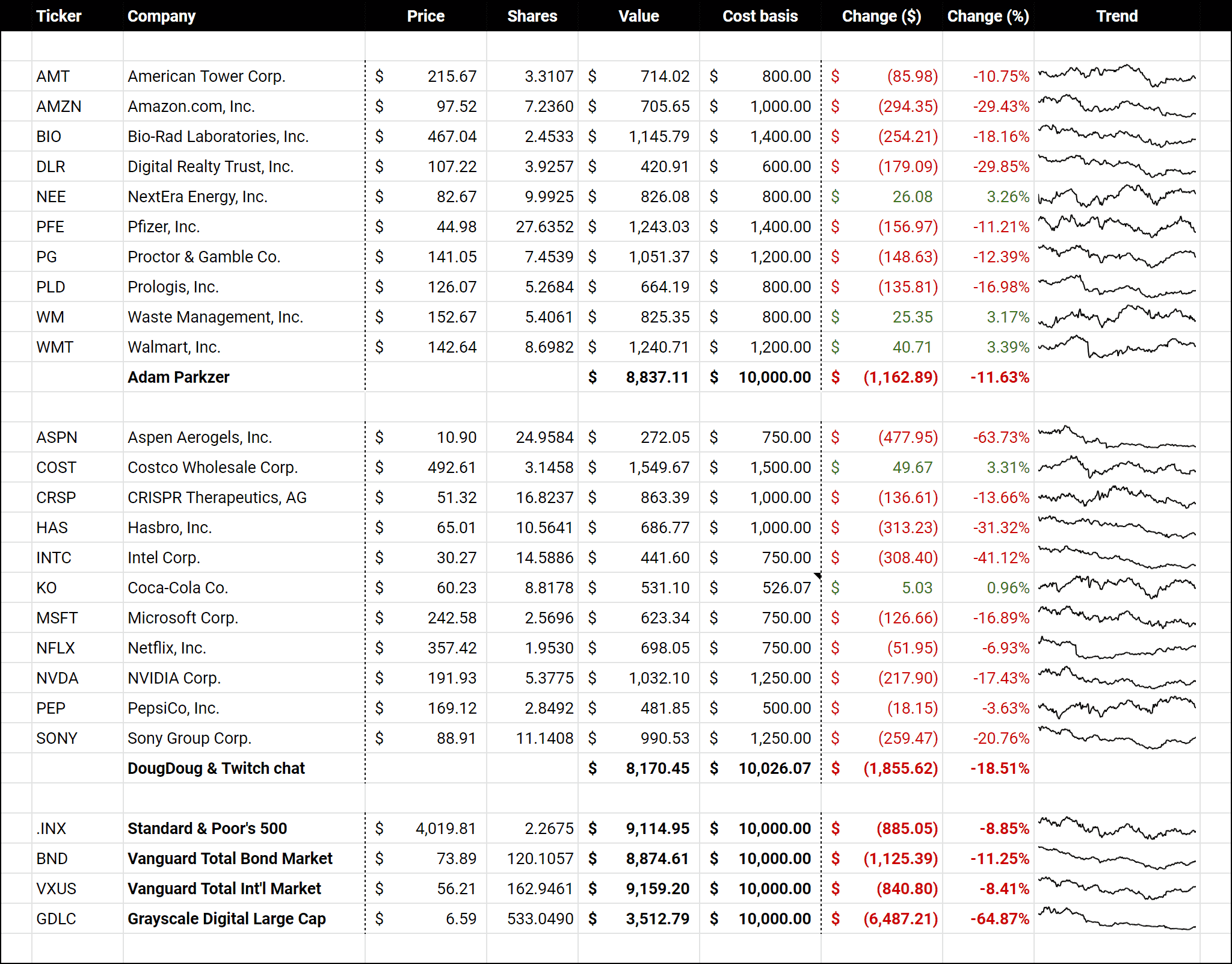 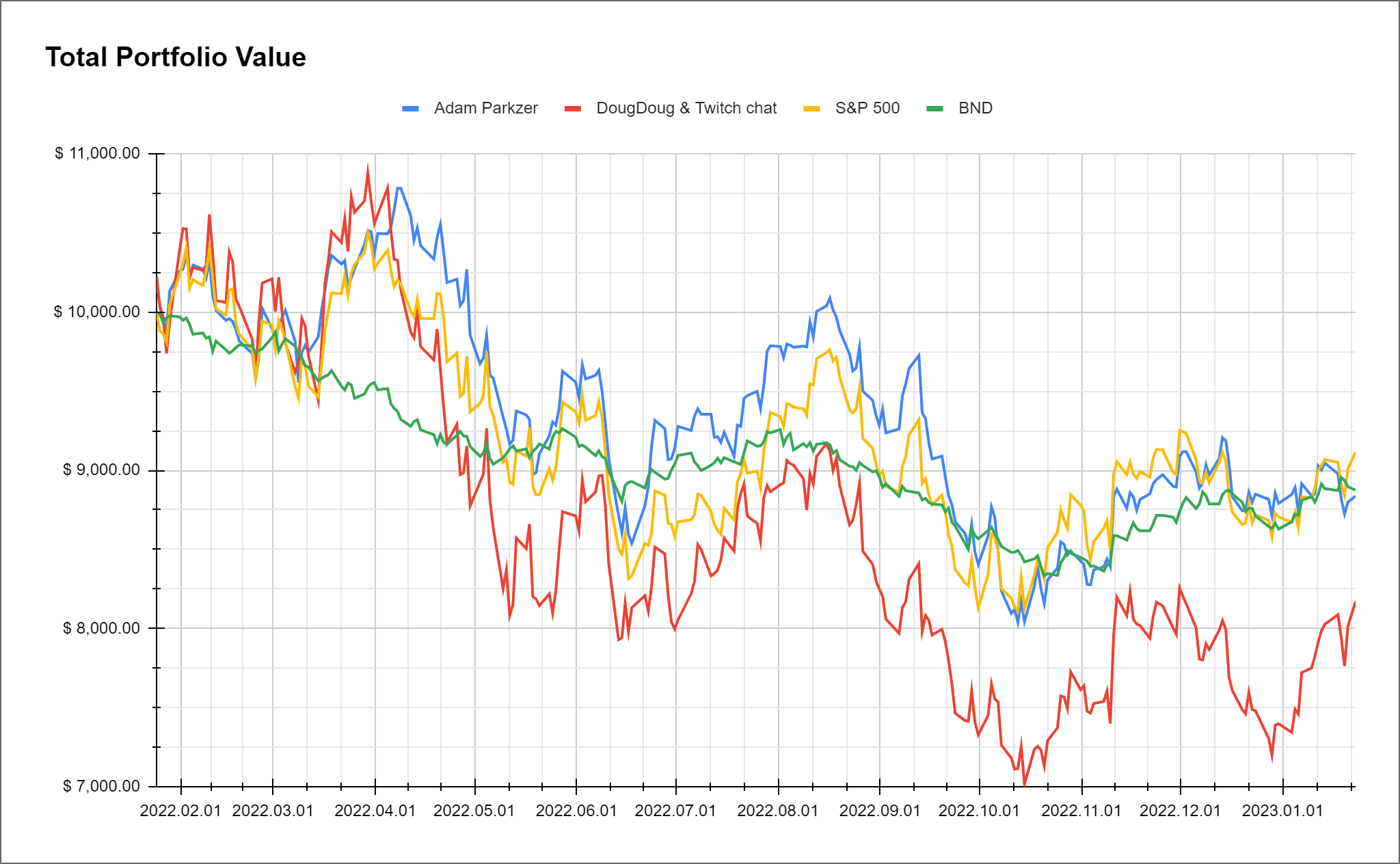 (Apologies to those who are visually impaired and/or use screen readers; the content of those tables and charts is just too large and graphically-intensive to be able to reasonably translate into HTML. Hopefully the summary below helps you get a better idea of the information provided. All further tables on this page are hard-coded into the document.)

As a reminder, my portfolio was designed not to win harder, but to lose slower (as opposed to Doug’s, which, whether or not he intended it, was de­signed to win harder at the cost of also losing harder). This strategy worked, as the overall markets did not have the best year in 2022.

My portfolio’s winners were NextEra Energy, Inc.; Waste Management, Inc.; and Walmart, Inc. My portfolio’s biggest losers were Digital Realty Trust, Inc. and, funny enough, Amazon.com, Inc. Amazon was my effort to “diversify” by adding in a wildcard company outside of my designated sector strategy (more on this later); if I had just committed to my strategy, my portfolio would have done even better.

On the other hand, Doug’s portfolio’s winners were Costco Wholesale Corp., Coca-Cola Co., and to some extent, PepsiCo, Inc. Doug’s portfolio’s biggest los­ers were Aspen Aerogels, Inc.; Intel Corp.; and Hasbro, Inc. Throughout a majority of the year-long challenge period, Netflix, Inc. was performing hor­ri­bly, but it was starting to pick back up recently; it’s unfortunate that the timing of the stock challenge was such that it didn’t have an opportunity to ful­ly recover.

If it’s any consolation, we should be happy that we did not put all our money into cryptocurrency. The Grayscale Digital Large Cap Fund, which is com­posed (as of today) of Bitcoin, Ethereum, Solana, Polygon, and Cardano, fell almost 65% in value.

It is widely accepted that it is impossible to consistently and intentionally predict the stock market, and those who have managed to do so have just got­ten lucky. However, what isn’t impossible is to take current events into consideration and make broad generalizations about what is more likely to hap­pen in the stock market during that generalization period.

From there, I decided that, out of the market sectors defined by the Global Industry Classification Standard (GICS), I wanted to focus on consumer sta­ples, health care, utilities, and real estate. Were those indeed the best sectors? Here are the results:

*For the purposes of this table, I used Vanguard sector ETFs to gauge each sector’s performance. I selected Vanguard simply because I personally use it as my primary brokerage and I am most comfortable working with their offerings. There are many other options available, and the results may vary de­pend­ing on which one you pick.

Energy was a wildcard that spiked from the Russo-Ukrainian War and its escalation as a result of the 2022 Russian invasion of Ukraine. With that ex­clud­ed, it seemed like my predictions were generally correct—although real estate underperformed, the other three sectors I picked outperformed the to­tal stock market, and if I average out all four, I would be ahead of the total stock market by $543.97.

Remember, though, that my ten individual company picks did not beat the total stock market by that amount, or at all. That further emphasizes how much of a risk it can be to invest in individual companies instead of broad indexes, as well as how basing your investment decisions even on something as seemingly reliable as stock market sectors could still end up leading you astray.

The Coca-Cola vs. Pepsi mini-game

Doug’s community is split in half into two teams based on the letter with which each person’s Twitch username begins—”A Crew” for the first half of the alphabet and “Z Crew” for the last half of the alphabet. As a mini-game between the two “crews,” Doug invested $500 into Coca-Cola to represent A Crew and $500 into Pepsi to represent Z Crew, and whichever stock ends with a higher balance would determine which crew wins.

Unfortunately, Doug made a common mistake of confusing Coca-Cola Bottling Co. Con­sol­i­dat­ed (COKE) with Coca-Cola Co. (KO), so he ended up investing A Crew’s $500 into the wrong company. I flagged this for Doug so he could fix his mistake, but not before he re­al­ized $26.07 in prof­its from COKE from the first trading day. Before I could make the prop­er cal­cu­la­tions to see how much of that gain should carry over, he put the en­tire $526.07 in­to KO.

Thus, the A Crew vs. Z Crew situation becomes a bit more complicated. Instead of just look­ing at Doug’s portfolio to see who won, we have to do some math to find out what his bal­ance of KO would have been had he invested the $500 properly from the beginning.

After performing that calculation using historical data and running a market simulation ag­ing that portfolio by one year, we have A Crew’s Coca-Cola Co. finishing with $502.25 and Z Crew’s PepsiCo, Inc. fin­ish­ing with $481.85, thus making A Crew the winner of the mini-game by a mar­gin of $20.40.

One of the stipulations of this challenge was that we would have to donate any earnings beyond our $10,000 cost basis to charity. Unfortunately, both of our portfolios lost money, so there were no profits this time around.

Another stipulation was that the loser of the challenge (i.e., the person with the lower portfolio balance) would have to do a punishment. If I were to lose to Doug and his Twitch chat, it was suggested that I would have to get a phrase of Twitch chat’s choosing laser engraved onto my Glock 19 pistol. I ac­tu­al­ly don’t recall explicitly agreeing to this, but thankfully, it doesn’t matter, because I won.

Doug’s punishment, on the other hand… was undecided. I imagine it is going to be determined through a voting process with Twitch chat during an up­com­ing live stream. I also trust that whatever is selected as his punishment is of comparable severity as me potentially having some random Twitch meme permanently immortalized on my duty weapon.

I had fun with this stock investing challenge, and I’m glad I was able to participate. I think many people just expected all along for me to win, but in reality, there were plenty of opportunities for Doug’s portfolio to come out ahead.

I’d be happy to participate in something like this again in the future. But until then? I’m sure you already know… I’m selling everything tomorrow and putting it in the S&P 500.