Apart from its wine, another thing that the Tri-Cities area is known for (at least for tourists) is Richland’s involvement in the Manhattan Project via the Han­ford Site. While in the area, I decided to book a tour of the B Reactor to learn more about the nuclear bombs used in World War II.

Surprisingly, the tour was free. I showed up at the visitor center at my designated tour time slot and was greeted by a docent who showed us an in­tro­duc­to­ry video and walked through some of the rules with us. Afterwards, the group and I loaded onto a bus (a nicer one with individual chairs in a 2-2 seating configuration, and not bench seats like a school bus) and took a 45-minute ride to the B Reactor. 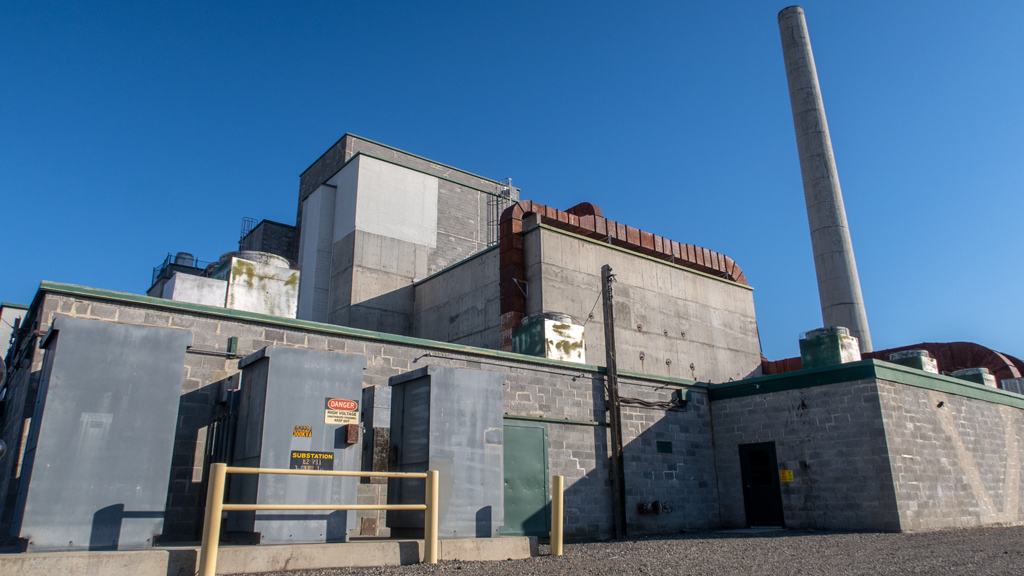 Upon arrival, we were taken directly to the actual reactor. 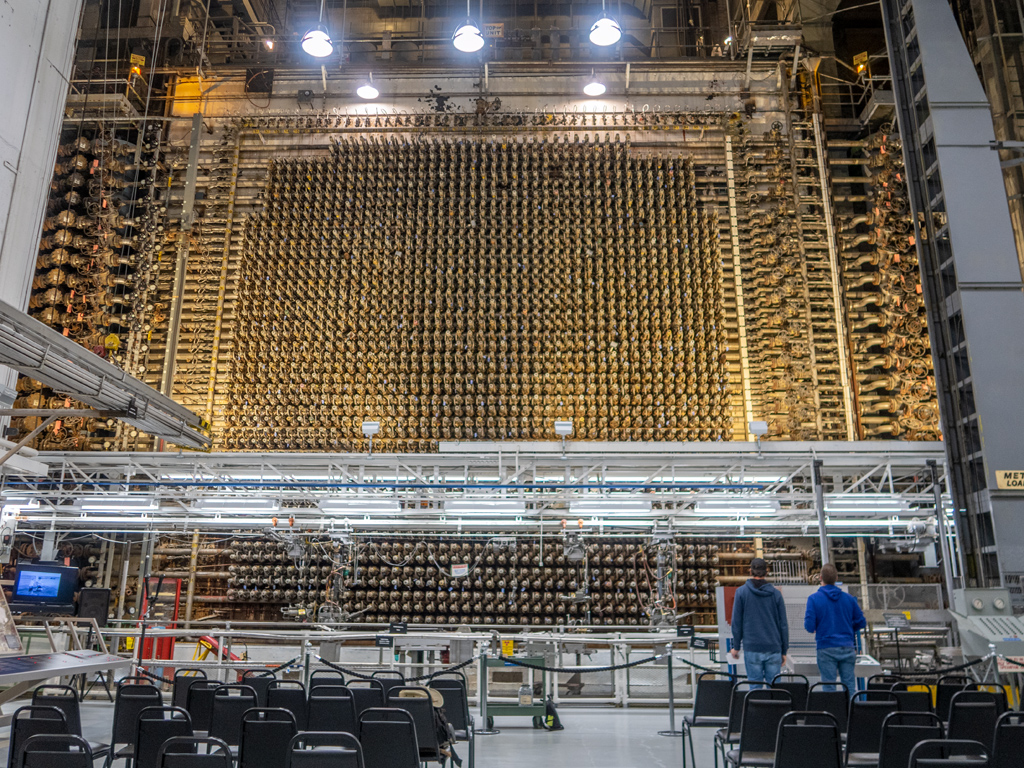 After everyone got seated, another docent gave us a brief overview of the Manhattan Project and explained the logistics how the reactor worked and what steps the staff had to take to remain safe from radiation. 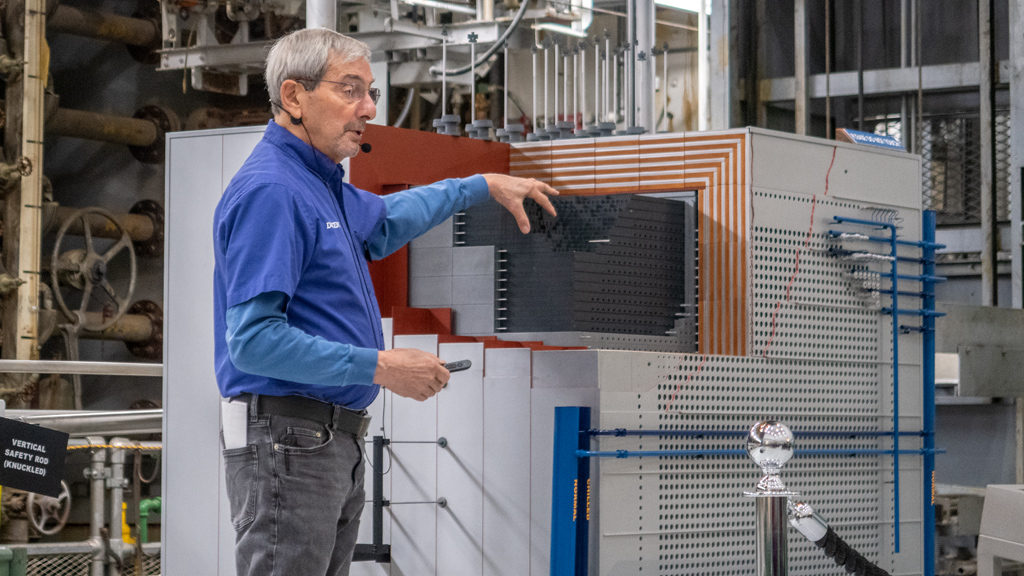 If I remember correctly, the docent informed us that there were 2,004 process tubes in the reactor. At first, the plan was to build it with only about a thousand, but on the advice of some engineers, the number of tubes was increased as a safety measure. This ended up being a very wise decision, as there were some unexpected chemical imbalances in the reactor that required more fuel to be inserted, so the excess process tubes were immediately put to good use upon operation. 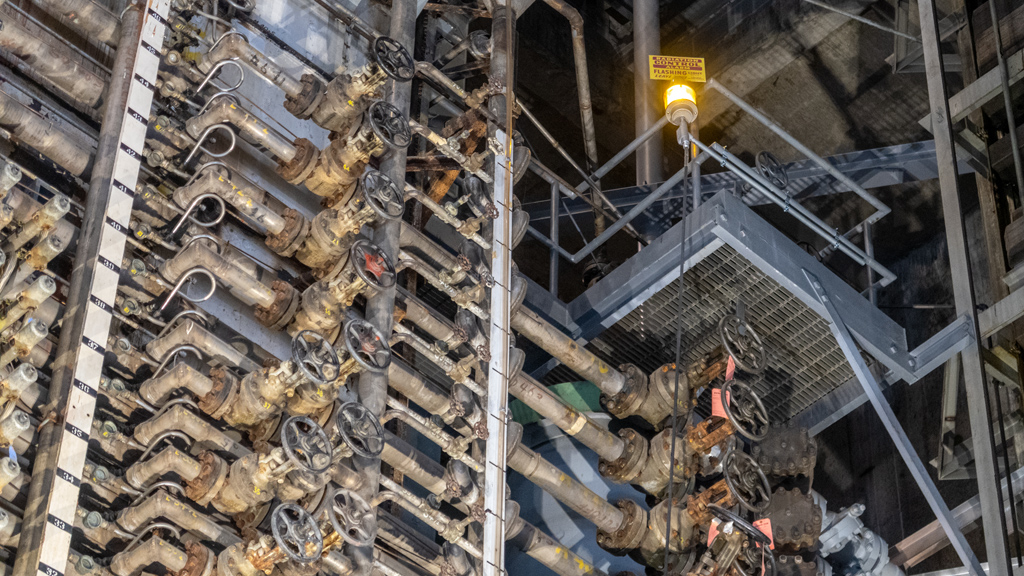 Displayed on some tables nearby the reactor were some equipment and accessories that were used during the operation of the reactor. For example, there were some fuel tubes that were inserted into the reactor, off-set between two spacer tubes each. 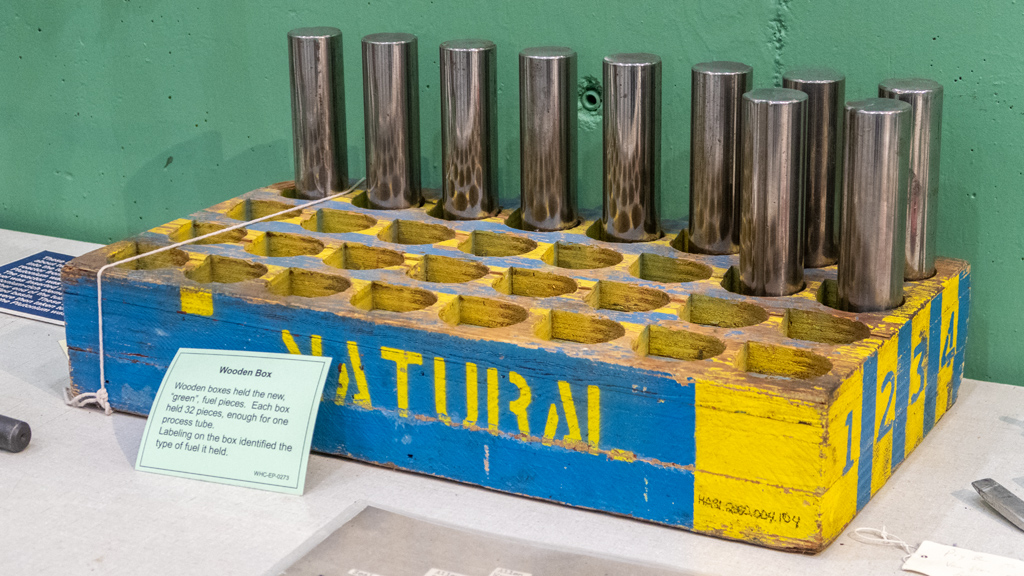 Around the corner was the exhaust fan hallway, which contained four exhaust fans—two steam-powered and two electric. 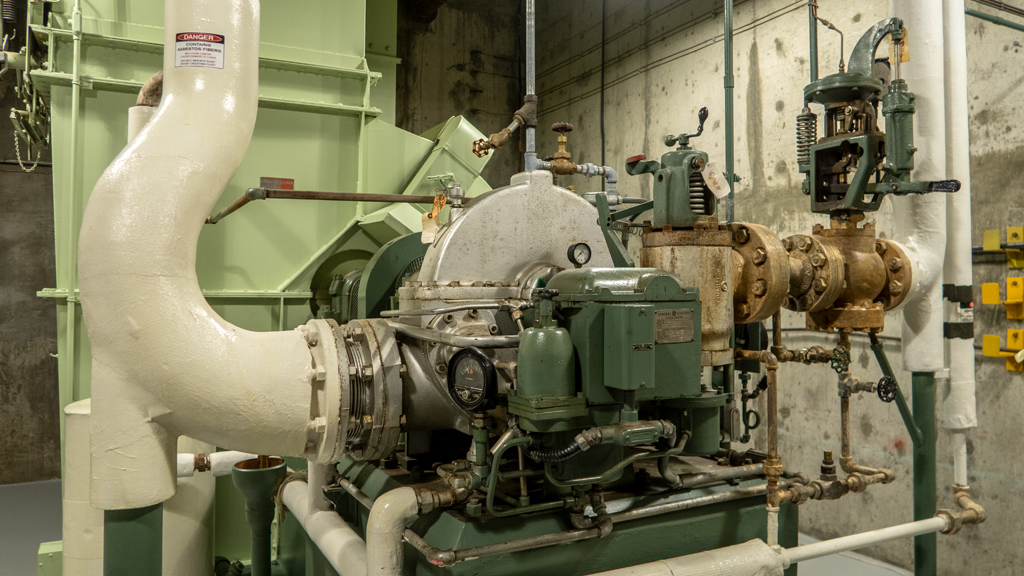 Originally, this hallway was split into individual “pods” for each of the fans, and the only way to get from one room to the other was around a curvy bend—the architecture was constructed this way because the radiation traveled in straight lines, so if one of the fans were to malfunction, the radiation could be contained in one of the rooms. Since then, archways were excavated into the concrete walls to create the hallway. 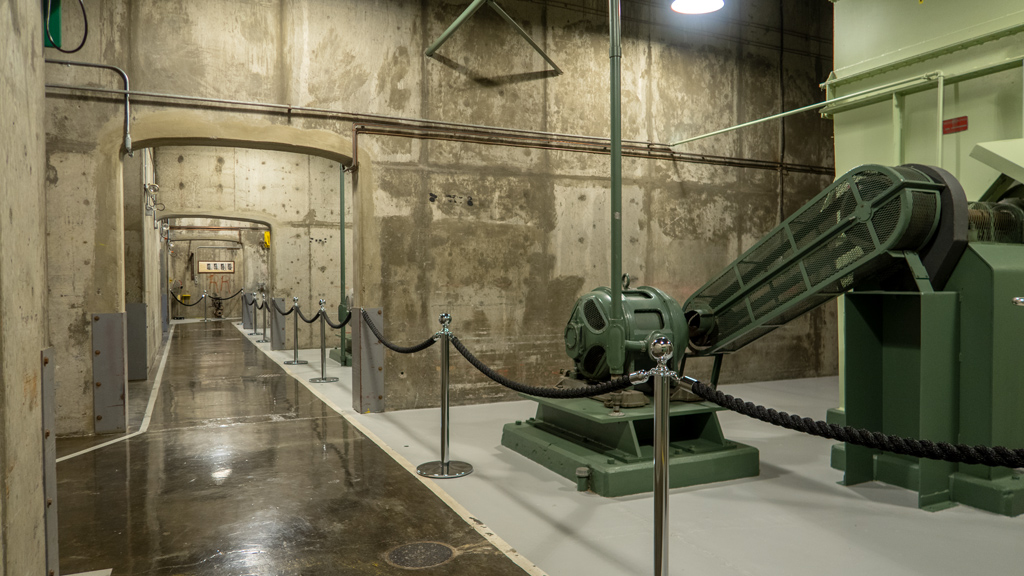 Next, I visited the valve pit, which was responsible for passing treated water through process tubes. The docent had a small presentation in this area, and he explained that, until not too long ago, this room was annually audited as part of a peace agreement. The way the room would be checked to ensure the facility was no longer operational was to verify that the tubes did not show signs of having been recently wet. 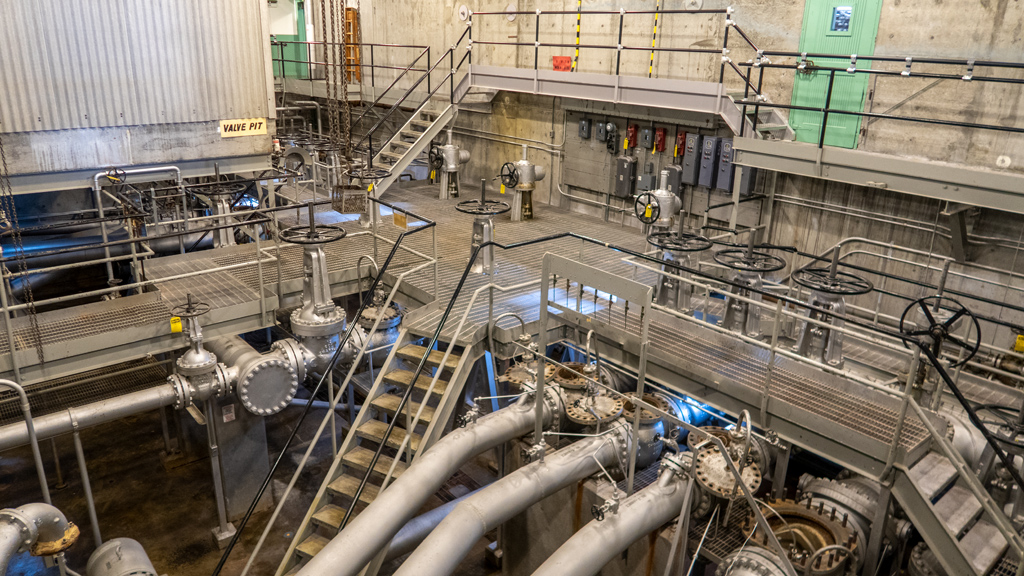 I don’t quite recall exactly where this photo was from; I believe it might have been from a hallway near the electric equipment room. 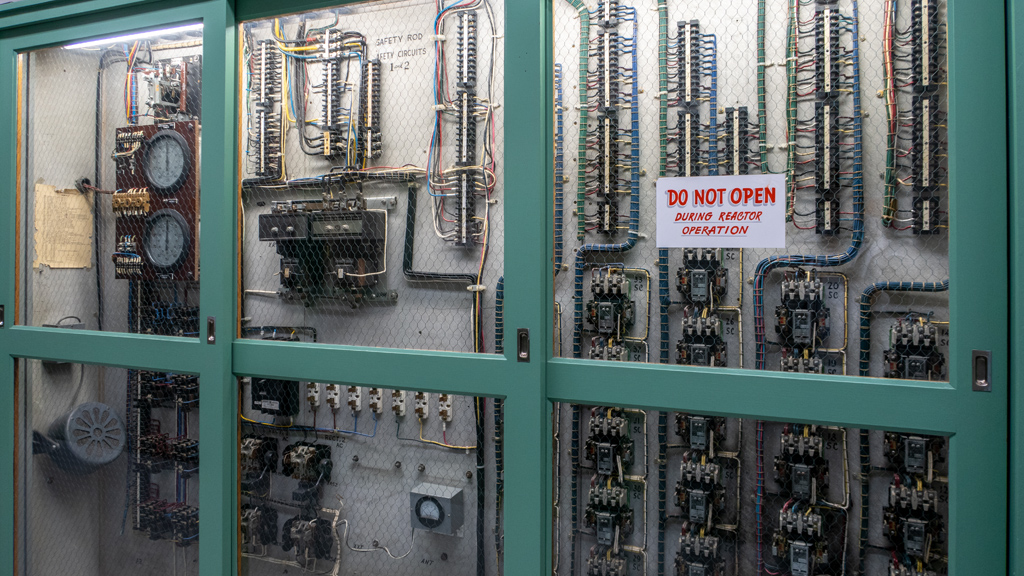 Around the corner was the accumulator room, which contained, as you may have guessed, accumulators. They served as a back-up system for inserting hor­i­zon­tal control rods into the reactor in the event of a power failure. There was a mirror between the accumulators that was strategically angled so you could see the inside of the accumulators from the ground; they contained a lot of small rocks. 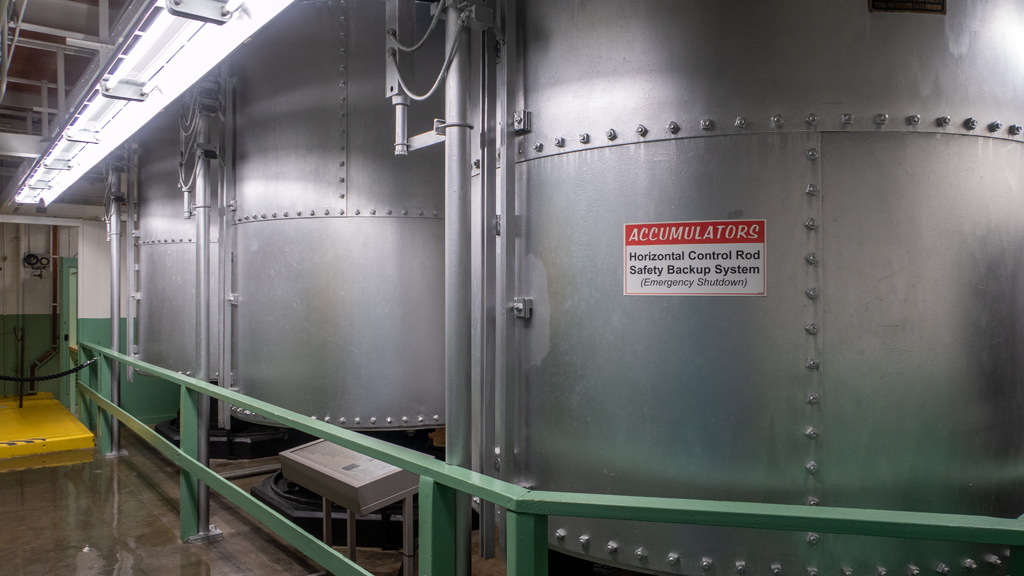 This was one of the unlabeled rooms right outside the accumulator room, which appeared to have some telecommunications equipment, tools, and in­stru­ments on display. 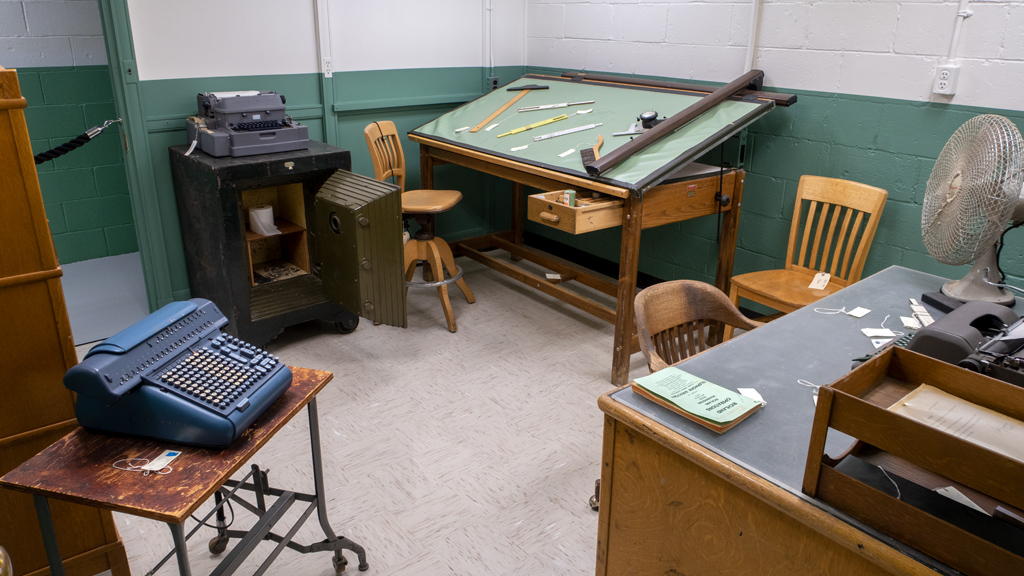 I eventually made my way over to the secondary “main attraction” (behind the reactor itself), which was the control room. 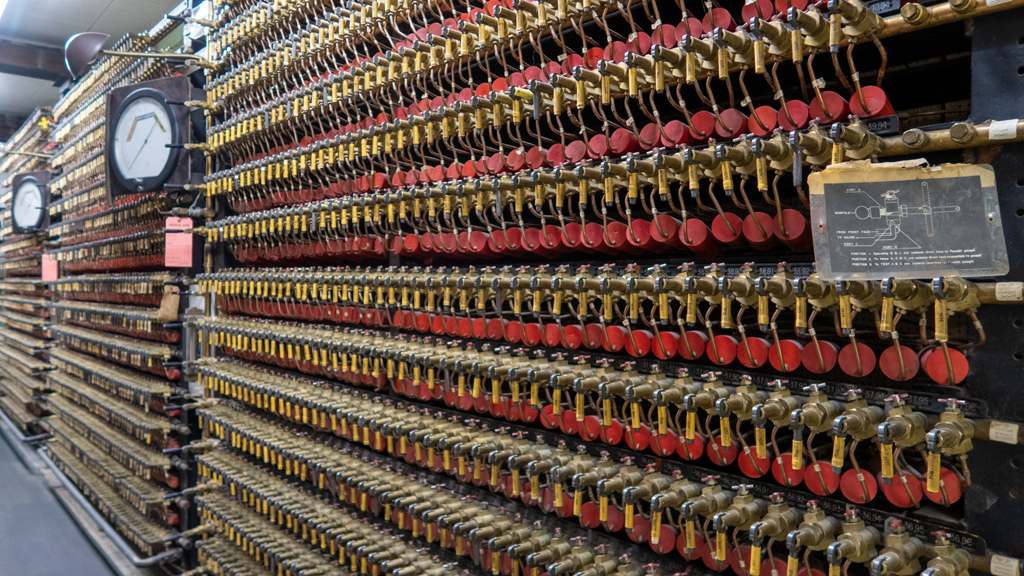 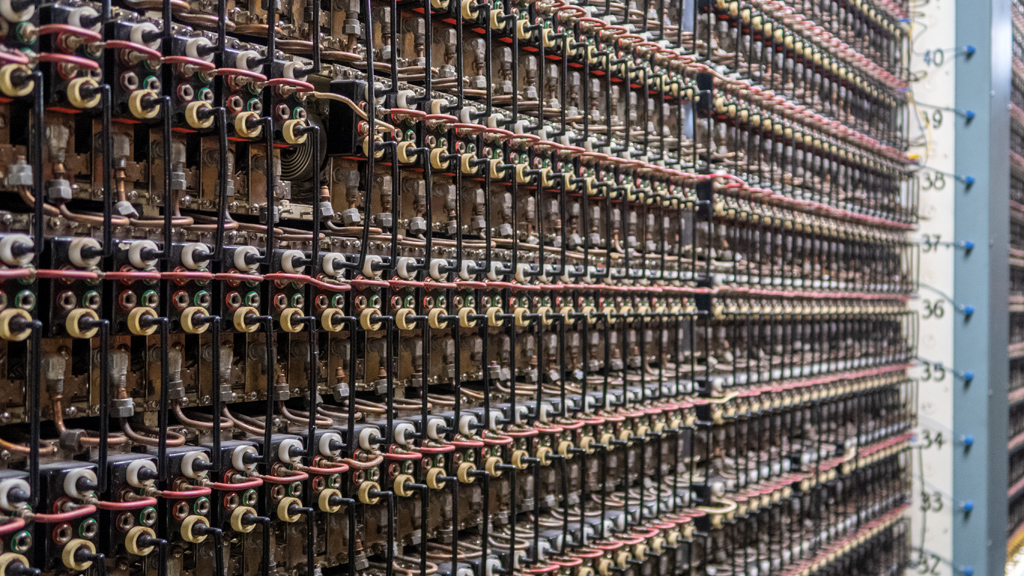 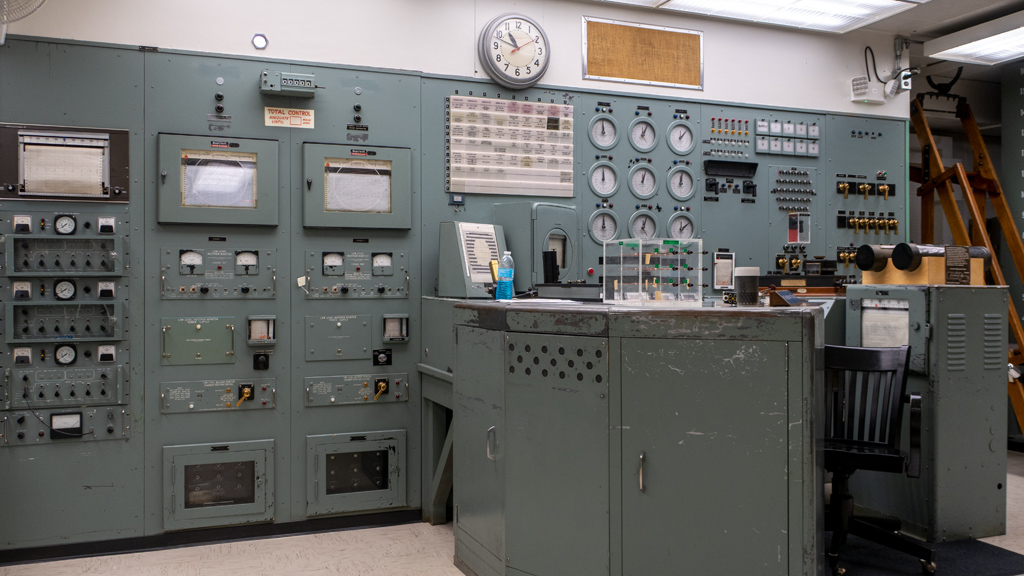 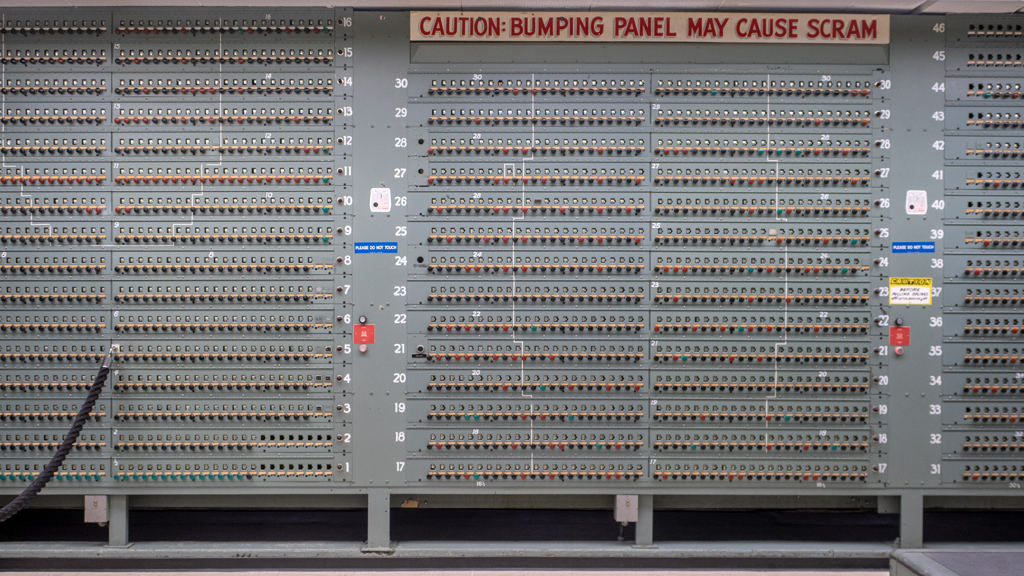 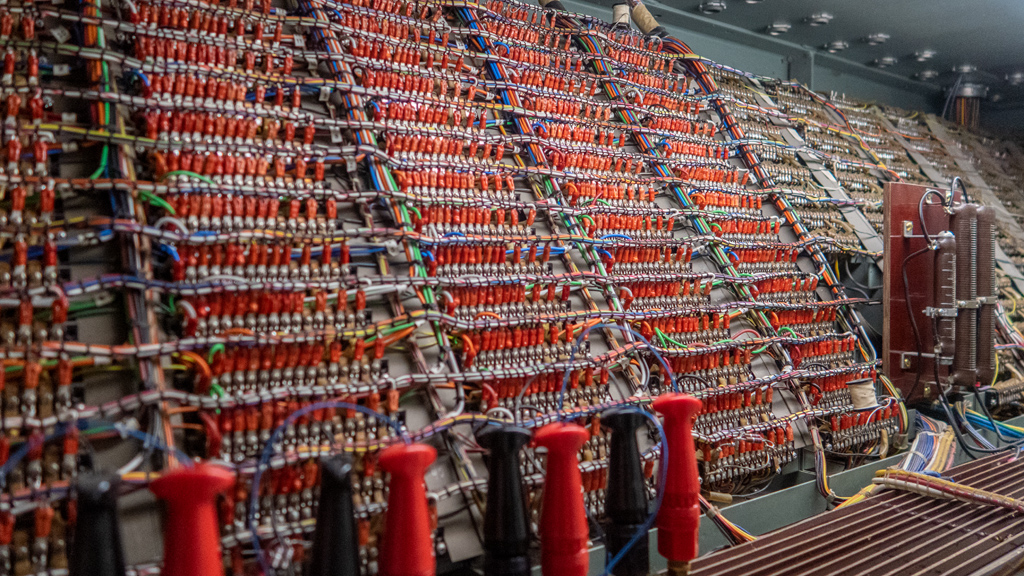 After thoroughly exploring the control room, I continued my way down the hallway to the fuel storage basin. This area was blocked from public access due to contamination, but there was a viewing area behind some thick glass where we could see where irradiated fuel was stored prior to being shipped to the 200 Area, also known as the Central Plateau. 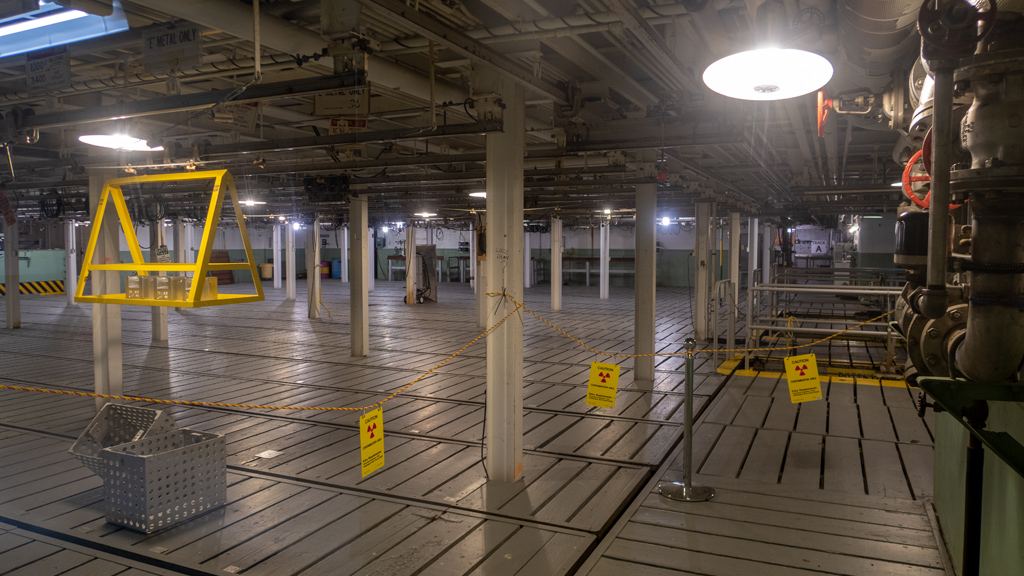 Outside, there was a train on display. The docent did not specify what this was for, but just from the fact that it is on display at the B Reactor, I imagine this was one of the trains used to transport fuel and materials to and from the reactor. 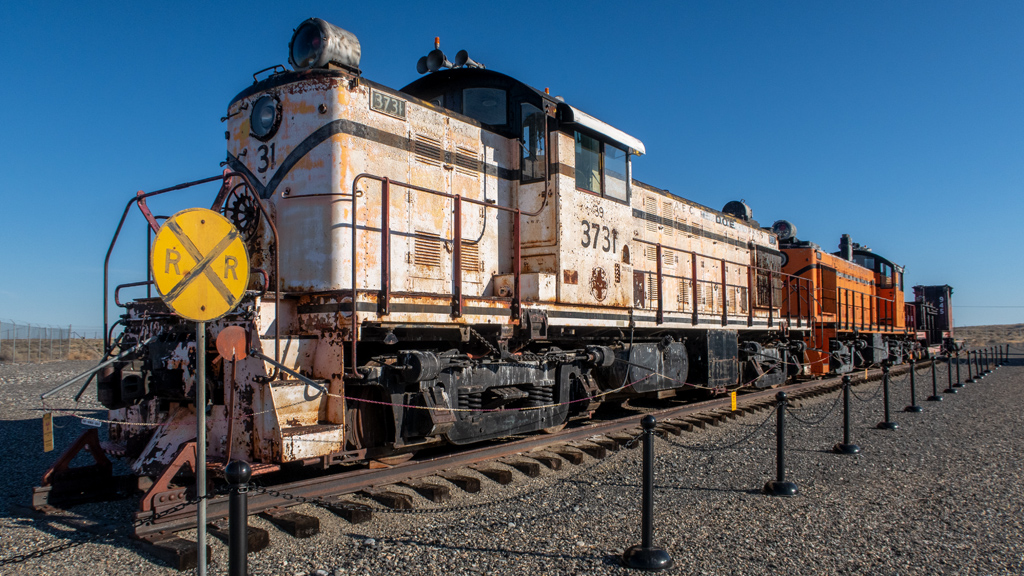 I talked about this more in-depth in previous blog posts when I started visiting museums a lot more a year and a half ago when I completed the first por­tion of my road trip, but museums like this have played a very large role in lessening my dislike of the topic of history. Throughout all my academic years as a student, history was my most hated subject because the way it is taught in the United States is passive and makes everything appear in­con­se­quen­tial.

Now that I’m actually seeing this all first-hand, I’m able to conceptualize and internalize what happened. Additionally, the docents here were former employees of the Manhattan Project at Hanford, they are lifelong residents of the Tri-Cities area, they are still taking an active role in the clean-up proc­ess, and it’s clear that they truly care about helping people understand the importance of this history.

These docents demonstrated a stark difference from the history teachers I had, especially in high school, where it was a recurring theme for them to just lecture at me out of a textbook. They only cared about the process (i.e., saying that they showed up for class so they can collect their paycheck), rather than caring about the results when it came to the students.

I thought this tour of the B Reactor was amazing, and I am astonished that it was free. Based on quality and the resources they have to put in for trans­por­ta­tion and staffing, they could justify charging ~US$30 for this, and even then, it would still be an amazing deal.

I think the timeframe allotted for self-exploration was a little short, and it was mainly geared towards the casual visitor. If you are an enthusiast or end up getting very interested in the topic, this is absolutely a tour worth attending twice.