Disclaimer: I am not an investment advisor, and the information contained in this post is not intended to be construed as financial advice. This is simply an anecdotal report of a personal project and does not imply that you should copy my strategy. Past performance is not a guarantee of future re­sults. Con­sult a certified professional if you need guidance with your own financial strategy.

Today marks the exact four-month point since starting the US$10,000.00 stock market investment challenge with Doug Wreden and his Twitch chat.

If you’re not up-to-date and don’t feel like reading the previous blog post for all the details, here’s a summary:

With all that out of the way, here is how our portfolios are doing: 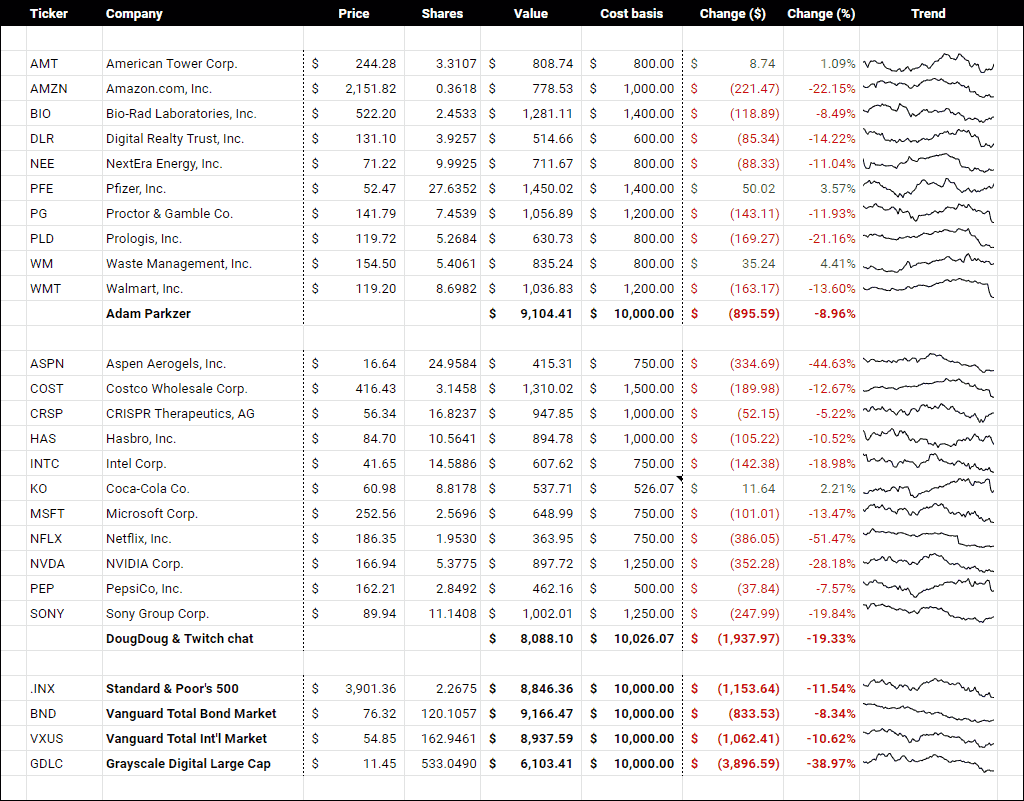 My portfolio is generally hanging in there, with Pfizer and Waste Management being the biggest winners. Walmart had also been doing ex­treme­ly well, but as you can see from the sparkline, it recently tanked after they (and Target Corp.) announced that their first-quarter earnings were worse than ex­pected.

Doug, on the other hand, is going through a very rough patch in his portfolio. He had actually been doing well at first, but with Netflix committing com­mer­cial suicide and the general sell-off of technology stocks, things are not looking good for him.

I’m also tracking a few benchmarks to see how our portfolios would have been doing had we invested them in the broad stock market instead of picking our own individual stocks. My hedge-against-recession portfolio has actually been doing pretty well com­pared to the S&P 500, having consistently been higher than it over the past two months and beating it by $258.05 as of today. However, Doug is falling fairly far behind, at $758.26 in the negative com­pared to if he had just bought the S&P 500.

Bonds are generally considered a safe investment, but even bonds are dropping in price. I personally use Vanguard Total Bond Market Index Fund Ad­mi­ral Shares (VBTLX) in my main investment portfolio, so I decided to use the ETF version BND as the benchmark. If Doug and I had invested in bonds instead of companies, Doug would have $1,078.37 more in his portfolio, while I would have only $62.06 more.

Investing internationally is another common way to diversify a portfolio, and I personally own a large chunk of Vanguard Total International Stock In­dex Fund Ad­mi­ral Shares (VTIAX) in my investment portfolio, so I used the ETF version VXUS as our benchmark. If Doug and I had decided to go broad market international instead of investing domestically, Doug would have $849.49 more in his portfolio, while I would be down $166.82.

And finally, to keep things interesting, I also decided to do a benchmark with cryptocurrency. I selected the Grayscale Digital Large Cap Fund (GDLC), not only because I already personally own it in my regular investment portfolio, but also because it is a way to be able to track the health of the broader cryp­to market, as opposed to looking at just a single coin. As of today, the holdings of GDLC include about 65% Bitcoin; about 27% Ethereum; less than 2% each of Solana, Cardano, and Polakdot; and less than 1% each of Uniswap, Chainlink, Avalanche, Litecoin, and Bitcoin Cash. If Doug and I had taken a risk and put that $10k into crypto instead, Doug would be down $1,984.69 more, while I would be down $3,001.00 more. 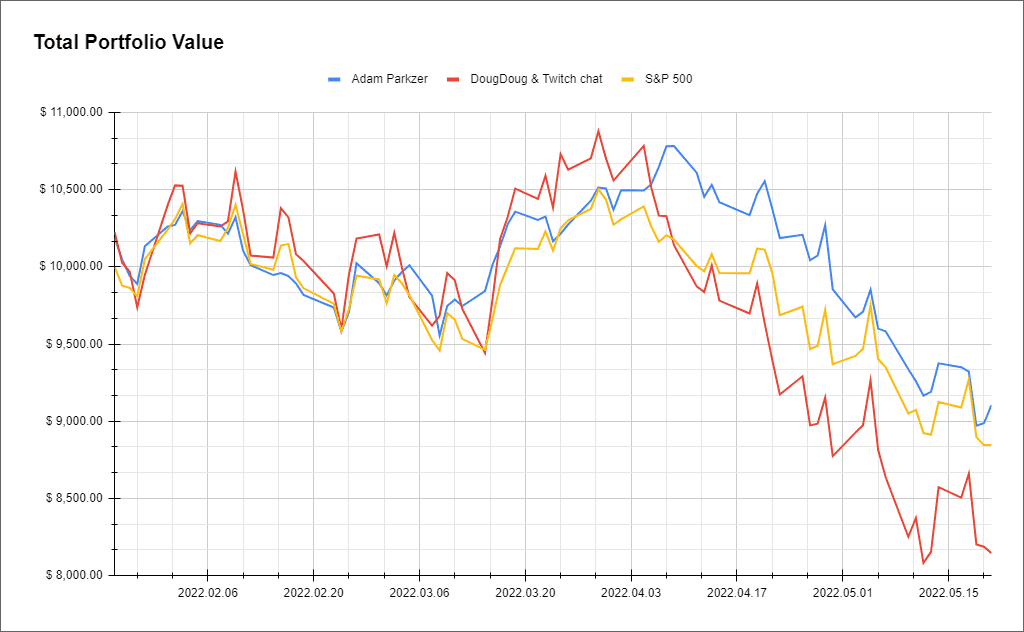 If you haven’t noticed yet, I switched the platform I use to track our stocks—I wasn’t fully satisfied with the features of my previous platform, so I de­cid­ed to make my own using Google Sheets and Google Finance instead. Quotes from Google Finance can be up to 20 minutes behind, so it’s not vi­a­ble to use for active trading, but for my purposes of wanting full customizability and the non-urgency of price updates, it works perfectly due to its in­te­gra­tion with Google Sheets.

One of the features I was hoping for previously was to be able to chart our actual portfolio values over time, as opposed to only being able to chart per­cent changes; I made my own chart that sources from a table of the entire daily history of our portfolios, so now you can see the actual dollar a­mounts as the days progress.

My portfolio actually hadn’t been that stellar for a decent chunk of time, but you can see the point in early April at which I pull ahead and everything starts plummeting. Just like how it suddenly changed then, there is just as likely of a chance that it can suddenly change again in the future in the op­po­site direction. We’re still 8 months away from the end of the competition, and that’s a long time for unexpected things to happen, so I’m not getting too complacent.

In the meantime, I still think it’s pretty fun to keep tabs on our progress so we can will a higher power to move the stock market towards the favor of our own portfolio.