Of course, a trip to Rapid City, South Dakota wouldn’t be complete without a visit to Mount Rushmore National Memorial… at least that’s what you’re supposed to think, based on how popular it is. So, for one of my Rapid City tourist activities, I drove my way up into the Black Hills National Forest to see the faces of four of our past presidents carved in stone. 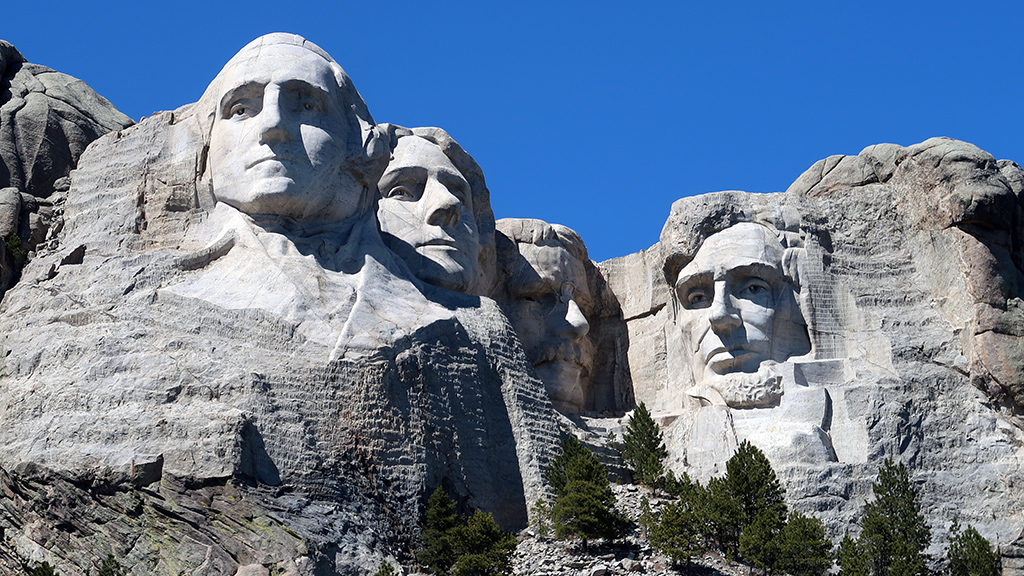 And that’s it. George Washington, Thomas Jefferson, Theodore Roosevelt, and Abraham Lincoln. You can’t really get much closer than how close I got for that photo, and that’s with my point-and-shoot camera zoomed in all the way. Washington is prominently visible and Lincoln is pret­ty clear, but Jef­fer­son is sometimes obscured, and Roosevelt is practically only visible from certain angles.

The path up to Mount Rushmore was nicely decorated with all the flags of the 50 states, as well as a few of the territories. 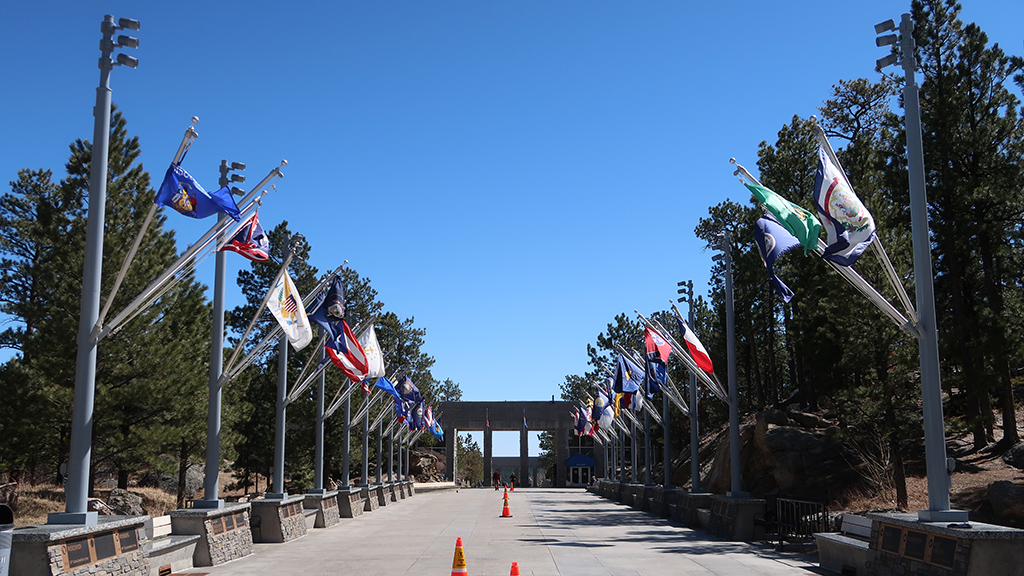 At the end of the path was the entrance to the museum and the auditorium. The museum wasn’t particularly large, and it was pretty text-heavy, but there were some exhibits showing smaller models of the stone and how the stone is most effectively carved at that height and at that kind of scale. 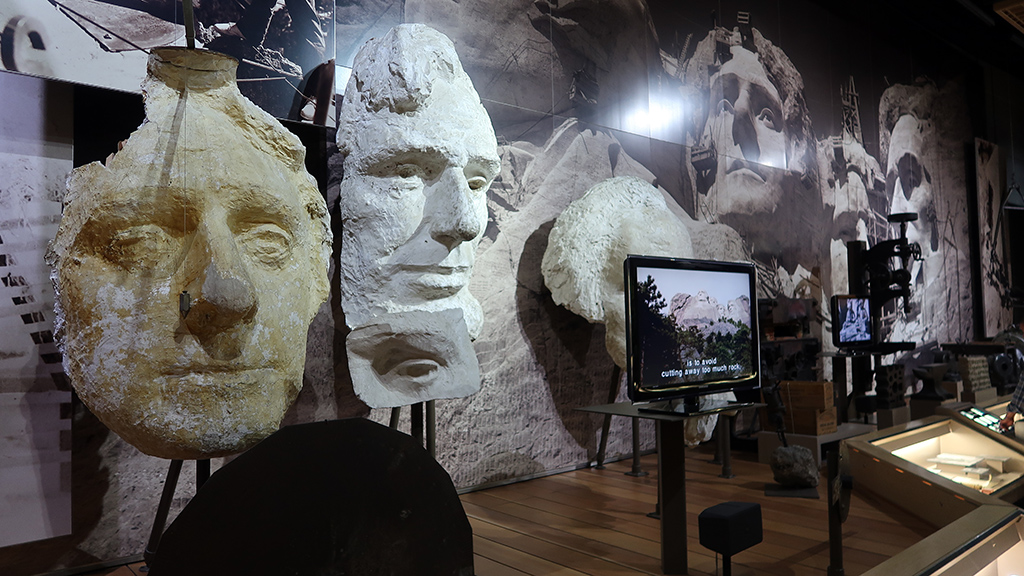 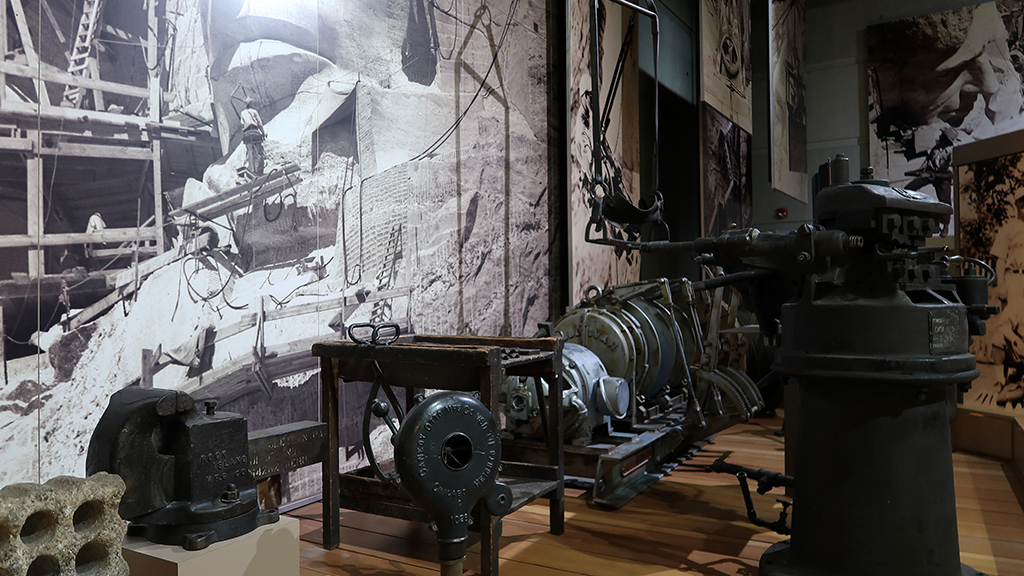 Apart from that, there was a short hiking trail around the area, and that was about it. The trail was called the Presidential Trail, and it had a lot of places where you could stop to read about the different presidents and look at Mount Rushmore from various different angles. One of them allowed you to walk into a cave-like structure and peep at Washington through some rocks. 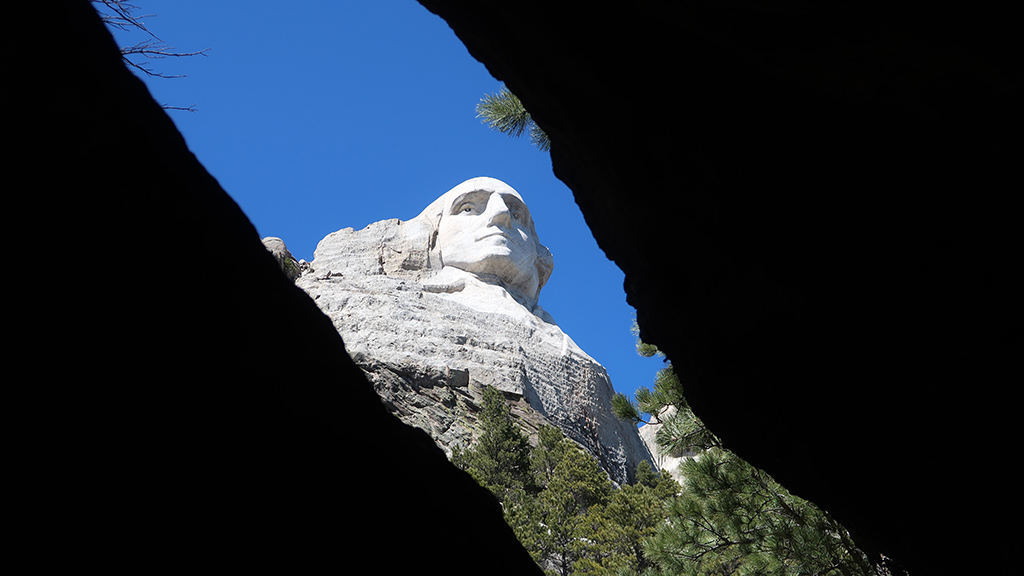 Partway down the trail, there was a nice view back towards the entrance where you could see the flag display, entrance to the museum, and seating for the auditorium. 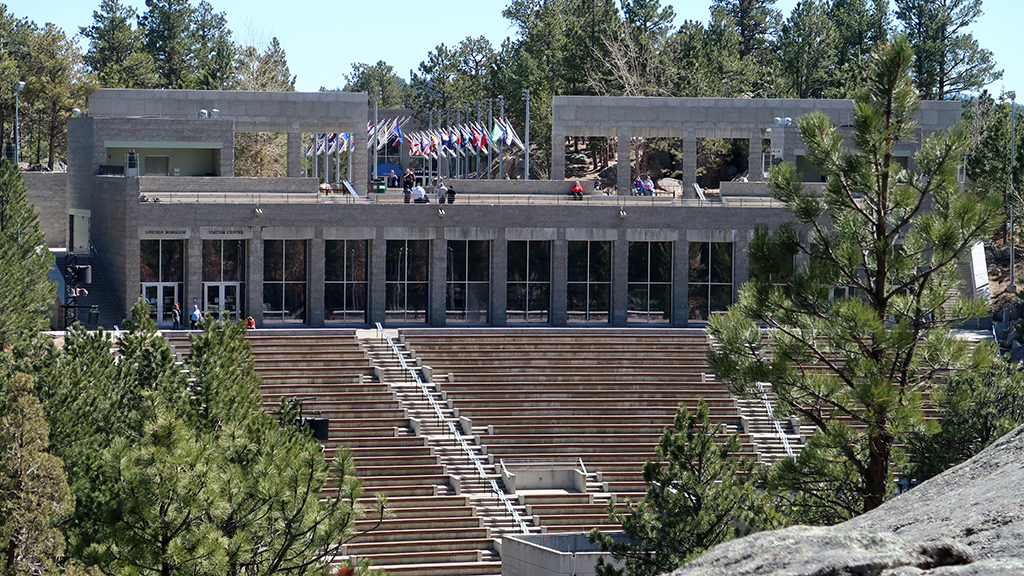 Further down the path was the Sculptor’s Studio, which was unfortunately closed due to being off-season. From there, I took the scenic route back to the park­ing lot. 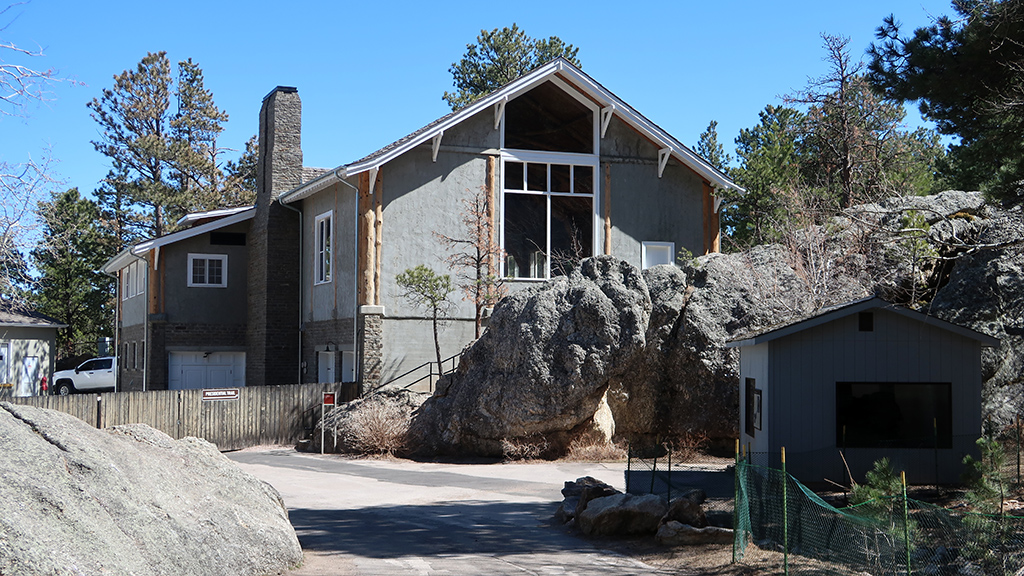 I think for someone who is a huge Mount Rushmore enthusiast, you can get through everything there is to see (including all the museum exhibits and the videos that play in the miniature theater) in about 2-3 hours at most. I personally took about an hour and a half starting from when I entered the park­ing garage to when I got back to my truck.

This is definitely one of those places where you would go just so you can say that you’ve been there before, but isn’t something majestic or breath­tak­ingly stunning like some other national parks or national monuments. I think the most impressive thing about Mount Rushmore is just the fact that a man decided to carve gigantic faces into the side of a mountain, and then pulled it off.

One thing to note for America the Beautiful Annual Pass holders is that admission to Mount Rushmore is still going to cost you US$12.00. They man­age to get away with doing that because they charge that amount for using the parking garage, not for actual admission to the memorial. This means that, if you walk to Mount Rushmore, you could get in for free… but that isn’t exactly a viable thing to do, considering Mount Rushmore is fairly deep into the mountains, and there are no other free parking areas from which you can safely walk to the memorial.

Being a little disappointed at how quickly that went, I decided to continue westbound on South Dakota Highway 244 and came across a little parking area where I could take a photograph of the profile view of Washington. 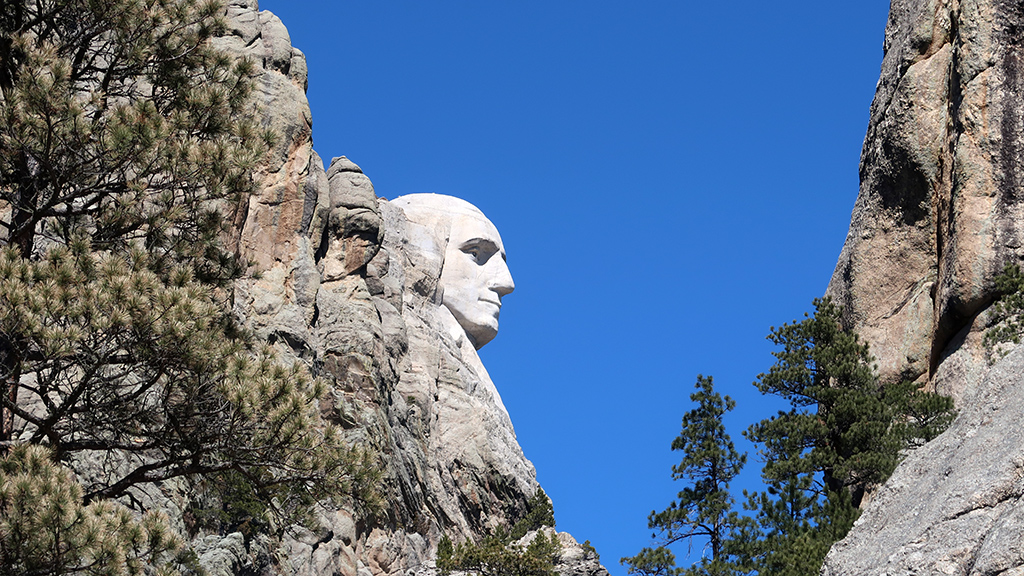 Continuing even further westbound led me to an intersection with a dirt road that takes you to Horse Thief Lake. There was nobody else around, so this was an amazing opportunity to take in the view, enjoy the tranquility of the water, and watch squirrels scurry around up and down the rocks. 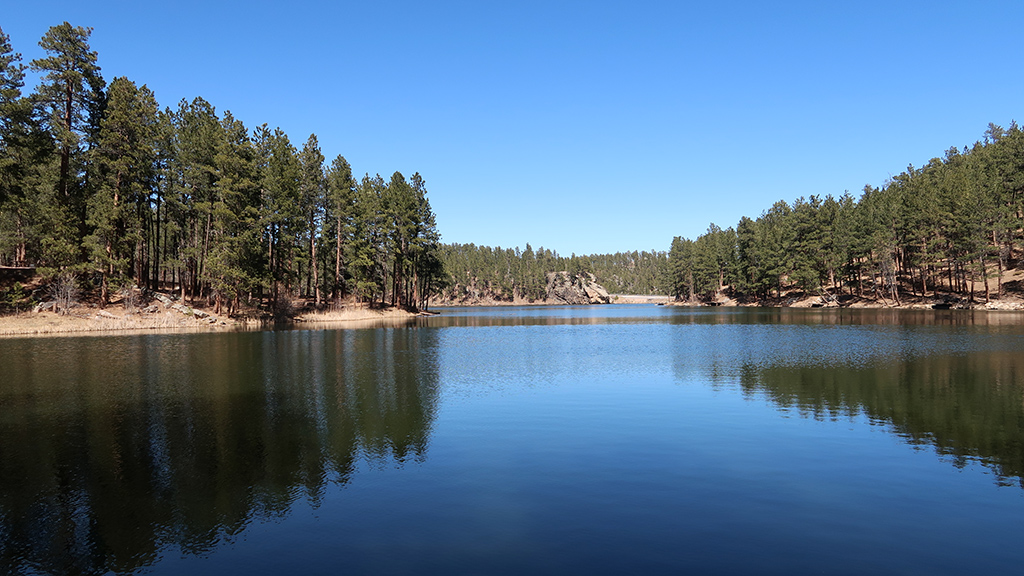 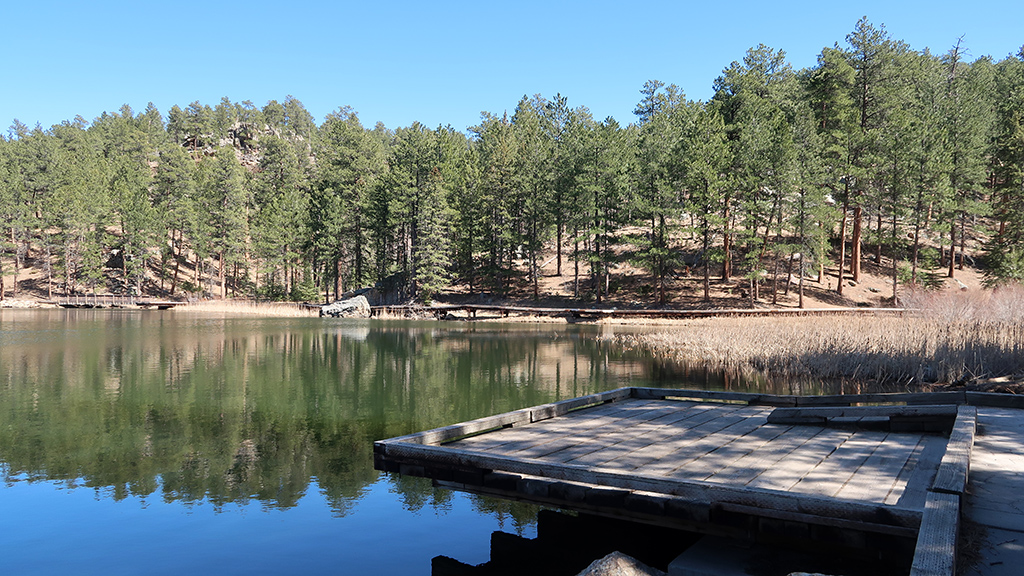 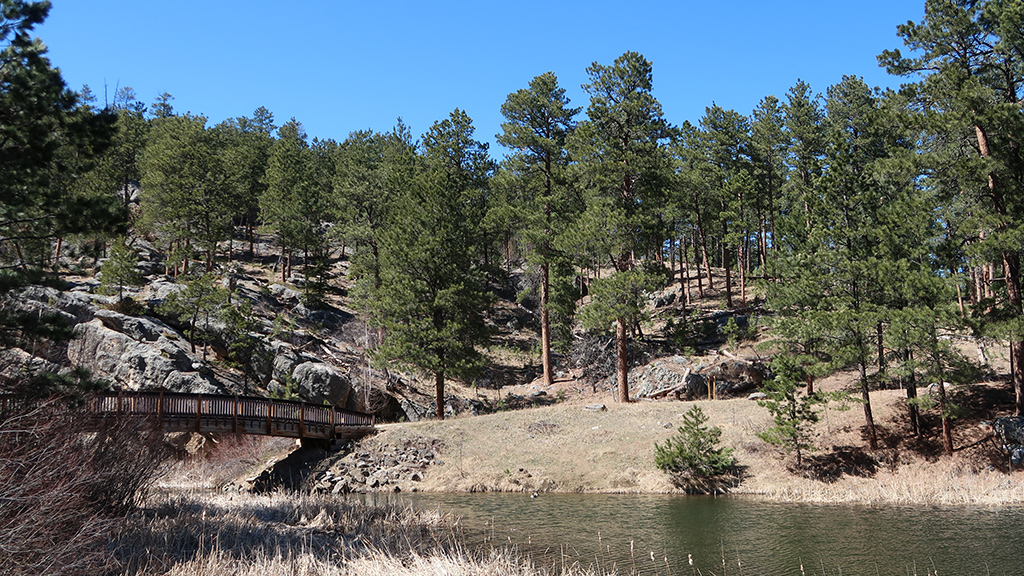 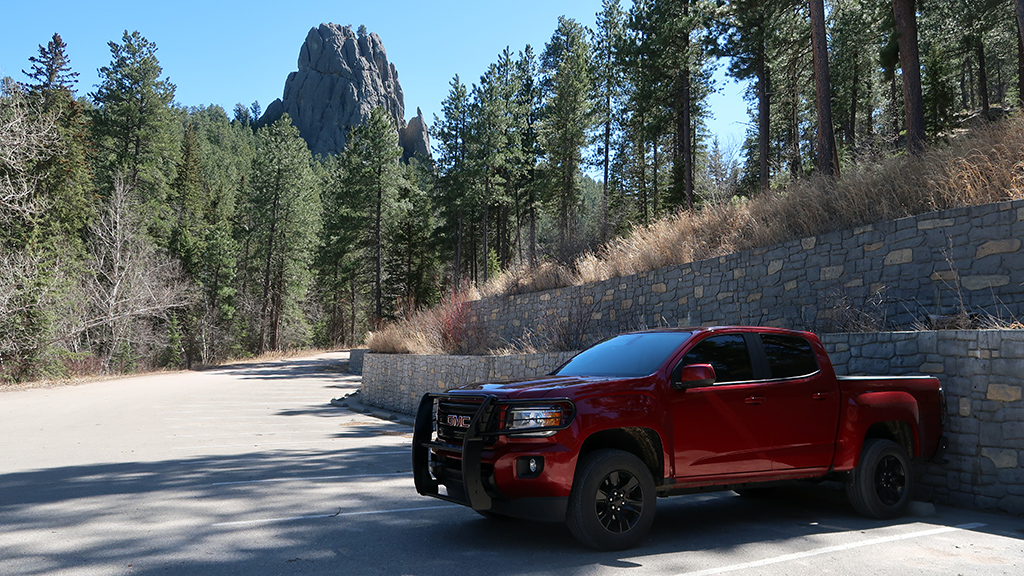 My stay in Rapid City was unreasonably, unmanageably windy and cold, so I didn’t have much of an opportunity to go out and do everything I wanted to do. However, what I did manage to do in the Black Hills was great.

If you plan a vacation around Mount Rushmore in addition to stops at places like Crazy Horse, various hiking trails in the Black Hills, the scenic drives around Sylvan Lake, and maybe even some of the mines or the Presidential Wax Museum in Keystone, then that would make for a far more complete day than just going to only Mount Rushmore.