My ammunition of choice for self-defense is the Federal Premium Law Enforcement Tactical HST 9mm Luger. Because it’s designed for law en­force­ment, you won’t just find it for sale at your local gun store, so I have to order it online. (If you want to get your hands on some as well, the Personal De­fense HST is effectively the same ammunition, but much more readily available to the public.)

Of course, ordering online means shipping, and my supplier sent me the ammunition via FedEx. The package arrived fine at my condo’s receiving area, but then it went on a mysterious adventure…

My condo’s homeowners’ association has been hiring quite a few new people lately. That, coupled with the fact that there is literally a global pandemic right now, and people are trying to streamline things to minimize social contact. The security for package distribution has gone down significantly—not only do the new people not recognize all the residents, but ID checks and signatures are also being waived so people won’t have to interact for as long.

I have no clue what the motive was, but a resident who lives in the other wing of my floor apparently decided that the day after my ammunition arrived would be a great day to take someone else’s package.

Why had I not already picked up my package by the day after it arrived, you may ask? My ammunition arrived on a Friday, but I had an Amazon package scheduled to arrive on the following Monday, so I figured I would just go down to concierge on Monday and pick up both in one shot—for the sake of minimizing person-to-person exposure, obviously. I very rarely do this, but I guess this was a very unlucky time for me to choose to do this.

On Monday, I went down to concierge and let a new guy know that I had two packages. He said that he could only find one—my Amazon package that had arrived that day—and told me to come back when the manager was available again so he could look into the other one. I checked in an hour later upon the manager’s arrival, and he stated that my FedEx package from Friday—the one containing 100 bullets—had already been picked up.

Thus ensued an investigation where the homeowners’ association, concierge, and property management company looked through security footage to find out what exactly had happened to my ammunition. Luckily, I live in a luxury high-rise condominium so the security in the building is extremely tight, and the concierge has strict inventory processes and procedures. So, they were actually able to pinpoint on exactly what day and what time my pack­age was taken; they also easily identified the resident who walked away with my package.

At first, the resident seemed cooperative. By the time we had discovered the package had been given to the wrong person, that resident had already gone out of town. However, he permitted concierge to enter his unit and take the package from his kitchen counter. So concierge went into his unit to retrieve the package… and it wasn’t there.

That’s fine, though—maybe that resident just thought it was on his kitchen counter but had actually already moved it, or maybe concierge just couldn’t find it. We waited until the resident came back from his trip. … This is where things start getting strange.

“I don’t have the package, and I never picked it up. What do you want from me, old woman?”

Apparently that was the resident’s response when the manager of the concierge team followed up with him about the package he took that wasn’t his. He had altered his strategy since when we first discovered he was the one who took my package. His cooperation turned into feigned ignorance, and he be­gan acting like he had absolutely nothing to do with the missing package.

It shall be unlawful for any person to receive, possess, conceal, store, barter, sell, or dispose of any stolen firearm or stolen ammunition, or pledge or accept as security for a loan any stolen firearm or stolen ammunition, which is moving as, which is a part of, which constitutes, or which has been shipped or transported in, interstate or foreign commerce, either before or after it was stolen, knowing or having reasonable cause to believe that the firearm or ammunition was stolen.

Surely, the other resident knew the ammunition was stolen—by himself—because the recipient and unit number on the package clearly was not him. My supplier is based out of the Southeast, so there was definitely interstate transportation. He had just committed a federal offense.

The concierge manager asked me to call the police.

An officer from the Las Vegas Metropolitan Police Department came for a visit to take a report. I gave him a quick summary of what had happened, then referred him to the concierge staff, who had a folder of evidence ready for him.

From here, I’m not entirely sure what happened, because I wasn’t directly involved in the officer’s conversation with concierge. I suspect it was a com­bi­na­tion of unclear evidence, overexplaining, and uncertain recounts of what had happened, but ultimately, the officer concluded that there was in­suf­fi­cient probable cause to make an arrest, and there definitely was not evidence beyond a reasonable doubt for there to be a conviction.

The main hold-up seems to be that there is no clear proof that the package the other resident walked away with was my package. Sure, the dimensions were the same, and my package was the one that was logged in the system as “picked up” at the same exact moment that he received that package, but all of that is deductive evidence. The security camera wasn’t clear enough that the package in his hands clearly showed my name and my unit number on it.

Regardless, a police report was filed, and a detective would be assigned to the case to investigate further.

The concierge company contracted by my homeowners’ association ultimately took responsibility for the error and agreed to reimburse me for the cost of the ammunition. Now that I was made “whole” and it was concierge that took the financial loss from the larceny, they were the new victims in the case, and it would be up to them to pursue further charges against that resident if they wanted.

I’m obviously definitely going to help them out if they need my assistance, in the scenario where they do choose to pursue charges—which I’m unsure as to whether or not they will do. However, the one thing that I am sure about is that I’m no longer going to let packages sit at concierge anymore. 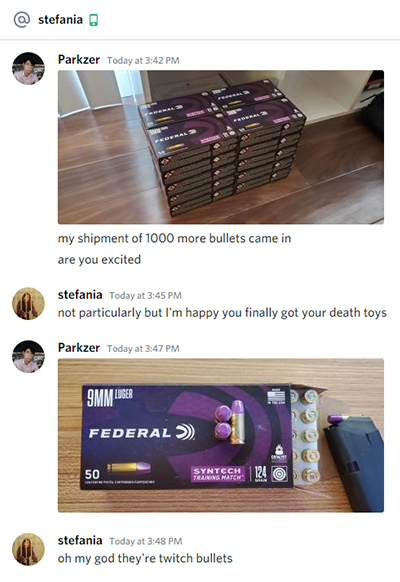 Since then, I repurchased a replacement set of Law Enforcement Tactical HST ammo, as well as 20 boxes of training rounds. Luckily, both packages are in my possession without incident, the larger shipment of which just arrived today.

If you do end up going with the Personal Defense HST ammunition that I linked above, I recommend going for the purple-tipped ammo pictured above for training—the Fed­er­al Premium Syntech Training Match 9mm Luger.

It’s always a great idea to train with the ammunition you would use in a self-defense sit­u­a­tion, but that can get pricey with hollow-point rounds. The Syntech Training Match se­ries is designed to emulate exactly what it feels like to fire personal defense rounds—down to the velocity, trajectory, and point of impact—but at only a third or so of the cost.

I’m not going to say that this necessarily applies to everyone, but I firmly believe in the idea that people don’t actually rise to the occasion, but rather, fall to the level of their training. Sure, you can get round-nose bullets for cheaper than synthetics, but I think it’s worth the extra bit of cash to provide yourself with the best possible training, especially if it’s in preparation for a life-or-death situation.

(If you don’t understand the screenshot to the right, that is taken from a conversation with one of my co-workers. She lives in Europe and isn’t particularly a gun enthusiast, so she presumably has never seen synthetic ammunition with colored tips, and called them “Twitch bullets.”)